Please log in to keep reading.
Enjoy unlimited articles at one of our lowest prices ever.
You have permission to edit this article.
Edit

After a year of financial precariousness for so many, those who have the means may be setting 2021 money resolutions to get back on track. According to a new survey commissioned by NerdWallet and Marcus by Goldman Sachs and conducted online by The Harris Poll among over 3,000 U.S. adults, close to 4 in 5 Americans (78%) report that the pandemic spurred them to take financial action. 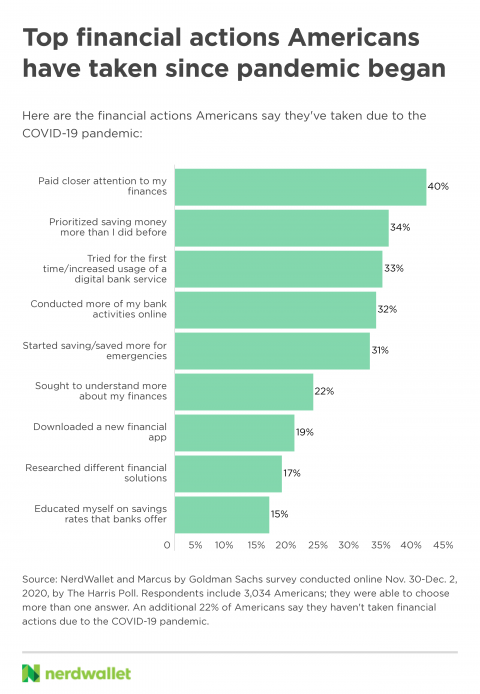 Here's how you can use these money moves to jump-start your 2021 goals.

Two in 5 Americans (40%) say they’ve paid closer attention to their finances due to the pandemic — a good habit for everyone to get into, regardless of income. An eye-opening way to get started is to track every dollar you spend for one to three months. Once you’ve got a number, you can determine if that’s how much you want to be spending. Maybe you're spending exactly how you like on exactly what you like, but for many of us, budgeting can be the key to aligning our spending habits with our priorities.

Not sure where to start? The 50/30/20 budget is a smart and simple way to allocate your income to your expenses: 50% of your take-home pay for needs, 30% for wants and the final 20% for savings and debt repayment. This approach may not work for everyone — for instance, those in areas with a high cost of living may struggle to use only half of their income on needs — but it’s a good goal to work toward.

2. Do more of your banking online

Online-only banks aren’t the only ones that offer online services. Many brick-and-mortar banks have apps and websites that allow customers to do most, if not all, of their banking from their computer or phone.

Concerned about security? Avoid unsecured Wi-Fi networks when logging in to your bank accounts, use two-factor authentication and make sure the online bank monitors for fraudulent activity.

If you opt to switch to a more tech-savvy bank this year, look for one with low or no fees and high interest rates. As rates are currently near historic lows, you may not find something game-changing; however, past trends indicate that they'll go back up as the economy recovers. Rates offered by online banks in particular tend to be higher than the current national average savings rate. (The Federal Deposit Insurance Corp. defines the "national rate" as a simple average of rates paid by U.S. depository institutions as calculated by the FDIC.)

Over a third of Americans (34%) say they’ve prioritized saving money more than they did before the pandemic, and 31% of Americans say the pandemic caused them to start saving or save more for emergencies since its onset. In fact, according to a recent consumer sentiment survey from Marcus by Goldman Sachs, compared to their current behavior, more than a third (34%) of Americans think they will save more during the next six months.

Whether you have a specific goal, like a down payment on a home or a sturdier emergency fund, or you just want to give yourself options in the future, consistently saving money is a good practice. Not only does it help you reach a goal, but it also means you’re spending less than you make, so you’ll be better able to handle an unexpected hit to your finances.

You can use the 50/30/20 budget to figure out how much money you can allocate toward your goal, taking into account your debt payoff plans. For short- to medium-term savings goals, a savings account could be the ideal place to store your cash. Investing money for shorter-term goals carries much more risk, so while growth will be slower in a savings account, your money will be there when you need it.

If your goal is saving up an emergency fund as a bulwark against financial turmoil down the road, a good strategy is to work toward setting aside three to six months’ worth of expenses. Start small: Aim to save $500 or $1,000 first and then go from there. It may take several years to get up to a half year’s worth of expenses in your account, and that’s OK. Save consistently and consider allocating windfalls — like tax refunds or rebates — toward hitting your emergency fund goal even sooner.

The Consumer Sentiment Survey was conducted by Marcus by Goldman Sachs in December 2020 among 1,502 Americans.

The article 3 Money Habits to Carry Forward From the Pandemic Era originally appeared on NerdWallet.

Covid Vaccinations and the Pursuit of Herd Immunity

Enrollment at US community colleges plummets amid pandemic, and other top stories in business from February 21, 2021.

Enrollment at US community colleges plummets amid pandemic, and other top stories in business from February 21, 2021.

With a weekly newsletter looking back at local history.

This week's money tips: 3 habits to carry forward from the pandemic era

Also, check out more of this week's best personal finance reads from experts at NerdWallet, Forbes and The Motley Fool, as well as our new podcast, PennyWise.