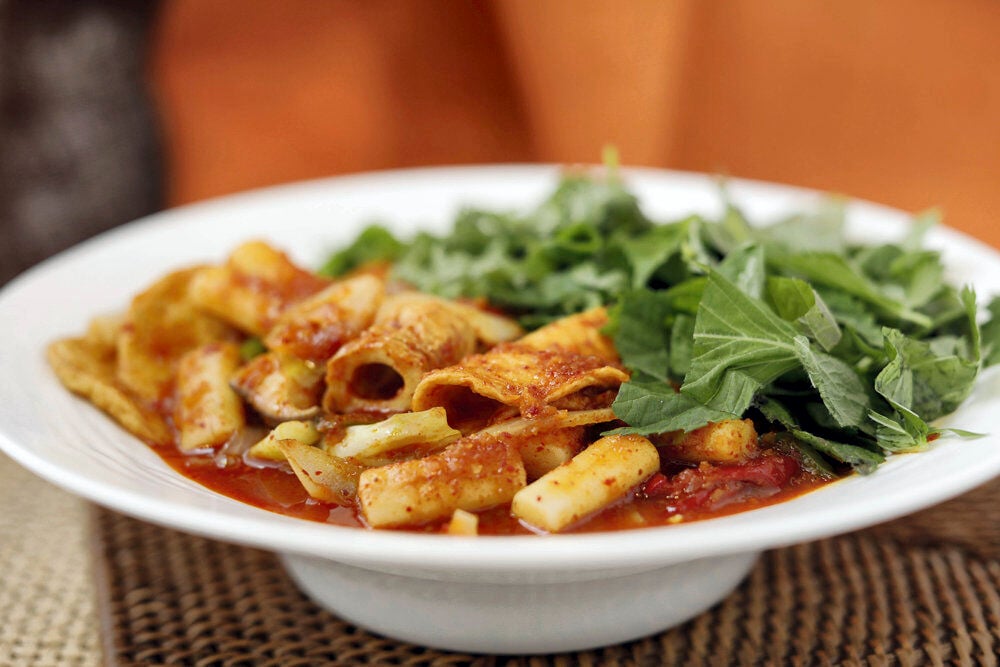 Tteokbokki is a spicy Korean rice cake dish usually made during the holidays but can be served any time. (Myung J. Chun/Los Angeles Times/TNS) 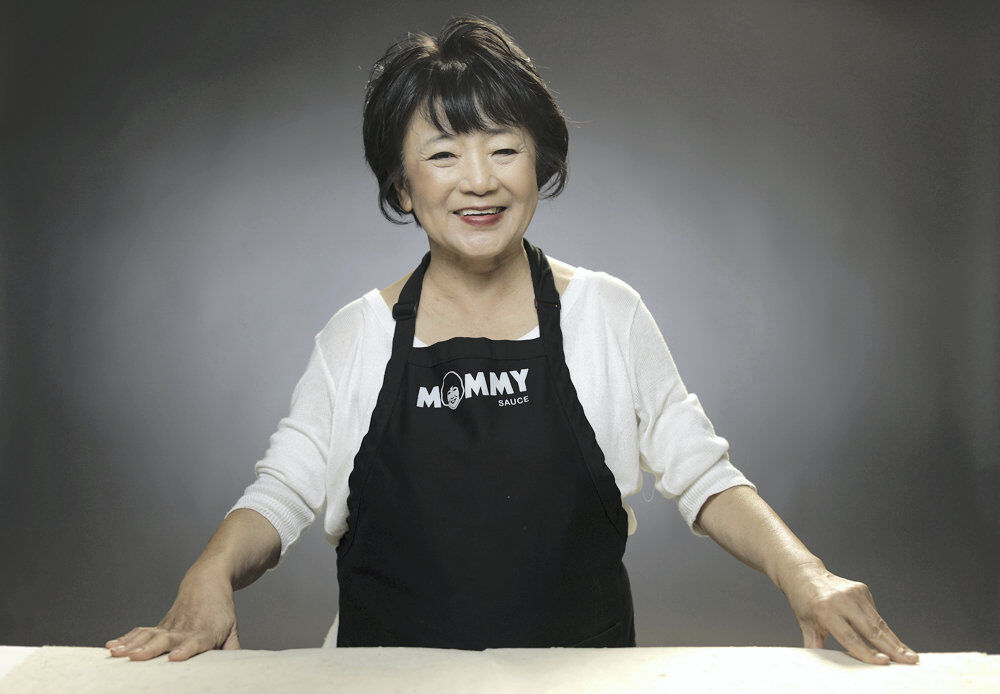 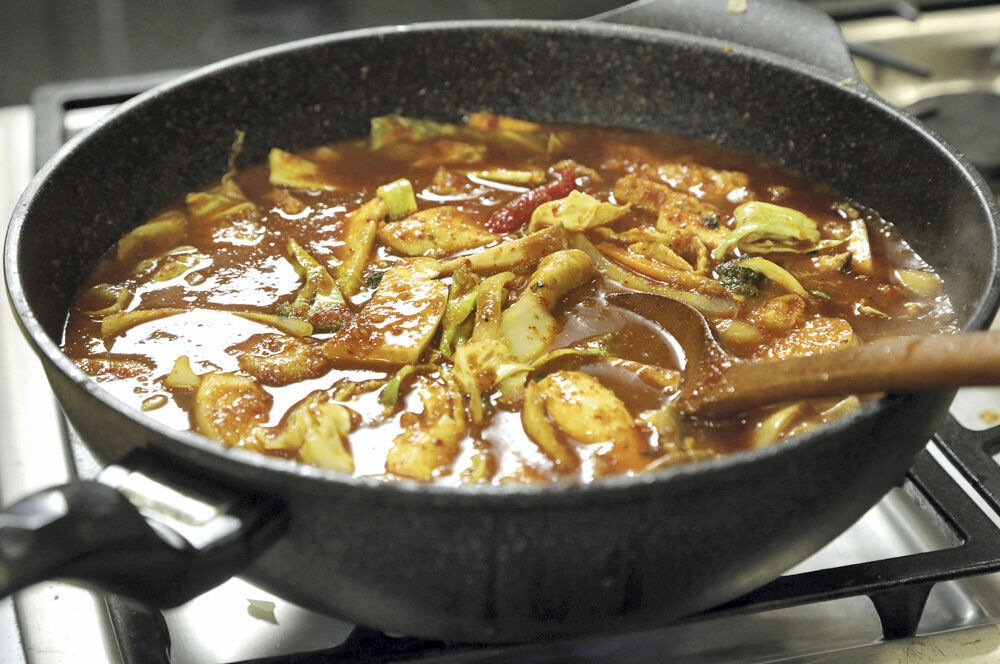 Tteokbokki is a spicy Korean rice cake dish usually made during the holidays but can be served any time. (Myung J. Chun/Los Angeles Times/TNS)

LOS ANGELES — “Roy’s never been here?” Jai Nam Choi asks, surprised, as she walks into the L.A. Times Test Kitchen. “Oh, I have to look around.” She breaks into the widest smile.

Jai, who prefers to be called Mommy Choi or simply Mommy, is no stranger to cooking. She spent most of her life working in the jewelry industry, but she’s found a second career selling Mommy Sauce, a line of Korean-inspired sauces that includes kimchi, bulgogi, spicy bulgogi and “magic,” an all-purpose sweetened soy sauce blend with notes of garlic, onion, ginger and black pepper. “It’s good on everything,” she says.

Getting everything ready for the demonstration is a family affair. Soo unpacks ingredients while Hawkinson touches up her mother’s hair and makeup, and helps her put on her Mommy Sauce-branded apron.

“Today, I’m going to make tteokbokki. Tteok means rice cake. And bokki means stir-fry,” Mommy says. “When I was a child, we made it at home for the holidays, but now it’s a popular dish in restaurants, and even on the street.”

Mommy carefully arranges some beef broth, soy sauce, fragrant sesame oil, spices and other ingredients to make the sauces she will use before assembling the final tteokbokki dish.

“I’m giving you the recipes. I didn’t give them yet to Julie,” she says. “Julie, pay attention.”

Hawkinson, a lawyer, is married, with her own children, and she wants her mother’s recipes so she can pass them on to her kids one day.

“My mom loves making sauces. I guess it started with her ‘magic’ sauce,” Hawkinson says. “It’s sweet, spicy, salty and you can use it as a base for anything you want.” Her mother would put it in little tubs and give it to her sisters and friends — anybody. “She’s been making them as long as I’ve been alive.”

As she starts cooking, Mommy demonstrates a homemade bulgogi sauce base (a rich marinade often used with grilled or stir-fried meats). It’s a fragrant blend of soy sauce and fish sauce, fresh ginger and garlic, toasted sesame seeds and a touch of sugar. Bringing everything to a boil, Mommy stirs in beef broth, pineapple juice and cooking wine.

To make spicy bulgogi sauce, she adds a dollop of gochujang, Korean chile paste, and a hefty scoop of gochugaru, Korean ground chile powder. She stirs, bringing the mixture to a boil. “This is done,” says Mommy. “You can use the spicy sauce with pork or chicken or even with noodles.”

“Now for the tteokbokki sauce,” says Mommy. Soo prepares the wok and cleans the cooking station as Mommy chops onion and kabocha squash.

“My parents do everything together,” Hawkinson says. “From the moment they wake up until they go to bed. They even worked at the jewelry store together. It’s so sweet. I remember coming home and they’d be upstairs laughing.”

“When did you get married again?” Hawkinson asks her mother.

After she stir-fries the onion, she blends it with the raw squash before adding it to the spicy bulgogi sauce, bringing the thick sauce to a boil. This is the sauce she will use for the tteokbokki.

“I know,” Mommy responds. “But I had it and thought it might be good, adding some sweetness.”

Ready to assemble the final dish, Mommy begins chopping more onion, some trumpet mushrooms, broccoli and cabbage. “Use whatever you have in the fridge,” she says. She unthreads fish cakes from wooden skewers, chopping them as well.

She stir-fries the ingredients, ladling in enough sauce to coat. “You can add more sauce if you like soupy tteokbokki,” she says. As she garnishes the rice cakes with fresh herbs — cilantro, shiso, mint and sesame leaves — she explains her love of cooking.

“I grew up with nine sisters and two brothers. My mother had a dress shop, and we lived on the fifth floor of the building in Myeong-dong in Seoul. We had a big kitchen and many cooks. I always played in the kitchen, and talked with the cooks.”

After moving to the United States, she met her husband and was married at 25. Together they ran a jewelry business, but she loved to cook and throw parties. It wasn’t until she retired that she realized her real passion was cooking. “I was around 70 when I found out that cooking is my hobby,” she says. “Some people die never knowing what they really like. I’m lucky.”

After her kids moved out and she left the jewelry business, it wasn’t long before she grew tired with retirement. “Every day it was killing time watching TV and going to shopping centers. It’s so boring.”

Mommy had already been making and giving away her sauces to friends and family, so she decided to turn it into a business.

“I have a son, a famous chef. I have a daughter who is a lawyer. My husband is a business major. I have everybody I need,” says Mommy. “And I’m a business lady. “

After Mommy and her dish are shot in the photo studio, she returns to the kitchen. “I have to make more food,” she says, pointing out the Test Kitchen window that looks onto the newsroom. “I want to feed everybody!”

Soon, reporters and Times staff have formed a line. As she serves them, Mommy’s beaming. “I’m having so much fun. This is like a party!”

Make the bulgogi sauce: In a large saucepan, combine the soy sauce, fish sauce, ginger, garlic, pepper, sesame seeds and 2 tablespoons sugar and bring to a simmer. Add the beef broth, pineapple juice and wine and bring to a boil.

To make spicy bulgogi sauce, stir in the hot red bean paste and chile pepper, along with the sesame oil and bring to a boil. Taste and adjust the sweetness and flavors if desired.

This makes a generous 3 cups sauce.

Heat a wok over high heat until hot. Add the oil, then the onion, and stir-fry until the onion is tender and begins to brown, 5 to 7 minutes. Remove from heat and place the onion in a blender. Add the beef broth, then the chopped squash and purée.

Place the onion and squash purée in the pan with the spicy bulgogi sauce and bring to a boil. This makes a generous quart tteokbokki sauce.

Bring the tteokbokki sauce to a simmer.

Heat a wok over high heat. Add a thin film of oil, then the chiles, stirring frequently. Add the onion, cabbage, and broccoli, stirring constantly until the vegetables brighten in color and are crisp-tender. Stir in the fish cakes and mushrooms, then the rice cakes.

Ladle in the hot sauce, stirring to generously coat (for more of a soup-like dish, add additional sauce). Continue cooking, stirring frequently, until the sauce comes to a boil. Remove from heat and place in a large serving bowl, mounding the herbs on one side of the bowl so guests can garnish their servings as desired. Serve immediately.

Adapted from a recipe by Jai Nam Choi

Noelle Carter is the former Test Kitchen director for the Los Angeles Times. Currently she is a culinary consultant and recipe developer for a variety of clients. Follow her on Twitter at @noellecarter or check out her website at www.noellecarterfood.com