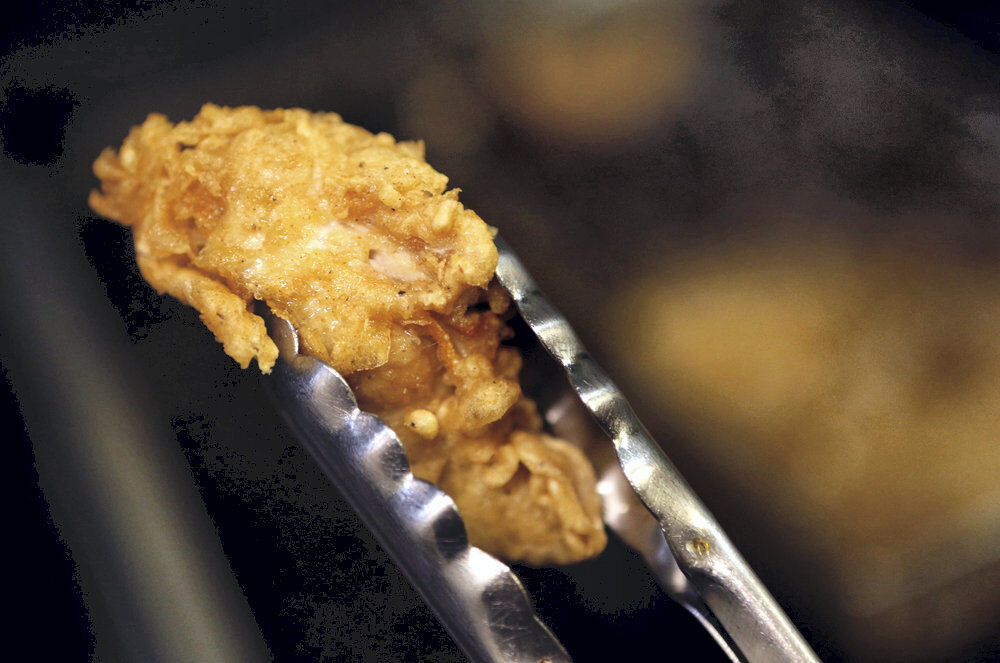 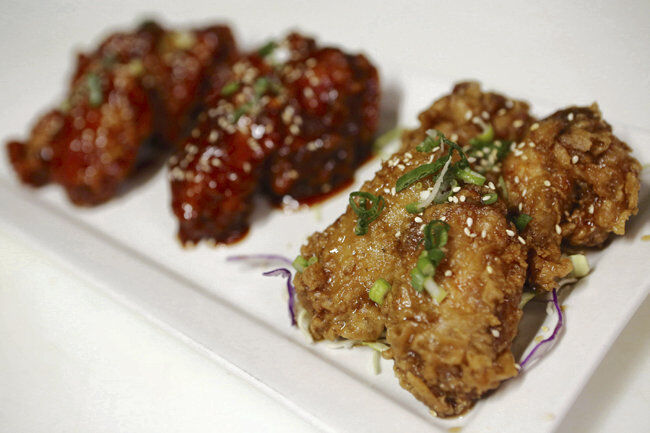 Soy garlic (from right), sweet garlic #2 and sweet garlic #1 chicken wings are on the menu at Hot ‘n’ Sweet Chicken in Arcadia, Calif. Chef Nami Nakaganeku makes her famous wings at the restaurant, which she owns with her husband, Aldo Nakaganeku. (Genaro Molina/Los Angeles Times/TNS) 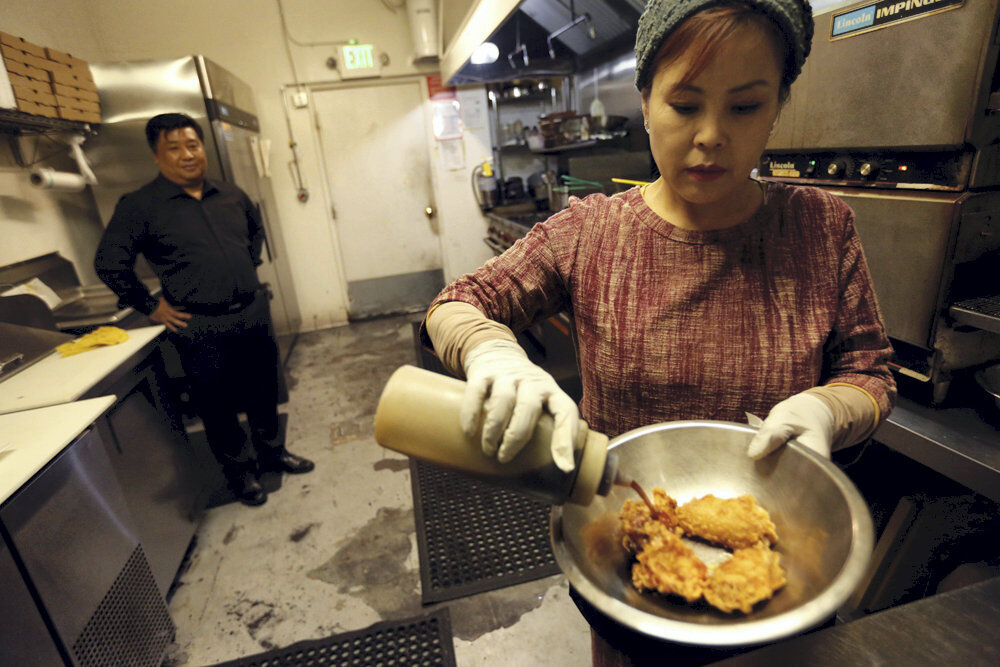 Soy garlic (from right), sweet garlic #2 and sweet garlic #1 chicken wings are on the menu at Hot ‘n’ Sweet Chicken in Arcadia, Calif. Chef Nami Nakaganeku makes her famous wings at the restaurant, which she owns with her husband, Aldo Nakaganeku. (Genaro Molina/Los Angeles Times/TNS)

LOS ANGELES — If you’re a fan of KFC wings — the kind lashed with Korean hot sauce rather than the Southern-style from a certain fast food chain — you may think of them as just a form of basic sustenance.

You spend your evenings cooling the burn of lip-scalding wings with frosty mugs of Hite, while bobbing your head to blaring K-pop in crowded dining rooms. By the third round of beer, you should be ready to sing “Bang Bang Bang” by Bigbang at post-dinner karaoke.

But stick to that and you’re missing something special.

Aldo and Nami Nakaganeku opened Hot ‘n’ Sweet Chicken in Arcadia, Calif., in 2013. The restaurant is on a sleepy stretch of Huntington Drive that includes a driving school, a healthcare supply store and a funeral home.

“There are really no Korean fried chicken places here like in Koreatown,” says Aldo. He is sitting next to his wife at a table in his restaurant. Kara’s “Mamma Mia”

Nami, born in South Korea, and Aldo, who is Japanese but was born in Argentina (he once worked as a cook and sushi chef at a restaurant in Anchorage), decided to open the type of restaurant you’d find in Seoul.

“In Korea, people eat wings like a snack, and most people eat them with beer,” says Aldo. “Thousands of people offer wings. It’s like Starbucks here.”

They’ve outfitted the restaurant with everything you’d crave from an outing in Koreatown. There’s Hite on tap, as well as soju; on the TVs there are Bigbang and Girls’ Generation music videos; and — most important — there’s KFC: Korean fried chicken.

Most of Nami’s experience in the kitchen came from decades of cooking for her family in South Korea and in the U.S. She and her husband developed the restaurant’s wing recipe after eating fried chicken in Korea, Singapore, Japan, Argentina, Brazil and, of all places, Canada (every place they traveled, they’d be sure to try the fried chicken). Then they spent five years experimenting and perfecting the wings they now serve at the restaurant.

Nami’s wings are not the thick-coated, ultra crisp, completely sauce-smothered wings you’ll find at OB Bear, a Koreatown site of pilgrimage for those who love wings. They’re also not the wings you’ll find at KyoChon, which taste a bit like they’ve been coated in breakfast rice cereal. Rather, the wings at Hot n Sweet fall somewhere in between. The coating is crisp and golden, light in texture, and when you take a bite, it shatters, then melts on your tongue.

That crisp, airy quality is similar to what you’d get if you dipped a wing in tempura batter — much lighter than the coating on the double-fried KFC you can find all over Koreatown. This distinct texture is achieved through Nami’s recipe — she uses a mix of cornstarch and flour in the batter — and the way she fries the chicken.

It’s a recent evening in their restaurant, and Nami is wearing a fuchsia turtleneck, pink arm warmers, a black apron and her hair tied neatly back with a black velvet bow. She stands over a large fryer in her kitchen, dropping battered chicken wings into the fryer. The oil is light in color, due to her switching it out almost every day after service.

She uses a gloved hand to drop each wing, one by one, into the fryer. (Aldo estimates that Nami makes and coats about 1,200 wings a week.) On contact, the oil seethes around the chicken. Wielding a large, slotted utensil, Nami pushes the chicken back and forth, continuously moving it around the bubbling pool.

After about five minutes, she takes what looks like a giant knitting needle and punctures each piece, once or twice in the oil. “This so chicken is done,” Nami says. She doesn’t use a timer. She moves the pieces around, lifts them out of the oil to check the color, then, about five minutes later, declares the wings cooked and ready for saucing.

Nami then coats the chicken in a bright, salty, soy garlic sauce — it’s made with a heady mixture of 15 ingredients, including sake and garlic. The sauce is thinner than a glaze, with a hint of ginger and that distinct sweetness that comes from sake or mirin. (You can eat a dozen without much effort.)

If soy garlic sauce seems a little too tame for you, Nami has four other sauces, labeled one to four in order of heat level. One is mild enough to keep a chile-head satisfied without getting teary-eyed — four is hot enough to stun someone who’s had a few too many Hites into a state that faintly resembles sobriety.

The couple shared a version of the soy-garlic chicken wing recipe, minus a few secret ingredients. For the full experience, you’ll have to go to Arcadia.

For the soy garlic sauce:

For the chicken batter:

For the soy garlic sauce: In a heavy-bottom saucepan, combine the corn syrup, soy sauce, water, sake, sugar, ginger and garlic. Bring to a boil, stirring occasionally, until it is reduced to 1 quart, about 20 minutes. Remove from heat and set aside.

For the chicken batter: In a large bowl, whisk together the flour, cornstarch, sea salt and pepper. Slowly whisk in the water to form a batter that has the consistency of cake batter (if the batter thickens too much, thin with additional water).

For the wings: Fill a 4-quart pot with frying oil to a depth of 3 to 4 inches. Heat the oil to maintain a temperature of 350 degrees F.

Working with a few pieces at a time, dip the chicken into the batter, shaking off any excess. Deep fry the pieces until the crust is golden-brown and the meat is thoroughly cooked, about 8 minutes. Drain the pieces on a rack and continue until all of the chicken is fried.

Toss the chicken in the soy garlic sauce (there may be some left over) and sprinkle with sesame seeds. Serve the chicken garnished with green onion.

Recipe adapted from: a recipe provided by