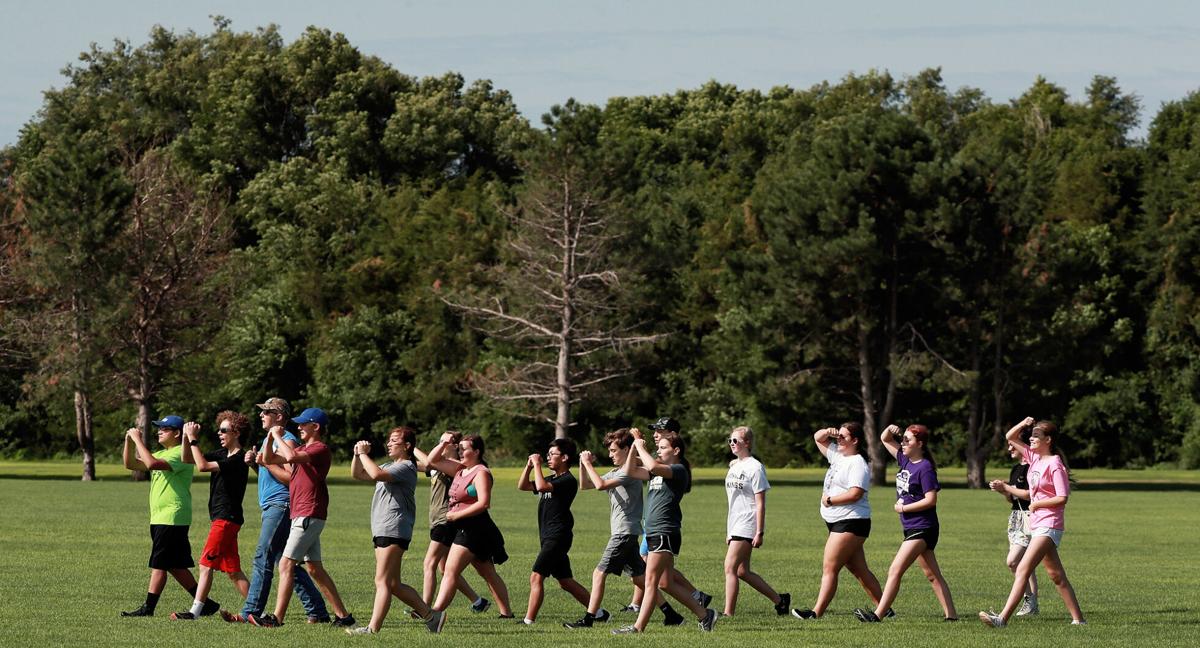 A group of Grand Island Northwest Band members work on the basic marching skills while participating in band camp Wednesday morning at the school. (Independent/Barrett Stinson) 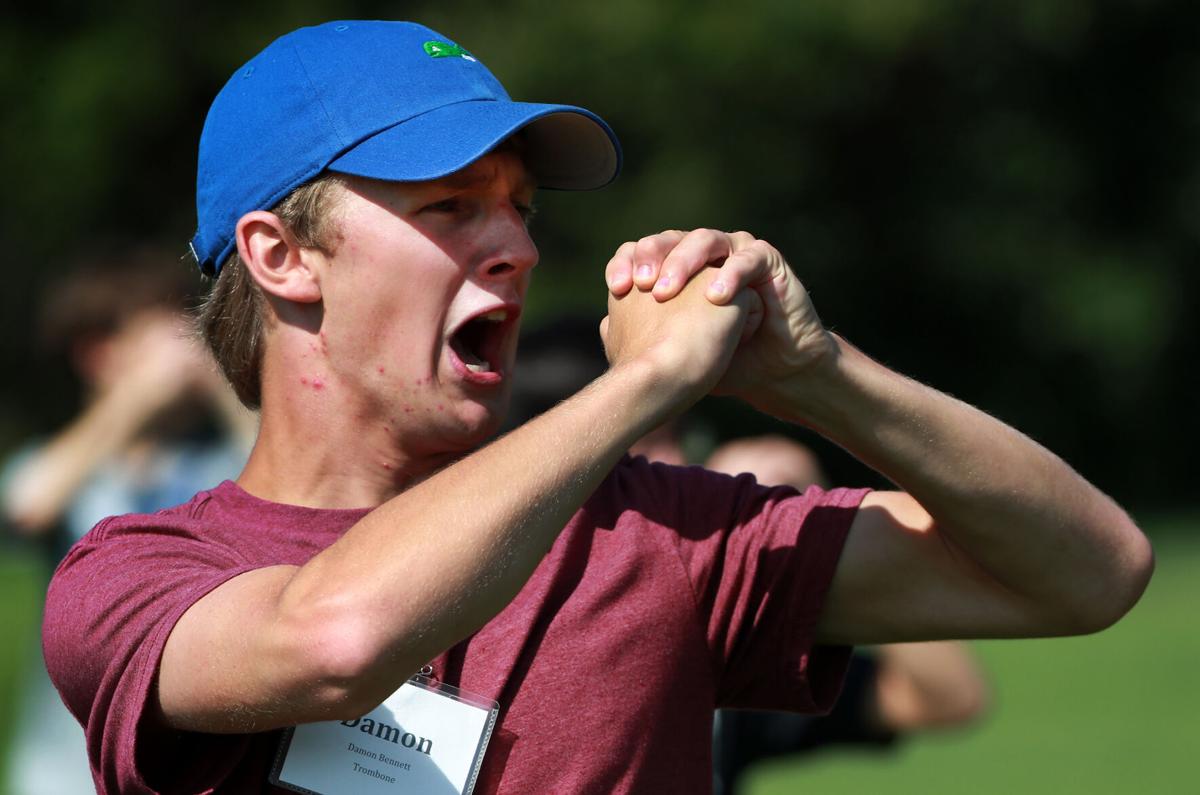 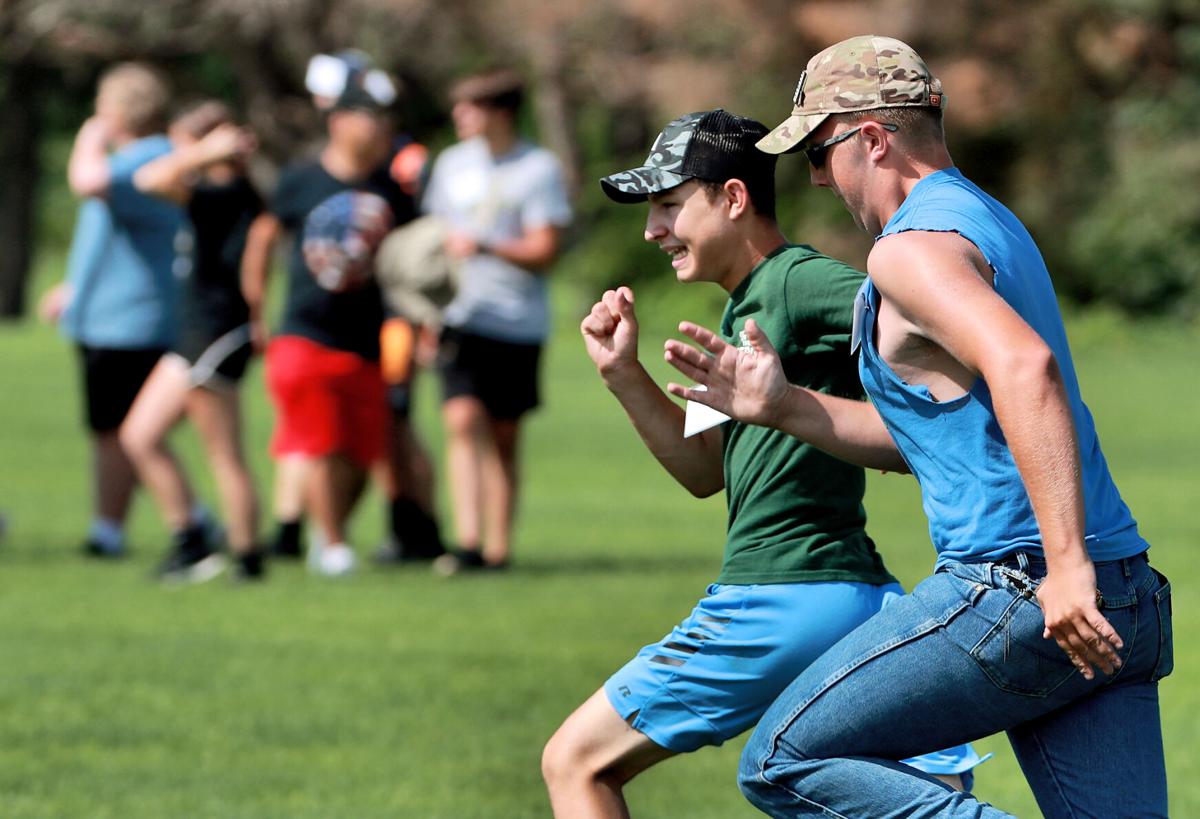 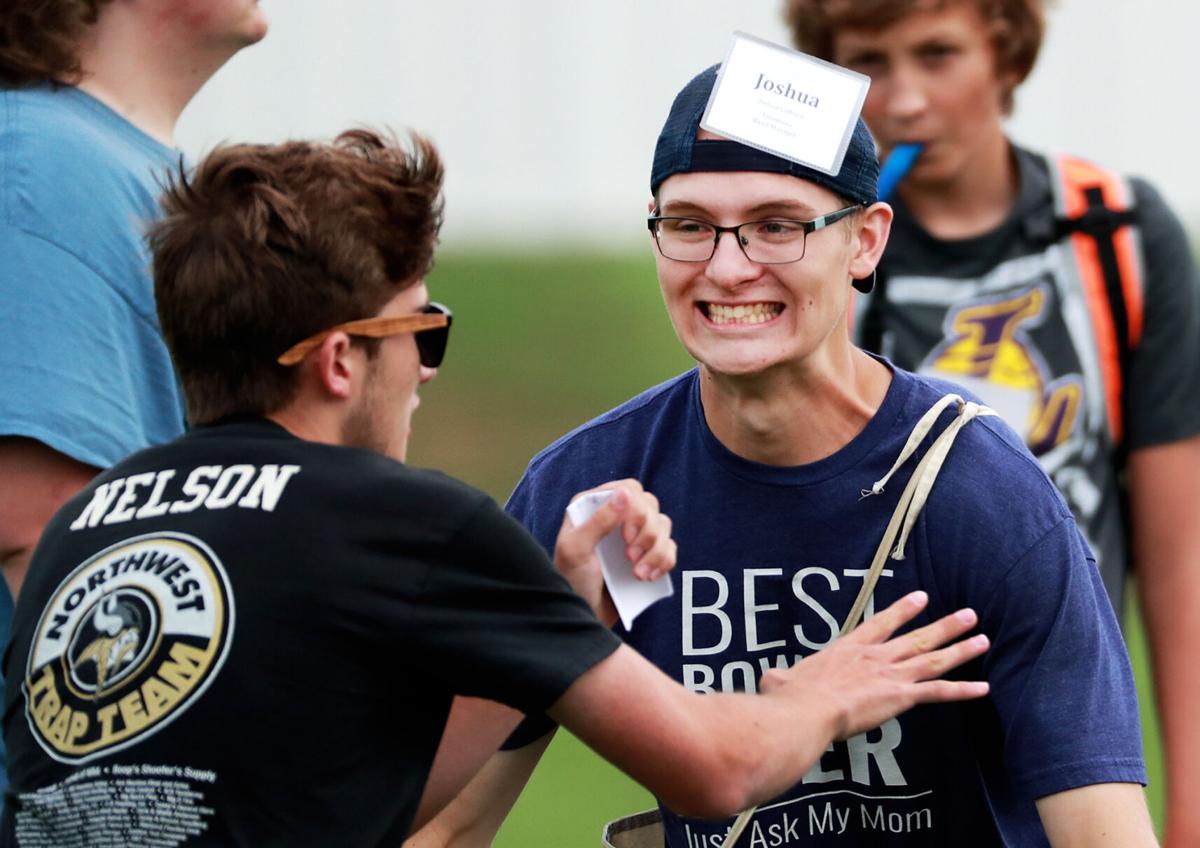 Before members of the Northwest High School marching band got together last week, most of the students hadn’t seen each other in four months.

When they tried out their instruments, the sound they produced wasn’t that great. But instrumental music teacher Shawn Pfanstiel was glad to hear them anyway.

“It was joyful because I hadn’t heard it in so long,” Pfanstiel said.

One of the students sharing in the joy was sophomore Autumn Graczyk.

“I really missed band,” said the tenor saxophonist. “We have such a family environment here. Everybody is just really accepted, and we help each other with everything. I’ve found a lot of my closest friends in high school from band.”

The Northwest students had been apart since March 12 because of COVID-19.

But some things aren’t a lot different. Much of the work is done outdoors, and band members “pretty much” socially distance already by staying four steps apart, said Grand Island Senior High band director John Jacobs. That distance is about seven and a half feet.

About three weeks ago, the GISH band got the OK to allow 25 students at time in the band room, providing they practice social distancing.

The smaller group size continues when the students go outside. The band has divided its 212 students into pods of 25 students, who rehearse, march and drill together. That way, if one of the students tests positive for the coronavirus, 25 students will be quarantined rather than 212.

At Northwest’s band camp, smaller groups have come in throughout the day for three or four years. Pfanstiel is trying to make sure the students “keep a little greater distance between each other when we’re inside and sanitizing hands and things like that more.”

Northwest had its first minicamp on Wednesday and Thursday of last week. The same schedule continues this week and next. A full camp will run Aug. 3-7.

The Northwest band usually numbers around 105. Seventy to 75 students are attending the minicamps. The small groups consist of 12 to 15 students.

Even when the full band is on the football field, Pfanstiel divides the group into separate stations.

Jacobs said during the pandemic, GISH band students are not sharing anything.

“We want the kids to touch only the things that are theirs,” he said. “That will include instruments and mouthpieces, valve oil and literally anything the students come in contact with.”

At the end of practices, students file into stations where mouthpieces are sanitized. The instruments will remain at school, Jacobs said.

If students hold onto their own instruments, “then things stay really pretty safe by the research that we’ve been able to find,” Pfanstiel said.

Normally, members of the Northwest color guard would pick up whichever flag is handy. But this year, each student has an assigned flag.

Whether the Northwest band takes part in any competitions this fall is up in the air.

“We have not heard from any competitions. So we don’t know if they’re on or off,” Pfanstiel said.

At this point, he’s assuming they’re on, and developing a plan in case they’re canceled.

“As far as a show perspective, usually we would do one kind of meaty competition show,” Pfanstiel said. “This year, our plan is to kind of do five smaller shows for our home football games. And that way, we have a different show for each game, more like a college band setup.”

That arrangement does have a silver lining. “Instead of pounding the same thing” for three or four months, the band will get to do a fresh show every two or three weeks, said Pfanstiel, who’s entering his 13th year at Northwest.

“I’m excited to see how different it is from normal years,” Graczyk said. The band will still march at football games. “So that’ll be nice to be able to show off what we can do. But not being able to go to competitions might be kind of sad.”

Marching hasn’t been a lot different.

“We just have to be more careful with how we’re standing and where we’re standing,” Graczyk said. But the fundamentals and everything else are “basically the same. Where we don’t have to wear masks, it makes it a lot easier.”

“Having people together playing music, it’s one of the best feelings ever — especially after not doing it for four months,” said Cline, a snare drum line captain.

During e-learning, Graczyk usually got her work done the second day after assignments were released, “so I had the rest of the week to myself.”

Graczyk, who tries to clean her tenor sax every day, said her mother is “kind of concerned about” her health. If she were to catch the virus, her mother worries about how it might affect her grandparents.

Tyler Koepp, who is the choir teacher at Grand Island Central Catholic, will have as many as 40 or 50 students in a room at the same time.

It will be difficult to determine how many “middle school boys with masks on” actually are singing, Koepp said. In addition, “that muffled sound that comes through that mask is going to make it really challenging for us to know if we’re actually making good sounds or not.”

But Koepp, like Jacobs, has a lot of faith in his school’s administrators to keep students and staff members safe.

BROKEN BOW — Best of show and champion 4-H entries in the Custer County Fair, organized by 4-H club, include:

What do you want to be when you grow up?

It is the infamous question. Before we are even old enough to fathom the length of our life after formal education, we are expected to know wh…

The Nebraska Department of Agriculture has announced the winners of NDA’s Poultry Photo Contest open to 4-H and FFA members from around the state.

A group of Grand Island Northwest Band members work on the basic marching skills while participating in band camp Wednesday morning at the school. (Independent/Barrett Stinson)