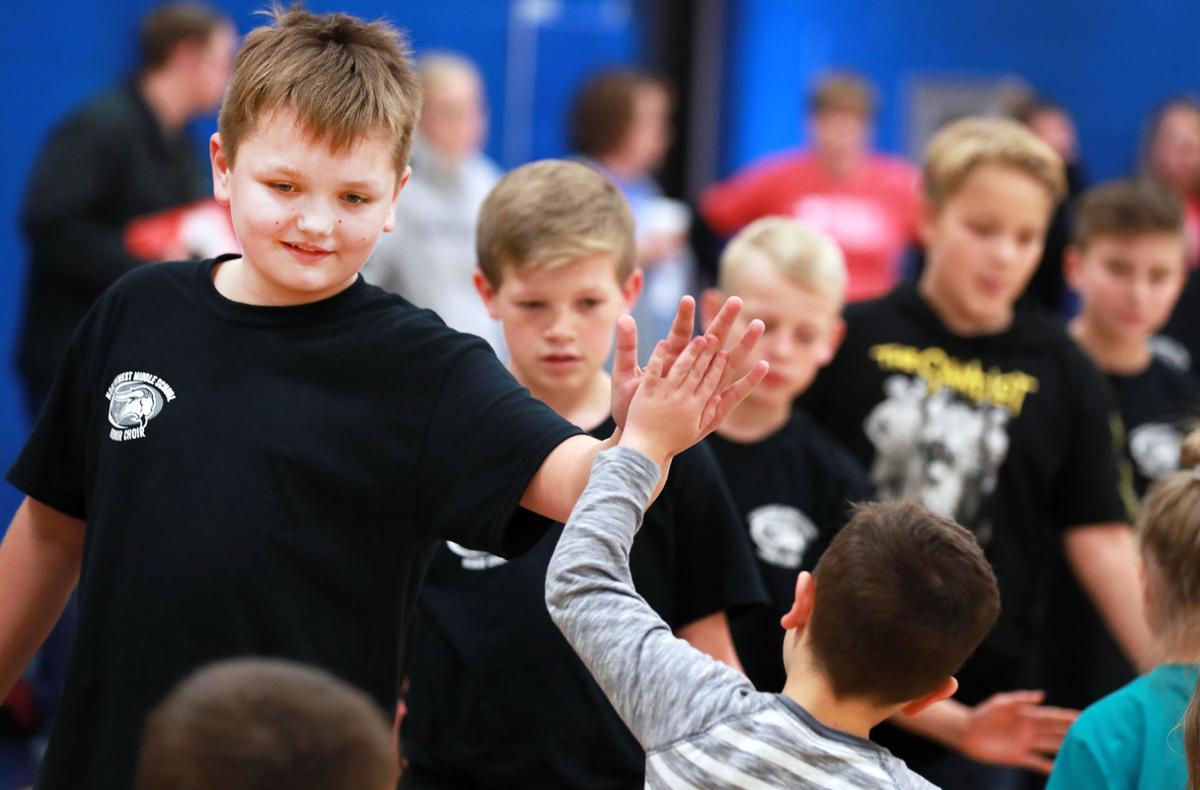 Before and after their performance, choir members, including 1-R School sixth-grader Ethan Lundgren (left), high-fived as many of the students as possible during a performance by the Grand Island Northwest Middle School boys honor choir Friday afternoon at Cedar Hollow Elementary School in Grand Island. (Independent/Barrett Stinson) 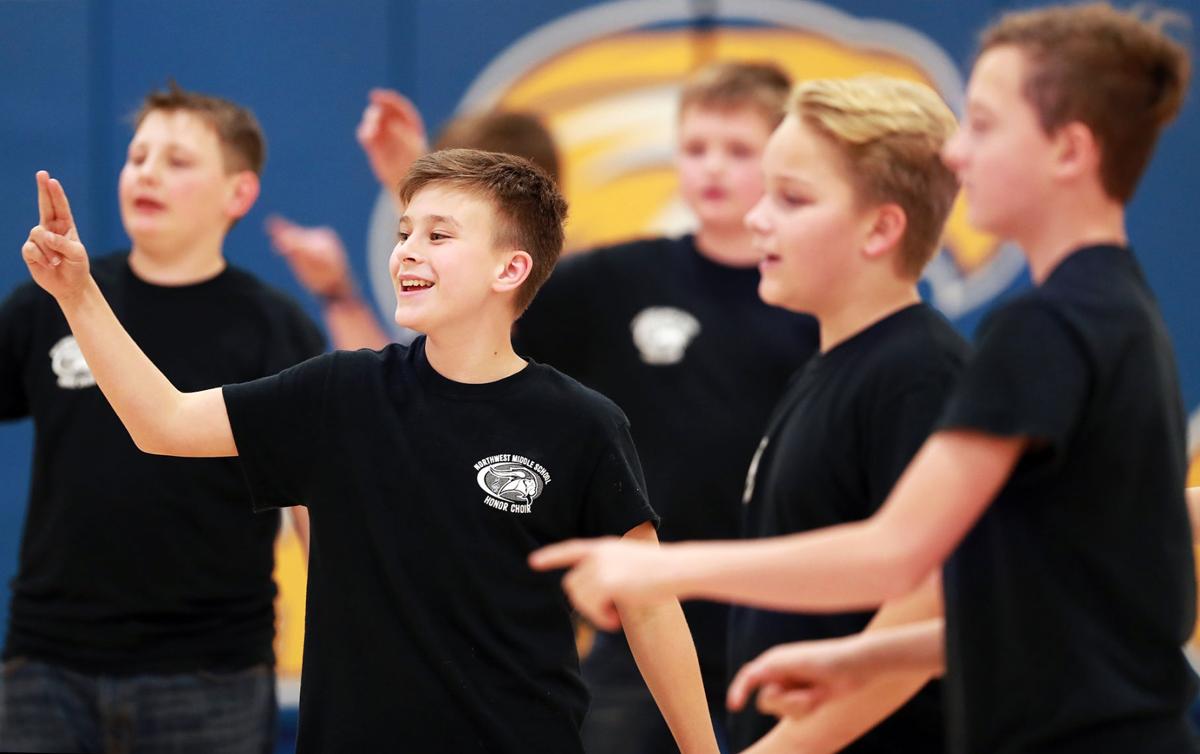 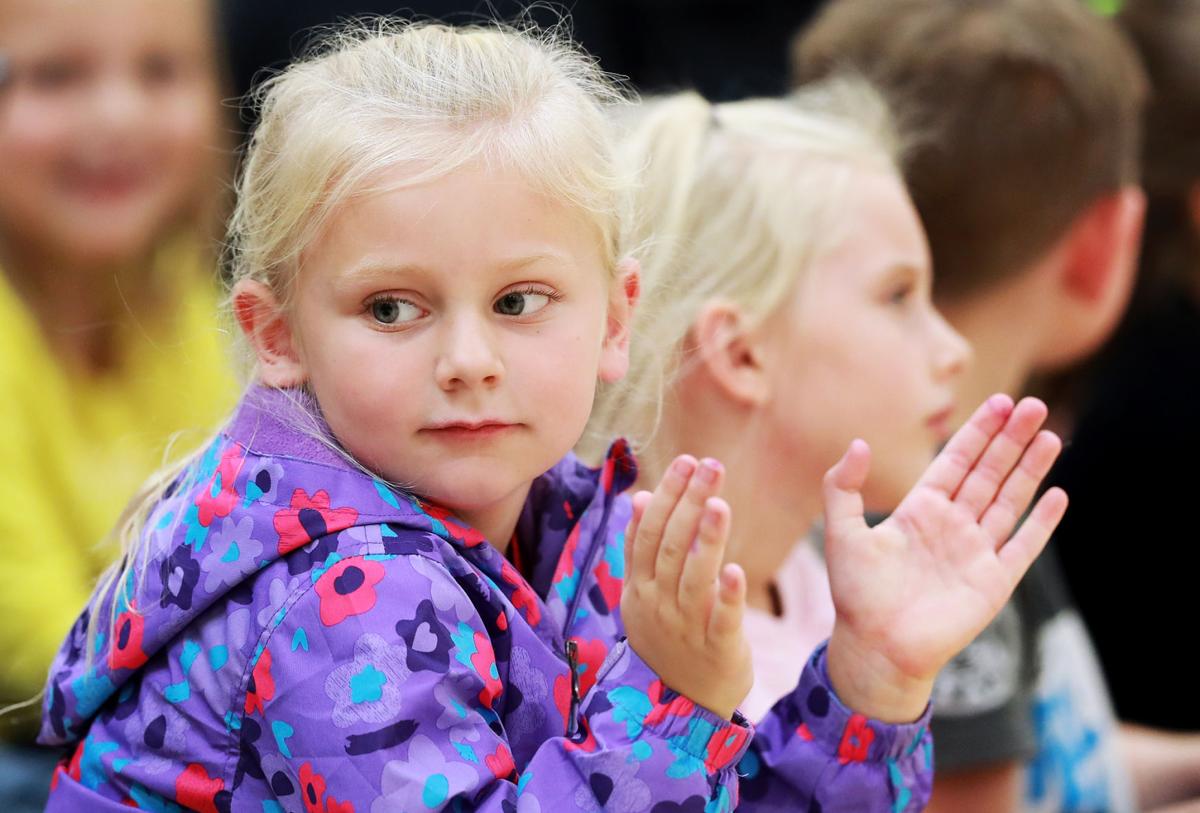 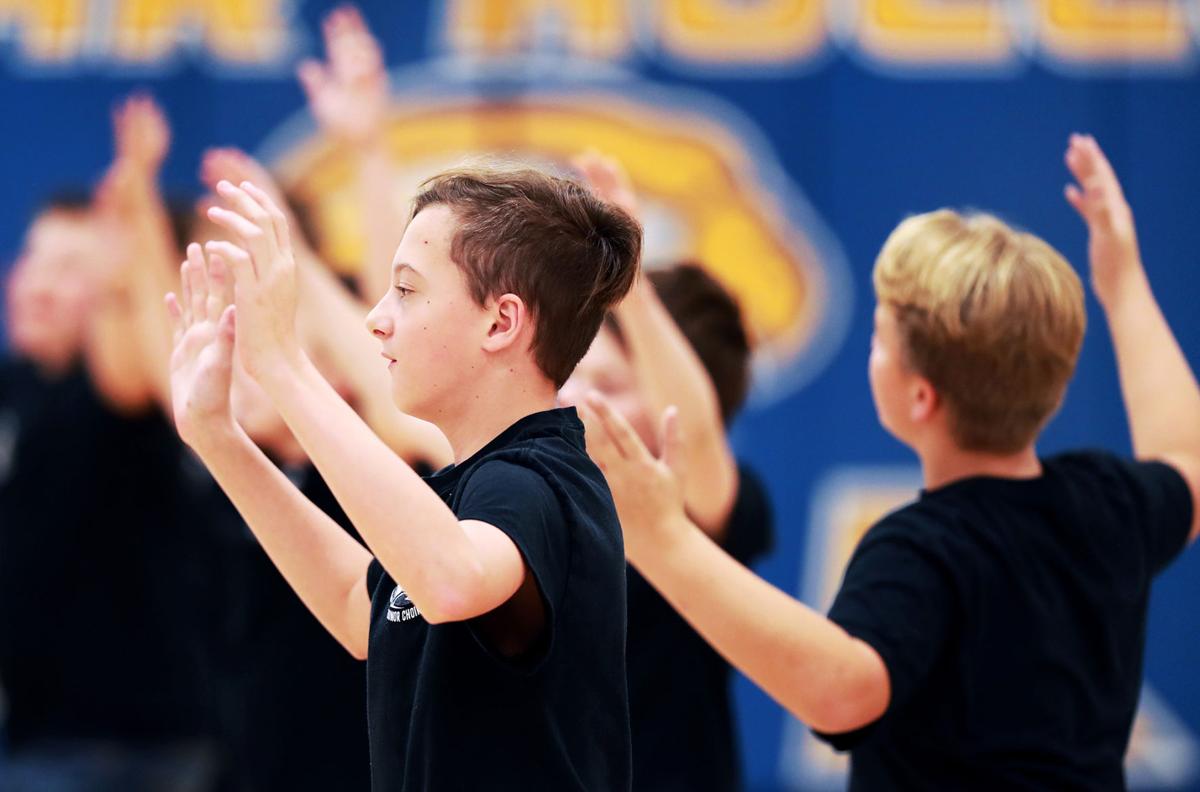 Before and after their performance, choir members, including 1-R School sixth-grader Ethan Lundgren (left), high-fived as many of the students as possible during a performance by the Grand Island Northwest Middle School boys honor choir Friday afternoon at Cedar Hollow Elementary School in Grand Island. (Independent/Barrett Stinson)

Alicia Glaser, a K-8 music teacher at Cedar Hollow who serves as the boys honor choir director, said the district has had an honor choir for the past few years. This is her first year as director.

The choir sang four songs during its tour Friday: “Believer” by Imagine Dragons, “Back Home” by Andy Grammer, “Bohemian Rhapsody” by Queen, and “High Hopes” by Panic! at the Disco.

“We tried to find current songs that students would pick up on quickly and that audience members would recognize,” Glaser said. “We also wanted to have songs that would show off the students’ vocal abilities and would go well with choreography. We tried to find a good mix there.”

Glaser said there was no audition process, and anyone who wanted to join the honor choir could do so.

The choir had seven rehearsals, lasting anywhere from 60 to 90 minutes, prior to Friday’s tour.

“It was a lot to fit in, but the students did a great job,” Glaser said. “We talked a lot about respect and using our time. They come in after a long day at school and they did awesome.”

She added she also placed materials on Google Classroom for students to use to practice at home.

1-R sixth-grader Andrew Schwarz said this was his first time participating in the middle-school boys honor choir. He said he decided to get involved after he saw the tour the last two years.

“My favorite part about honor choir is that I get to enjoy dancing and singing and being in front of a crowd of kindergarten through fifth-graders,” Schwarz said. “Practice was tiring. We practiced and practiced. We had to remember dances and where they were put in the songs.”

During performances, St. Libory seventh-grader Chris Smith sang a solo during “Bohemian Rhapsody” and did a number of backflips for the audience. He said he enjoys singing in front of crowds, so “it felt really good” to sing a solo.

Smith said he talked with Glaser and the tour’s choreographers about doing backflips as part of the tour’s performances. He said he wanted to make sure it was safe and OK for him to do them. Glaser approved of him doing the backflips and decided to work them into the tour performances.

Cedar Hollow eighth-grader Zach Cooley said this is his third year in the honor choir. He initially chose to get involved with the choir just to see what it was like. He said being a part of the choir has been fun, so he decided to participate in it again.

“There is a lot of singing, dancing and having a good time,” Cooley said. “It was really hard to remember all the songs since there are so many of them. You have to remember the lyrics and the dance.”

“They get so excited, especially when they get done,” she said. “They say how nervous they are and then afterwards, they ask you if you saw them do their solo. Seeing them give high-fives to the younger kids is awesome as well.”