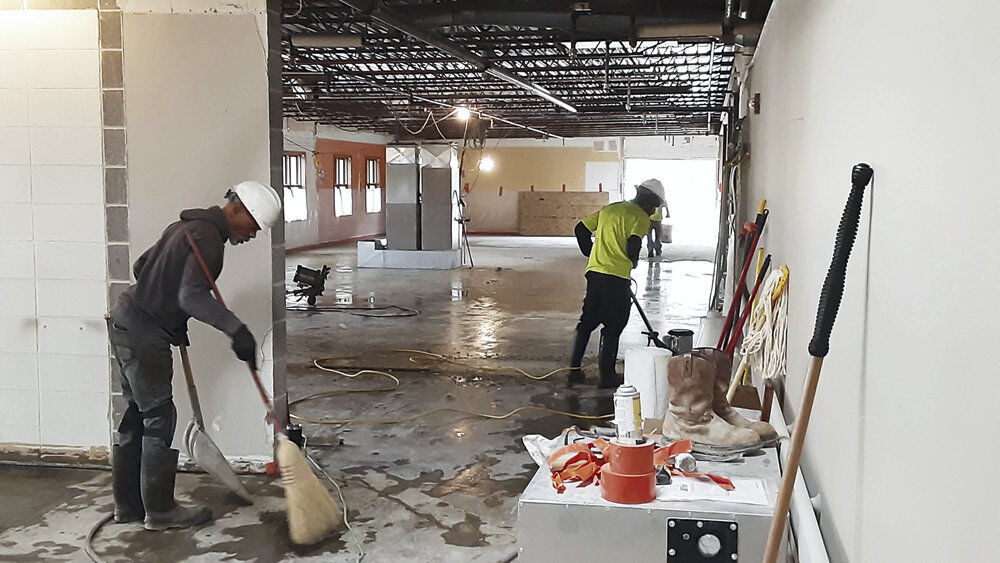 Mid Plains Construction Co. and Great Plains Asbestos Control Inc. have started renovating the former Wood River Good Samaritan Society nursing home to become the future home of the Stick Creek Kids Child Development Center. Here, the floor is being cleared of old glue for a new carpet to be laid in the future. (Independent/Brandon Summers) 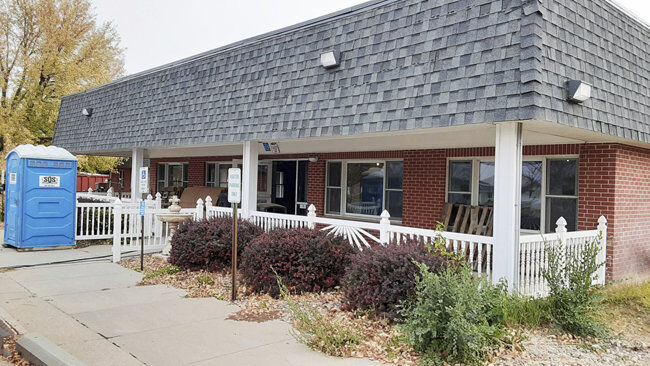 WOOD RIVER — An abandoned nursing home in Wood River will become the site of the town’s long-planned new childcare center.

The project will cost roughly $2 million, which was provided through fundraising.

The nursing home site was vacated and its residents moved to Hastings following a flood in March 2019 that devastated the Wood River community.

City of Wood River officials and its Vision 20/20 group were planning to construct a new childcare facility near Wood River Rural High School when the site was offered to the city in July 2019.

“We bought it, and decided to use the north 12,300 square feet and renovate it,” Mayor Greg Cramer said. “It gives us a little bigger facility and reuses a building in town that would have sat vacant for a while.”

Stick Creek Kids will be a full-service, licensed childcare center serving up to 80 kids while participating in Nebraska’s Step Up to Quality Program.

Sarah Arnett, Stick Creek Kids development coordinator, said she is glad the site will continue to be utilized.

“I think it’s phenomenal to take a building that was vacated and turn it into a place of new promise for the community,” she said.

The new facility is expected to be ready for use by March 2021, Cramer said.

The project, which went out for bid in February, is being headed by Mid Plain Construction Co. of Grand Island.

Using only the north half of the facility easily will support 80 kids, Cramer said, calling 80 “the magic number.”

“You have to meet a capacity of 80 to get reimbursed from the state,” he said, “and there are percentages you need with low-income families.”

“When you bring kids in earlier, you start that learning process earlier and catch deficiencies earlier so they’re better prepared by the time they get to kindergarten,” Arnett said. “It’s definitely a collaborative effort.”

The great need for childcare options in Wood River was emphasized by a community survey completed in 2013.

“We’re doing this in direct response to a well-known need in the community,” Arnett said. “We have a shortage of childcare everywhere.”

A new childcare center will benefit not only the Wood River community, but people who use Highway 30 to commute between Kearney and Grand Island, Cramer said.

“You’ll have a quality daycare right on the way,” he said. “They’re hard to find.”

Uses for the remainder of the site already are being considered.

“We’re only using half of it,” Cramer said. “The other half, on the south side, there’s some ideas for that, between the senior center moving there or maybe moving the library there, but that’s not definite. We still have a study to do.”

Cramer called the renovation a good use for the building.

“Otherwise, it would probably sit there or somebody would buy it for one room apartments,” he said. “We just want to make sure it’s taken care of and it’s an asset to the community.”

For more information about the project, visit woodriverne.com/stick-creek-kids.

State Sen. Ray Aguilar hopes two of his bills will benefit horse racetracks at Fonner Park and across Nebraska.

Deny Cacy has been the men’s shelter manager for the Grand Island Salvation Army for more than five years.

Mid Plains Construction Co. and Great Plains Asbestos Control Inc. have started renovating the former Wood River Good Samaritan Society nursing home to become the future home of the Stick Creek Kids Child Development Center. Here, the floor is being cleared of old glue for a new carpet to be laid in the future. (Independent/Brandon Summers)