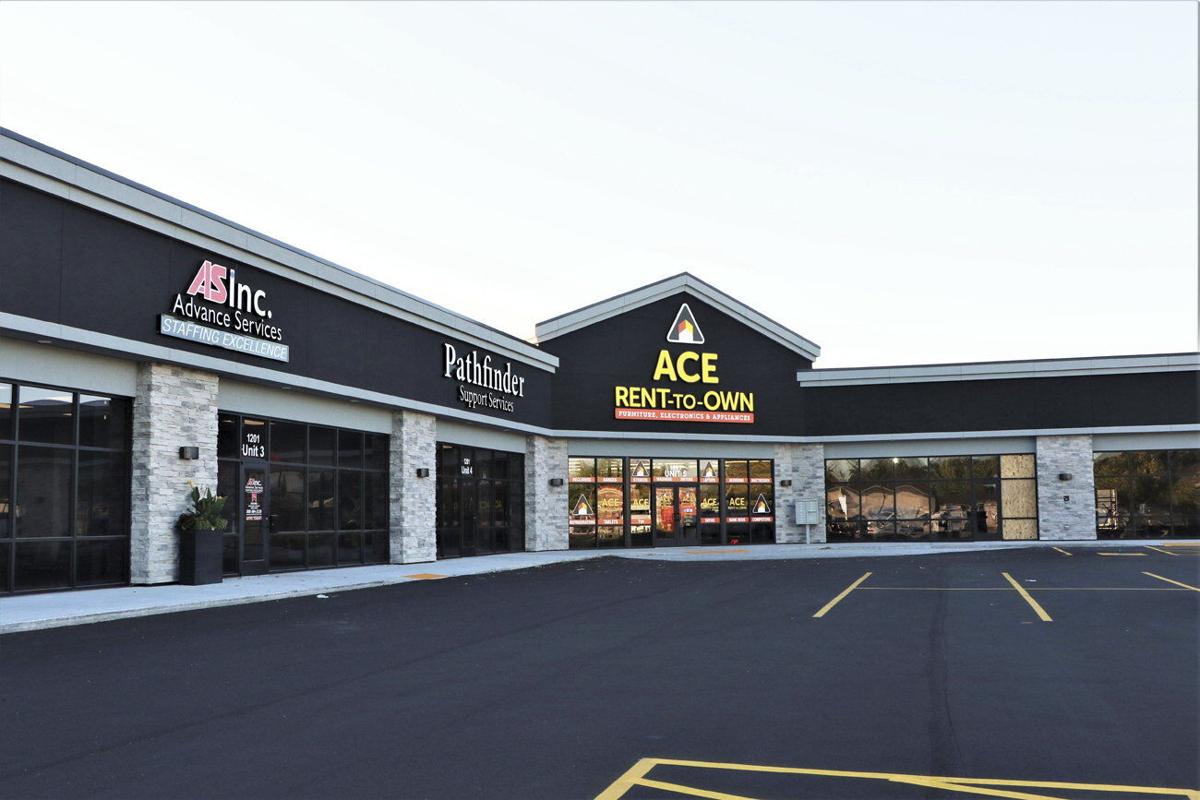 The Southeast Commons development is now home to Ace Rent-to-Own, Pathfinder Support Service and Advance Services Inc. It is located on the corner of Fonner Park Road and South Locust Street. (Independent/McKenna Lamoree) 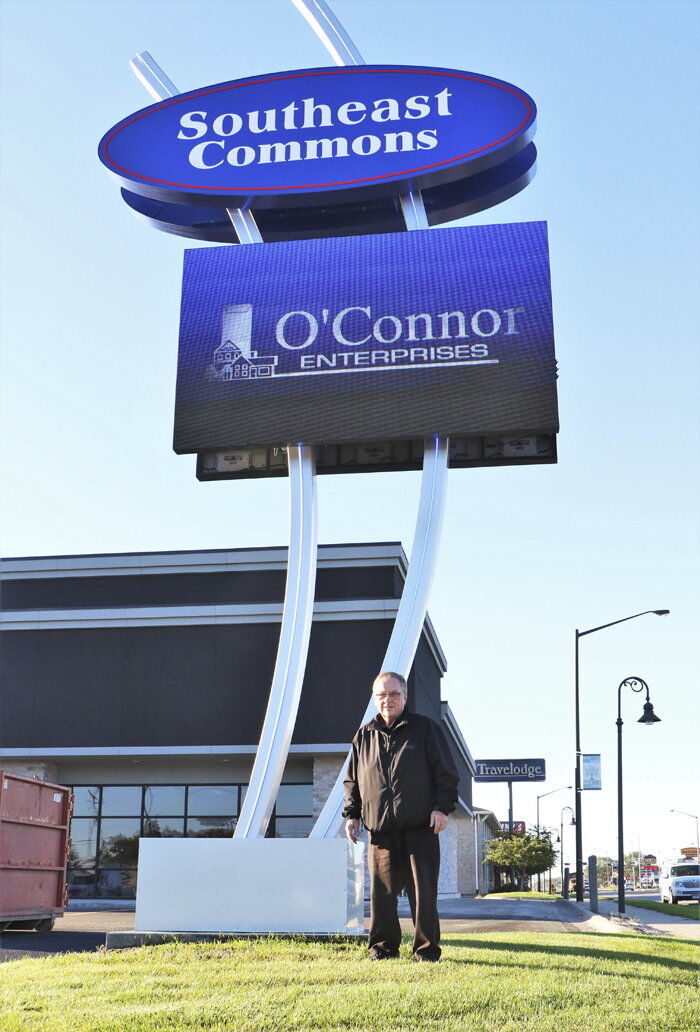 Developer Ray O’Connor poses by the new Southeast Commons sign. O’Connor has spent the past year making renovations to the property located on the southeast corner of South Locust and Fonner Park Road. (Independent/McKenna Lamoree) 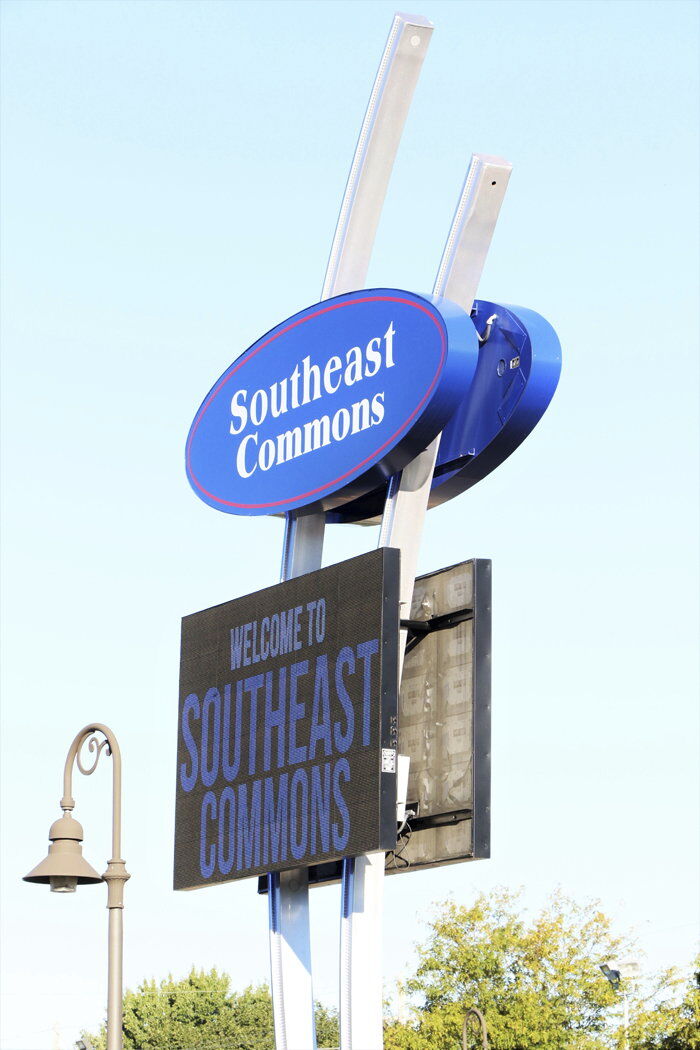 The former Fonner View Center displays its name change to Southeast Commons with a new LED sign out in front of the building. (Independent/McKenna Lamoree)

With work wrapping up and only one unit left to either sell or lease, Southeast Commons brings another crown jewel to ongoing development of South Locust Street.

South Locust has been seen it share of woes over the years. In the late 1960s a huge part of that area was inundated by flooding along the Wood River and in 1980 a series of devastating tornadoes hit the area causing millions of dollars in damages.

That was when local developer Ray Connor first got involved with the property as he was part of the crew that rebuilt that property after it was destroyed by the tornadoes.

In 1980, the property was the location of Willman’s grocery store. O’Connor said the center was rebuilt in 1981 and has had numerous owners since then. The latest was Town and Country LLC before O’Connor purchased the property.

In 2019, O’Connor received a call from the company’s owner, who lives in California, inquiring whether he were interested in purchasing the property.

“I had an interest in buying it because of the condition of it,” O’Connor said.

South Locust Street has been undergoing a major renovation since the Nebraska State Fair came to Grand Island in 2010. The street was widened, it became a four-lane road from Highway 34 to Interstate 80, where a new interchange was built.

Earlier this year, it was announced that Fonner Park will be home to a new casino and resort, which will further enhance South Locust Street’s value.

With Fonner View’s close proximity to Fonner Park and the Nebraska State Fair and the future casino and resort, O’Connor said the center needed an urgent face lift. He felt its deterioration was taking away from its potential.

“The condition of that property reflects very poorly on our community,” O’Connor said. “That was my motivation to get it cleaned up and get it to the point where people will be proud of that area again.”

O’Connor said Fonner Park Road at South Locust Street is “one of the best corners in town.”

“It is a 40-year-old property. You always have to keep looking at upgrading, repositioning it, and looking for tenants who want to be there.”

Work by Chief Construction began last year. During the renovation, the only remaining store when the work began, Ace Rent to Own, kept its doors open. They stayed open because it was the company’s best performing stores. Its patience was rewarded as its new facade that makes the store the centerpiece of Southeast Commons.

O’Connor said nine of the 10 units that make up Southeast Commons have either been sold or leased. Along with Ace Rent To Own, two businesses have already relocated there, Pathfinder Support Service and Advance Services. Roebuck Enterprises has purchased the two end corners with plans to develop those properties, both which used to be restaurants.

O’Connor said three of the units have been leased to a national retail chain, which plans to expand its presence in Grand Island.

He said there have also been inquiries to the last remaining unit, which can be either purchased or leased.

The parking lot has been improved and US Bank as installed a ATM at Southeast Commons.

O’Connor, who is 74, said he was hesitant about taking on Fonner View. But he has a track record of remaking and repurposing older properties, such as the Kmart building on Diers Avenue, the old Shopko building and Grand Island Mall.

Today (Sept. 26), the new O’Connor Learning Center that was once part of Shopko, is being dedicated.

Taking something old and abandoned and reimaging it into something new is a philosophy that O’Connor goes by that he calls “Rebuilt, Reborn, Remarkable”.

And he used that philosophy when it came to Southeast Commons.

“I wanted to do it right,” O’Connor said. “I just didn’t want to put some paint on and say here we go.”

In rebuilding that property so it could be reborn as something remarkable, O’Connor added three story towers on the end corner buildings and other improvements.

And O’Connor also knew the strategic positioning of Southeast Commons as it leads to the Fonner Park campus.

Along with Fonner Park being the home of horse racing for nearly 70 years, the addition of the Heartland Event Center and the Nebraska State Fair and $40 million worth of modern livestock barns that have hosted dozens of national livestock shows over the last decade, Fonner Park will be home of a $100 million casino and resort that will employ more than 300 people.

That was a motivating factor for O’Connor to get involved with Southeast Commons.

“Now, when people drive by, they’re going to take a look at that (Southeast Commons) and they’ll say this is a nice town and it isn’t a dump no more sitting on that corner.”

The Southeast Commons development is now home to Ace Rent-to-Own, Pathfinder Support Service and Advance Services Inc. It is located on the corner of Fonner Park Road and South Locust Street. (Independent/McKenna Lamoree)

Developer Ray O’Connor poses by the new Southeast Commons sign. O’Connor has spent the past year making renovations to the property located on the southeast corner of South Locust and Fonner Park Road. (Independent/McKenna Lamoree)

The former Fonner View Center displays its name change to Southeast Commons with a new LED sign out in front of the building. (Independent/McKenna Lamoree)