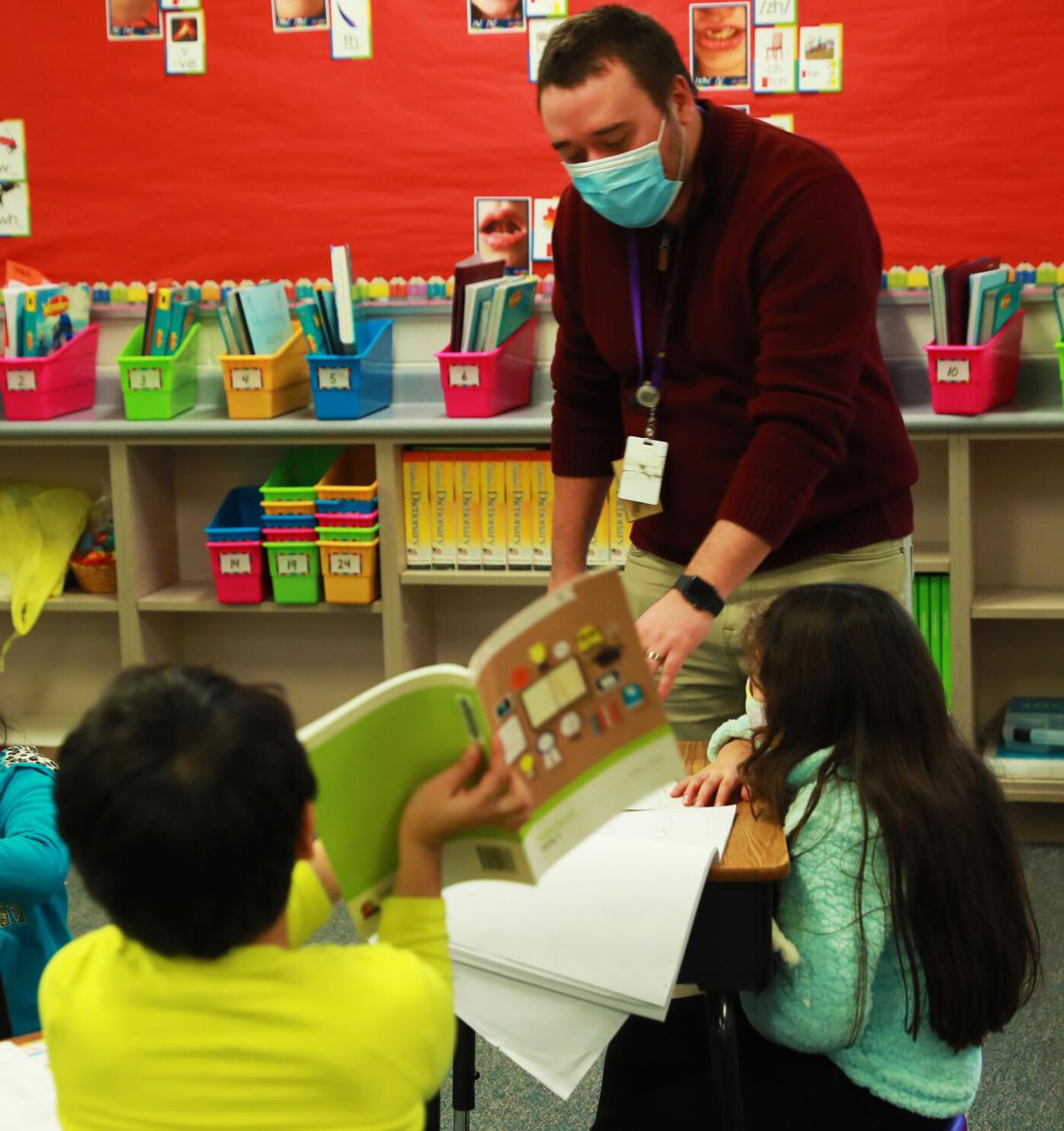 Happy to be back in the classroom, Cade Huncovsky, a second grade teacher at Wasmer Elementary, made the transition from Virtual School to on-site teaching. Before this school year, he taught English language learners at Wasmer, but transitioned to teaching second grade at the GIPS Virtual Elementary School this fall, before transitioning to teaching at Wasmer last Monday. (Independent/Josh Salmon) 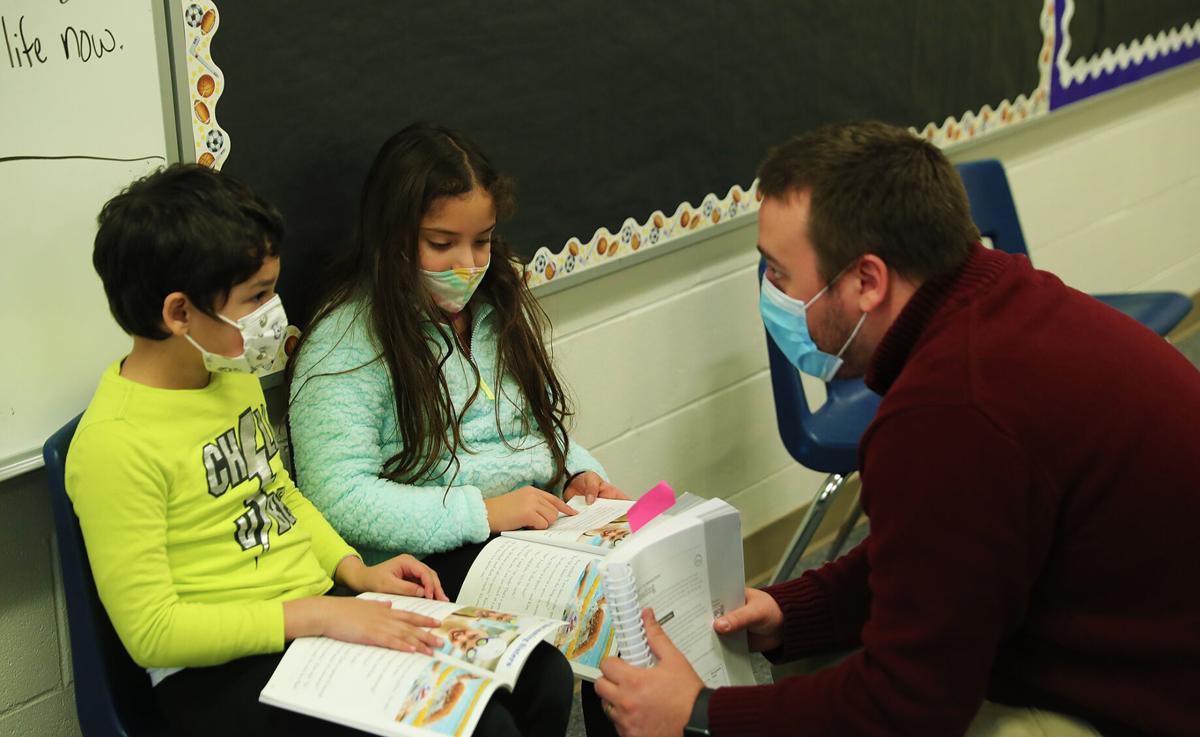 Wasmer second graders Dylan Rodriguez (left) and Lezzlie Molina work on their reading skills with their teacher Cade Huncovsky who returned to the classroom Nov. 9 after teaching virtually since spring 2019 due to Covid-19 precautions. Rodriguez was one of a few second-graders who also returned to regular school after learning virtually. (Independent/Josh Salmon) 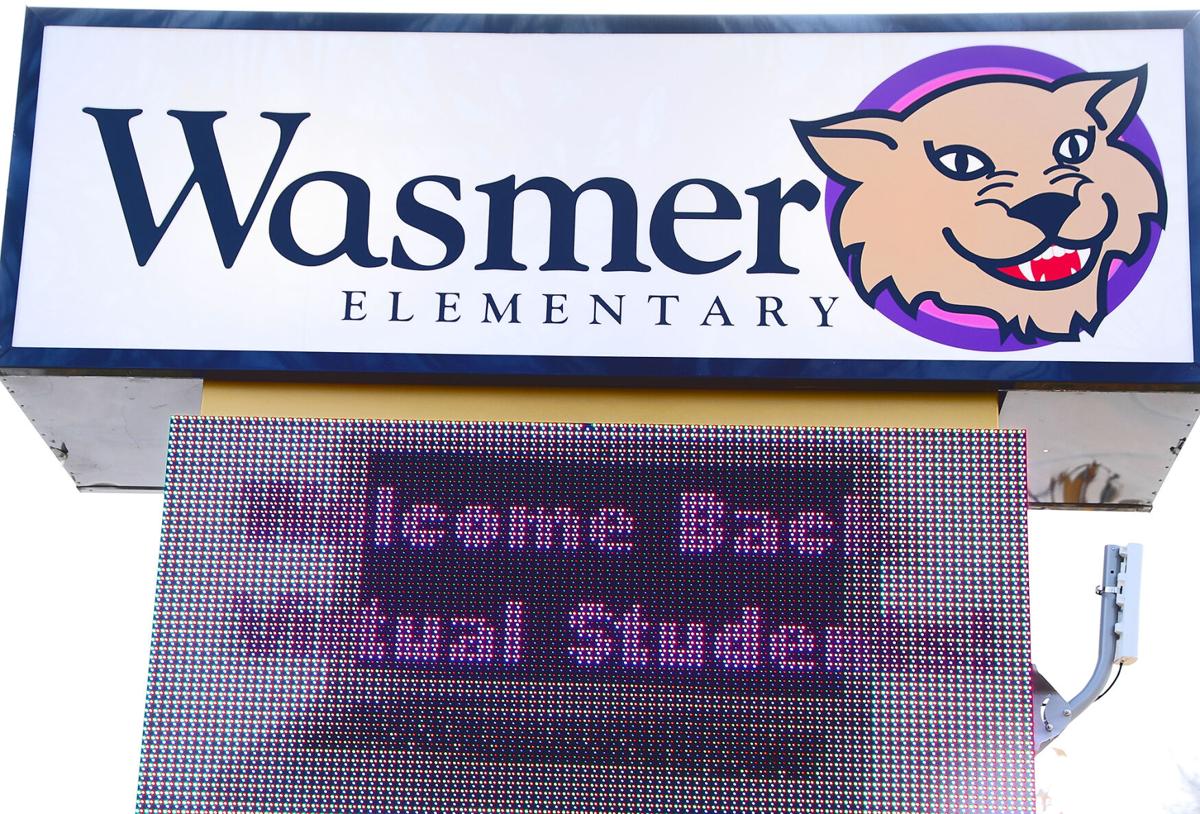 Grand Island Public Schools’ campuses have some new faces as some students and teachers have transitioned from the district’s Virtual School back to in-person school.

Toni Palmer, GIPS chief of Leading for Learning, said 216 elementary students and 130 middle school students made the transition Nov. 9. She said the transition from Virtual School to on-site learning will not happen for Grand Island Senior High students until the start of the spring semester. Second semester for high school students begins Jan. 5.

In addition to the students, Palmer said, nine GIPS teachers transitioned from the Virtual Elementary School to on-site teaching. The middle school teachers taught virtually from their respective brick-and-mortar schools.

“Our elementary and middle schools run on trimesters, so it was a natural break for students,” Palmer said of the transition. “That will provide students coming in the opportunity to start fresh with a new trimester.”

She said no teachers transitioned from on-site teaching to the Virtual School.

“It is nice to see students in the school setting again,” he said. “I definitely like being around people again. I can now see more faces than just my wife’s and my dog’s. It has been nice seeing all my old coworkers and getting to talk to them face-to-face. That has been a big morale boost I think.”

Huncovsky said the transition has “been a whole new learning experience” due to the COVID-19 restrictions GIPS has in place.

Students must wear masks at all time, he said. “Students also have to line up in the right order for lunch because if something does happen, we can track who was sitting by whom and who has been exposed. Luckily, I have been blessed to have some kids who have been on-site transition into my classroom. So I can go to them and say, ‘Hey, what do you usually do in this situation?’ and they have been able to help me.”

Huncovsky said the transition to on-campus teaching “has been fine and has not really been that difficult.” The challenge, he said, has been transitioning to teaching second grade at Wasmer from ELL.

“It is just the small things of getting around the school and interacting with kids since everything is different,” Huncovsky said.

“Luckily, my team teachers have been really helpful in that if I ever have a question, I can just go to them at any time. They are super helpful.”

Huncovsky said he has “a blended class,” with some of his students being former Virtual School students and others already learning on-site at Wasmer.

Huncovsky said his students who have been learning on-site at Wasmer are helping his formerly Virtual School students transition to classroom learning.

“It is almost better to have those peers to help them with that,” he said.

Grace said it was fun being in Virtual School as she was able to learn from home on the computer but that she is happy to be back at Wasmer. When asked whether he was excited to be back in school and to see his friends, Dylan’s eyes lit up as he said, “Yeah.”

Paityn said it was harder for her to do her school work, compared to in-person learning, because her two dogs would distract her.

“My mom works from home, so it was kind of hard for her if I needed help,” she said.

All three students said they have had to adjust to wearing masks all day as part of their on-site learning. Dylan said he and his classmates are able to take mask breaks, which are beneficial.

“I think they are doing pretty good,” he said. “They’ve gotten used to the masks, but I do have to remind them every now and then to keep them over their nose. They need masks breaks, too, which we give them whenever they need them. But they have done a really good job following the rules. It has really helped to have those kids who have been on-site show these kids what to do as they have not experienced that much yet.”

Huncovsky said he thinks the transition period has helped everyone, including himself, adjust to being back at school.

“I like that the district gave us teachers who are transitioning a few days to come in and get our classrooms ready,” he said. “We were able to observe some classrooms that were already teaching and (see) how they did the different procedures. GIPS did a really good job with that. It lets us get a lot more prepared than what we would have been. Plus, our kids were not coming in to empty classrooms. I had more of a classroom and it helped the transition seem more normal.”

Palmer said that Virtual School still has more than 400 students K-5 and more at the middle school level.

“We still have families that prefer to be in Virtual School just because of their current situation, health issues, etc.,” she said. “We are happy to provide that opportunity for our families to have that choice.”

“Of course, if there are specific or unique circumstances, we will work with parents on those situations,” Palmer said. “But, there is so much work that goes into preparing for another change that we want to maintain a continuity of learning for our students.”

NYC nurse tells her story to get people vaccinated

NYC nurse tells her story to get people vaccinated

Happy to be back in the classroom, Cade Huncovsky, a second grade teacher at Wasmer Elementary, made the transition from Virtual School to on-site teaching. Before this school year, he taught English language learners at Wasmer, but transitioned to teaching second grade at the GIPS Virtual Elementary School this fall, before transitioning to teaching at Wasmer last Monday. (Independent/Josh Salmon)

Wasmer second graders Dylan Rodriguez (left) and Lezzlie Molina work on their reading skills with their teacher Cade Huncovsky who returned to the classroom Nov. 9 after teaching virtually since spring 2019 due to Covid-19 precautions. Rodriguez was one of a few second-graders who also returned to regular school after learning virtually. (Independent/Josh Salmon)