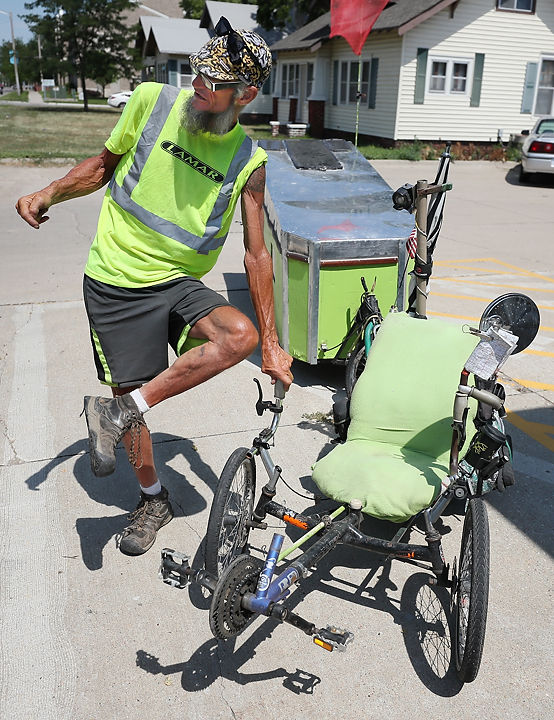 Tony Adams points to his hiking boots while talking about the number of footwear he’s been through as he uses his feet for braking. (Independent/Andrew Carpenean) 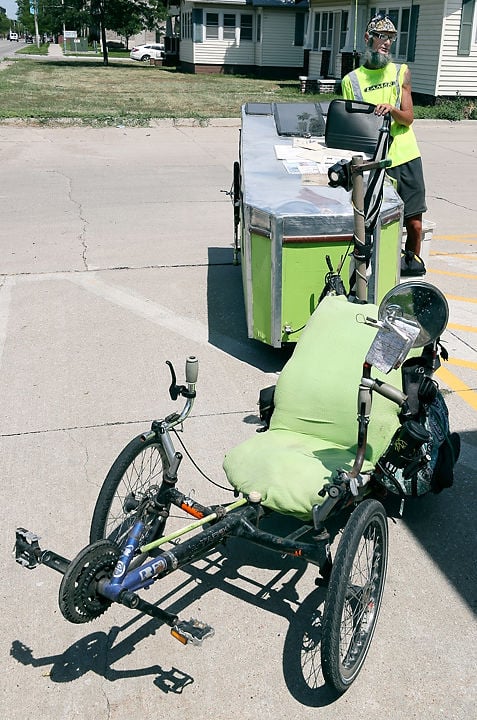 Tony Adams reminisces over his 17 years in his journeys across the country on a tricycle with a 620-pound trailer home he tows. Adams, 52, rides between 30-42 miles a day. Between the tricycle and trailer, Adams always has six wheels rolling with eight spare tires. (Independent/Andrew Carpenean) 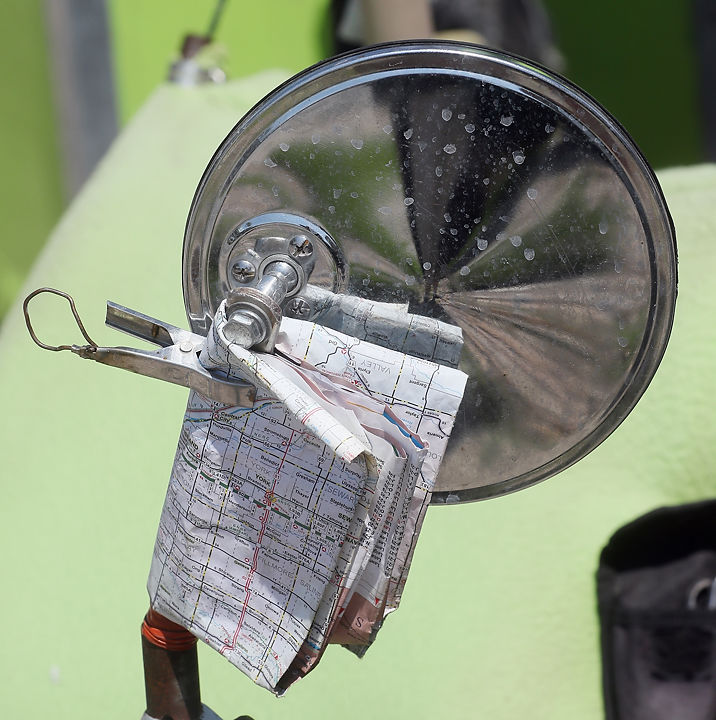 A roadmap is clipped to a rearview mirror on Tony Adams tricycle. (Independent/Andrew Carpenean) 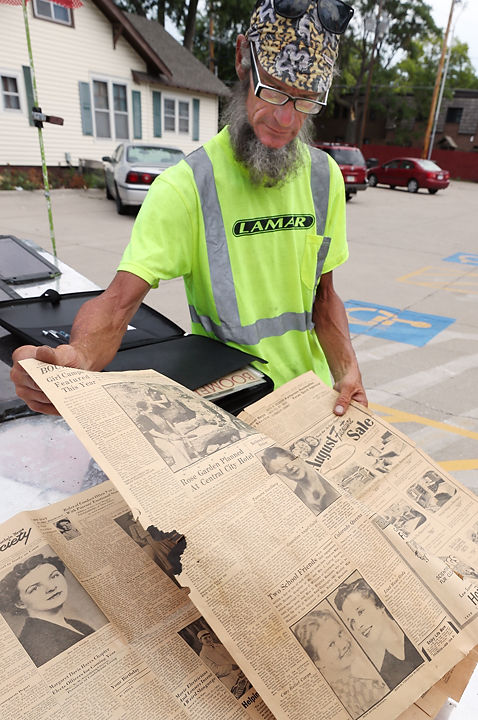 Tony Adams shows a July 29, 1940 edition of The Denver Post he discovered in the rafters of a housing project he worked on in Loveland, Colo. (Independent/Andrew Carpenean)


Tony Adams drags 620 pounds with his recumbent tricycle, and approximately 10 pounds of it is from Grand Island.

Adams stopped by Grand Island in 2010 to pick up a small color television, which he still has stashed in his 8-foot-by-3-foot home, seven years later.

Sometimes you need entertainment when you’re not cycling across the United States.

Adams made his third stop in Grand Island (the first was in 2000) on Tuesday to receive donations from Hope Harbor and tell the story of how he has spent the past 17 years cycling the roads of the United States with his home behind him.

Adams has lived his life by trial and error. The furthest he got in school was the eighth grade, and he didn’t make it into the military after failing the math portion of the entrance exam.

But after 17 years of cycling, Adams has made traveling into a science.

He cooks in a 1-foot-by-2-foot kitchen with a propane stove. His bed folds out into a 7-foot sleeping berth. He showers once a week.

He keeps two flashlights, two cups, maybe four spoons, five forks. He has one cooking pan, one pot and two pairs of pants. The pants have light seams because heavy seams will cut into his skin while he’s riding. The TV, a DVD player, a CB radio and an iPod nano keep him entertained, although the iPod doesn’t have any of his favorite tunes. It contains a stranger’s music taste — Adams found it in a trash can.

Coffee keeps him going. Starbucks is OK, but he prefers Seattle’s Best. Kraft Singles and summer sausage are in his Styrofoam cooler. He’s out of toothpaste, but Hope Harbor’s service coordinator, Peachis Mason, assured him, “We can get you some toothpaste, Tony.”

When people ask Adams how he manages, he replies, “Through the Lord, and through donations.” He parks his bike to ask nonprofits, “‘May I receive ...’ because “nothing is a ‘Gimme,’” he said.

Most of his possessions come from the road itself — his flagpole, his spot mirror and most of his tools were gleaned with a sharp eye.

And other items come from the communities he visits. When a Lakotan man and his wife learned Adams’ first dreamcatcher had rotted away, they came back with a new homemade one.

He has hung that dreamcatcher on the wall of his home — which he’s “wallpapered” with an old sheet — and a red bull sits on the front of his bike.

The 620 pounds of practicality and sentimentality has carried him to 36 states. He has been from Oregon to Niagara Falls, as well as Pensacola, Fla., Texas twice, Montana twice, California four times, Washington four times ...

This year, he’s traveling toward Portland, Maine. And then he’s headed back to Portland, Ore., to reach 21 states round trip.

“I am going out and searching for whatever drives people,” Adams said. “I feel that I’m looking for questions most people haven’t even asked yet.”

He said most people accuse him of being ‘too deep,’ but spending nine to 11 hours every day on a bike will do that to a person.

Adams’ journey began in 1995, when his father was dying of a stroke. His father asked him to find an older brother and bring him home, so he could make amends with his son.

Adams spent 30 days on a 10-speed bicycle to travel from southern Oregon to Las Vegas.

Once he reached Las Vegas, he needed to find his homeless brother among the thousands of Las Vegas residents. So he tapped on the shoulder of a man to ask him directions to the nearest shelter.

“He turned around, and it was my brother,” Adams said. “My mom called it fate, like it was supposed to happen.”

It inspired Adams to launch a lifelong voyage.

There’s physical evidence of his progress: He has pictures of the Grand Canyon, Niagara Falls, the Snake River. But once he reaches a landmark, he said, he looks at it and walks away.

The old cliche “It’s not about the destination; it’s about the journey” is true, he said.

“It’s about the people I meet, their different realities and their concepts,” Adams said.

Seventeen years of thinking on the road has made him into a different person, and Adams said that growth will never stop.

“This is for the rest of my life,” he said. “Otherwise, I would have to resort to one of those things,” he said, pointing at the cars passing by on Highway 30. “But being 52 years old and draggin’ 620 pounds, I don’t think I’m lazy enough for one of those things. To me, that would be lazy.”

The time he has spent with himself, and with the Lord (he looks up to the sky) has shown Adams he’s doing what’s right for him.

“Some people say I need to stay in town, have a wife, have kids, have a car,” Adams said. “I feel I have a better life because I’m not set in one way for the rest of my life.”

Hands of Heartland, which serves adults with physical and intellectual disabilities, has opened an office in Grand Island. The Grand Island Chamber of Commerce hosted a ribbon cutting ceremony Thursday at the agency’s facility in Bosselman Plaza, 3012 S. Locust.

A former work space will be transformed into a learning space.

Tony Adams points to his hiking boots while talking about the number of footwear he’s been through as he uses his feet for braking. (Independent/Andrew Carpenean)

Tony Adams reminisces over his 17 years in his journeys across the country on a tricycle with a 620-pound trailer home he tows. Adams, 52, rides between 30-42 miles a day. Between the tricycle and trailer, Adams always has six wheels rolling with eight spare tires. (Independent/Andrew Carpenean)

A roadmap is clipped to a rearview mirror on Tony Adams tricycle. (Independent/Andrew Carpenean)

Tony Adams shows a July 29, 1940 edition of The Denver Post he discovered in the rafters of a housing project he worked on in Loveland, Colo. (Independent/Andrew Carpenean)