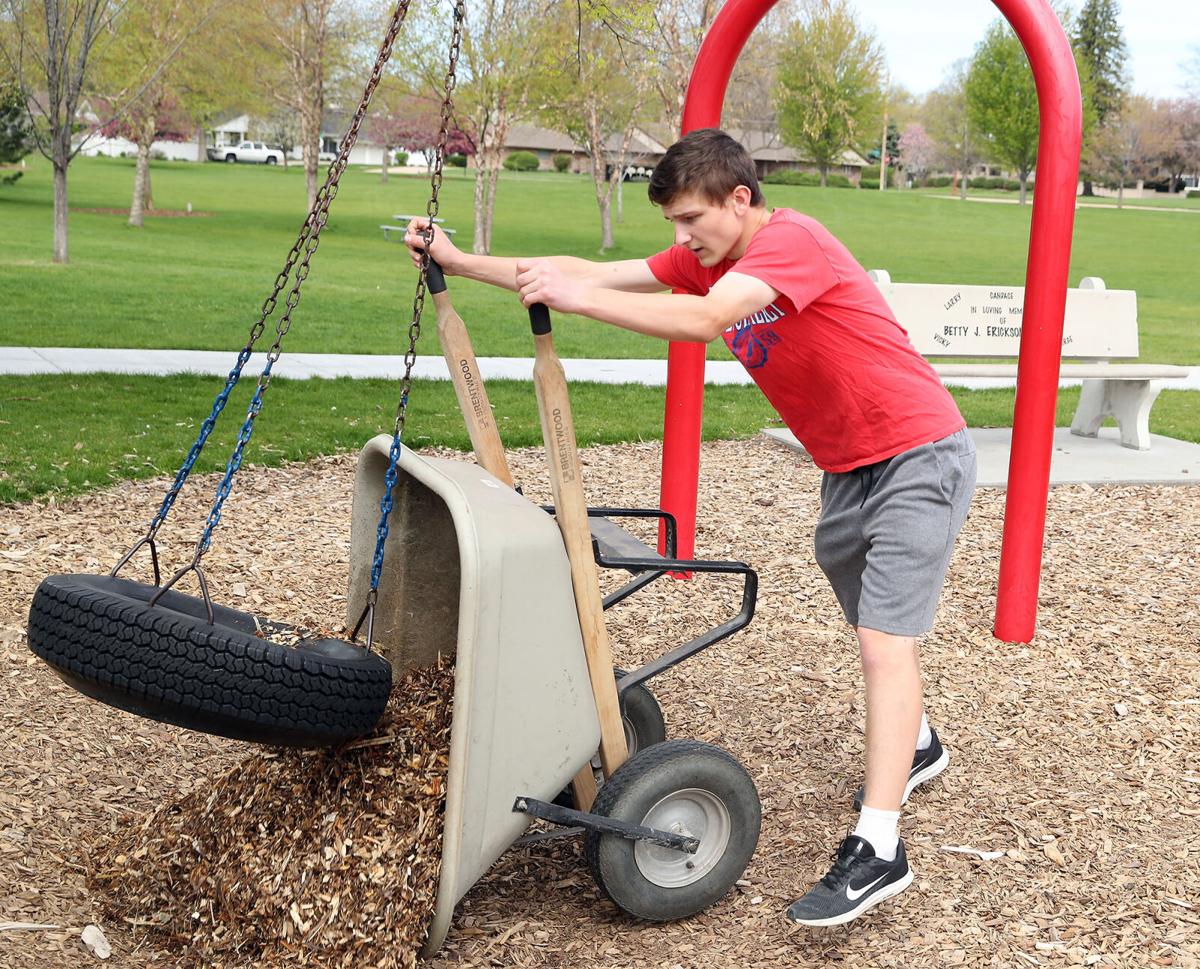 Joe Messere, an eighth-grader at Grand Island Central Catholic, dumps mulch on the playground at Sucks Lake on Friday as part of GICC's annual service day. More than 300 students and staff members went to locations around town to take on various projects. (Independent/Josh Salmon) 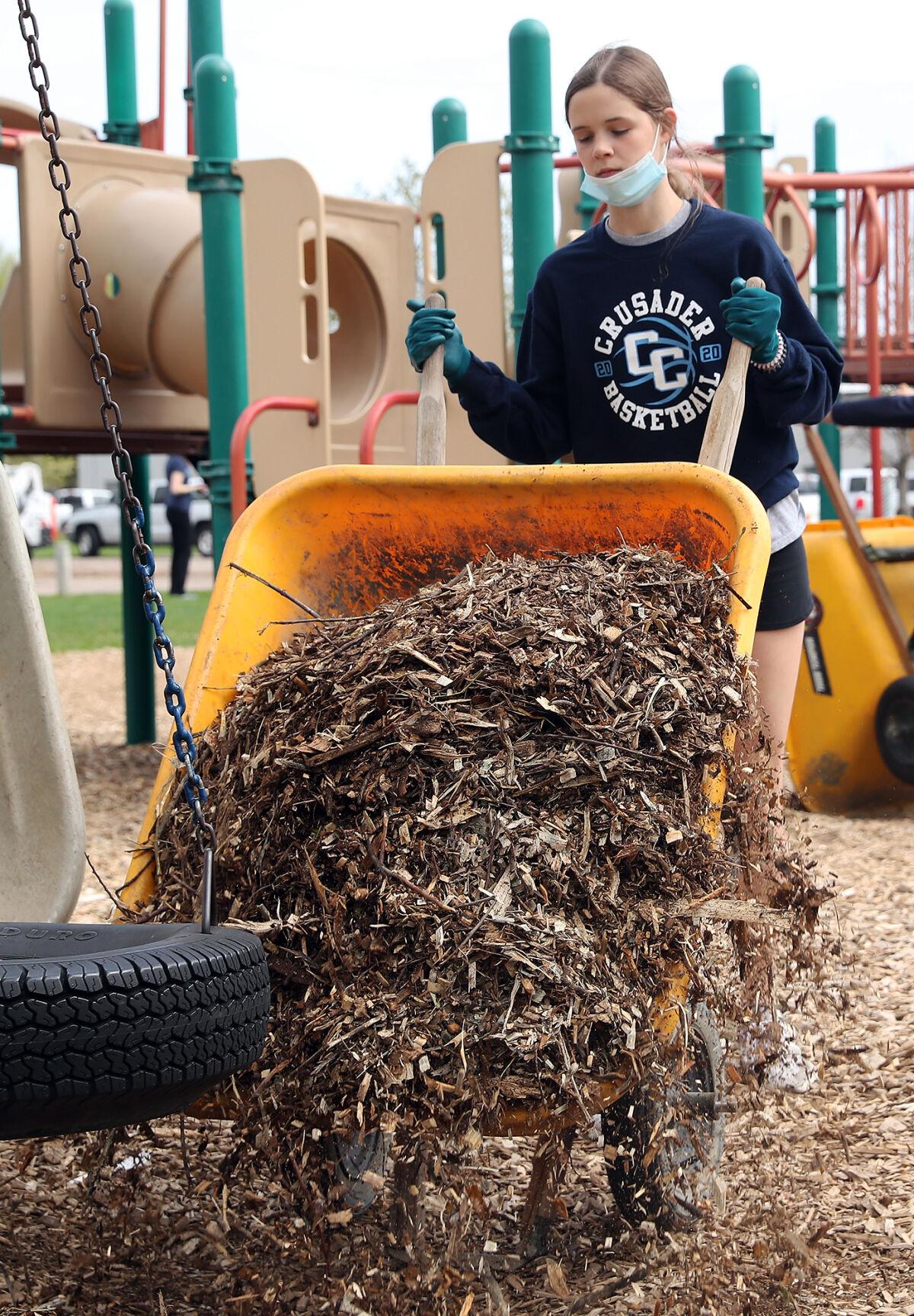 Maggie Herbek, an eighth-grader at Grand Island Central Catholic, dumps mulch on the playground at Sucks Lake on Friday as part of GICC's annual service day. More than 300 students and staff members went to several locations around town to help out with projects. (Independent/Josh Salmon) 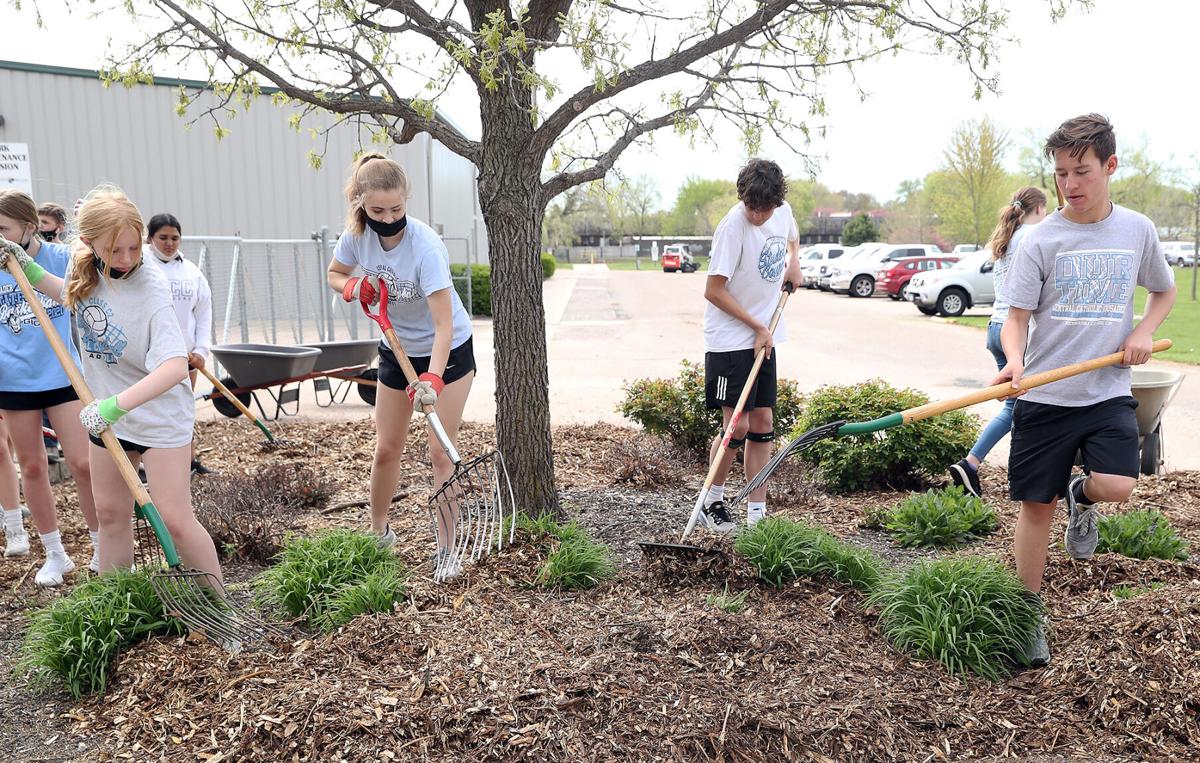 More than 300 Grand Island Central Catholic School students and teachers took to the streets of Grand Island last week on a mission to serve.

The day of service is an annual tradition for the school, and spearheaded by Dee Hanssen, GICC campus youth minister and religion teacher. The school has been taking on the end-of-school-year service for about 10 years, Hanssen said.

“We want to develop well-rounded students that give back to their church and community,” she said.

Joey Koralewski, a junior at GICC, said community service makes up a major piece of his education at GICC.

“Our school is trying to prepare us for life after graduation,” he said.

Students have a required amount of service hours they must accomplish each school year, increasing until senior year with 30 community service hours. Hanssen said it’s not uncommon for GICC students surpass their required hours.

In previous years, the students spent a significant part of the service day inside, working in places like nursing homes. The coronavirus changed that.

“With COVID, we had to find more outside things to do,” Hanssen said. And there was plenty to do — the youths spread out across towns helping at churches, picking up litter on area highways, painting parking lots, cleaning up city parks and doing landscaping for a Habitat for Humanity project house — among other things.

Hanssen said the school’s focus on volunteerism often carries over into other aspects of students’ lives. She said there have been GICC students who go on to work in construction careers like project managers after volunteering for Habitat for Humanity. Other windows of opportunity open for students, Hanssen said.

Koralewski said doing community service is leading him to get more involved in school activities.

“Hopefully I can expand on (community service),” he said. “Next year, I’m looking for more leadership positions at school.”

The day of service involves students grades 6-12, along with teachers.

“You always hear negative things about kids these days; I did not see any kids goofing around,” Hanssen said. “The kids got a lot accomplished.”

A great deal of satisfaction comes with those accomplishments, Koralewski said.

“The best is at the end when you look back and see what you’ve done for your community,” he said.

Those accomplishments of kindness do not go unnoticed, Hanssen said, as organizations go out of their way to express their appreciation.

“It makes us excited to get back out there,” Hanssen said.

Last year, COVID-19 put the school activity on pause, GICC students having to sit out the 2020 service day. This year brought extra enthusiasm for the day.

“They really appreciate just being able to do it,” Hanssen said.

Koralewski said he is no exception and enjoys the time spent volunteering.

“I get to help the community — and spend time with my friends,” he said.

Keeping a finger on the pulse of the city’s needs helps determine where the servant-leaders volunteer.

“You just kind of listen to what people need,” Hanssen said. “I just start calling. It takes a lot of planning, but it came together.”

Taking part in the school’s service day helps students get a better feel for their community’s needs as well, Koralewski said.

“With the service day we understand how we can help the community,” he said.

Besides helping their community, the day brings the GICC community itself together. Hanssen said, “It builds team unity. You really learn how to work together.”

Get our local education coverage delivered directly to your inbox.

Started through a partnership with CHI St. Francis Medical Center in 1997, the Grand Island Senior High Wellness Center has played a vital rol…

WOOD RIVER — Two years ago, Wood River residents were still cleaning up their houses after the floods of 2019.

‘On Track to Thrive 2025’: Grand Island Public Schools finds opportunities in the face of adversity

In the throes of the coronavirus pandemic, some schools saw the proverbial glass half-empty, scrambling for solutions.

Two teachers from Grand Island Public Schools have been honored with 2020-21 Nebraska College Preparatory Teacher of the Year Awards.

To say Opal Bentley is an experienced educator would be an understatement.

Metropolitan Community College has unveiled a tempting offer for Nebraska high school students who want a jumpstart on college credits.

Joe Messere, an eighth-grader at Grand Island Central Catholic, dumps mulch on the playground at Sucks Lake on Friday as part of GICC's annual service day. More than 300 students and staff members went to locations around town to take on various projects. (Independent/Josh Salmon)

Maggie Herbek, an eighth-grader at Grand Island Central Catholic, dumps mulch on the playground at Sucks Lake on Friday as part of GICC's annual service day. More than 300 students and staff members went to several locations around town to help out with projects. (Independent/Josh Salmon)