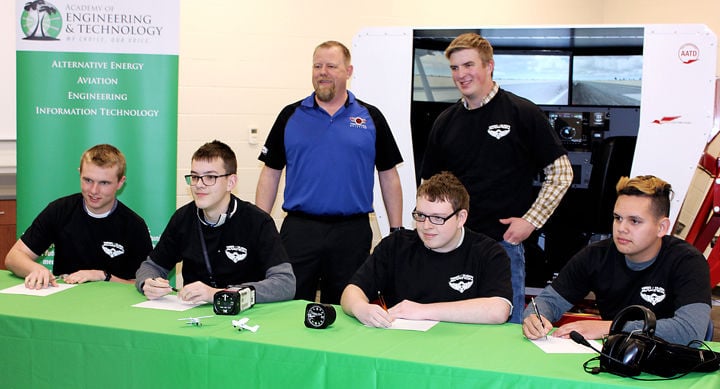 (From left) Sam Schrage. Alex Miller, Alexander Thurston and Jose De La Hoz sign their internship agreements Wednesday with Trego Dugan Aviation. In back are Zachary Thompson, the company’s vice president of maintenance, and another CPI student, Alex Levering, who will begin employment next week at Trego Dugan. (Independent/Jeff Bahr) 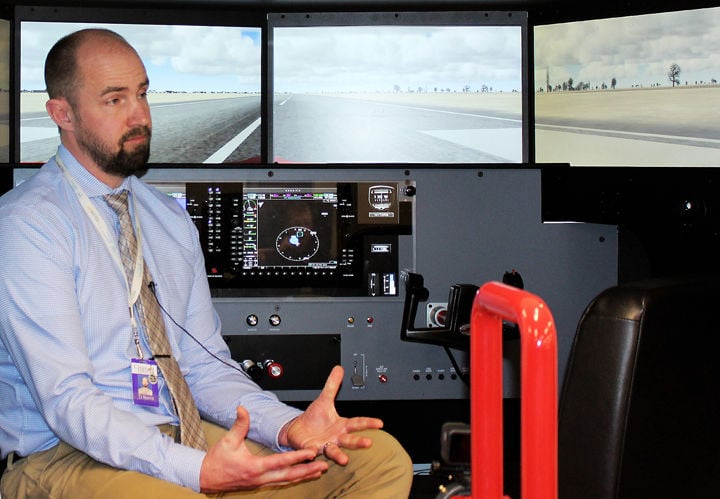 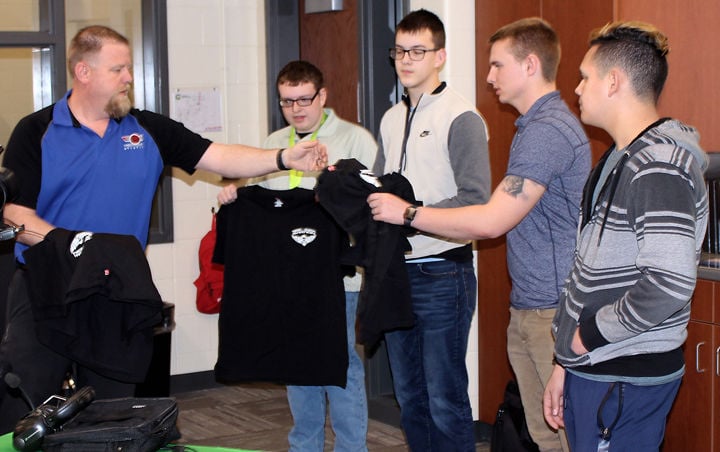 (From left) Sam Schrage. Alex Miller, Alexander Thurston and Jose De La Hoz sign their internship agreements Wednesday with Trego Dugan Aviation. In back are Zachary Thompson, the company’s vice president of maintenance, and another CPI student, Alex Levering, who will begin employment next week at Trego Dugan. (Independent/Jeff Bahr)

For Career Pathways Institute students interested in aviation, the pathway is up.

Trego Dugan Aviation in Grand Island has awarded weeklong internships to four CPI students. While other students are on spring break, they will learn about aviation, a field in which they all have an interest.

Juniors Jose De La Hoz and Alexander Thurston and seniors Alex Miller and Sam Schrage will show up for orientation Friday and return to Trego Dugan all next week.

Another CPI student, senior Alex Levering, will begin employment next week at the company.

The internships, which were announced Wednesday, are possible because of the new aviation program at CPI.

The aviation pathway is part of the Academy of Engineering and Technology. It is one of 20 pathways, said T.J. Norris, who teaches aviation at CPI.

The aviation industry offers high-paying jobs, he said. Those jobs are also available. There is a shortage of pilots and mechanics worldwide.

Norris, who is in his first year at CPI, is a certified flight instructor. The students have received their student pilot certificates, said Norris, who graduated from Nebraska Christian School in Central City in 1996.

In the past, Trego Dugan has offered internships mostly to college students.

Occasionally, the company has had individual high school students who were interested in aviation as a career.

But the addition of the aviation program at CPI made it possible for a formal high school intern program.

Not everyone who applied for an internship got one.

“It was very competitive. They prepared an application like they were applying for a job,” said Zachary Thompson, Trego Dugan’s vice president of maintenance. “Each one of them interviewed with me as if they were interviewing for a position with Trego Dugan. And it was very difficult to choose just four.”

He wishes he could choose more.

Next week, the interns are going to observe Trego Dugan technicians at work. They’ll also “get their hands in there on the less risk-related things.”

“So anything we can have them do, we will,” Thompson said.

Levering will work in the line department of the company’s fixed base operation, which provides fuel and services for pilots who land at Trego Dugan.

He will undergo computerized training, safety education and job-shadow other employees before he deals with aircraft. Levering, 18, lives near St. Paul and attends Northwest High School. His parents are Lawrence and Sarah Levering.

De La Hoz, 17, hopes to work for a commercial airline. He is the son of Pavel De La Hoz and Daymi Canizares.

Miller, 18, wants to join the Coast Guard. He is the son of Ben and Mandy Miller.

Thurston, 17, hopes to become an airline pilot. He is the son of Melanie and Alan Thurston.

Schrage, 18, is already in the Army National Guard. He attended basic training for 10 weeks last summer at Fort Leonard Wood in Missouri. A student at Heartland Lutheran, he will enroll this fall in the flight operations program at the University of Nebraska at Kearney. Schrage, who lives in Shelton, is the son of Glen and Celeste Schrage.

Trego Dugan has about 50 employees in Grand Island.

Norris said Thompson plays a very important role with the aviation pathway. When he approached Thompson to ask about an internship program, the answer was yes.

“Some people in the community have been reluctant to embrace the academy model, and some members of the community have wrapped both arms around it and hugged it and loved it. Zach Thompson is in the latter group,” Norris said. “He has been an absolute champion of our program.”