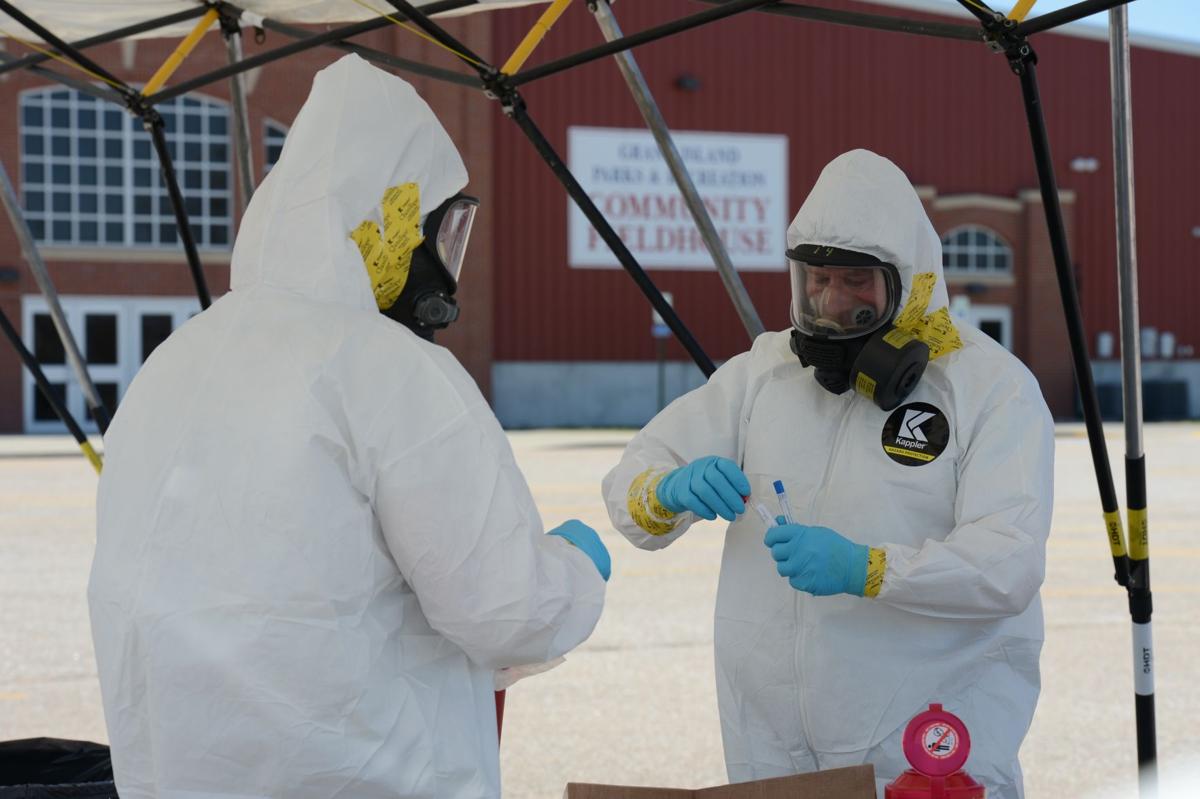 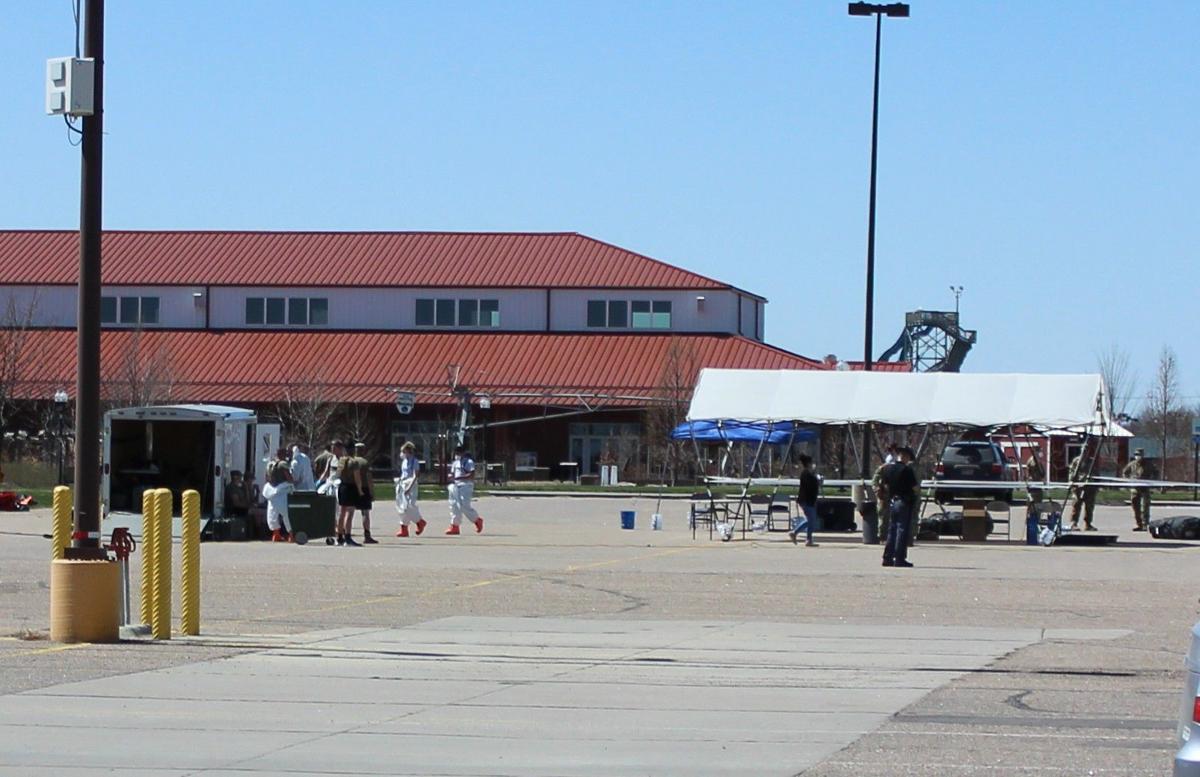 Nebraska National Guard members began two days of COVID-19 testing Tuesday at Fonner Park. The work is being done near the Community Fieldhouse and the Nebraska Building. (Independent/Jeff Bahr) 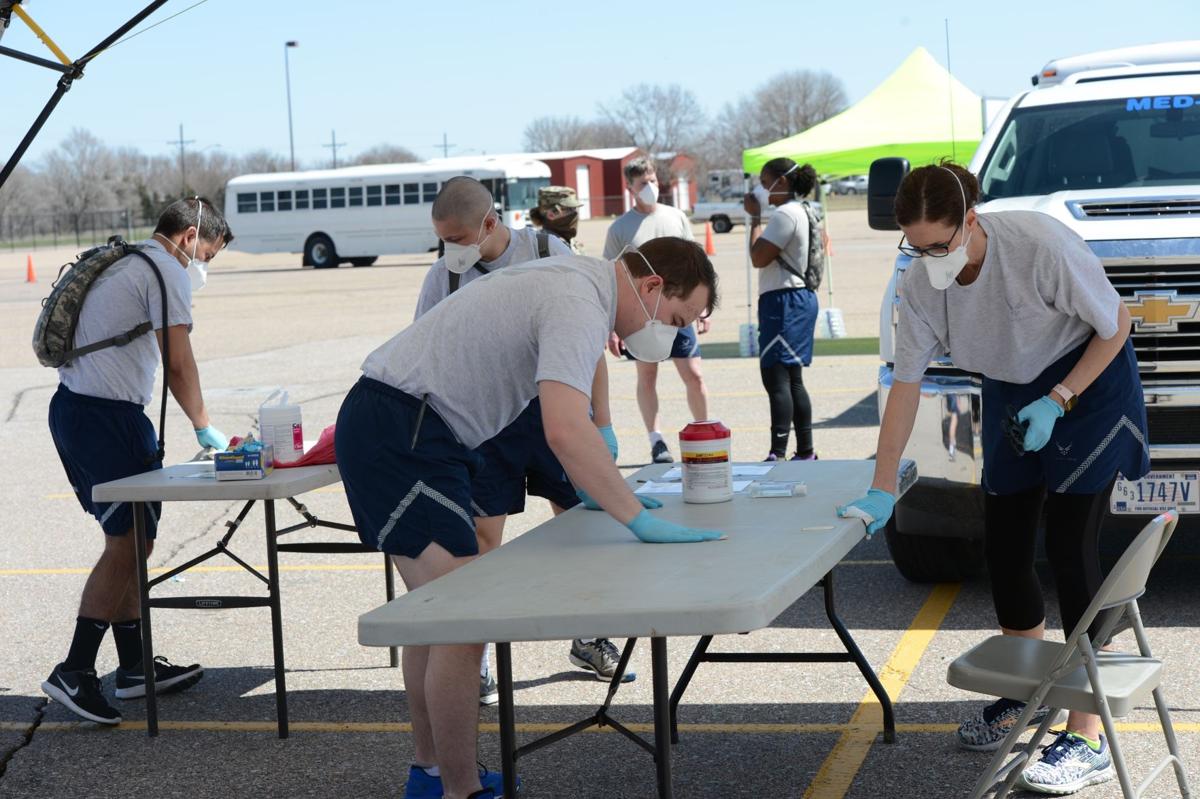 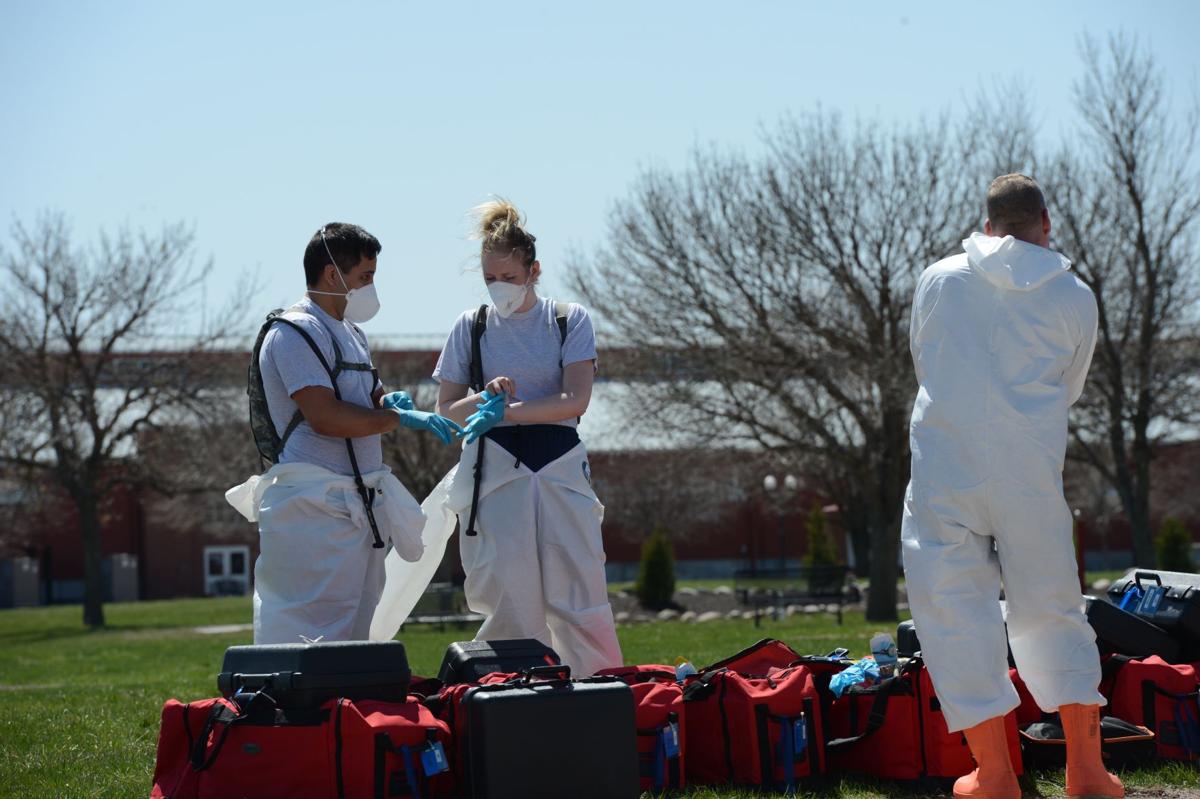 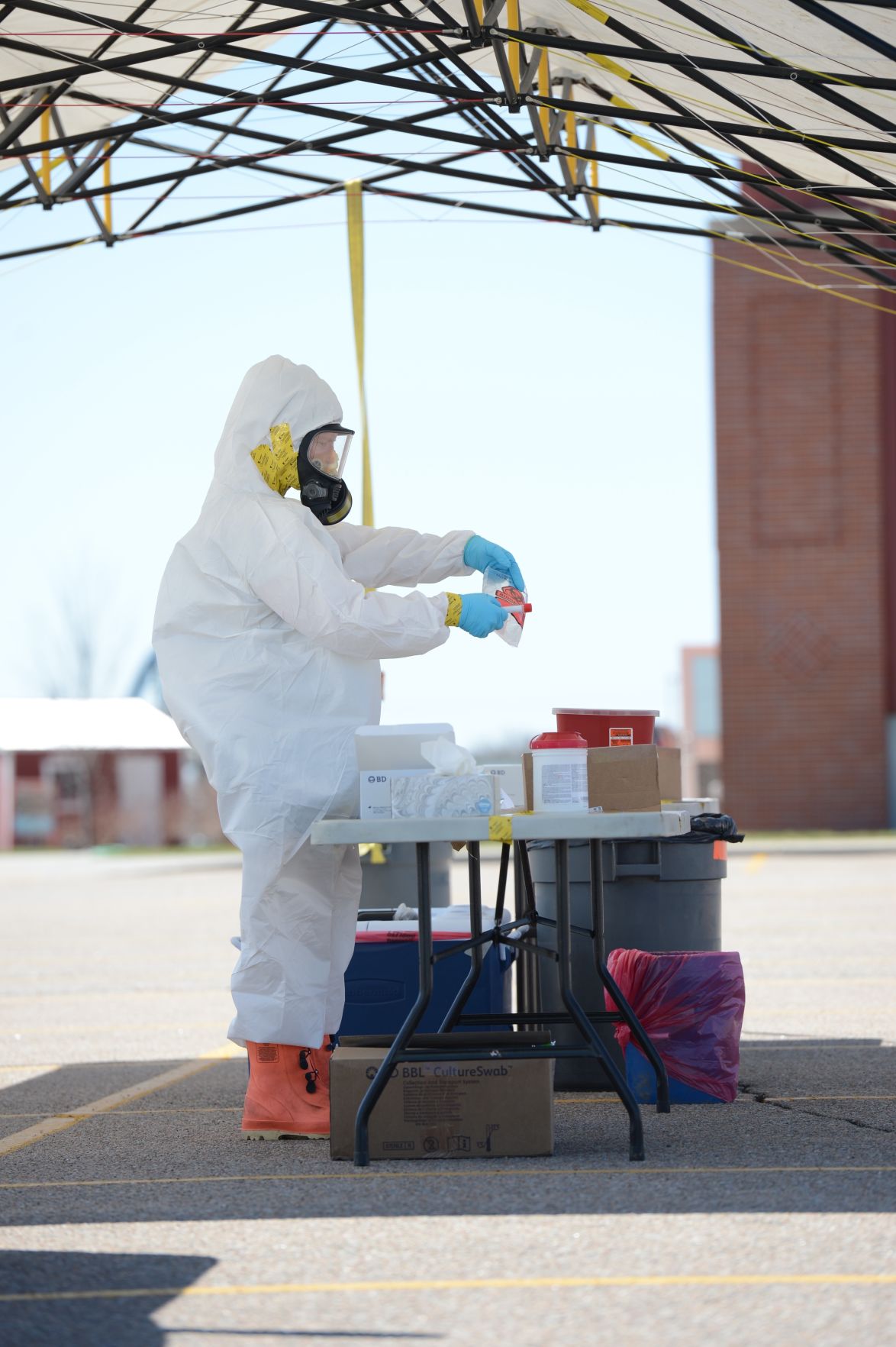 The Grand Island area reached an unwanted milestone Wednesday: It had more confirmed coronavirus cases than anywhere else in Nebraska.

That exceeds the 263 cases reported the same day in the far more populous Douglas County.

The local health agency also oversees neighboring Merrick and Hamilton Counties, which have four and 15 total cases, respectively, for a total of 297 cases in the three counties.

In fact, though Douglas County has the second-highest number of cases in the state, its per capita rate is actually below the statewide average. And it’s far below that of the state’s biggest hot spots: Hall, Kimball, Adams and Custer Counties.

Hall County also reported its fifth death Wednesday, a man in his 80s who was hospitalized.

Clusters of the disease have cropped up at the massive JBS USA plant, where 3,600 workers clock in for shifts cutting and packaging beef, the McCain Foods frozen appetizer factory, nursing homes and a health clinic.

The actual number of people infected is hard to tell and could be even higher.

A little more than 600 people have been tested in Hall County, according to figures from the Nebraska Department of Health and Human Services, compared to more than 3,800 people in Douglas.

“We are hopeful that the number of much-needed COVID-19 tests will increase in the near future,” Anderson said.

Earlier this week, data showed that 35% of those being tested in Hall County had the virus — much higher than the statewide average of 7.65%.

Health officials have said the number of confirmed cases will increase as a larger pool of people are tested.

Adams County and Hastings are just south of Grand Island, and many travel between the two cities to work or shop. Coronavirus cases there are also climbing, with 66 people testing positive as of Tuesday, including 12 workers at a Western Reserve beef processing facility in Hastings.

State and local officials said it’s hard to pinpoint exactly why the Grand Island area has emerged as such a coronavirus hot spot.

But some of the largest employers in the area are food processing and manufacturing facilities, including plants for JBS, Hornady ammunition and Case New Holland farm machinery. Case New Holland temporarily shut down production last week to prevent the virus from spreading.

“Grand Island stands on the front line in the fight against COVID-19 because we have many people employed in necessary jobs — manufacturing, food processing, agricultural equipment,” Mayor Roger Steele said last week at a press conference. “While other cities can ask office workers to work from home, that is not an option for our workers.”

Local doctors and Anderson have been warning for weeks that the number of cases would continue to rise and that there are most likely many more undetected cases in the community, given the testing shortage.

Anderson and Steele said they would have liked to institute a two-week shelter-at-home order to get a better handle on the virus, but Ricketts didn’t support that approach.

The governor has said Nebraska’s directed health measures, which have closed schools and dine-in areas at restaurants, and prohibited gatherings larger than 10 people, are similar to, and in some cases even stricter than, the stay-at-home orders enacted in other states.

Anderson has said she fears that the local health care system is just weeks away from being swamped, but administrators at St. Francis, the Grand Island hospital, say they are not there yet.

The hospital has erected a negative-pressure respiratory care unit in a tent outside the emergency room and could add 28 beds, expanding to a capacity of 157 beds, to care for additional patients.

At a press briefing Wednesday, Ricketts said three people at St. Francis were on ventilators for breathing support one week ago. That number has now risen to 17, he said. At least seven COVID-19 patients this week have been transferred to other hospitals, including ones in Omaha.

But St. Francis is not at capacity and staff members are staying calm and collected, said Ricketts and Dr. Gary Anthone, Nebraska’s chief medical officer.

“We are deploying resources to be able to address it,” Ricketts said. “People are working very, very hard, in Grand Island, but the plan is working. We have not overwhelmed the health care system.”

Peak is a week and a half away, says Central District Health

'Our resources are being tested': Grand Island hospital's ICU is filling up fast

We are deeply saddened to report the COVID-19 related death of a male in his 80’s at a hospital in Hall County. This death brings the total nu…

Jaime Parr, interim director of the Nebraska State Fair, announced Tuesday that the Grand Island Chamber of Commerce will be coordinating the …

Nebraska National Guard members began two days of COVID-19 testing Tuesday at Fonner Park. The work is being done near the Community Fieldhouse and the Nebraska Building. (Independent/Jeff Bahr)