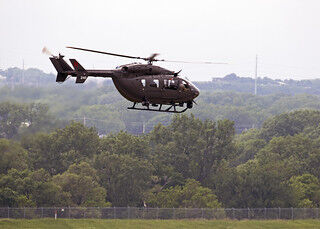 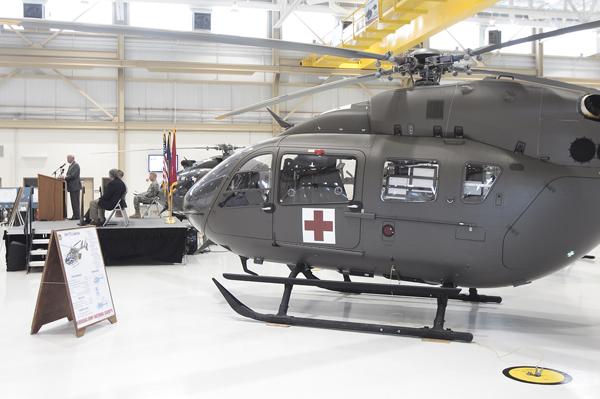 New UH-72 Lakota helicopters are shown at the Army Aviation Support Facility No. 2 in Grand Island in 2011. The aircraft can be used for civil search and rescue, medical evacuation missions, counter-drug operations and more. (Independent/Matt Dixon)

Family members will gather for a sendoff Saturday in Grand Island for soldiers with the Nebraska Army National Guard’s 1-376th Aviation Battalion, based in Grand Island, who are headed to the Southwest border.

The sendoff is not open to the public.

Both the 1-376th Aviation Battalion and the Columbus-based 128th Engineer Battalion will deploy in October in support of the Customs and Border Protection’s mission along the Southwest border.

“Under the direction of U.S. Northern Command and its forward operational command, U.S. Army North, the Nebraska National Guard units’ mission is to assist CBP by providing aviation and engineer support,” according to a news release.

The Nebraska soldiers “will provide mission enhancing support to CBP’s border security operations to enable CBP agents to conduct their law enforcement mission more efficiently,” based on the news release.

Ingalsbe declined to identify the states where the National Guard will be serving.

The sendoff for the 128th Engineer Battalion will take place at a later date.

The deployment to the Southwest could last up to a year.

The Nebraskans will take over for National Guard members from other states.

“This isn’t a surge of troops to the border,” Ingalsbe said. “They’re replacing other guardsmen from other states that are already performing the mission.”

Nebraska has sent National Guard soldiers to the border in relatively small numbers off and on since 2006.

This deployment is “one of the larger, if not the largest” the Nebraska contingent has sent to the southern border, he said.

The Nebraska State Patrol deployed 25 troopers to the Texas-Mexico border earlier this summer, in response to a joint request from Texas and Arizona.

New UH-72 Lakota helicopters are shown at the Army Aviation Support Facility No. 2 in Grand Island in 2011. The aircraft can be used for civil search and rescue, medical evacuation missions, counter-drug operations and more. (Independent/Matt Dixon)