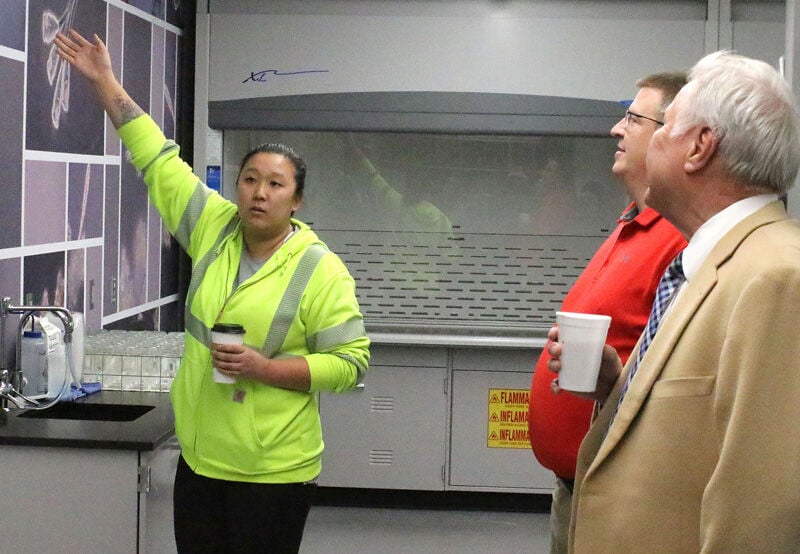 Macy Diehl, left, a lab tech at the Grand Island Waste Water Treatment Plant operations and administrations building names and points out bugs they have found while treating the water over the years during a tour of the addition which includes an expanded lab, Wednesday morning. 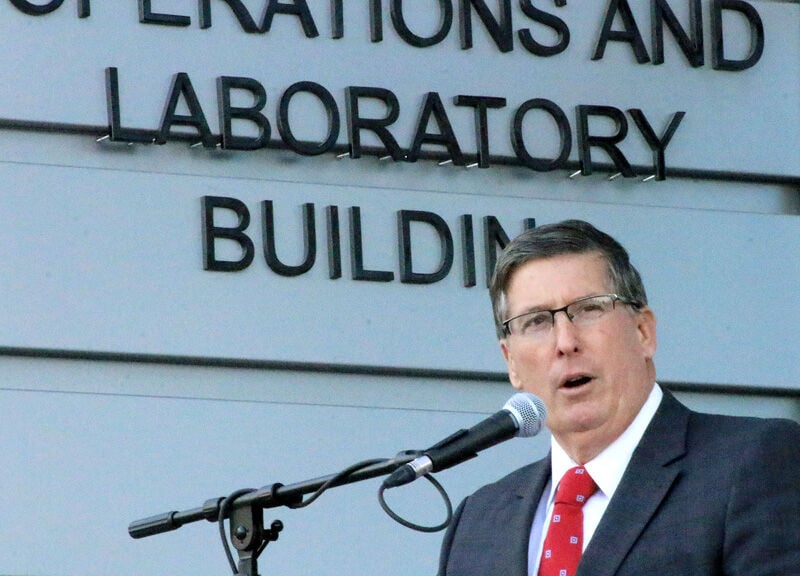 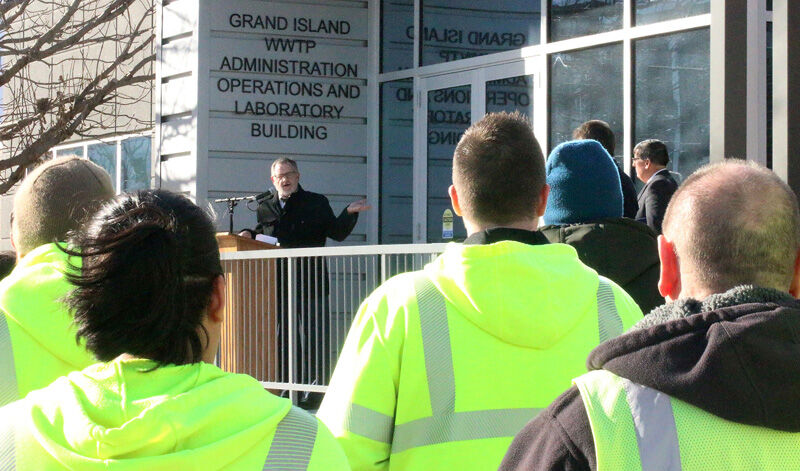 Wastewater Treatment Plant employees listen to a speaker during a ribbon cutting for the addition to the administration and operations building Wednesday morning.

To celebrate, a ribbon-cutting ceremony was held Wednesday at the facility, located at 508 S. Shady Bend Road.

“This proves again that we are building for Grand Island’s future today,” Mayor Roger Steele said. “The efficient and environmentally friendly treatment of wastewater is one of the most important functions of any city. The health of our public depends upon the excellent work performed by our wastewater plant staff who bring to their jobs specialized skills and training.”

The project started under Marvin Strong, Grand Island’s first wastewater plant engineer, and continued through its second engineer, John Menough. It has concluded under the stewardship of its third engineer, Matt Walker.

Among the improvements, the plant’s administration, laboratory and operations building has tripled in size, from its original 3,700 square feet to 11,200 square feet.

“The laboratory was outdated and could no longer hold the necessary equipment,” Steele said. “The old heating and air conditioning system allowed contaminants to pass from other areas into the laboratory that could invalidate the testing that happens in the laboratory. It also posed a health risk for our employees.”

He added, “Simply put, the city had outgrown the original building that was constructed 46 years ago.”

The goal for the city’s public works projects is to accommodate the growth of Grand Island “for decades to come.”

The enlargements at the plant will serve Grand Island for 50 years, Steele said.

“Grand Island is doing an historic amount of public works projects, and these are all being done to prepare Grand Island for the future,” he said.

Rich McKinley of Omaha-based engineering firm HDR said the company was excited to be part of the project.

HDR has been working with the city of Grand Island since 1948, when the city had a population of about 20,000, McKinley said.

“It’s incredible growth. As part of that, your infrastructure continues to have additional needs and we’re glad to be part of helping you to continue to grow that and expand those services,” he said. “This facility represents this community’s commitment to quality water service and environmental accountability, and that’s great for all of us.”

Jeremy Rogers, wastewater regulatory compliance manager, thanked the city for its support and the facility’s employees for their daily efforts.

“Not only is this a nice and new for us as a facility, it provides a level of safety, security and more functionality for our day-in and day-out operations,” he said. “I couldn’t work with a better group of people out here. They all strive to do their very best to not only keep the city in compliance, but just to do the right thing.”

Steele noted that the facility and its staff members have a history of receiving awards for its safety and excellence, and its operations.

In November, the facility won two awards from the Nebraska Water Environment Association: the NWEA Silver Safety Award and a 2021 Scott Wilber Award for Outstanding Facility.

The city receives these honors on an almost yearly basis.

“Not only are your tax dollars invested in this building expansion that we celebrate today, they are also invested in employees who bring a commitment of excellence to work every day, and for that I thank them,” Steele said. “Congratulations to everyone who helped expand this city for the benefit of future generations.”

Macy Diehl, left, a lab tech at the Grand Island Waste Water Treatment Plant operations and administrations building names and points out bugs they have found while treating the water over the years during a tour of the addition which includes an expanded lab, Wednesday morning.

Wastewater Treatment Plant employees listen to a speaker during a ribbon cutting for the addition to the administration and operations building Wednesday morning.