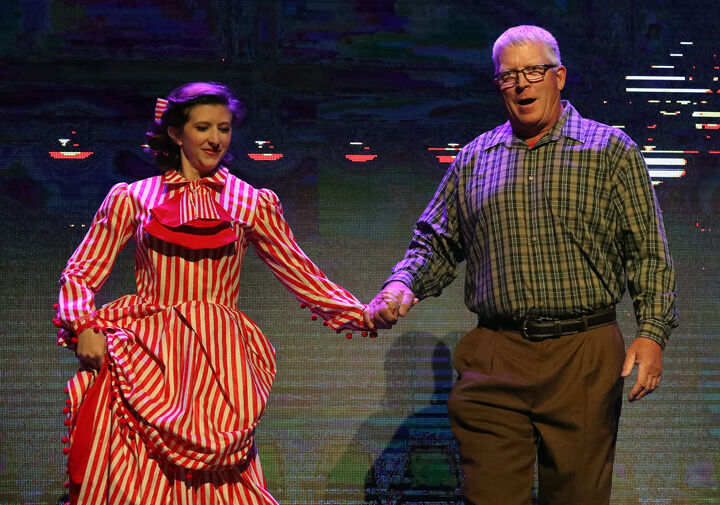 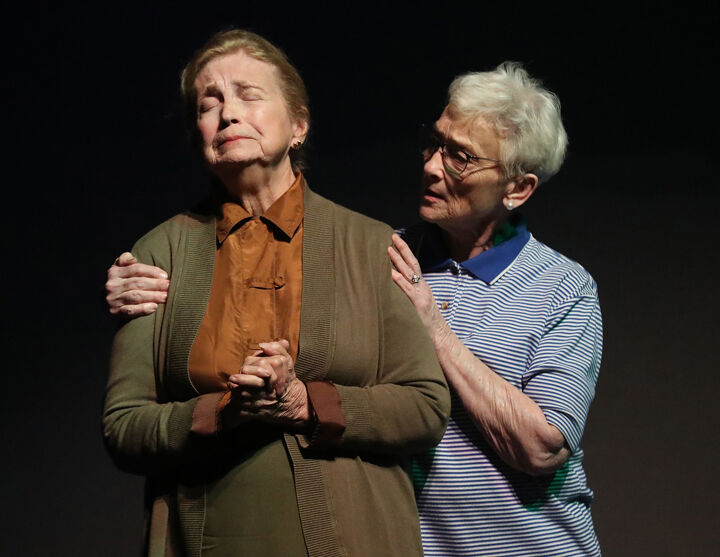 Elizabeth Hodtwalker plays Margaret Alexander, and Kaye Bayne plays her friend Hattie in the musical "Alexander, Baseball Legend." Monday night the ladies really got into character during rehearsal at the Northwest High School auditorium. The show runs Friday-Sunday at the school. (Independent/Josh Salmon) 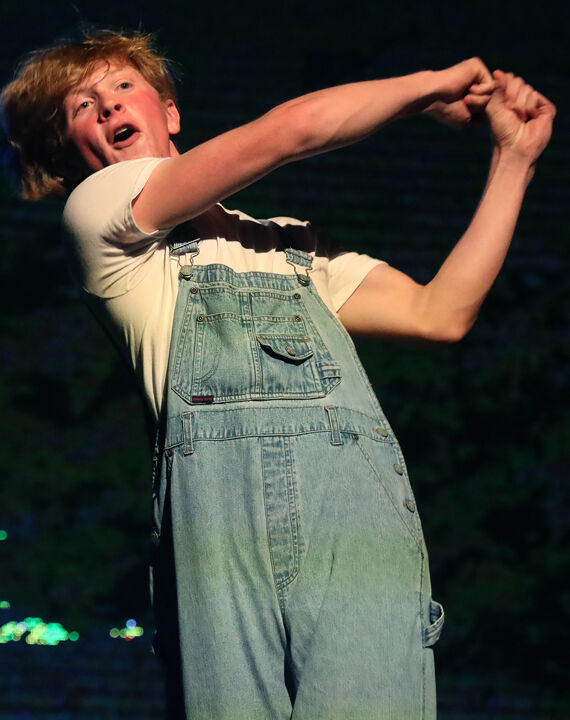 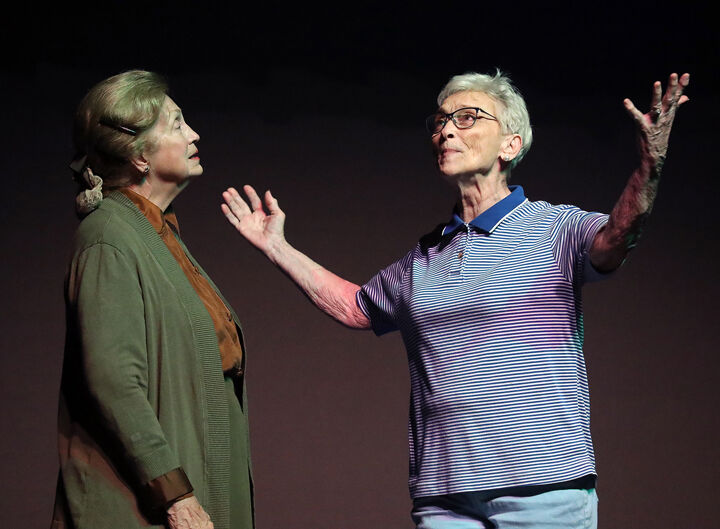 Even though St. Paul hosts Grover Cleveland Alexander Days every July, many people don’t know much about the Howard County native.

Alexander, who grew up in Elba and St. Paul, is a member of the Baseball Hall of Fame. His role in the 1926 World Series is part of baseball lore. Pitching for the St. Louis Cardinals, the Nebraskan won two games in that series against Babe Ruth’s Yankees and saved another game, getting a key strikeout against Tony “Poosh ‘Em Up” Lazzeri. Alexander’s life was the subject of a 1952 film, “The Winning Team,” starring Ronald Reagan and Doris Day.

Even some members of the cast of “Alexander, Baseball Legend” are learning about the old fireballer.

Baird Sautter, who lives near Palmer, says the best thing about being in the show is learning about Grover Cleveland Alexander.

“I’ve lived in the St. Paul area for 30-plus years and really didn’t know that much about him,” Sautter said. “So getting the facts is pretty interesting.”

Other members of the cast say the same thing.

Sautter and the rest of the cast will present “Alexander, Baseball Legend” Friday through Sunday at Northwest High School. Proceeds will go to the Grand Island Northwest Education Foundation.

The actors say Carol Lowry Quandt, the show’s writer and director, studied Alexander’s background thoroughly and is a stickler for details.

“But she does her research,” Hodtwalker said.

“Alexander, Baseball Legend” debuted in July 2019 in St. Paul. This is the first time it has been staged in Grand Island.

Much of the cast returns from 2019, including Scott Sahling and Steffany Tartaglia, who play Alexander and his wife, Aimee.

Tartaglia and her husband, Paul, were newcomers to St. Paul when rehearsals began the last time around for “Alexander, Baseball Legend.” Paul is a Howard County deputy.

“I’m excited to do it again. I’ve been doing musical theater forever — been performing since I could walk and talk in some way, shape or form,” said Tartaglia, a graduate of Gross High School in Omaha.

During the play, she sings “Someone to Watch Over Me” and a couple of original songs, “Learning About Baseball” and “While You’re Away.” Together, she and Sahling sing “Over There” and “Alexander’s Ragtime Band.”

Alexander’s 63 years of life, which ended in 1950, included major challenges. During World War I in France, he was exposed to mustard gas. An explosion left Alexander with epilepsy, which plagued him all his life. Many people attributed his seizures to alcoholism, which Alexander also battled.

Fame “gets to everybody sooner or later,” but Alexander seemed like a hardworking, down-home farm boy, Sautter said.

Tartaglia notes that Alexander and Aimee were married and divorced twice.

“But they stayed friends until the end. They exchanged letters their entire lives,” she said.

Tartaglia’s character provides moments of comic relief “to kind of break up some of the heaviness of the show,” she said.

Also adding humor are three old men sitting on a bench, commenting on the proceedings. Sutter, Glenn Knuth and Chad Nabity portray those men, who are meant to be sitting in front of a St. Paul drug store in 1907. They’re enjoying the show “because we’re crazy old men,” Knuth said.

Quandt is retired from teaching English at Northwest, where she assisted with plays, speech and musicals.

In assembling her own ballclub, she recruited a number of friends and people with whom she worked at Northwest.

One of them is Mitch Fisher, who was in several shows at Northwest.

Fisher, 22, said he likes just “hanging out with Carol.” She has a lot of energy and passion, “especially for this show.”

Fisher, who was also in the show in 2019, plays Boogs, the catcher, as well as a couple of other characters.

His younger brother, Danny, is also in the musical.

Hodtwalker and Kaye Bayne, another cast member, go way back with Quandt.

“We have been Carol’s friends for 40 years,” Hodtwalker said.

Whatever Quandt asks for, they say yes in a heartbeat, she said.

“Alexander, Baseball Legend” has evolved since 2019. A couple of songs have been added.

So has a character. Jim Truell plays Alexander’s father, William, a man who wasn’t seen two years ago.

“She’s had more time to develop it,” Hodtwalker said.

Another Northwest graduate is Nate Mead, who plays four characters, two of whom are memorable — Lou Gehrig and Ernest Hemingway.

Three members of the Nabity family take part in the play. Northwest student Carter Nabity, 16, plays the young Alexander and a couple of other characters. His father, Kyle, also plays three parts. It is the first acting experience for the elder Nabity, who teaches sixth-grade science at Westridge Middle School.

“One of the main reasons I wanted to do this is because this’ll probably be the only time that I ever a chance to be in a production with my son,” said Kyle, 47. He and his son are “making good memories.”

Sahling and other actors say this year’s production will be better than the last one. In 2019, it was hard to get everybody together for rehearsals, Sahling said.

Mead says the show has great music and tells a good story.

“But it’s also going to be super funny,” he said.

Sautter says the characters are real and the original music is “just fantastic.” Quandt did a wonderful job writing the script, he said.

To miss this show, Sautter said, would be “a missed opportunity.”

“The story is great. The people are great,” Tartaglia said. “It’s really cool to be part of something that happened in this community.”

Elizabeth Hodtwalker plays Margaret Alexander, and Kaye Bayne plays her friend Hattie in the musical "Alexander, Baseball Legend." Monday night the ladies really got into character during rehearsal at the Northwest High School auditorium. The show runs Friday-Sunday at the school. (Independent/Josh Salmon)