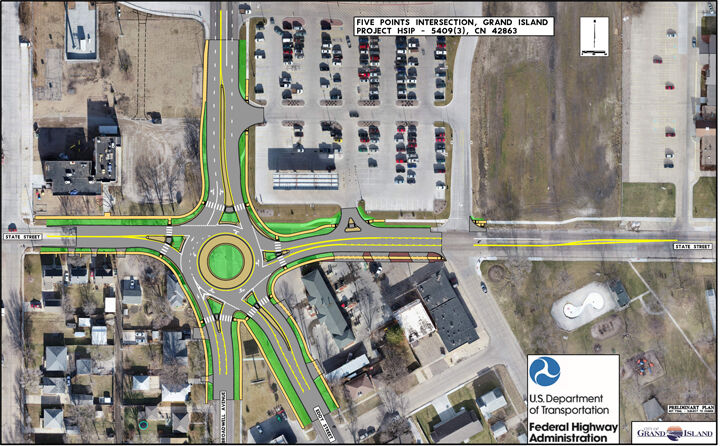 Courtesy/Olsson and City of Grand Island

This is the preliminary plan for the Five Points roundabout. 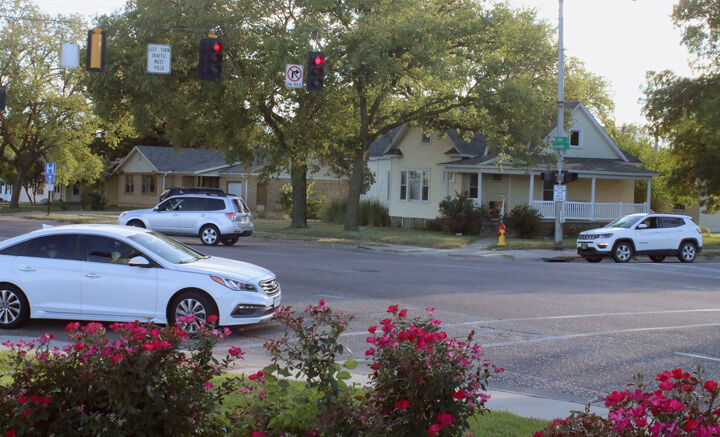 The current Five Points intersection will be replaced by a roundabout in 2022 or 2023. State Street, Broadwell Avenue and Eddy Street intersect at the Grand Island landmark.

When the Five Points roundabout is built in a year or two, a house probably will have to be removed to make way for the project.

That house is at 1801 W. State St., at the intersection of West State and North Broadwell Avenue. The yellow home is kitty-corner to the Super Saver Fuel Express.

Plans for the roundabout show the edge of the travel lane would be right at the corner of the house, which is “way too close to be comfortable,” said Grand Island Public Works Director John Collins.

The Nebraska Department of Transportation has the final say as to whether the house goes.

But the city has recommended that it be moved. The lot could be sold to an adjacent property owner. If not, the property could remain vacant.

In preparing to build the roundabout, NDOT is working on right-of-way acquisition for 10 pieces of land, some of which have the same owners.

NDOT officials really like the idea of a roundabout at Five Points, Collins said. It’s one of the “higher-scoring projects that they have” regarding safety, capacity and cost vs. benefit, he said.

NDOT is the lead agency on the project, which was initiated by the city.

“They’re actually negotiating the right of way on it as we speak,” Collins said of state officials.

The city obtained funds from NDOT’s safety committee for the project, he said. The city always seeks additional funds when possible “so that we can save city dollars.”

The project will be a standard one-lane roundabout, except for one stretch that will have two lanes. That will come from the north on Broadwell headed south, which will have a right-turn lane onto State Street.

The city expects the roundabout to see heavy truck traffic, so it will be designed to handle semi-trucks. Those drivers should feel comfortable using it, Collins said.

The roundabout also will allow a left turn from any road to another. Currently, left turns aren’t allowed at the intersection from Eddy onto State.

Some city officials began talking about a Five Points roundabout at least 10 years ago.

After Skagway closed, the owners of the Five Points Super Saver worked with the city in the design of its parking lot so that a roundabout could be installed down the road.

All of the businesses at the intersection will see better access, Collins said. The exception is True North Church, where the access will remain the same.

If things go well, construction will begin in 2022 with completion in 2023.

But if problems develop with right-of-way negotiations or with budget issues, work might not begin until 2023.

It’ll take a year to build the roundabout.

Because the work will be done in phases, “You’ll have access to all the businesses,” Collins said.

During construction, he hopes people will avoid the area as much as possible.

Still, the job will take some time, so it will be the subject of discussion.

Collins pointed to the construction on Old Potash Highway, which is nearing completion.

But in the meantime, “I’m inconveniencing almost everybody in town,” Collins said.

You might be able to find someone who’s “not having a problem, but you’ll have to look,” he said.

Collins knows that some are opposed to a roundabout at Five Points.

Everyone has areas where they don’t feel comfortable driving, he said.

Collins has heard from a number of people who don’t feel comfortable on Highway 281, especially when they turn left off of 281.

“Because the head-to-head left turn lanes are not offset like they should be,” he said.

But the actual benefits of a roundabout are well-known and documented, he said.

In the entire city of Grand Island, Five Points should be the best place for a roundabout, Collins said.

Having five legs coming together “makes for a very awkward intersection,” he said.

Right now, Five Points is the scene of more collisions than it should be.

Officials expect the number of collisions to drop substantially after the roundabout is built.

For the first three months, the people who haven’t used roundabouts “are going to have trouble and they’re going to cause it to clog up for everybody,” he said. But as was the case with the 13th Street roundabout, “once you get through that training period, it should function much better.”

Right now, few pedestrians use the Five Points intersection. Collins assumes that’s because they “don’t want to cross all that concrete all at once.”

Five Points will not be the biggest roundabout in Grand Island. The one on Wilmar Avenue is bigger.

Instead of just one place where there are two lanes, Wilmar has double lanes on the north leg and the south leg.

Two former female patients of Kearney psychiatrist Rey De Los Angeles say he had sexual contact with them in the 1990s.

Grand Island family of accident victim not satisfied with verdict

Both of the boy's legs were broken, leading to six operations.

"He violated me and so many other underaged women. He did not have the right to do that," one woman, identified as Victim 4, said at Gregory Dightman Sr.'s sentencing.

No sense of direction

You have probably heard the saying, “He couldn’t find his way out of a paper bag,” well I think they wrote that about me. I have no sense of d…

Drought causes French river to be crossable by foot

Man acquitted in deaths of 7 motorcyclists

Man acquitted in deaths of 7 motorcyclists

Courtesy/Olsson and City of Grand Island

This is the preliminary plan for the Five Points roundabout.

The current Five Points intersection will be replaced by a roundabout in 2022 or 2023. State Street, Broadwell Avenue and Eddy Street intersect at the Grand Island landmark.