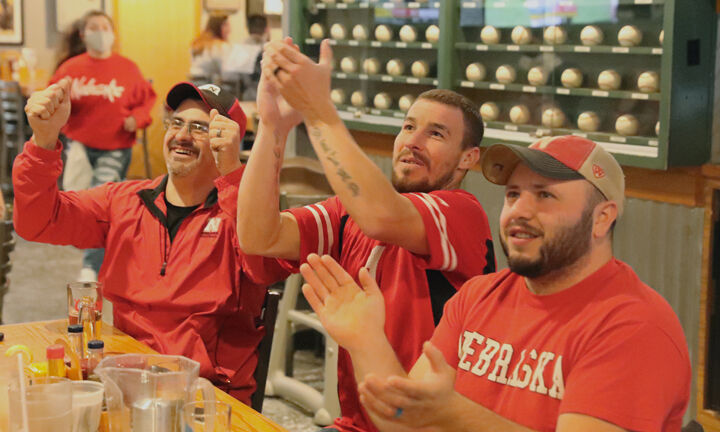 A group of Husker fans celebrate a good play Saturday at Balz. Cheering on the Huskers in their first game of the season (from left) are John Trejo, Ty Craig and Anthony Allen. (Independent/Josh Salmon) 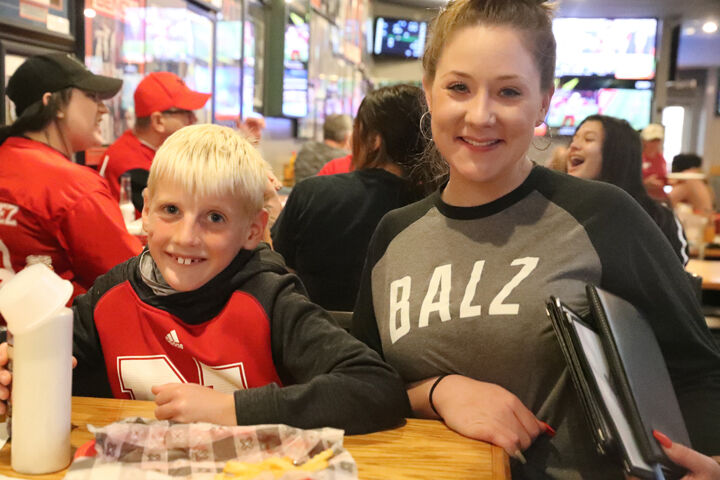 Conley Feeken, an 8-year-old from Burwell, watched part of the Huskers’ game Saturday at Balz with his mother, Chelsey. At right is Lexus Christensen, a Balz waitress. (Independent/Josh Salmon)

Forget about the score. Husker fans were thrilled to have their football team back Saturday afternoon.

They were happy to drag out their red clothes, celebrate the good plays and complain about officiating and bad tackling.

When the Huskers posted the game’s first touchdown, Michelle Craig stood on her chair at Balz, danced, jumped and whooped.

Was her brother, Anthony Allen, glad to have the Huskers back?

“It goes without saying,” said the 27-year-old Grand Island man.

What did Allen think about the Huskers’ good start?

“Exactly as I expected,” he said.

When the Huskers and his other favorite teams don’t do well, Allen says the game turned out “not the way I’d hoped.”

Allen doesn’t always go to bars to watch the Huskers.

“I usually just yell at my own TV,” he said.

Over at Bandits, Melanie Cox was definitely glad to be watching. She said she might be “one of the biggest Husker fans alive.”

Cox was with her sister, Lisa Nichols.

When they were little girls in Central City, they would watch Nebraska-Oklahoma games at viewing parties attended by five families, including kids.

When she lived in Arizona for 13 years, “I went to a Husker bar and watched every single game.”

No matter the outcome, Cox was going to watch the whole game. She screams to the very end, she said.

“The games bring people together,” she said. “It’s kind of like a holiday.” One reason she likes the Huskers is that her son went to UNL and lives in Lincoln.

“I’d like to have the obnoxious part left out, if you don’t mind,” Cox said.

Tim McMullen, one of the owners of Bandits, was glad the Huskers were back.

Bandits opened at 9 a.m. Saturday, instead of 11. The establishment offers something different for every Husker game. Saturday morning, Bandits was specializing in Bloody Marys and breakfast pizza.

At one of Bandits’ tables, Kendra Ramos said she didn’t expect the Big Ten would play football this year. Another person at the table, Blake Anderson, said he was glad to see the Huskers playing again.

A woman at the table, who was paying a lot of attention to her phone, said she’s not a Husker fan.

But, Ramos said, they were glad to have her friend around anyway. “We don’t function without her.”

Another Bandits customer was Perky Rother, 59, of Grand Island.

Rother heard the play on the radio.

“We didn’t watch it. We were putting in fence that day,” said Rother, who grew up one of 18 children in Wolbach.

Since then, he’s seen the play “a hundred times” on TV.

Rother has family ties to the program. “I had a couple of nephews play at Nebraska,” he said. They were Tim and Brad Rother, both graduates of Bellevue East.

Craig and the five other members of her group were the first ones at Balz Saturday morning.

Anthony, her brother, said the other people at the table were not necessarily friends, just relatives.

Craig and Anthony have happy memories of watching Husker games in Benkelman, where they grew up. Their late father made homemade chips and salsa for every Husker game. “They were the best,” says Craig, who now lives in Doniphan.

Anthony’s favorite Husker player of all time was Gabe Fries, a Benkelman native.

Also at the table was their aunt, Cindy Trejo.

“I am so absolutely overjoyed to have my team back again,” Trejo said.

Allen’s wife, Jordan, was sitting across from him. She doesn’t know as much about football as her husband does, but said she knows to cheer at the right time “and boo when I know to boo.”

Rachel Winget, the general manager of Balz, was also ecstatic.

“It feels like a normal Saturday in October, and that feels great,” Winget said. “It’s loud. It’s positive. It feels somewhat normal.”

Other than beer, what were customers ordering?

How could Winget watch the game and keep customers happy at the same time?

Sharing a table at Balz were Chelsey Feeken of Burwell and her 8-year-old son, Conley.

“He’s been a sports lover from the time he could walk and grab a ball,” Feeken said.

At another table, the biggest Husker fan was Mike Gatto.

Gatto, a Lincoln native, has lived in Grand Island for 23 years. He works part time for the events staff at UNL. He takes tickets at Memorial Stadium and works at other Nebraska sporting events.

At the age of 5, he attended a Nebraska-Oklahoma game with his father and brother.

Gatto, 47, is proud the Huskers played a big role in the return of Big Ten football.

“We got it done. The Huskers had a voice,” he said.

In the first half, Gatto was satisfied with the offense but wasn’t pleased with the Blackshirt defense, especially the defensive backs.

But he was optimistic, expecting a great Nebraska fourth quarter.

He even had his lucky shoes on.

“I bought them this year. I’ve been waiting for Husker season to wear them,” Gatto said.

“We’ve got to play better defense,” Puente said in the first half. “We can’t tackle right now.”

His son, Jackson, is a senior at UNL.

Pat and Brody were wearing Oklahoma shirts. Pat’s mom was an Oklahoma fan. His father, like Pat, divided his affection between the Huskers and Sooners.

40 North Tap + Grille also was flying a Husker flag, literally. A Nebraska flag was posted outside the restaurant.

Inside the 40 North Sports Lounge, Kriste Molacek was at a table of four, watching the game intently. At 40 North, one of the TV screens is 9 feet tall and 16 feet wide.

Even though the Huskers trailed 38-14 at the time, Molacek felt good about her team.

“You’ve got to stay positive,” she said.

Another table was filled with Alan and Joanna Usher and their three children, Aiden, Axel and Jade. Joanna’s parents, Jay and Jay Vavricek, own the place.

Aiden, 9, wasn’t happy with the way things were going. “We need to pass it more,” he said glumly.

Again, another football Saturday in Nebraska.

A group of Husker fans celebrate a good play Saturday at Balz. Cheering on the Huskers in their first game of the season (from left) are John Trejo, Ty Craig and Anthony Allen. (Independent/Josh Salmon)

Conley Feeken, an 8-year-old from Burwell, watched part of the Huskers’ game Saturday at Balz with his mother, Chelsey. At right is Lexus Christensen, a Balz waitress. (Independent/Josh Salmon)