In his final year, Walnut teacher gets a big honor
0 comments
Share this
{{featured_button_text}}
1 of 3 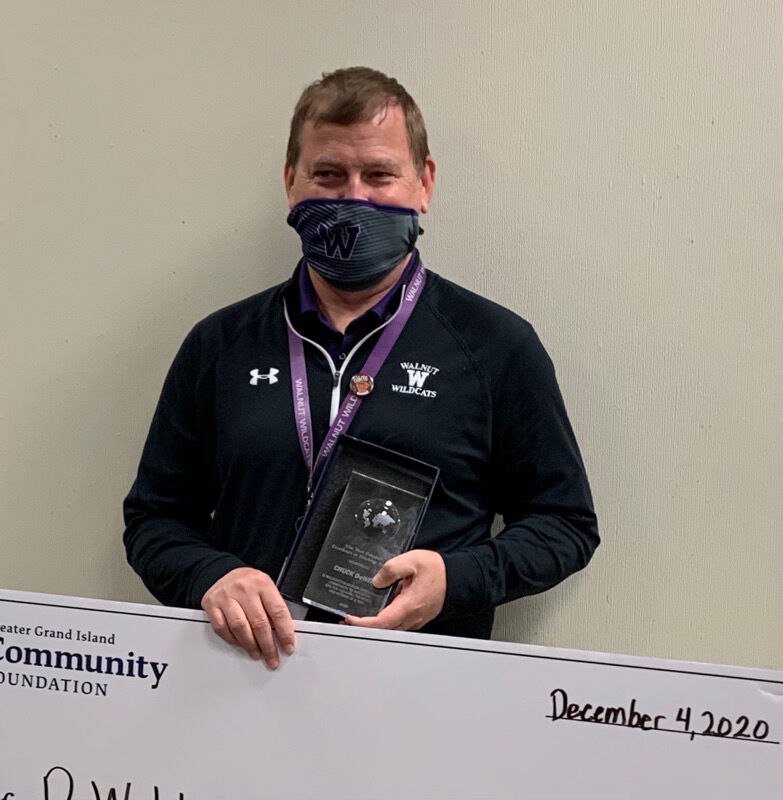 Walnut Middle School teacher Chuck DeWitt was presented with the 2020 Kim West Dinsdale Excellence in Teaching Award Friday morning. The honor comes with a $5,000 check. DeWitt has spent his entire 30-year teaching career with Grand Island Public Schools — 26 of that with Walnut Middle School. He will retire at the end of the school year. 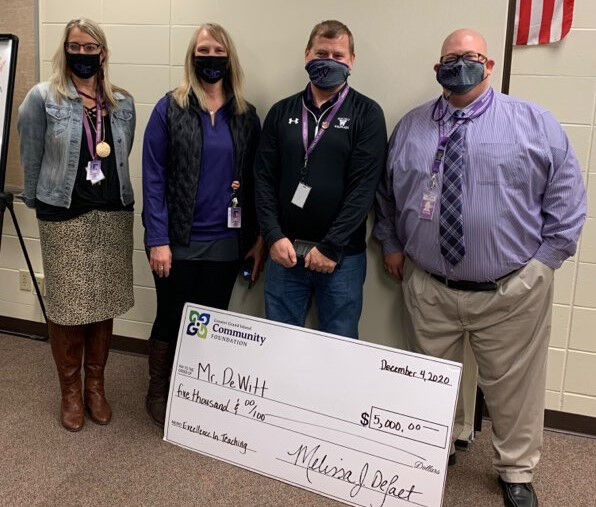 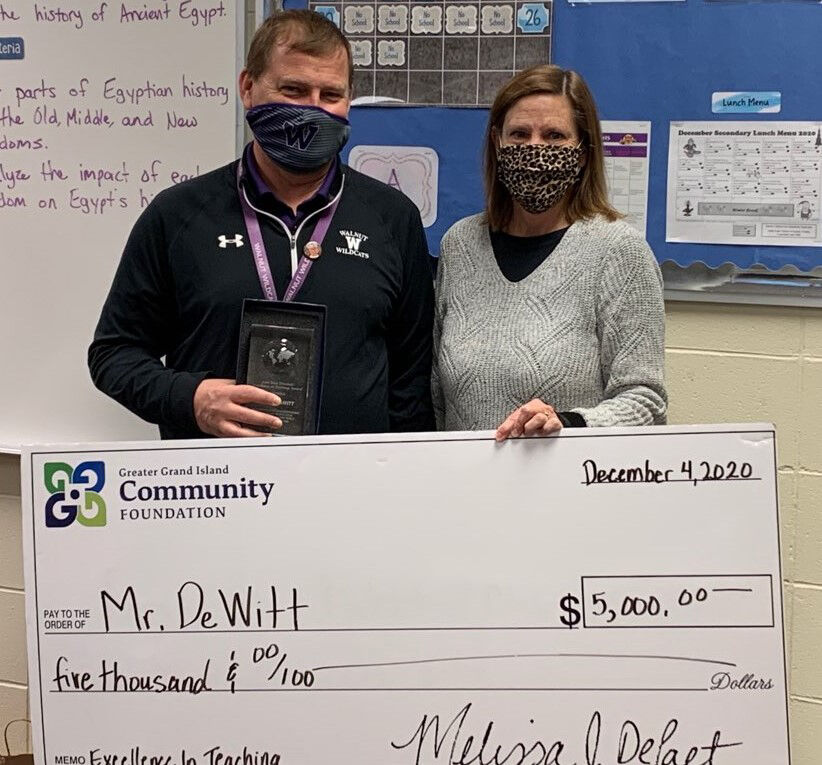 Walnut Middle School teacher Chuck DeWitt was joined by his wife, Kristi, for an award presentation Friday morning. Chuck DeWitt was presented with the 2020 Kim West Dinsdale Excellence in Teaching Award. The honor comes with a $5,000 check.

After 30 years with Grand Island Public Schools, Chuck DeWitt got a very nice award Friday morning in his final year of teaching.

DeWitt, who teaches at Walnut Middle School, was presented with the 2020 Kim West Dinsdale Excellence in Teaching Award. The honor comes with a $5,000 check.

The announcement was made via Zoom. Looking on were Kim and Scott Dinsdale and Melissa DeLaet and Marci Tompkins of the Greater Grand Island Community Foundation.

DeWitt, in his 26th year at Walnut, teaches sixth-grade science and math. He is also the school’s athletic director.

He was nominated by a parent and student, who said, “Mr. DeWitt is kind, he cares about his students, and he teaches them and makes them do their work as best as they can.”

The nomination went on to say he “was just what my son needed as a teacher. Mr. DeWitt taught him things far beyond math and science, such as appropriate behavior, how to make friends, respect for others and responsibility.” The mother described how DeWitt supported her son’s strengths and worked to find ways to increase his achievement in more challenging areas. She thinks her son sees school in a positive light and believes DeWitt is a huge reason why.

In making the announcement, Tompkins said one reason DeWitt decided to become a teacher was “because of a great teacher he had,” named Richard Neuman.

“He wanted to continue Mr. Neuman’s legacy of being a good role model, giving students humor and a ‘solid background in science,’” Tompkins said. “Mr. DeWitt has made it his life’s work to challenge students to achieve excellence and inspire positive character. He believes he makes this visible to students by being a living example of these characteristics. Mr. DeWitt shows students he believes in them and cares for them by creating strong relationships, so they know he feels they are capable of great things.”

Neuman was DeWitt’s seventh- and eighth-grade science teacher when the future teacher was attending Stuart-Menlo School in Iowa.

In an interview Friday, DeWitt thanked the Dinsdales and the Community Foundation for “going out of their way to make sure that they reward and acknowledge that we are working hard over here and doing what the kids need.” The recognition “is a great thing and I just want to let them know that they are so much appreciated for that.”

A career spent in Grand Island

DeWitt, 55, has spent his entire teaching career in Grand Island. His first four years were at the then-Progress School at Grand Island Senior High.

He grew up in Rushville, a town known for producing quarterback Kelly Stouffer. “Good friend of mine,” DeWitt said.

After graduating from Rushville High School in 1983, DeWitt got a degree from the University of Nebraska at Kearney.

His wife, Kristi, is a Grand Island native.

DeWitt coached wrestling for more than 15 years, started a traveling soccer group and coached the GISH girls soccer team. Twenty years ago, he created a spring soccer club for Walnut. He helps with the school’s Builders Club, which encourages students to be leaders and community volunteers,

Making a move to Kearney

In preparation for retirement, the DeWitts moved to Kearney a couple of months ago. That’s the home of both of their children, Adam and Hannah. The latter teaches at Sumner-Eddyville-Miller.

The DeWitts also have a granddaughter, who is 9 months old.

DeWitt “decided to retire now while I ‘m still young enough to enjoy” grandchildren. He also has some ideas concerning education. “So I’m going to try to do some other things,” he said.

In Kearney, Kristi works as a para, a job she also performed in Grand Island.

DeWitt isn’t looking forward to walking away from teaching in May. “It’s not going to be easy.”

They’re moving into a new house, so he figures some of the money will go toward “something in the house.”

In addition, “I love to fish, so there’s probably some equipment coming my way.”

2020 has been a difficult year

Because of COVID-19, “this year has been hard on every teacher,” DeWitt said.

But he’s happy with in-person learning. “Us being in the classroom is 100% what our kids need.”

Teachers “appreciate the community doing what they’re doing to try and remain diligent in keeping everybody healthy. We’re going to all get through this, and the kids are going to benefit the most if we all keep fighting for keeping them in their rooms. That’s No. 1 right now.”

In teaching, DeWitt believes it’s all about relationships.

“You have to know who your kids are before you can teach them — before they respect you enough to learn from you,” he said. “So I make it a point to know each one individually as much as possible. I think every teacher should, and most of them do. Then once you build that relationship, the teaching part comes easy.”

Walnut Middle School teacher Chuck DeWitt was presented with the 2020 Kim West Dinsdale Excellence in Teaching Award Friday morning. The honor comes with a $5,000 check. DeWitt has spent his entire 30-year teaching career with Grand Island Public Schools — 26 of that with Walnut Middle School. He will retire at the end of the school year.

Walnut Middle School teacher Chuck DeWitt was joined by his wife, Kristi, for an award presentation Friday morning. Chuck DeWitt was presented with the 2020 Kim West Dinsdale Excellence in Teaching Award. The honor comes with a $5,000 check.