Barrett Stinson is one of the most recognizable people in central Nebraska. He probably has taken your photo. Even if he hasn’t, you’ll still recognize him.

For more than 24 years, he has been a familiar figure along the sidelines of sporting events, meetings, accidents and countless other activities throughout the area.

Stinson is retiring this week from The Independent, making this a sad time for his colleagues and everyone who appreciates good photography. Officially, his last day is Saturday, which is also his 63rd birthday.

At one of his farewell gatherings this week, Stinson said he appreciated working at a newspaper that valued good photos. He was able to do something he’s good at, and get paid for it.

He also appreciates the people with whom he has worked. He has enjoyed hiring and mentoring young photojournalists during the years.

It goes without saying that Stinson enjoys taking photos. But he also liked being part of something and “making a good product.” Hopefully, he said, his work has made the “community a better place to live in some way.”

She was touched by seeing the extent to which his coworkers admire him and appreciate what he does.

She didn’t realize how much photographers and reporters work together.

“And I just thought that was so cool, because teamwork is something that is really difficult to find in the workplace sometimes, where you work together in tandem,” Mitzi said.

Her husband has made many great friendships during the years, both at the newspaper and within the community, she said.

Stinson said he appreciates the good working relationship he has enjoyed with the local law enforcement community and with area schools. He’s glad that he has earned their trust, but he also is grateful for the courtesy. People didn’t have to let him come into their homes or their place of work, but they have.

He has enjoyed meeting so many kinds of people and being part of their experiences. He hopes that his photos make a good memory for their families. For readers, in general, he hopes his photos “touch people’s lives and hopefully make them feel something.”

His photography is admired by others in the newspaper profession. The many awards he has received attest to that.

“I don’t think I’ve ever seen anybody better at capturing a story and photos, and also capturing moments of emotion,” says former Independent Managing Editor Jim Faddis, who retired recently. “Grand Island’s going to miss Barrett’s photos, chronicling the history of the area.”

To get a good picture of Stinson, just think about the challenges he has faced.

He knows the pressure of meeting deadlines, something he will no longer have to worry about.

His career predates digital photography. He remembers many a night on assignment when he would turn a hotel bathroom into a darkroom, and use a hair dryer to dry the film.

Stinson grew up in Los Angeles, graduating from Fairfax High School in 1975. Before he moved to Nebraska, he served a number of internships, three of them at the Los Angeles Times.

“I was freelancing for the LA Times and doing OK. But I wanted a staff job,” so that he could work on photography day in and day out.

He applied only to newspapers that respected photography. Before he sent his photos to a newspaper in the middle of Nebraska, he had never heard of Grand Island.

When he arrived for his interview in 1996, he found an airport very different from the one from which he had departed.

“My flight was delayed out of LAX,” so he arrived late at Central Nebraska Regional Airport.

The old terminal was being remodeled. He found no one inside the airport, and he needed to use the bathroom.

“The only restroom was a Porta Potty outside,” Stinson said.

The California boy took a cab to a local hotel. It was late March. The next morning, he opened his hotel curtains “only to see corn stubble and snow as far as I could see.”

That morning, he wrote in his journal, “God, what am I doing in this barbarous place?”

His wife is a native of Gothenburg. They had met in California and gotten married in December 1992.

If they moved to Grand Island, they’d be 90 minutes from her parents and five or six hours from his parents in Fort Collins, Colo. He also took the job because he saw potential. The man who preceded him, Eric Gregory, had made a good start.

During the years, Stinson has learned a lot about agriculture. Freshly arrived from LA, he knew next to nothing about farming.

“For all I knew, a combine was what the football players went to,” he said.

During much of his time at The Independent, the newspaper competed against the World-Herald and the Lincoln Journal-Star.

“And I’d like to think we were pretty well-respected there. I know the other photographers would tell me that,” Stinson said.

But the goal wasn’t to be better than those papers.

The best parts of his job have been the people he has worked with, and the photo teams he has built.

Stinson enjoyed being able to teach young photographers, and to share know-how with them.

He tried to create a good environment and give them “the freedom to do good work.”

He has also had fun working with Zach Mayhew and Carissa Soukup, the newspaper’s current videographer.

Another great part was working with many freelancers during the years, he said. There have been too many to mention, but he’s especially thankful for the efforts of Mayhew, Lauri Shultis and Jimmy Rash, “who all have been talented and loyal photo freelancers for many years.”

Like many people in his profession, Stinson figured he would work two to five years in Grand Island and then “I’ll move on to a bigger, better thing,” he said.

“There really wasn’t, it turned out, a better thing for me. I just enjoyed the life here. My wife and I made a life and we became part of the community. We like the life we have here.”

Mitzi Stinson has worked at Eakes Office Plus for more than 24 years. The Stinsons own two very popular Corgis, Reggie and Cassie.

Partly because of his talent, Stinson has been able to convince his bosses to buy good cameras and accessories.

Stinson says he has been very fortunate, and that working as a newspaper photographer has been a privilege.

Because of all those years, he often receives greetings around town.

When the Stinsons shop at Sam’s Club, another customer will say, “Hello, Barrett.”

Barrett will smile and nod at him.

A few moments later, Mitzi asks, “You have no idea who that is, do you?”

Barrett responds, “No, but I remember taking their picture.”

A Grand Island mother of three will face off against a longtime incumbent to represent Ward A on the Grand Island Public Schools Board of Education. 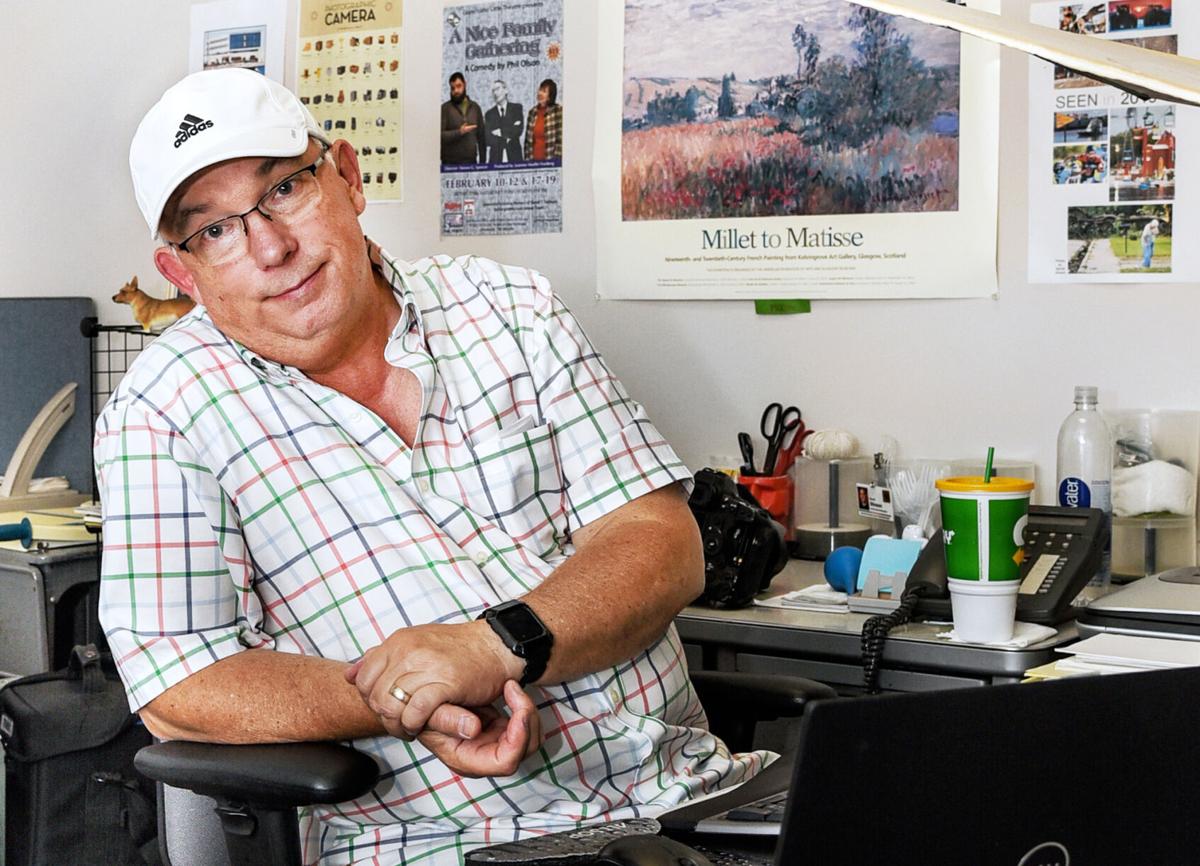 Barrett Stinson has been a familiar presence around Central Nebraska for more than 24 years. (Courtesy Mike Leggott) 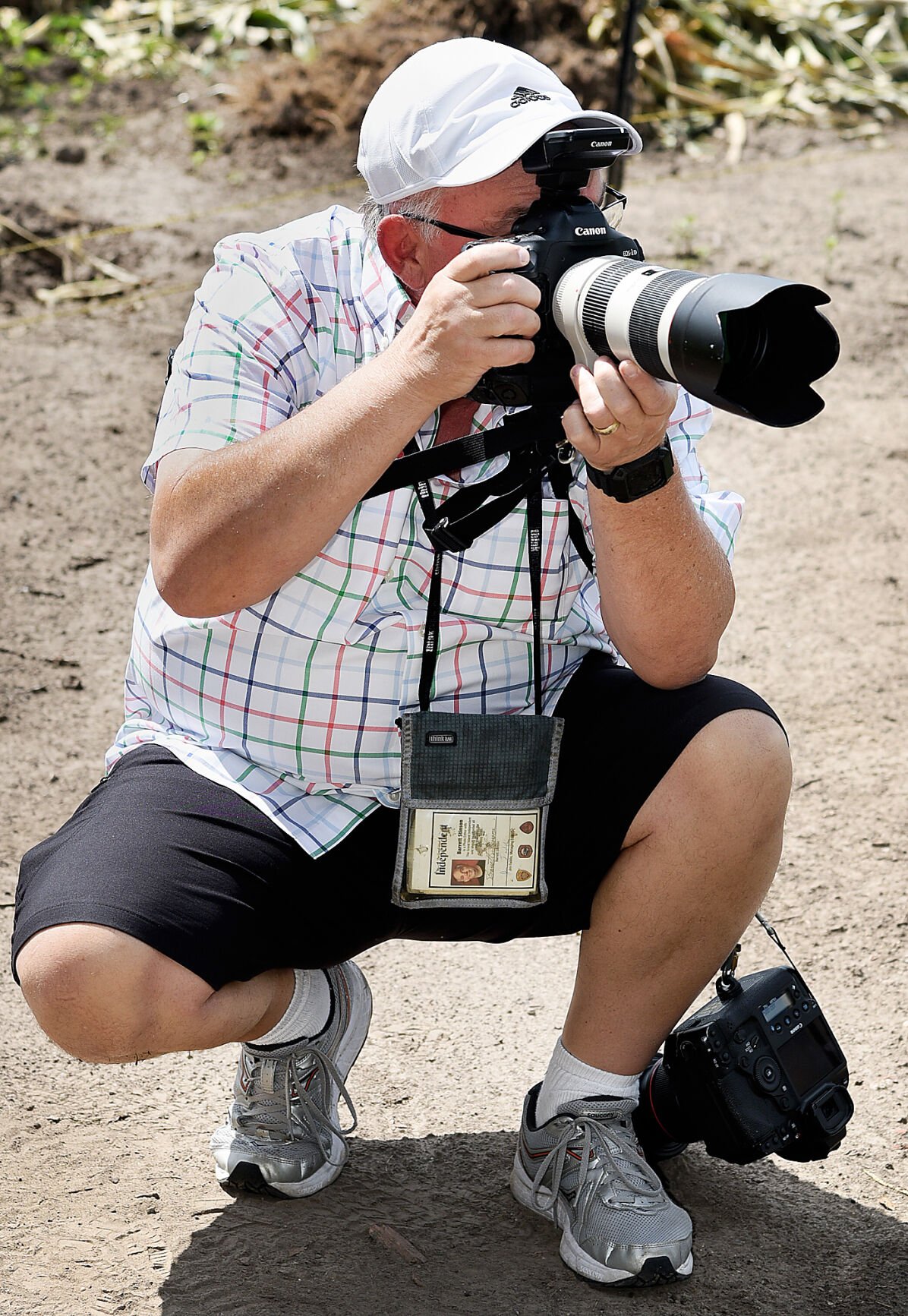 ID tag around his neck, Barrett Stinson has been a familiar presence around Central Nebraska for more than 24 years. (Courtesy Mike Leggott)