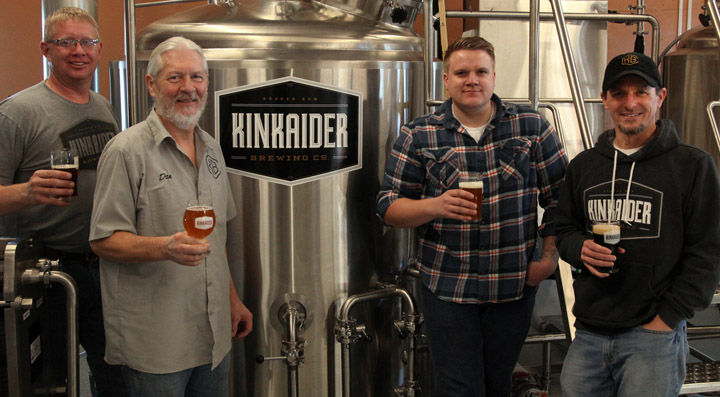 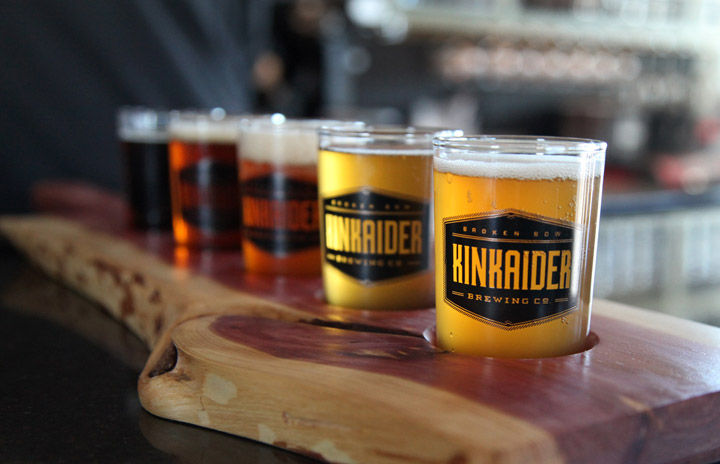 A flight of beer is ready to go to a customer Wednesday afternoon at Kinkaider Brewery in Broken Bow. Flights allow customers to taste several different beers in smaller qualities. (Independent/Zach Mayhew) 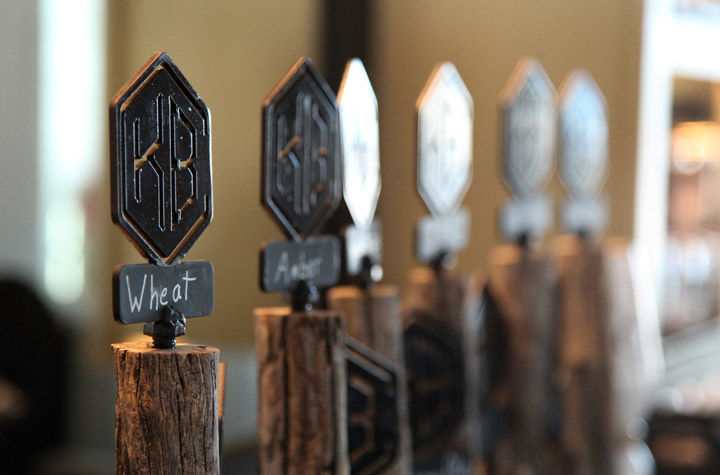 Kinkaider Brewery features several style of beer on tap in their taproom. Their taps are made of old fence post from a ranch near Thedford. (Independent/Zach Mayhew) 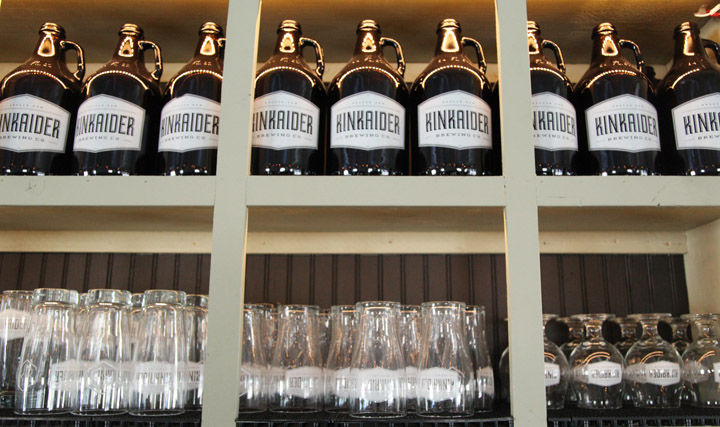 Kinkaider Brewery's shelves are stocked full of different options for customers to drink in the taproom or to take their fresh brews home. The company is the only brewing company in Nebraska to offer crowlers, a 32 ounce alluminum can sealed right after filling from the tap. (Independent/Zach Mayhew) 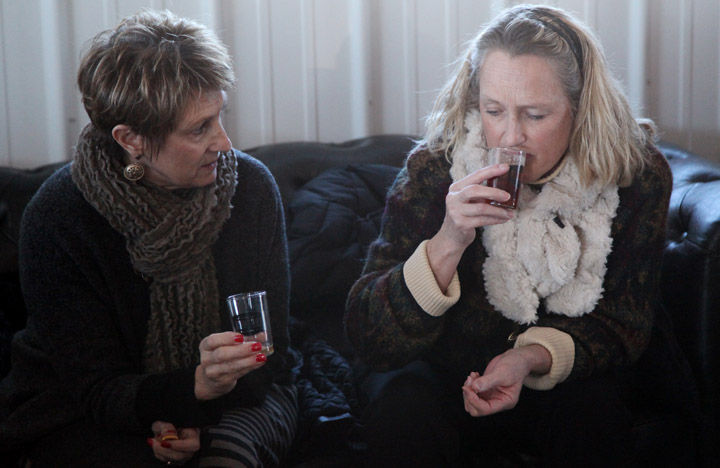 BROKEN BOW — As the community in Custer County has grown, residents of Broken Bow have put their own mark on their town by developing everything from hotels to car washes.

Now, however, four Nebraskans are making their mark on something else — the craft beer movement.

On Dec. 27, Cody Schmick, Nate Bell and Barry Fox of Broken Bow and Dan Hodges of Thedford opened Kinkaider Brewing Co. The goal, they said, is to bring a new taste to the region and to beer lovers across the state.

“We just want it to be a place where people walk in and say ‘Oh, this is something I haven’t seen,’” Schmick said.

The idea for the brewery began just over a year ago, Schmick said.

He, Bell and Hodges had long shared a love of home brews that soon developed into a business plan. The three were moving ahead slowly when Fox got involved about six months ago.

Fox suggested they take inspiration from wineries, which use scenic locations and grow ingredients on site. He also offered up a piece of farmland near the edge of town, which he and his wife use as a pumpkin patch.

Schmick, Bell and Hodges loved the idea, and everything started moving much faster than they planned.

“It’s become something far better than what I had in my mind,” Schmick said.

They decided to call the brewery Kinkaider after the 1904 Kinkaid Act, which significantly shaped development in the area.

Large photos of the Kinkaid Act era decorate the walls, and the tap handles are hand crafted from old hedge posts. At the same time, sleek furnishings and a bar provide a modern look. When the weather is nice, customers will be able to relax on the patio, sip a beer and look out across the Sandhills.

To complete the connection to the area, the owners also plan to incorporate the farmland surrounding the brewery and local growers with ingredients to use in brews such as jalapenos, corn and pumpkins. In the future, they said, they might do farm-to-table style events, and customers could take a beer along with them as they walk the property.

That desire to reflect the area’s character extends to the brewery’s focus — the beers.

Schmick and Fox run the front of the house aspects, while Bell and Hodges use more than 30 combined years of experience in craft beer to create the signature sips.

They use fresh Sandhills water in the brews, Schmick said, which can’t be recreated. That, along with intense attention to detail, result in truly excellent beers, Bell said.

“It’s a beautiful mix of science and art,” Bell added.

They have populated the menu with classic styles done with a Kinkaider twist, such as a porter with notes of chocolate, coffee and toffee, an American wheat with hints of citrus and a pale ale with flavors including grapefruit and florals.

But they don’t plan to stop there.

The hope, Bell said, is to take people from familiar to surprising.

“We have a great opportunity with 12 taps to really push people’s expectations a little bit,” he said.

The tap currently includes one of those surprises in the jalapeno ale, an award-winning beer Hodges has worked for 10 years to perfect. Ultimately, Schmick said, they hope to expand people’s concept of craft beer and get them to try something new.

“I want people, especially here, to taste an IPA and say ‘Oh, that’s what an IPA is supposed to taste like,’” he said.

The taps also feature brews from other Nebraska establishments, and wine and whiskey are available for those who want to experience Kinkaider but don’t like beer.

Bell said with the development of other breweries in the area, such as Thunderhead in Kearney and Scratchtown in Ord, they hope to attract beer lovers from across the state.

“It is a fantastic opportunity to develop tourism in this area,” he said.

And though they have only been open about a week, word already seems to be spreading. Groups came in even before opening hours to check out the new site, and Schmick said many people came with family from out of town over the holidays.

Mike and Karla Denker and Jeanne Reynolds of Lexington came in last week with Mike and Kathy Tierney of Broken Bow. They enjoyed the decor and the variety of the beers available, Karla Denker said, and there isn’t anything like it in Lexington, Mike Denker said.

“It’s a good addition to the community,” Kathy Tierney said.

That’s what they are hoping for, Schmick said. As Kinkaider Brewing Co. grows, he said, all of the owners hope people in the area feel a personal ownership and want to show off “their” brewery.

“We wanted this to be the community’s brewery,” he said.

“This just gives everybody the opportunity to brag about something else.”

One of the hunters was flown to Lincoln because of his serious injuries.

Daniel J. Cervantes' crime, which took place on June 3, involved Fentanyl. He possessed a firearm while handling the drug.

Grand Island man sentenced to 10 years for distribution of methamphetamine

LINCOLN — Raymond L. Moreno of Grand Island was sentenced Monday in federal court in Lincoln to 120 months in prison for one count of distribu…

Grand Island City Council approved a redevelopment plan and TIF support for the proposed Conestoga Mall project, as well as a zoning change.

A flight of beer is ready to go to a customer Wednesday afternoon at Kinkaider Brewery in Broken Bow. Flights allow customers to taste several different beers in smaller qualities. (Independent/Zach Mayhew)

Kinkaider Brewery features several style of beer on tap in their taproom. Their taps are made of old fence post from a ranch near Thedford. (Independent/Zach Mayhew)

Kinkaider Brewery's shelves are stocked full of different options for customers to drink in the taproom or to take their fresh brews home. The company is the only brewing company in Nebraska to offer crowlers, a 32 ounce alluminum can sealed right after filling from the tap. (Independent/Zach Mayhew)