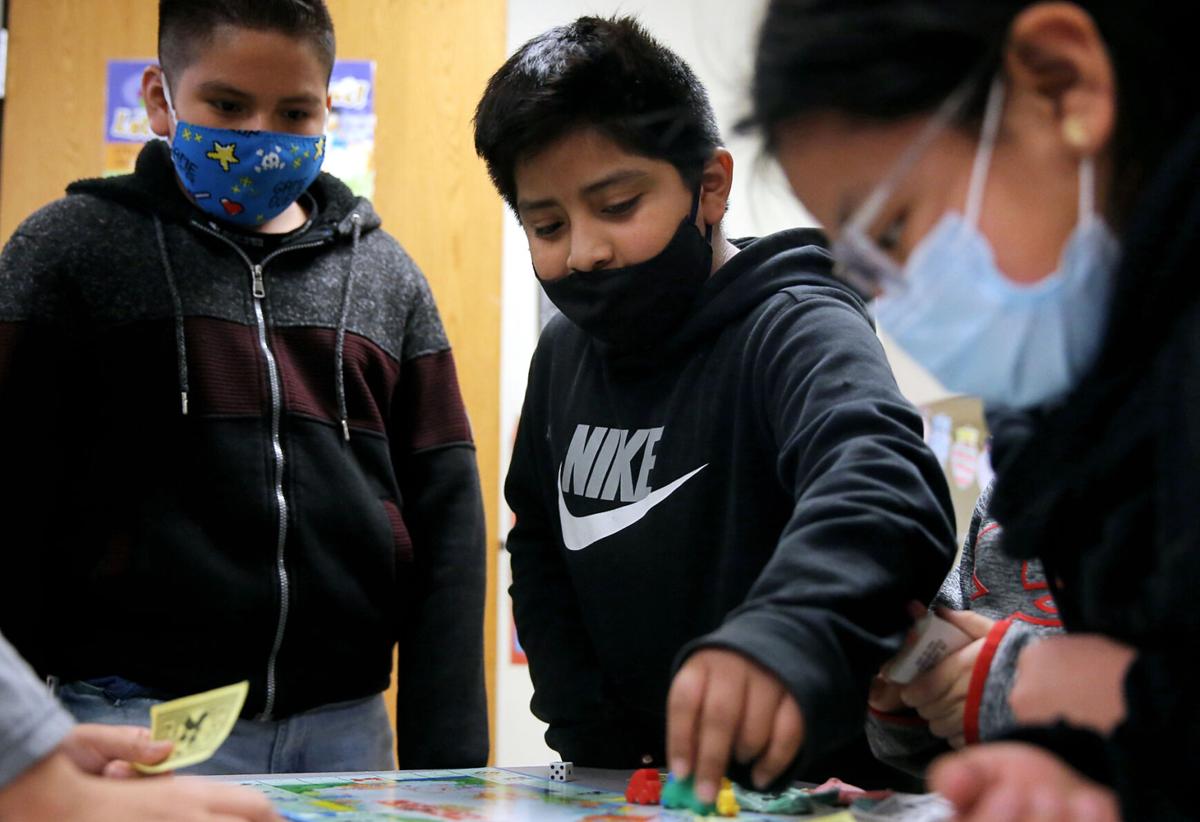 (From left to right) Howard Elementary fourth graders Gustavo Domingues, Eliseo Bernabe and Brenda Lucas play a game of Monopoly Junior during indoor recess on Wednesday, Feb. 17. During indoor recess, students can grab their friends and play different games or do different activities like building or drawing. (Independent/Carissa Soukup) 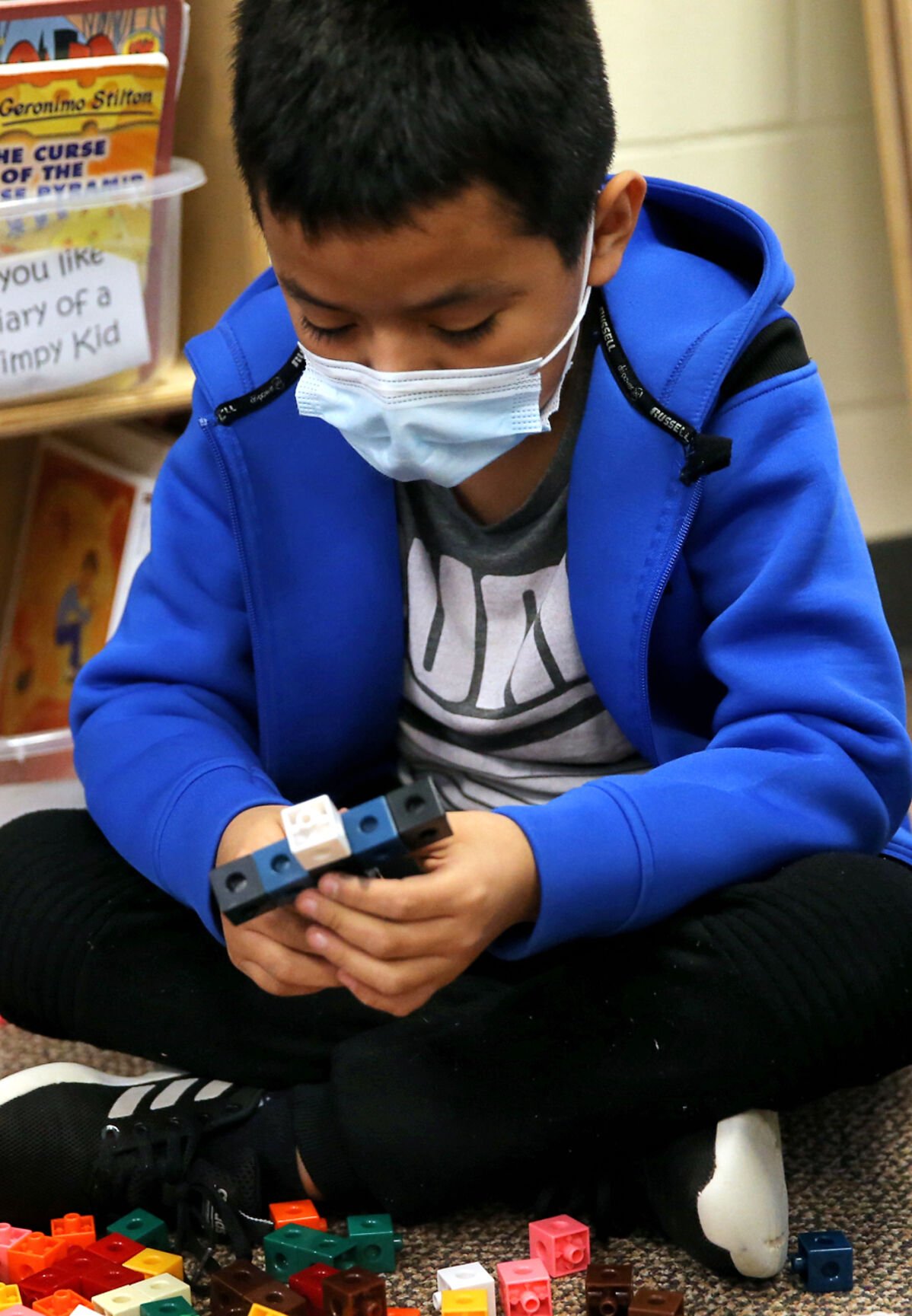 Santos Jose Chich, a fourth grader at Howard Elementary, builds with connecting blocks during indoor recess on Wednesday, Feb. 17. The cold temperatures have forced the students to remain inside during recess. (Independent/Carissa Soukup) 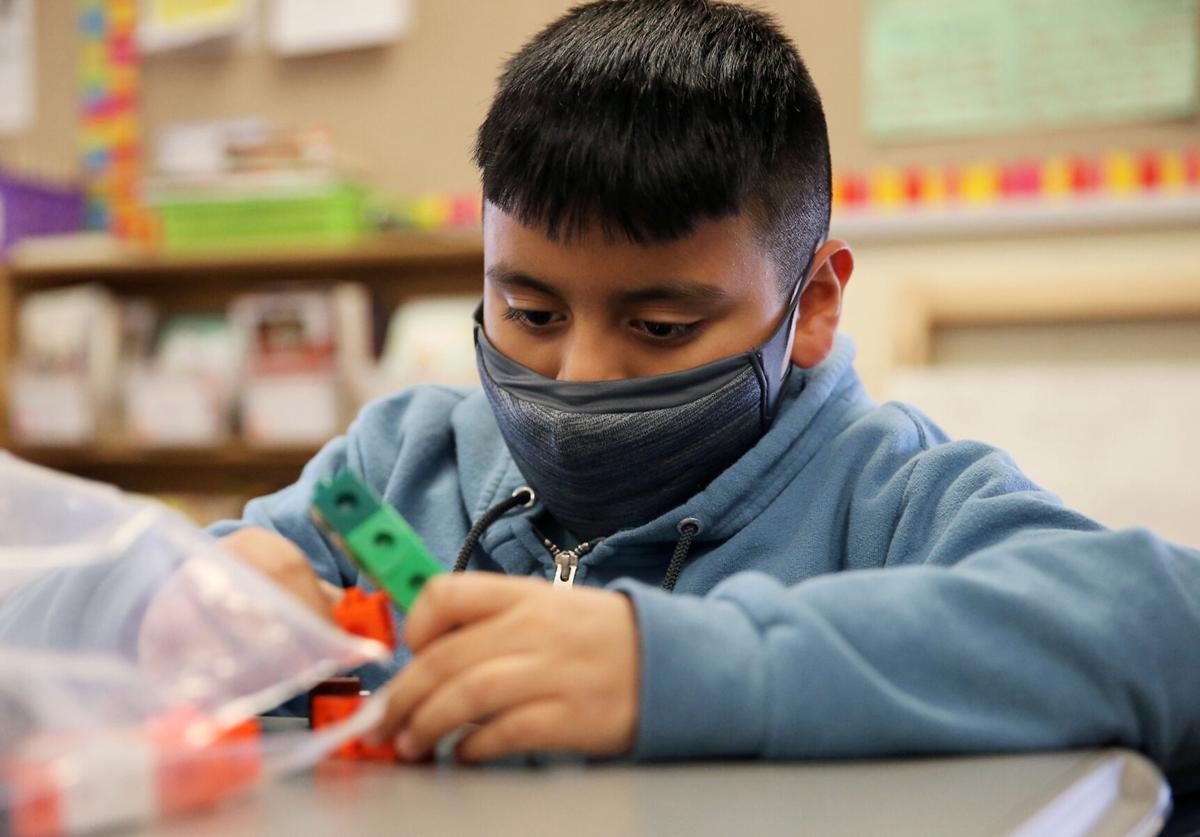 Howard Elementary fourth grader Josiah Costilla builds with connecting blocks during indoor recess on Wednesday, Feb. 17. Students can play a variety of games or do different activities like building or drawing during indoor recess. (Independent/Carissa Soukup)

Robin Dexter, associate superintendent for Grand Island Public Schools, said the district’s guidelines call for students to stay inside for recess if the wind chill is 20 degrees or colder or “when precipitation or playground conditions warrant staying inside.”

The guidelines state that when the temperature is between 20 and 29 degrees Fahrenheit, outdoor recess is limited to 15 to 20 minutes.

“They usually get in a group of friends and decide what games they want to play,” Feik said. “The kids get really creative with the games that I have. They have to follow directions and rules, work together and be competitive. Sometimes, there is art we are working on, so they will color, draw or do things like that. We have blocks that they can build with, too.”

Fourth-grader Ayla Chess said the blocks are fun to play with during indoor recess. She said she usually plays with them by herself, but sometimes will do so with her friends.

Fourth-grader Santos Chich said sometimes he and his classmates will just chat with each other during indoor recess.

Feik said the challenge is not being able to have kids go outside and “run around” due to the cold.

“They have so much energy, so I have to find ways for them to get rid of that energy and use it up,” she said. “Then, after lunch, they still have three hours of school left. So I try to involve a lot of movement in the classroom. They will move around the classroom and move their legs a little bit. We try to give them as much movement and activity as possible.”

Chess said Feik will ask her and her classmates to do laps around the classroom, do push-ups, sit-ups and bungees in the classroom to get some form of physical activity during the school day.

“But even as cold as it is, I would rather be outside,” she said.

Schnitzler said at the beginning of the school year, the school opened its doors at 7:30 a.m. to conduct temperature checks and for students to have free breakfast. As a result, she said parents have adjusted to not dropping their kids off earlier than 7:30 a.m., meaning no kids were left standing outside in the cold this week.

Schnitzler said that some families called in and chose not to bring their children to school because of the cold temperatures earlier this week. She said Howard’s kindergarten class has been doing indoor dismissal — where teachers will bring students out to their parents, rather than dismissing everyone outside.

Across the district, Dexter said the cold temperatures this week have not affected either dismissals or attendance.

“We really didn’t see a drop in attendance Monday, either,” she said. “The most impact was at the high school probably because the students’ cars wouldn’t start or they just weren’t going to get up and get out.”

At Cedar Hollow School — a feeder school for Northwest Public Schools — Principal Scott Mazour said students there also are doing indoor recess due to the weather. He said the school utilizes its gym for indoor recess whenever possible, but otherwise it takes place in the classrooms.

“We have been indoor recess for quite a while now,” Mazour said. “I just credit both our kids and our staff. It is not just indoor recess, but the challenges that COVID has created. It has just been a perfect storm this year and everyone has had incredible patience and teamwork to make it an enjoyable year, regardless of outside influences and circumstances.”

Mazour said, due to the cold temperatures on Monday, Cedar Hollow had an indoor dismissal at the end of the school day.

“What that means is the kids stayed in their classrooms and a couple of us (staff members) go out and get names as parents are coming in,” he said. “Then, we relay that on to the gals in the office and they broadcast over the loud speakers who those kids are and they will walk directly out to their rides. That worked out well and limited the time kids were outside.”

Mazour said one of the challenges with the cold weather — particularly with middle school students — is getting them to dress appropriately.

“A lot of kids will wear shorts even now. That is something we battle pretty much throughout the year, but it is especially concerning these last few days with the dangerous temperatures,” he said. “We try to put that (communication) in newsletters and also communicate that to individual kids that have that need.”

Dexter said GIPS has educational information on its social media platforms about its students needing to dress appropriately for colder weather. For those students who are in need of coats, hats and/or gloves, she said teachers are good about reaching out to ensure they have them by working with Families in Transition coordinator Holly Boeselager.

Dan Petsch, GIPS director of buildings and grounds, said the district’s buildings will not have any “night setbacks,” meaning its heating systems will remain fully functional at night.

“We do not turn them down at night because otherwise, they will not be able to recover well in these kinds of temperatures,” he said. “But also, it will not tax the utilities as much trying to catch up.”

(From left to right) Howard Elementary fourth graders Gustavo Domingues, Eliseo Bernabe and Brenda Lucas play a game of Monopoly Junior during indoor recess on Wednesday, Feb. 17. During indoor recess, students can grab their friends and play different games or do different activities like building or drawing. (Independent/Carissa Soukup)

Santos Jose Chich, a fourth grader at Howard Elementary, builds with connecting blocks during indoor recess on Wednesday, Feb. 17. The cold temperatures have forced the students to remain inside during recess. (Independent/Carissa Soukup)

Howard Elementary fourth grader Josiah Costilla builds with connecting blocks during indoor recess on Wednesday, Feb. 17. Students can play a variety of games or do different activities like building or drawing during indoor recess. (Independent/Carissa Soukup)