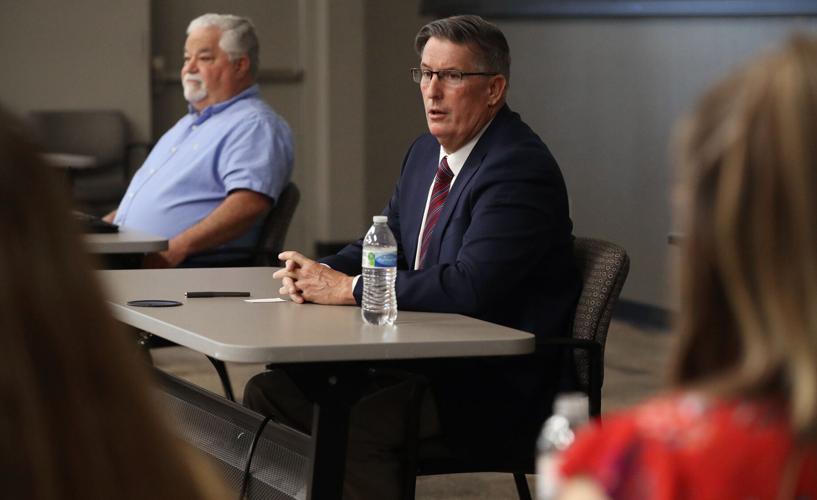 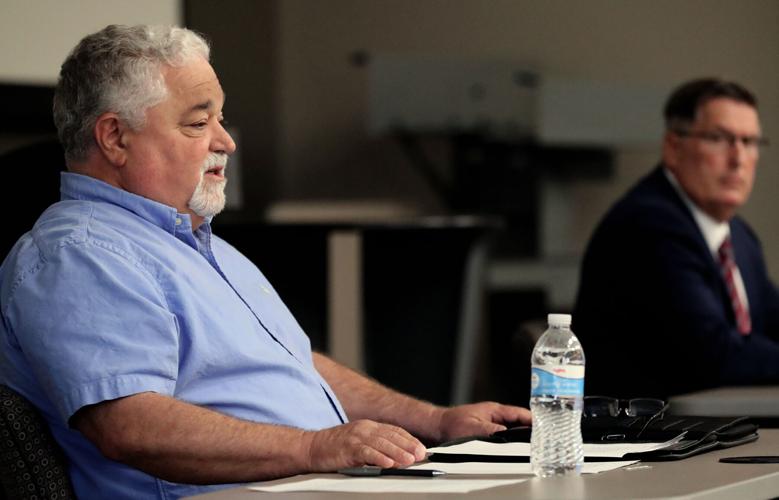 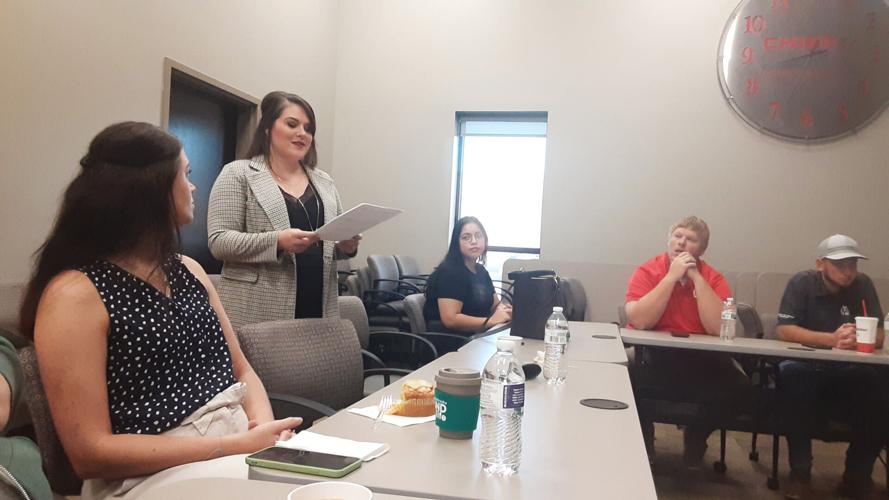 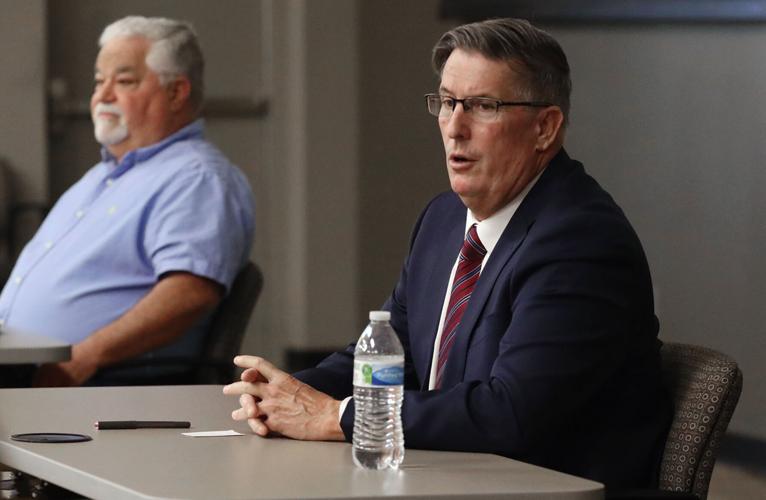 The general election is 47 days away.

A forum for Grand Island mayoral candidates, hosted by Grand Island Young Professionals Tuesday at Chief Buildings, allowed incumbent Roger Steele and challenger Doug Brown to speak on how they would serve the community.

Young Professionals Chair Tarryn Fulton said they felt it was important to meet with both candidates and to hear their perspectives on the city and its future.

“Our members are obviously very involved in the community. We are the community’s future leaders,” she said. “I think some people in our generation are not as involved in government and voting and those things as we could be. It’s an opportunity for us to hear from candidates and maybe take more of an active role in our local government.”

A Grand Island native, Brown has been Central Nebraska Regional Airport operations security manager for 16 years. He retires next week. He is also co-owner of Afternooner’s at CNRA. He served in the U.S. Navy for 25 years.

Steele, originally from Pierce, is an attorney. He has been Grand Island’s mayor for four years, including through the COVID-19 pandemic, and previously served on the City Council.

PrioritiesBrown wants to be a mayor who is accessible to “all people.”

“I will be available. I’m easy to talk to. Talk to them, see what their issues or problems are,” he said. “There’s a lot of things going on out there that people want to get taken care of and just don’t know how to do it or there’s not a way for them to do it. I would like to get out there, work with them and find out what the issues are and what needs to be done.”

For example, said Brown, people have shared their frustrations about the odor at Pier Lake, and how, despite their complaints to the city, nothing has been done about it.

Steele’s priority is continuing the city’s great infrastructure development to meet current and future growth and needs, he said.

His goals include completing North Road improvements from Highway 30 to Highway 2; plans for a south interceptor wastewater pipe, a $100 million project to be done by 2039 and expected to last about 90 years; fixing Diers Avenue congestion; creating an overpass at Broadwell Avenue train crossing; and completing a trail from South Locust Street to Mormon Island.

Police officersAsked what he would address right away if elected, Brown said the “lack of police officers” and “the rise of crime in Grand Island.”

“I look at the paper and the TV every day and I see things going on I just shake my head at,” he said. “It’s not because police officers aren’t doing their job. It’s because of the lack of police officers. They’re doing the best they can.”

It’s a problem that’s been going on for years, said Brown. The city should have been proactive, but is now reactive, which makes it “hard to recover.”

“It’s hard to be reactive when everyone’s going through the same crisis out there,” he said. “It takes a long time to produce a police officer. It’s not an overnight thing. It can take two years before they get trained enough to be able to operate on their own.”

He added, “That really concerns me, that we waited that long to get that excited about it.”

Steele touted the efforts of city council and administration to attract more officers to Grand Island, including such new incentives as increased wages, allowances, retention bonuses and referral bonuses.

Interviewing for a new GIPD chief is being done, as Chief Robert Falldorf is retiring soon.

He added, “Police hiring is a problem nationwide and we didn’t wait for it to become a crisis. We’ve been addressing it all along.”

The candidates were asked how they would address the lack of teachers and need for daycare and early childcare services in Grand Island.

Brown pointed to LB840, via Grand Island Area Economic Development Corporation, which, if approved for renewal by voters in November, would make funds available for new daycare and childcare facilities.

“The teacher problem is a problem across the United States,” he said. “It’s a labor problem with almost every aspect to employment out there. I’ve been in the restaurant business for 20 years and it’s never been as bad as it is now.”

To create entry-level housing, the city has invested tax investment financing to develop nearly 1,000 new units, and has, for example, approved such changes as narrower streets and reduced lot sizes.

“I’ve heard stories more than once about a teacher who is teaching in Grand Island, but they have to live in Hastings because they couldn’t find a house,” he said. “The city absolutely can help with the teacher shortage.”

There is an emphasis on only maintaining “one or two parts” of the city, argued Brown, and a need to “look at all of Grand Island.”

“Grand Island needs to be brought back up,” he said. “Some places are getting a little trashy, and we just need to invest in all areas of Grand Island.”

“We have the codes on the books, but we’ve got trash cars everywhere. If you drive down the end of Fourth Street, you see all those chained-in areas with all those wrecked cars and they’ve been there for years,” he said. “Why is that?”

“We just need to look at Grand Island, clean it up, and get it to where it was,” he said.

Steele disputed the idea that the city is “an unattractive place.”

“I don’t think Grand Island is much different from any other city,” he said. “You can go to any city and find places that may look unattractive, but you have to understand, things like rundown homes, we try to address those, but it’s very difficult.”

Steele cited the Fourth Amendment of the U.S. Constitution, which says “you cannot take life, liberty or property without due process of law.”

It is a complex legal process to take a home away from an owner, to confront absentee owners or to deal with hoarders, he added.

“You’re dealing with people, and there’s not always an easy solution,” he said. “But we try.”

“Both candidates shared a lot of great information,” she said, “and I think with that information our young professionals can make educated decisions when they hit the polls.”

Robert L. Stahl was arrested Friday in the parking lot of Menards after allegedly stealing a pickup from a storage unit on North Shady Bend Road.

Roger Welsch, Nebraska’s most famous humorist and storyteller and a prominent Native activist, died Friday at his home near Dannebrog. He was 85.

The substation will be a place where GIPD officers can come in at the night to do work and will also serve as an access point for the community.

Kearney police are using the crash to bring awareness to motorists traveling on rural roads, especially during harvest season.

Kaitlyn Oswald of Aurora is the 2022 Harvest of Harmony Queen.

“His passing leaves a hole in our hearts,” said Gale Pemberton, a longtime friend who now lives in St. Paul. “I don’t even know where to start. His passion for Nebraska and the Pawnee was immeasurable.”

Study: The asteroid that killed the dinosaurs produced a nearly 3 mile high wave

Study: The asteroid that killed the dinosaurs produced a nearly 3 mile high wave