On the evening of Oct. 15, 1915, Officer Monahan was the officer on duty at the Grand Island police station when a man walked in at 10:15 p.m. and asked him to call for a doctor.

When pressed by the officer for details, the stranger would only say another man was badly hurt in Room 6 at the McAllister building, and needed “a doctor quick,” before turning around and leaving the station.

A few minutes later, a woman walked into the station. She also asked for a doctor, and when the officer replied he was trying to reach one, the woman urged him to hurry or the man would surely die.

Again, Officer Monahan pressed for information, and she sobbed, “he’s been shot.”

The officer grabbed the woman by the arm and recalled practically running from the station to the boarding room near Third and Pine streets.

On the way to Room 6, he passed the man from the station in the hallway. As he entered the room, he found Nevin Nelson, the head wireman for the city electric department, bleeding on the floor next to the bed.

Dr. Kelly was the first to arrive, followed closely by Drs. Weeter and Dugan. Nelson was moved to the bed where the doctors examined the two bullet holes in his chest. Nelson, age 34, was known by Kelly who later recalled him as a physically strong, well-built and powerful man weighing around 175 pounds.

As the doctors dressed his wounds, Nelson continued to call out for help and relief from the pain. Nelson cried out that he did not know what he had been shot for. The wounds were serious enough for Kelly to suggest the man’s wife should be brought to his side.

In the hallway, the officer questioned the man about what had occurred. Peter Lewis, age 47, confessed to shooting Nelson. He turned his gun over to the officer and swore he would not try to get away. The officer left Lewis in the hall and the frantic woman lingering near the door of the room while he went to the next room and called for Nelson’s wife to be brought to the boarding room.

After placing the call, the officer went to Nelson’s bedside and asked him about what had transpired. Nelson replied, “I didn’t do a thing when he shot me.”

Monahan returned to the hallway and placed Peter Lewis under arrest. When Anna Nelson arrived at her husband’s side, Agnes Lewis, age 26, slipped from the room and was taken into police custody.

The next morning, before he knew the fate of Nelson, Peter Lewis told his side of the story to a reporter for the Grand Island Independent. Lewis told the reporter that he was defending himself against an attack. He claimed that he and his estranged wife were attempting to reconcile and had enjoyed an evening together before returning to her room. Inside her room, she pulled a gun from a drawer and threatened to kill herself. After disarming her, he said he placed the gun in his pocket for safekeeping.

A short time later Nelson arrived and made a threatening move toward him before Lewis pulled the gun from his pocket in self-defense.

Nevin Nelson died on Oct. 16, 1915, leaving behind a widow with three children, the youngest just a few months old.

Two days after Nelson’s death, Sheriff Gus Sievers called for a coroner’s jury to be assembled to sort through the tangled webs. The jury assembled at 8 p.m. on Oct. 18, with more than 300 spectators crowded into the courtroom to hear the evidence presented.

The Lewis and Nelson families had been neighbors in the 600 block of West 10th until the summer of 1915, when Peter Lewis claimed “small differences arose, and grew, and grew” in regard to the children of the couple.

Agnes Lewis had a 10-year-old son from a previous marriage, and together the couple had a 4-year-old son. That summer, both children were placed in the orphanage at York. When divorce proceedings began in July, Agnes Lewis moved to a boarding room at the McAllister while Peter Lewis, a traveling salesman, made the Koehler hotel his headquarters while in town.

Former neighbors recalled Peter Lewis as a man who cared for his home and “devoted a good deal of attention to its surroundings” when he was in town, declaring he “always conducted himself as an exemplary citizen.”

The reporter stated the tone regarding Agnes was not the same, and neighbors believed Nelson alone was not “the cause of the trouble” that ended so tragically.

When he took the stand, Peter Lewis was cool and collected as he retold the story given days earlier to the reporter. He claimed to not know the exact relations between his wife and Nelson prior to the start of the divorce proceedings, but that his wife had since confessed to him of the “unlawful relations” and he was willing to forgive her for the sake of the children.

On the night in question, Lewis claimed he took his estranged wife out for dinner and a show in an attempt to reunite the family.

Upon prompting by his attorney, he stated this was a custom he undertook whenever he was in town because his wife’s upbringing was such that she was not given the “raising a mother would and should give a daughter.” His goal was to reunite the family and, on the fateful evening, she had “practically agreed” to the matter before becoming excited and almost falling into a “spell of hysterics.”

It was at this point she grabbed a gun from a dresser drawer and threatened to kill herself before he wrestled it away.

Agnes testified that she told Nelson she would call him after returning from the show. Upon returning to her room at 9:45 p.m., she unlocked the door and, as Lewis left, she went to the toilet before calling Nelson.

Lewis had come back and overheard her phone call.

When Nelson arrived 15 minutes later, she opened the door and Nelson pulled her into his arms while she cried. Nelson said, “You divorced this woman and now you are trying to play her again.”

Lewis replied he wanted to talk to Agnes for a few minutes, but Nelson refused to leave her side.

Lewis testified that he feared Nelson had influence over her and that he “wanted her to conclude and make definite agreements then and there” about leaving together, as he felt “if she remained in Grand Island, she could not rid herself of Nelson” and that which had separated them would not go away.

When he said again “Agnes I need to talk to you,” Lewis claimed Nelson turned on him and said “for two cents I’d get you right now” before he snarled, crouched and came towards him in a menacing way.

Lewis said he could not see if anything was in Nelson’s hand, but he felt threatened as he backed into the dresser and had no way to escape. He claimed he told Nelson to stop before discharging the gun the first time. The second time he tried to fire, the gun failed to discharge. On the third shot he hit Nelson the second time and Nelson sank to his knees.

The jury was escorted to the room to see the scene and the furniture as it had been placed that night.

After three hours of testimony, the jury field trip, and 15 minutes of deliberation, the jury foreman read the verdict at 11 p.m.

The crowd erupted into applause with men queuing up to shake the hand of Peter Lewis in a show of support.

On the other side of the courtroom Nelson’s father-in-law shouted his protest at the outcome. The Independent reported the next day that the most innocent party, and the one who suffered the most, was Anna Nelson.

The reporter stated the issue had been between the two men but pondered whether Nevin Nelson was unjustly assigned the majority of guilt for the relationship between him and Agnes Lewis.

‘We’re in for a rough fall’: COVID-19 hospitalizations, death rates could rise again

The head of the Central District Health Department expects the number of positive COVID-19 tests to increase during the next two months, possibly bringing back the large number of coronarvirus cases the area experienced in April and May. 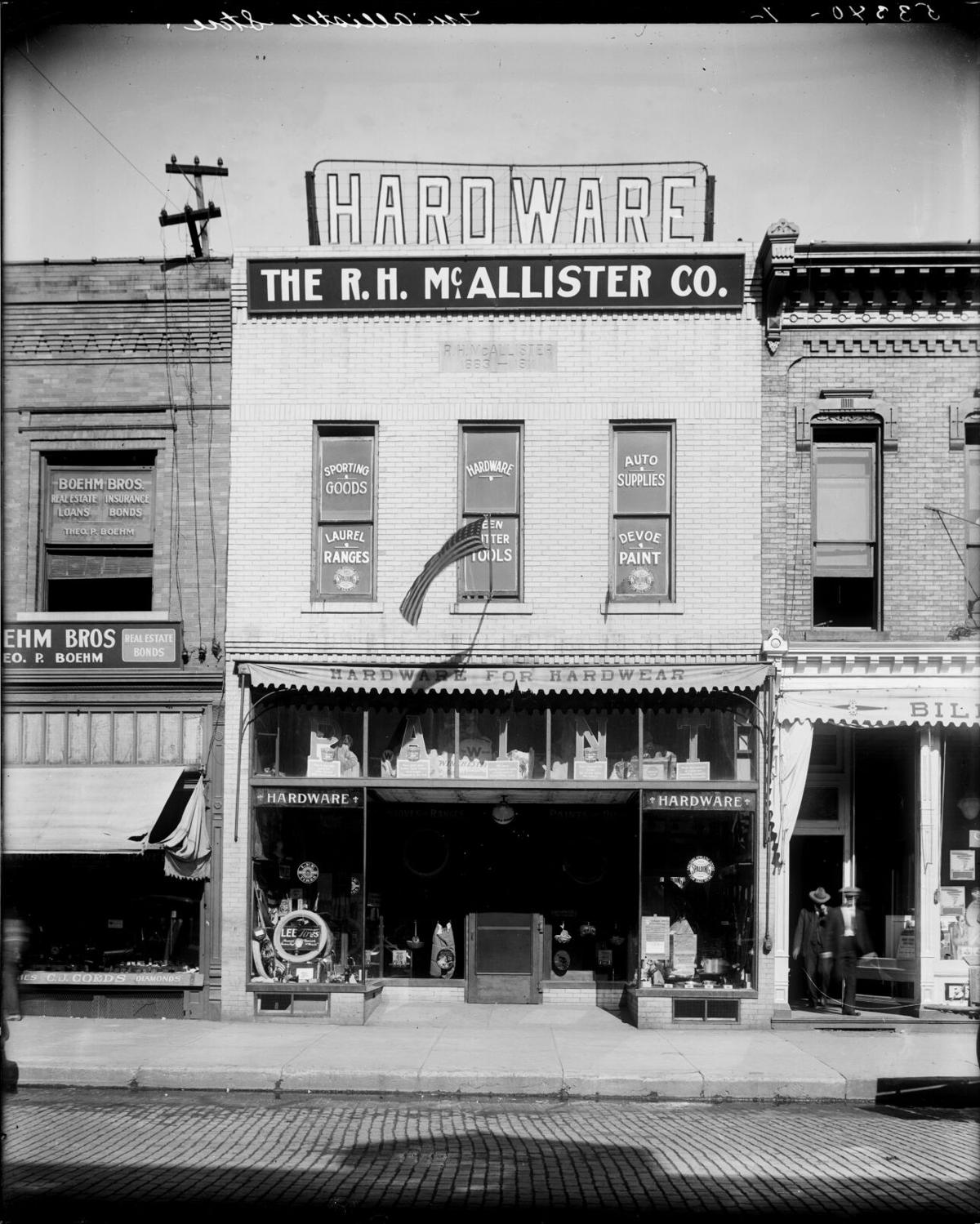 This photo shows one of the McAllister buildings at the time of the Nelson murder. McAllister owned the entire block.