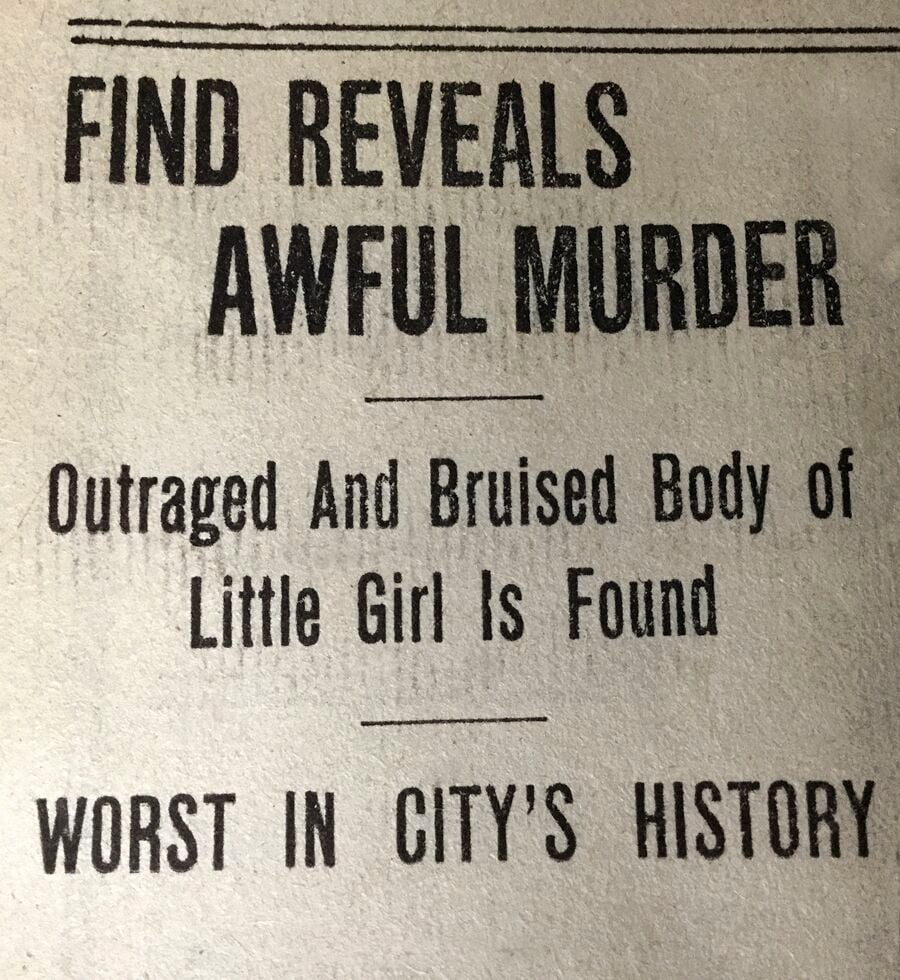 This article was previously published in the July 2018 edition of Murder Mysteries. Monday Mysteries will publish each Monday through October 2020.

On a brisk February afternoon, 10-year-old Goldie Williams was sliding down the icy streets of Grand Island with her friends after school.

Around 4 p.m. on Feb. 6, 1912, the laughing little girl was approached by a man who had been watching the little girls play. He asked young Goldie if she would like to have a pair of ice skates so that she could really skate on ice. The trusting little girl walked off with the man who promised her such a wonderful gift.

At 6 p.m., Fannie Williams was preparing the evening meal when she noticed that Goldie was still not home from school. It was not like her to be so late. She started to check with Goldie’s friends to see where her daughter was.

It was then that she learned how Goldie had gone off in search of ice skates. The girls described the man as older, with a mustache and bushy eyebrows. He was wearing a black coat and a gray cap. They were sure he must have been a friend of the family or a relative.

He certainly was not.

The Williams family — including Goldie’s parents, Fannie and Willie, and her older brothers — began searching for the missing girl. Several people remembered seeing the man and little girl walking together through the northern part of the city. A carpenter working on a house on North Washington recalled seeing the pair, as did some painters.

One of the painters, 16-year-old William Cunningham, would not forget the man’s face. Dr. Charles Flippin also recalled seeing the pair and remarked that the man was one who was “once seen, always seen.”

The family followed the tracks left by the little girl and man as they led to the east. On the corner of Elm and Ninth streets, the tracks were lost at a newly cleared off sidewalk. At 8 p.m. that evening, Willie Williams went to Grand Island Police Chief Marion Arbogast to ask for help.

The chief, a former railroad detective, enlisted Hall County Sheriff Gus Sievers to join him in the search. Throughout the night, the family and authorities searched the town. They looked in buildings, under bridges, in alleys and streets, and along the railroad tracks. There was no trace of the missing girl.

The next morning the fire whistle was blown to bring in more searchers. Men came from all over Grand Island and the surrounding towns. Telegrams were sent across the country and law enforcement across Nebraska were on the lookout for the missing girl and her abductor.

In the early afternoon, less than 24 hours after her disappearance, a worker entered a house on East 12th Street, near the Burlington Railroad tracks, to check on the fire he had left burning in the house. Upon entering the house, he noticed lumber in the front room was out of place. He searched through the rest of the house when he found lumber piled up in the bathroom, where there had been none before.

While he moved the lumber away, he noticed two bags of lime had been emptied upon the pile. As he brushed away the lime, his hand swept across the cold face of a child. He ran out the door immediately to find the nearest phone and call for help.

When the authorities arrived, they discovered the battered and beaten body of Goldie Williams. There was evidence of a struggle as her shoes had left marks on the wall. The murderer had taken the little girl’s own hat and had shoved it down her throat before raping her. She had been beaten with a piece of wood found nearby and strangled to death.

The searchers grew angry and promised swift justice at their hands when they discovered the man who committed such a horrendous act. News of the crime spread across the state and country. The governor of Nebraska provided an additional $200 to the reward started in Hall County. Citizens from Grand Island and surrounding communities continued adding money until more than $1,000 was raised for the villain’s arrest.

For the grieving Williams family, though, there was a funeral to be planned.

Grand Island Mayor Charles Ryan asked the people of Grand Island to provide assistance to the family as they prepared for their daughter’s funeral. Within hours, more than enough money was raised for all of the costs of the funeral and the ladies of Grand Island provided enough flowers to fill the church that would host the service. Six of Goldie’s school friends were listed as her pallbearers when she was laid to rest just three days after they had last played together.

Sheriff Gustav “Gus” Sievers and Deputy Sheriff William Cords traveled across the state in the days, weeks, months and years after the crime was committed, investigating every lead. Men were detained in Hastings, Central City, Broken Bow, Lincoln, North Platte and all points in between if they resembled the description of the killer.

Sievers traveled to South Dakota to interrogate a suspect. One likely suspect was questioned while he was being held in a prison in California. The body of a man hit by a train near Albion was inspected. Every lead was followed, investigated and dismissed. The killer had simply vanished.

In June 1937, 25 years after the death of Goldie Williams, William Cunningham was visiting Colorado Springs with his wife when he spotted a face he had never forgotten. Cunningham quickly followed the man who shuffled down the street to the point the man stopped and talked with another before continuing on his way.

After the man with the stooped shoulders continued on his way, Cunningham rushed up to the other man he had been conversing with and inquired as to the name of the man he was speaking with. The man replied his name was Cox and he a janitor who lived in a boarding house in Colorado Springs. Cunningham apologized and said he thought it had been someone he knew from his hometown, then hurried away.

When he returned to his waiting wife, he informed her they were heading to the nearest police station. Cunningham was positive he had just spotted the man he had seen as a 16-year-old boy — and the man was leading away Goldie Williams before her death in 1912.

At the Colorado Springs police station, Cunningham was ushered into the office of Inspector I.B. Bruce. where he told the tale of the disappearance, assault and murder of the little girl in his hometown 25 years prior. Inspector Bruce had doubts as to how, so many years later, Cunningham was convinced this man was the killer. Cunningham told the inspector that the town had been so gripped with the horror of what had happened and he, with young sisters the same age as Goldie when she disappeared, was so shaken that he could never forget the face of the man he spotted walking away with the little girl all those years ago.

Inspector Bruce went to the boarding house where Charles Wesley Cox resided and began to question residents about the man. It was there he discovered Cox had been engaging in illegal acts with young girls, daughters of one of the tenants in the boarding house. Cox was brought into the station for further questioning and held on charges related to the 7- and 9-year-old girls who resided in the boarding house.

At the station he met Cunningham face to face. Cox admitted to having been in Grand Island at some point and did recall seeing him there, but could not recall his name. Bruce contacted Grand Island Police Chief Harry Moore to provide details on the crime committed against Goldie Williams in 1912.

Under questioning, Cox finally broke down and confessed to the crimes against the girls in the Colorado Springs boarding house. He then admitted he was the man authorities in Grand Island had sought. Every detail he provided to Inspector Bruce matched exactly to the report provided to him by Chief Moore, with the exception of one detail: Grand Island officials believed a walking cane witnesses had seen the perpetrator use was the weapon that was used to strike the girl, Cox stated he used a small club or hammer that day.

Cox told Colorado authorities that his real name was Charles Wesley Cox, although while he was in Grand Island he used the name Elias Horn. He stated that he began using the name Horn after leaving Wyoming, where he had been married to a woman with young children who accused him of making inappropriate advances toward her daughter. After he left Grand Island the night of Goldie’s murder, he began using the name C.T. Finnerty. When he arrived in Colorado Springs a few years prior to his discovery, he had changed his name back to Cox, believing the past would be forgotten with the different aliases he had used.

Colorado authorities were convinced that Cox had committed other crimes in the 25 years he roamed the country. However. after confessing to the crimes in Colorado Springs in 1937 and Grand Island in 1912. he refused to divulge any more about his activities in the years between.

Cox was charged in Colorado with rape and sentenced to a term of 50 years to life in the Colorado State Penitentiary. Hall County Attorney Lloyd Kelly charged Cox with first-degree murder. In the event that 61-year-old Cox was paroled in Colorado, he would be extradited to Nebraska to stand trial and face the possibility of the death sentence.

Less than two years into his sentence, Charles Wesley Cox died in the Colorado State Penitentiary without ever standing trial in Hall County for taking the life of 10-year-old Goldie Williams. 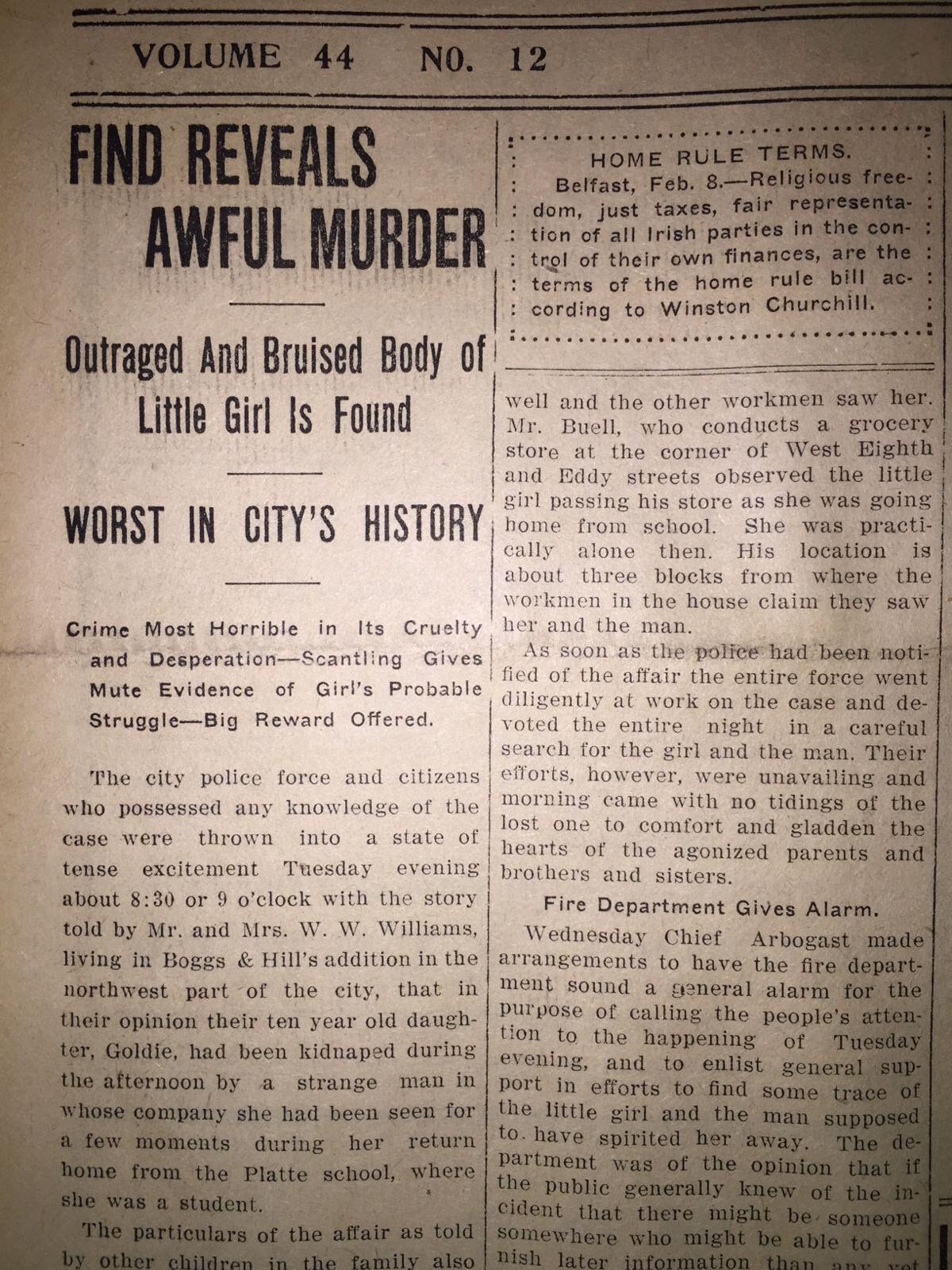 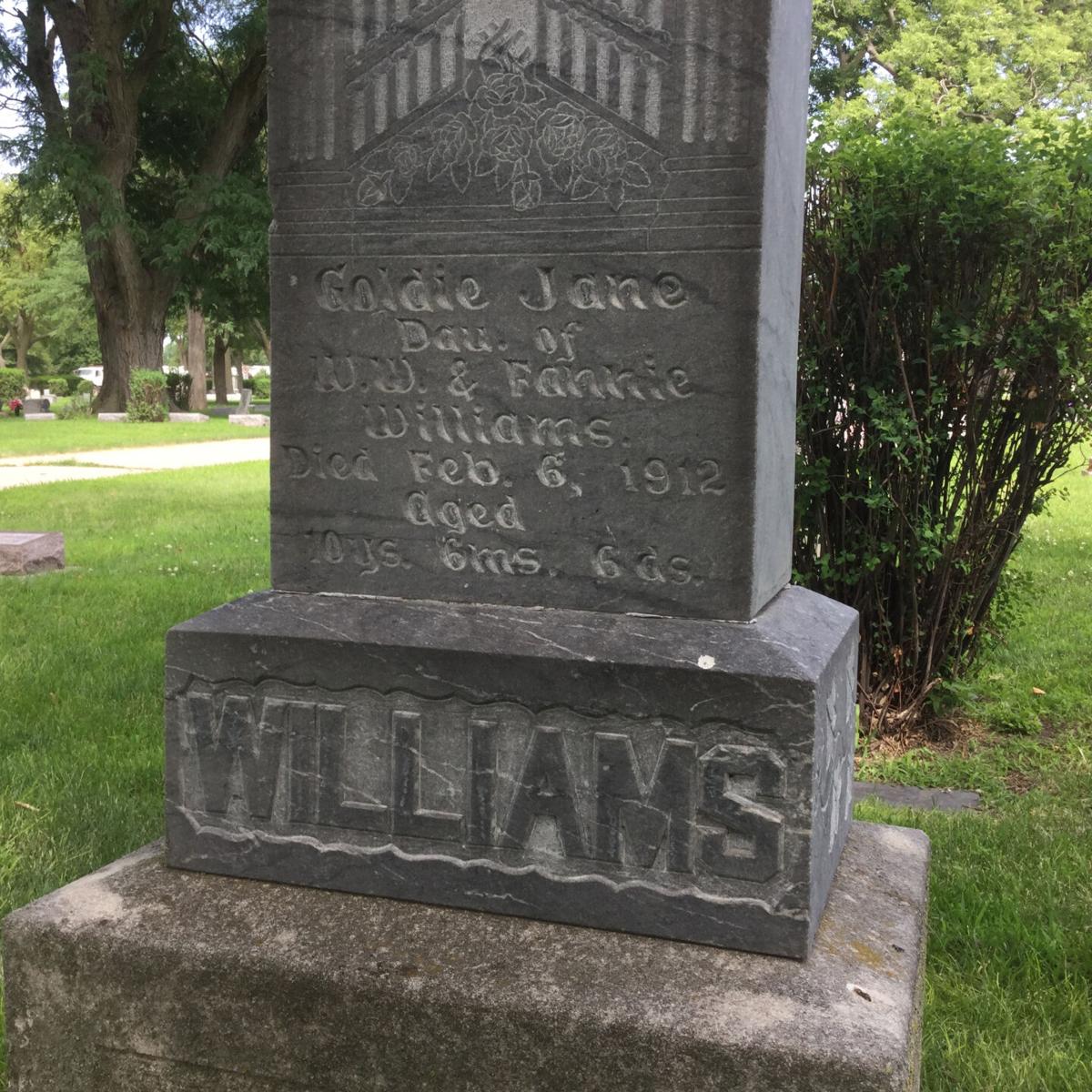 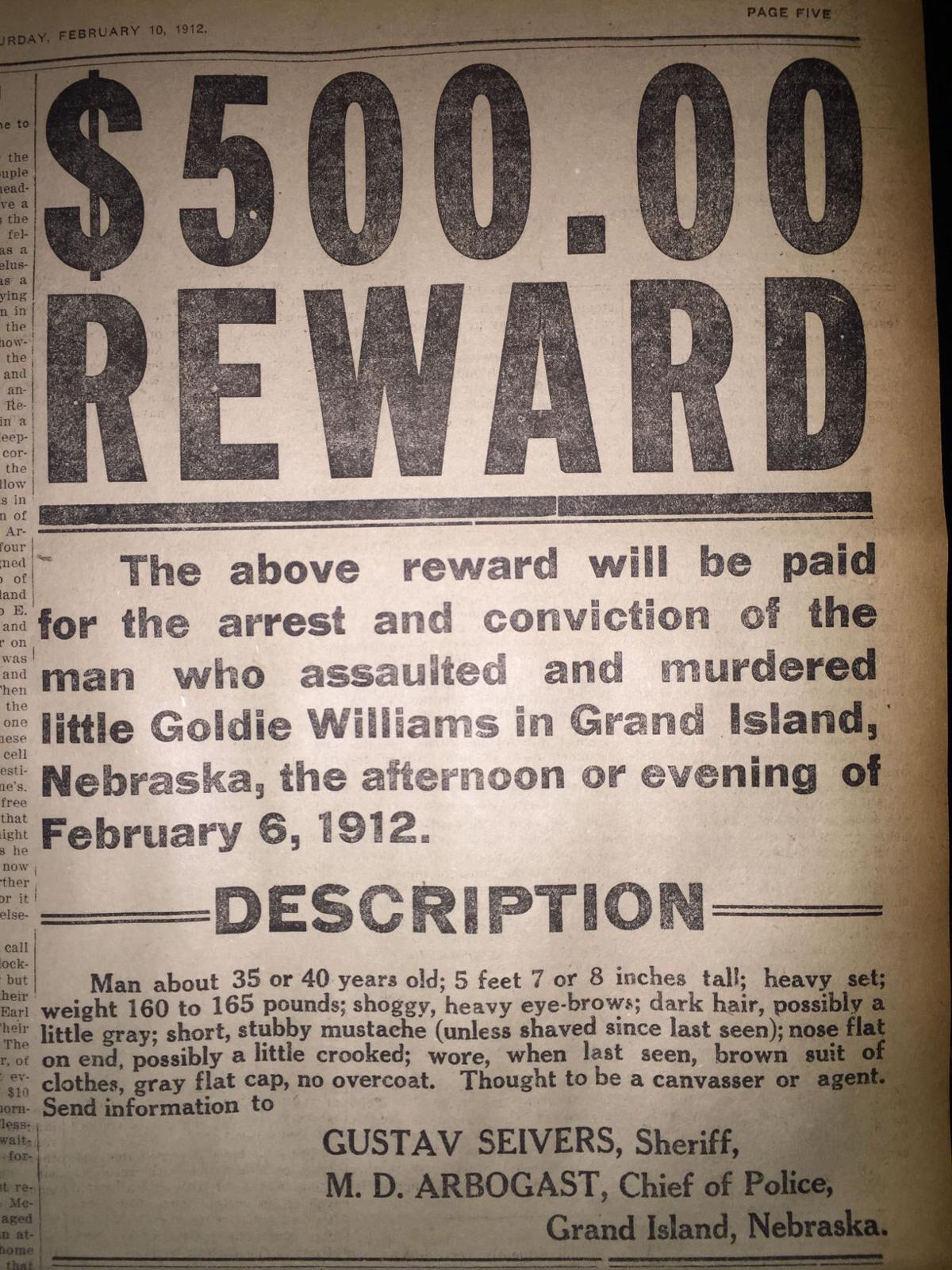