The curtain drew back ever so slightly, while a sliver of the early morning sun passed across one side of 10-year-old Daisy Harlson’s face. She stirred at the intrusion and whimpered “momma, momma” before turning over. She threw her hands over her head as her flaxen curls spread out across her pillow and drifted back to her dreams.

Daisy slept in the big bed between her mother, Mary Harlson, and her little sister. Mabel, age 4, slept against the wall and had turned in the bed during the night so her head was now at the foot of the bed.

Across the foot of the bed sat the crib where 2-year-old Jasper, called Jessie by his sisters, slept.

In the shadows next to the bed stood a figure staring down at Mary and her three children. In his right hand he held an axe.

At Daisy’s stirring, the killer almost lost his nerve to go on, but he had come too far. Outside the door of the sod house, a grave had already been dug and was now waiting for the family to be placed inside.

As the dawn began to break on Nov. 3, 1878, the shadowy figure brought the axe down on the left side of Mary Harlson’s head, killing her instantly. To make sure there was no doubt, the killer brought the axe down again onto her left temple. The deadly blade was then turned toward the still-sleeping Daisy, with the flat side of the axe striking her twice on the left side of her head.

Mary Harlson was carried out to the fresh grave first. The killer carried both girls out at the same time, and then tossed the little boy on top of the family.

A blanket was tossed over the bodies, followed by scattered straw and dirt.

Within an hour, the deed was done. The killer went back inside to clean up the scene and himself before riding away from the farm.

Three days later, Stephen Richards drove a wagonload of corn into the Harlson yard. He had made arrangements to buy the Kearney County farm from Mary Harlson, whose husband had escaped from the jail in Kearney earlier that year, never to be seen again.

After paying her the first half of the money, Richards planned to take over the farm the end of October. When asked where the Harlson family had gone, he replied he supposed they had taken off with a man named Brown who had been staying at the farm and who was now gone.

On Dec. 9, 1878, Peter Anderson, a Swedish farmer, was preparing dinner for himself and a man who had been helping on his farm.

Anderson had been sick and accused the man of trying to poison him. The man denied the accusation. When Anderson called him a liar, the man became angry and told him if he said that again he would get hit. Anderson again called the man a liar and he was knocked to the ground.

Anderson reached for an axe when the man brought a hammer down over his left eye. The hammer was brought down twice more before the man pushed the body off to the side. He then sat down and proceeded to eat his dinner.

A wagon approached in the distance, and the man quickly locked the door and got down. The visitor knocked at the door, calling for Anderson. When he received no reply, the visitor got on his wagon and drove away.

A short time later, more men came to Anderson’s house. By that time, Peter Anderson had been dragged down into the cellar. As the man murmured in a language the killer could not understand, he struck him again before covering the body with coal.

The man was saddling his horse when the neighbors arrived looking for Anderson.

He told them the farmer had gone to see someone about some corn and would not be back for some time. When the neighbors went into the house, the man knew the body would soon be discovered, and he quickly rode away.

The man returned to his home and quickly packed. He arranged for his trunk to be taken to Kearney, then shipped on to Omaha, before heading south himself to Red Cloud and then to Hastings. He traveled under an assumed name until finally reaching his childhood home in Mt. Pleasant, Ohio.

Stephen Richards was traveling with two young ladies on the way to a holiday party when he was surrounded by authorities and arrested. When one of his friends asked why he was being arrested, 23-year-old Richards joked “for killing of two or three whole families I guess.”

The only murder Richards was charged with was the murder of Peter Anderson. However, he claimed that one was truly self-defense. Before being returned to Nebraska to stand trial for Anderson’s murder, Richards confessed to nine murders over three years in Nebraska and Iowa.

Richards had ventured west in search of fortune in January 1876. He spent time in Iowa and worked as an attendant at the Insane Asylum until the fall of 1876 when he headed towards Nebraska — first to Hastings, and then to Kearney.

Two weeks after arriving in Kearney, he had been traveling on horseback when he met a stranger. The men camped for the night and played cards for money. The man accused Richards of cheating. They agreed to let the matter lie and go to sleep.

The next day, the stranger demanded he be given his money back. Richards refused and shot the man above the left eye. He dragged the body to the river and pitched him in. He took the man’s horse and traded it for another at Kearney.

Two or three days later, Richards was approached by another man asking where the man he had been with a few days ago had gone. He denied any knowledge of the man, named John, but as the stranger continued to ask questions, he became nervous and shot him in the back of the head.

After disposing of the body and the second horse, he traveled on to Jasper Harlson’s place in Kearney County. When he arrived, Mary Harlson asked if he had been fighting, as he had blood on his shirt and collar. Her question startled him, and he joked that it must belong to some of the men he had murdered. She dropped the subject.

Richards continued his travels going west toward Cheyenne, south through Kansas, into Kansas City, then up through Iowa again. Along the way, he used various aliases and freely spent counterfeit money. In December 1877, he passed through Cedar Rapids, Iowa, where he bought a buggy and some horses using counterfeit money. Three days after the transaction was done, the seller caught up to him and demanded the property be returned or he pay “good money.”

Richards shot the young man and buried his body before heading back to Nebraska. 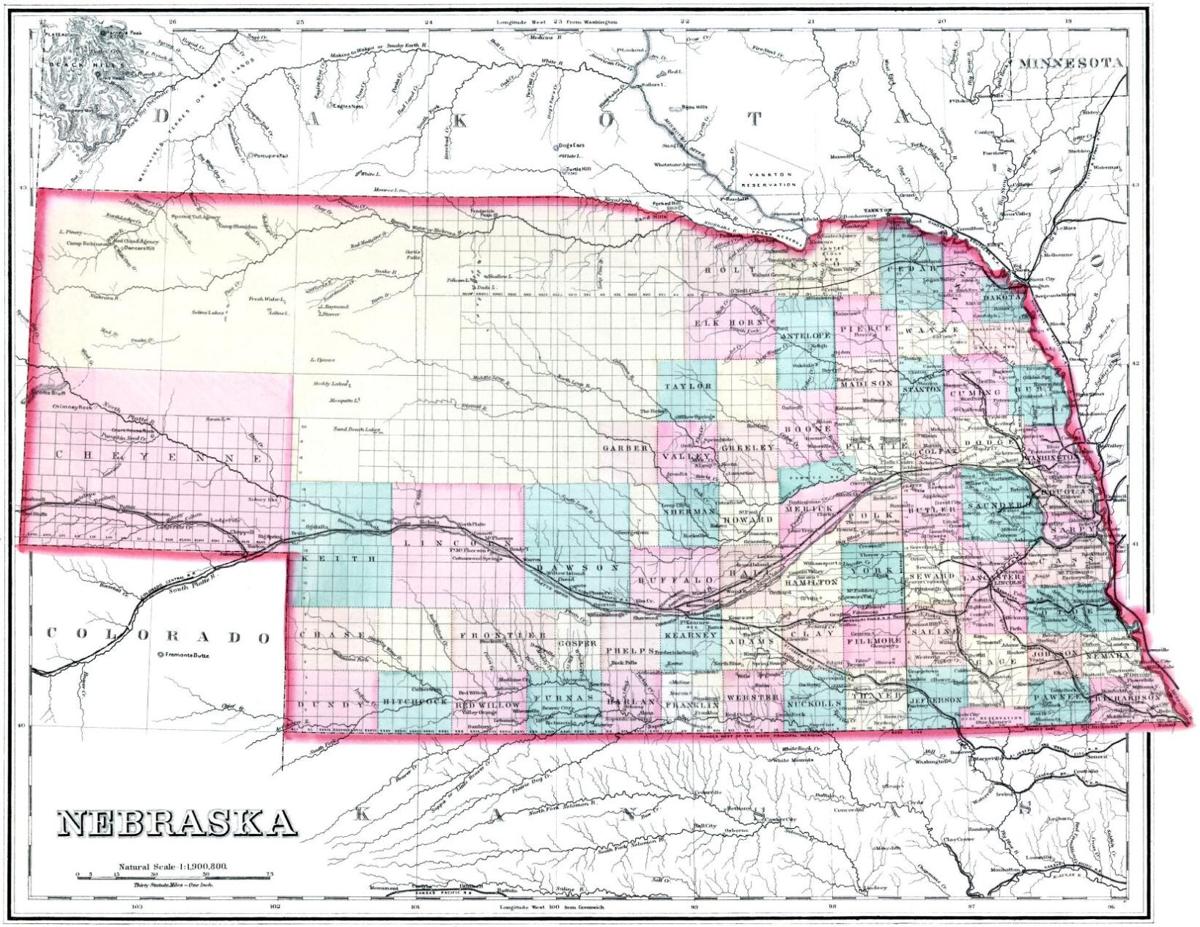 After a brief stay in Lincoln in January 1877, Richards headed back to Kearney County to Jasper Harlson’s farm. Harlson was being held in the jail in Kearney for stealing lumber off of the Platte River bridge.

Friends of Harlson, including Stephen Richards, snuck tools into the jail to aid in his jailbreak.

On March 19, 1877, Richards was leaving Grand Island in the company of a man named Gemge. On their way to Kearney, night overtook them, and they made camp between Lowell and Kearney near the Burlington & Missouri bridge across the Platte.

At 3 a.m., Richards awoke his companion and suggested they get ready to head out. Gemge cursed at him for waking him up and said it was not much past midnight. Richards replied it was after 3, to which Gemge called him a liar. The men quarreled briefly before Richards pulled his gun and shot Gemge dead.

Richards continued to Kearney, where he was arrested for the first time as a murder suspect.

He was, however, innocent of the crime he was charged with and released.

In 1878, he was arrested again and held in the Kearney jail on a charge of larceny. While incarcerated, he met Mary Harlson, who had been charged with assisting in her husband’s escape from jail. Richards and Mary Harlson discussed her transferring the deed to her farm in October 1878 when she would “prove up” on the claim.

After his release from the Kearney jail in June 1878, Richards spent time in Grand Island and Hastings before arriving at the Harlson farm in October. He later recalled the time spent playing with the Harlson children, who he claimed, “hung around me constantly and seemed to be very fond of me.”

After his capture, Richards was asked why he killed the Harlson family. He replied Mary Harlson was “too shrewd” and asked too many questions. She had also gone through his things and he was afraid she would turn him in. When asked if he had any qualms about killing the children, he replied he didn’t feel bad about it at all and he had the “same sort of feeling when I killed these little Harlson kids” as he had when he killed a litter of kittens as a boy.

Stephen Richards stood trial on Jan. 15, 1879, in Minden. The trial began at 9 a.m., and by 4 p.m. he was convicted. Richards was sent to Lincoln to be held until his sentence could be carried out.

On April 26, 1879, Richards was returned to Minden, where he walked up the scaffold surrounded by two thousand onlookers.

He smiled and said to the assembled he only murdered two people, not counting the Harlson family, and while he was willing to bear part of the blame, he was not entirely to blame for the crimes he was accused of.

The hood was placed over his head.

With the pull of a lever, Nebraska’s first serial killer was executed.

‘There is always something fun happening’: Despite pandemic, Grand Island woman makes her business work

Every holiday season there is the search for that unique gift for a family member or friend. Sometimes the best gift is from heart to hand — a… 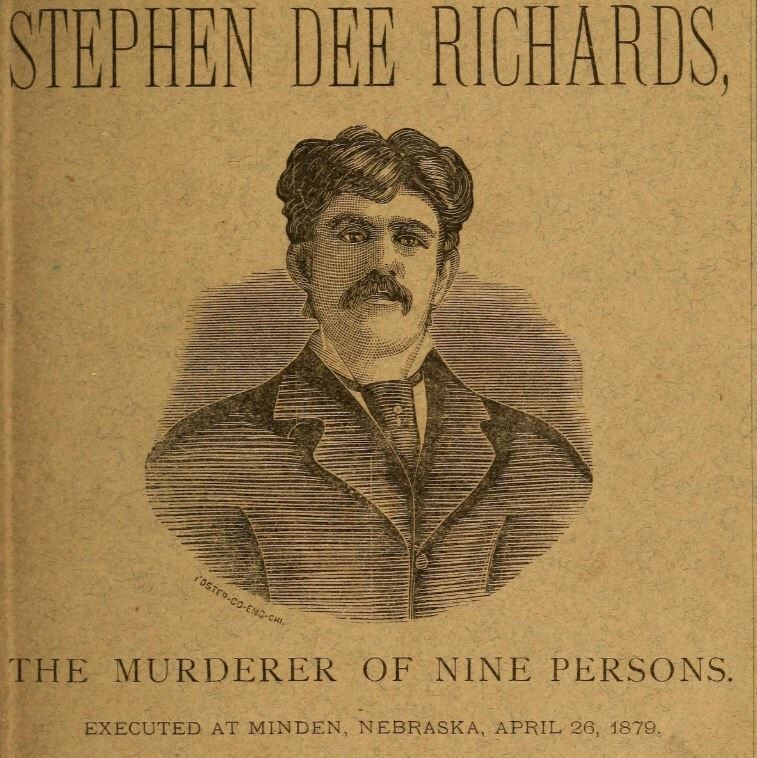 This image of Stephen RIchards is taken from "Life and Confession of Stephen Dee Richards," a book published in 1879 and accessed on Archive.org. Richards was convicted Jan. 15, 1879, and is believed to be Nebraska's first serial killer.