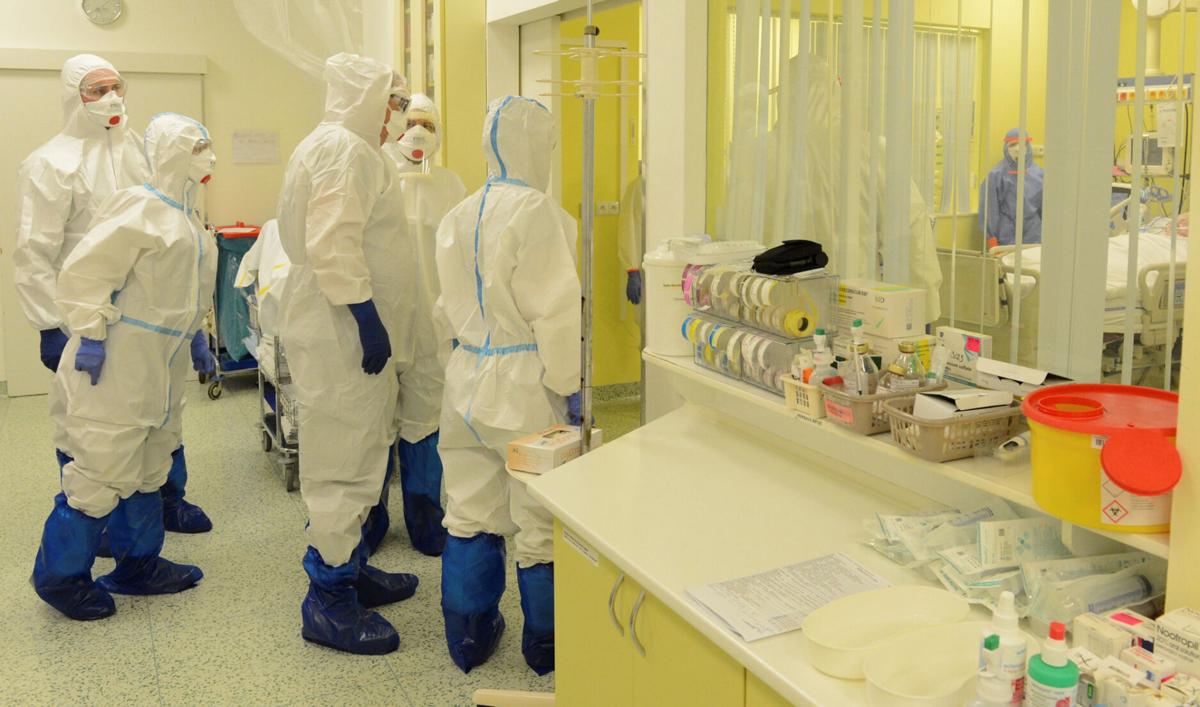 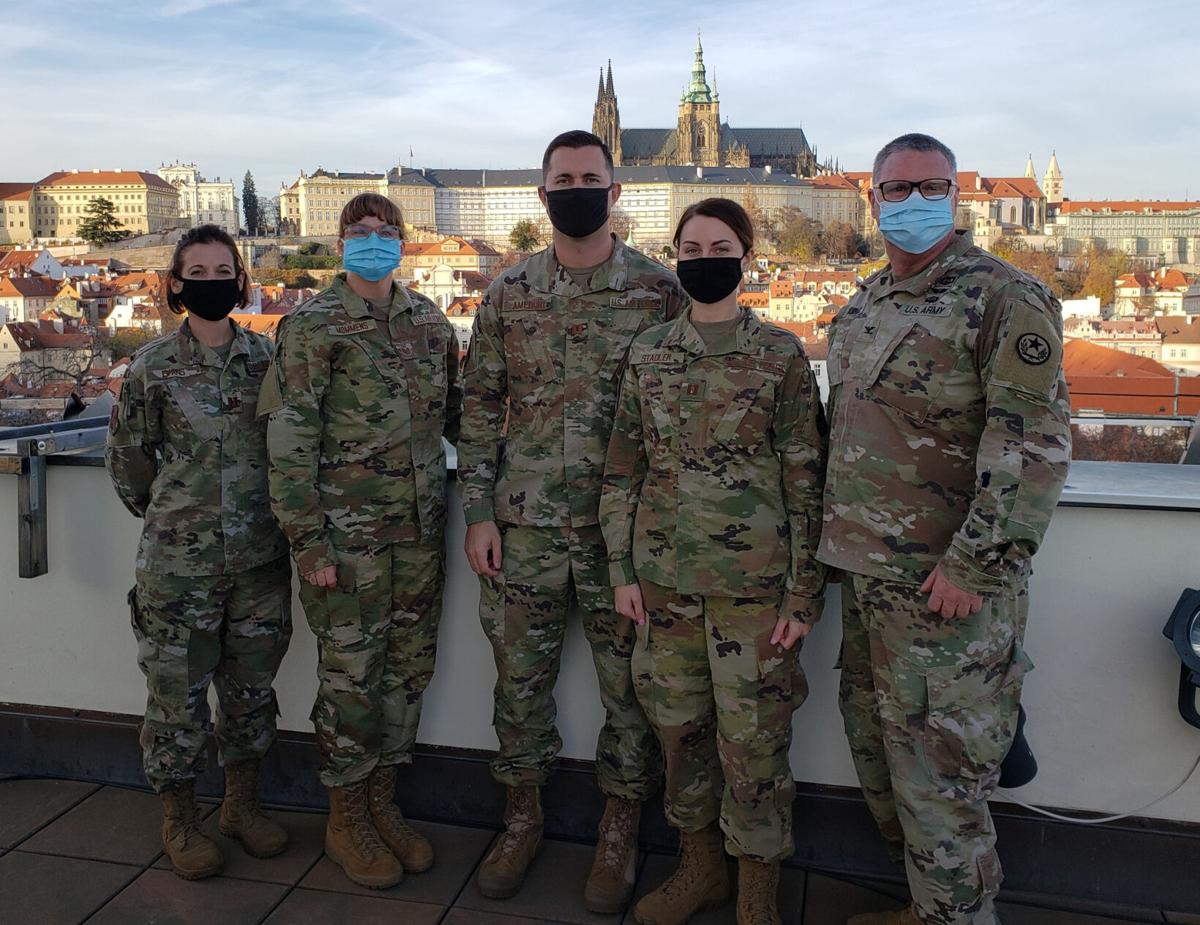 LINCOLN — Members of the Nebraska and Texas National Guard traveled to the Czech Republic in November to serve in an assessment and advisory role to help combat COVID-19, at the request of the Czech Ministry of Health.

The team of guardsmen, comprised of physicians, medical administrators, planners and logisticians, assisted with the implementation of best practices and setting up field hospitals as the Czech Republic anticipated a resurgence of COVID-19. Legally, these providers could not engage in direct patient care while in the Czech Republic.

The trip was a direct result of the strong partnership shared under the U.S. Department of Defense State Partnership Program, which links a state guard unit or units with other nations, for military support and other broader aspects of support.

According to Lt. Col. Shane Varejcka, the Nebraska National Guard State Partnership Program coordinator, this was the first time in the 27-year history of the state partnership among the Czech Republic and the Nebraska and Texas National Guard that a real-world, collaborative mission effort was requested, making this a unique opportunity for everyone involved.

“Our typical engagements are executed by two to three personnel for seven to 10 days and are focused on ways to integrate best practices at the tactical level and to help facilitate interoperability between the two organizations,” Varejcka said in a news release. “Those engagements are typically aligned with the EUCOM (U.S. European Command) lines of effort and unfortunately medical is not one of those, so this opportunity was extremely unique.”

Understanding this exchange to be a first of its kind, Lt. Col. Amy Johnson, Nebraska Air National Guard 155th Medical Group nurse and medical administrative officer from the team, said it made the mission a “pretty big” deal.

“The medical part of our partnership had never been a line of effort requested by the Czech Republic, and this mission shows unity with the teamwork of both partnerships from Nebraska and Texas,” Johnson said in the release.

Johnson arrived in the Czech Republic Oct. 31 and served as a forward medical technical liaison along with medical professionals from the Texas National Guard, sharing best practices and lessons learned in the United States with Czech Republic Ministry of Health representatives.

Johnson felt honored to be a part of the team, and said she believes the exchange was important for the future, maintaining the relationships with the Czech Republic medical leadership that have now been established.

“We can keep sharing information from country to country should another pandemic happen or should they need support for other medical reasons,” Johnson said. “It’s important that we keep those relationships there for future partnerships and opportunities.”

Coldwell spoke of the opportunity to evaluate their alternative care site and two of their military hospitals.

“As a group, we were very impressed with what we saw,” said Coldwell. “With their abilities, with the protocols they’ve generated for their treatment, with the success they are having in their treatment, and the transitions they’ve had over the past few months. All of the difficulties that we experienced in the United States, they’ve experienced here as well.”

Coldwell said he hopes this type of collaborative effort continues.

“This is something that needs to endure,” Coldwell said, adding his desire for the collaboration to occur at least annually, if not more often. Coldwell said he believes there would be a benefit in inviting Czech providers to spend time in both Nebraska and Texas, and having the opportunity to interact and train alongside American providers.

Other team members echoed Coldwell’s comments, praising the experience as a positive way to grow, learn and deepen the State Partnership Program relationship.

Texas National Guard Air Force Capt. Craig Ameduri, 149th Fighter Wing Medical Group physician assistant, said he was selected for the trip because of his experience with COVID testing and treatments, and to help demonstrate to Czech Republic physicians what an asset mid-level providers, such as physicians assistants and nurse practitioners, can be.

“I see COVID patients every day in my ER,” said Ameduri, who works in the emergency room at Lackland Air Force Base. His experiences allowed him to share some expertise of how an advanced practice provider can assist doctors in need.

Since nurse practitioners are a newer concept in the Czech Republic, Texas National Guard Air Force Capt. Natalya Stadler of the 136th Airlift Wing Medical Group volunteered to show how the skillset can be valuable to leverage during the pandemic.

“I’m a nurse practitioner and primary care is what I’m doing currently, focusing on internal medicine and primary care,” said Stadler, who is also no stranger to international experiences. “I think my background in international studies helps to understand the culture better and any kind of cultural or knowledge exchange helps to understand each other a little bit better.”

Air Force Capt. Stephanie Evans, a nurse with the Nebraska National Guard’s 155th Medical Group, said she was chosen for the mission due to her extensive COVID-19 patient experience as a critical care nurse, working with Nebraska Medicine’s biocontainment unit in Omaha since January. She said she was humbled to go to Olomouc and see the five patients in the intensive care unit there.

“It’s been comforting knowing they (Czech Republic) are doing most of what we are doing, even across the ocean how things are so similar,” Evans said. “We are all fighting COVID together.”

Evans said she likes sharing these new connections, and having a growing network she now can draw from, both from a health care standpoint and from a military standpoint.

‘Excited about the possibilities’; Oncologist says COVID vaccines may help with cancer treatment

Dr. M. Sitki Copur, a medical oncologist, says the vaccines being used for COVID-19 may have benefits in the fight against cancer. The development of the vaccines is a “very exciting development not only for coronavirus infection but it has a lot of implications in the treatment of cancer,” said Copur, who works for Mary Lanning Healthcare’s Morrison Cancer Center in Hastings

The Nebraska State Fair will continue to host Nebraska 4-H and FFA livestock shows on separate weekends this year.

As a winter storm moves across the states, many local businesses and stores close for a second day in a row.

Both Grand Island and Hastings received a record snowfall Monday, according to the National Weather Service in Hastings.

Due to a snowstorm moving through the area, several area schools and businesses have closed for the day.