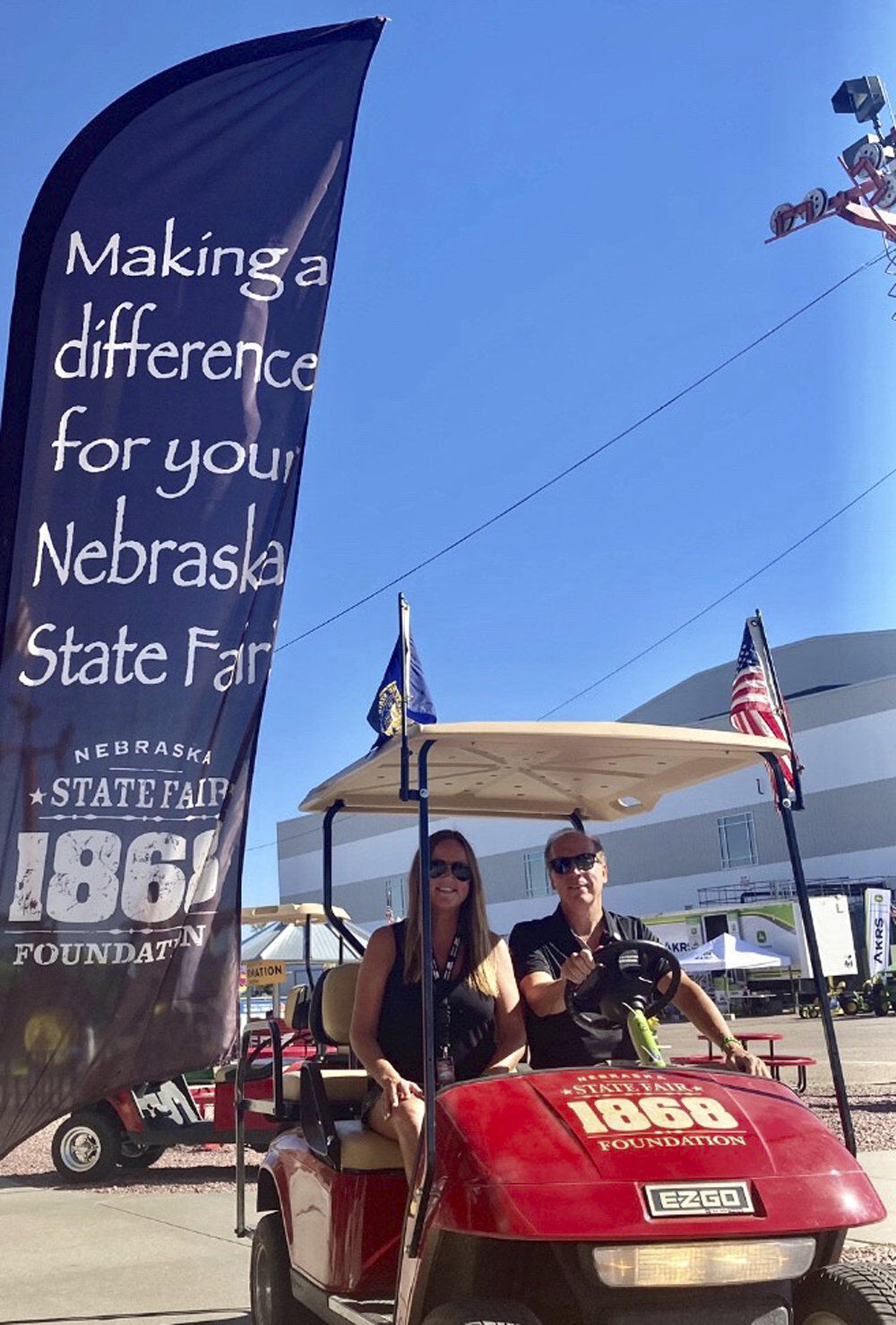 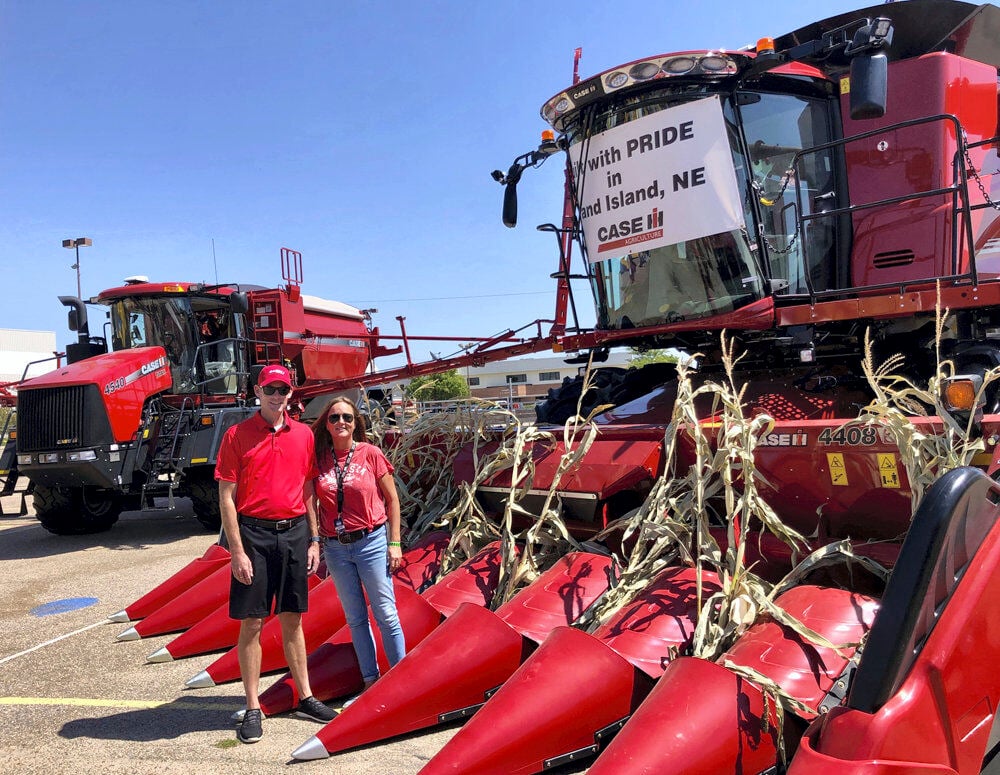 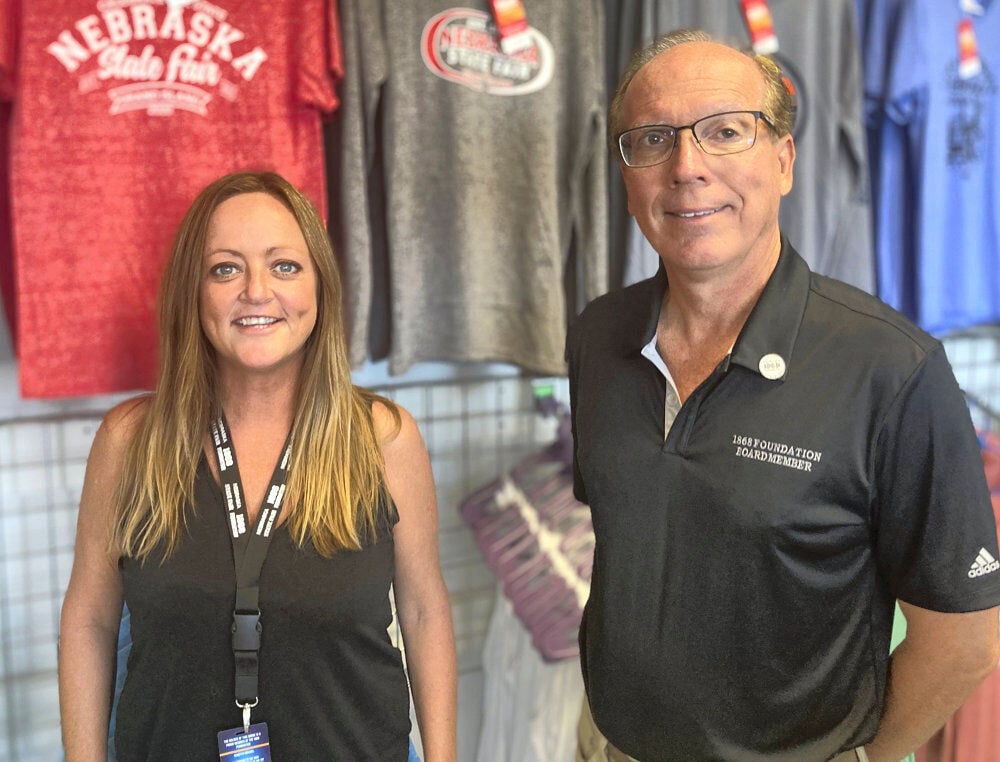 When it comes to making a difference, the Nebraska State Fair 1868 Foundation has been a driving force in helping the State Fair grow since it arrived in Grand Island in 2010.

According to Lindsey Koepke, 1868 Foundation executive director, the purpose of the foundation is to raise funds for the overall improvement of the Nebraska State Fair.

Despite lower attendance at this year’s COVID-19-impacted State Fair, businesses and individuals have reached out to donate to the foundation.

“This is so amazing to me since CNH Industrial and Case IH give so much already to our State Fair,” Koepke said. “I mean, they provide tractors for our people movers, they provided combine rides with so many of their employees involved and now a $20,000 financial gift to the 1868 Foundation — it’s a little surreal.”

CNH Industrial plant manager Mike Schaefer said the company has been all in with the Nebraska State Fair since it moved to Grand Island in 2010.

“Because of our 55-year history in Grand Island and the fair’s 150 years in the state it seemed like a perfect union to help celebrate agriculture in a big way,” Schaefer said.

Koepke said that CNH Industrial’s involvement has been shepherded by Andy Marsh of Grand Island, a local real estate developer.

Koepke said the Nebraska State Fair has just begun to “blossom” as it enters its second decade in Grand Island.

“As the fundraising arm to the fair, the 1868 Foundation and its board of directors are thrilled to receive the CNH Industrial financial gift,” she said. “We are truly blessed with so many partners, not the least of which is the entire team at Grand Island’s Case IH plant.”

Terry Galloway, a longtime Grand Island resident who recently retired, said not only is the State Fair a prime time for raising funds, but it helps with the foundation’s year-round fundraising effort, especially with the many contacts members make during the fair. The foundation operates a gift shop that raises thousands of dollars in its efforts to make longterm improvements for the State Fair. Galloway is the chairman of the foundation’s board of directors.

Koepke said not only does the foundation raise funds for capital improvements to the fair, but has helped create a “culture of charitable giving directed towards the State Fair to make sure these facilities continue to grow and be enhanced and the State Fair continues to be the shining star.”

She said the foundation works closely with the Nebraska State Fair board of directors and the fair’s new executive director, Bill Ogg.

“It is super important to have a great relationship with the two because communication is key,” Koepke said. “They have a mission and our mission is to support their mission and to find people who want to get on board with us and help make those things possible.”

Since the State Fair came to Grand Island in 2010, one of the foundation’s big projects was to raise $750,000 to construct the Thompson Foods Outdoor Arena.

“That is probably our shining point, but we have contributed 27 cents per guest at the Nebraska State Fair since coming to Grand Island for improvements to fair, whether it be park benches, air conditioning the Fonner Park Concourse or other major construction,” Koepke said. “That is important to us and a legacy we are proud of and we are proud to give back.”

She said the State Fair has needs for expansion and growth and so does Fonner Park.

“Our mission is to support the State Fair, which does benefit Fonner Park,” she said. “That comes back in the way of the community in that they can bring more events.”

Koepke said that helps Grand Island, which benefits from the sales taxes on food and lodging from visitors who come to Grand Island for the fair or other events held at Fonner Park.

“It helps bring revenue back to the community that welcomed us 11 years ago,” she said.

Another way the foundation will aid the State Fair and Fonner Park are the planned improvements to the grass parking lots used during the State Fair.

Before the fair’s move to Grand Island, parking at Fonner Park was paved within the confines of the venue. But the fair, to accommodate the carnival and other attractions, used those paved lots. People coming to the fair then parked in areas that once hosted sport fields. Most years that arrangement worked, but almost 12 inches of rain in August 2019 made parking impossible in those grass fields.

Out of that parking dilemma, Koepke said the foundation started the “Rock the Lot” project to gravel the roads used to park in Fonner Park’s grassy fields.

“Parking was an issue last year,” she said. “The fair definitely has a need for people to comfortably come to the fairgrounds, park their vehicle and come in and have a great day at the State Fair. Our board accepted a request for $92,000 to, once the lot is rocked, to come in and identify what needs to be fix and make it perfect for next year.”

Galloway said the foundation’s purpose is to bring people to together with the goal of the betterment of the Nebraska State Fair.

For example, a longtime vendor at the State Fair, Tammy Earnest, along with her husband, Mitch, operate Triple E Signs & More of Palmer and made a contribution to the foundation during the fair.

Earnest said the foundation is important to the operation of the State Fair.

“The fair needs the 1868 Foundation,” she said. “We are contributing to the foundation because it is our choice.”

That “choice” is because the Earnests see the value not only of the foundation, but the value the fair brings to Grand Island and the entire state.

This is the first year they have donated to the foundation.

What prompted that donation, Earnest said, is that “many people walked up to us and thanked us for being at the fair this year. That is how important the State Fair is to the state of Nebraska.”

Because of the COVID-19 pandemic, Koepke said the foundation has cut back on its solicitation efforts because of the financial difficulties created for businesses and individuals.

“It would not have been the State Fair’s way of doing things,” she said. “We know from our donors and our supporters and volunteers, everybody feels they have a vested interest in the fair, which comes from the heart. People are looking at their budgets and what they can do charitably for the year. Even if it is a $10 contribution they chose for their charitable giving for the year, that is a true heartfelt message in how much people support their State Fair.”