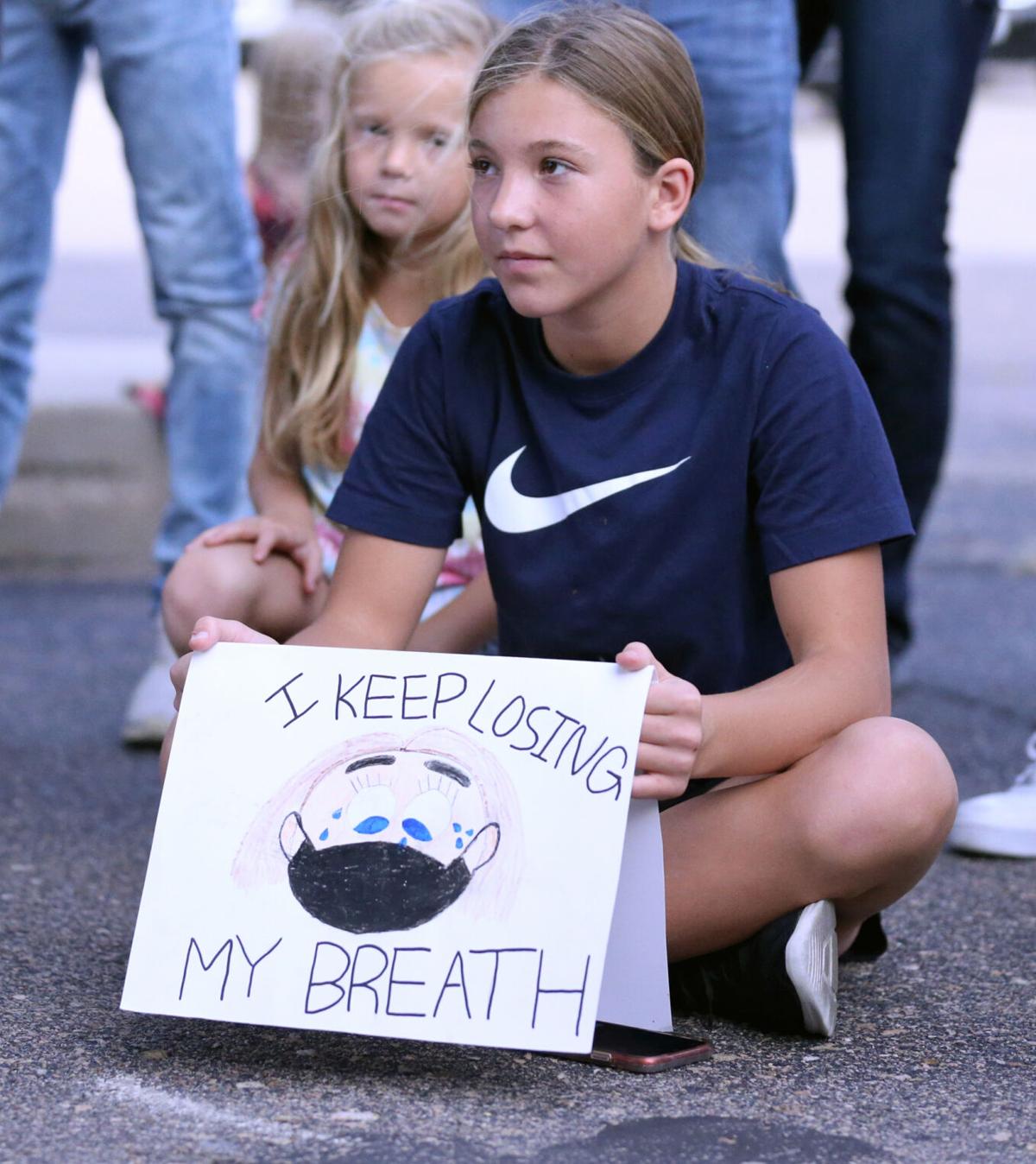 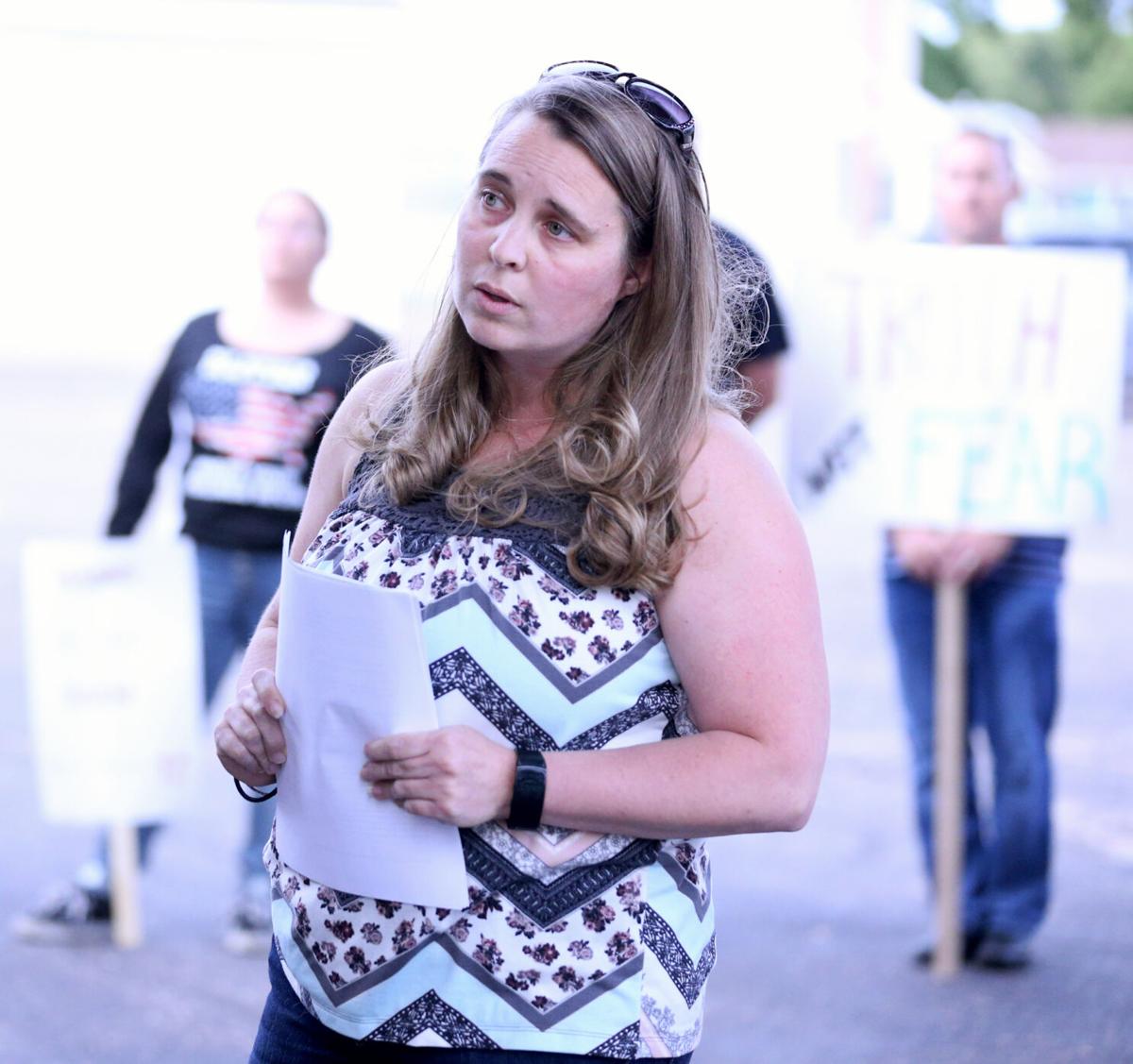 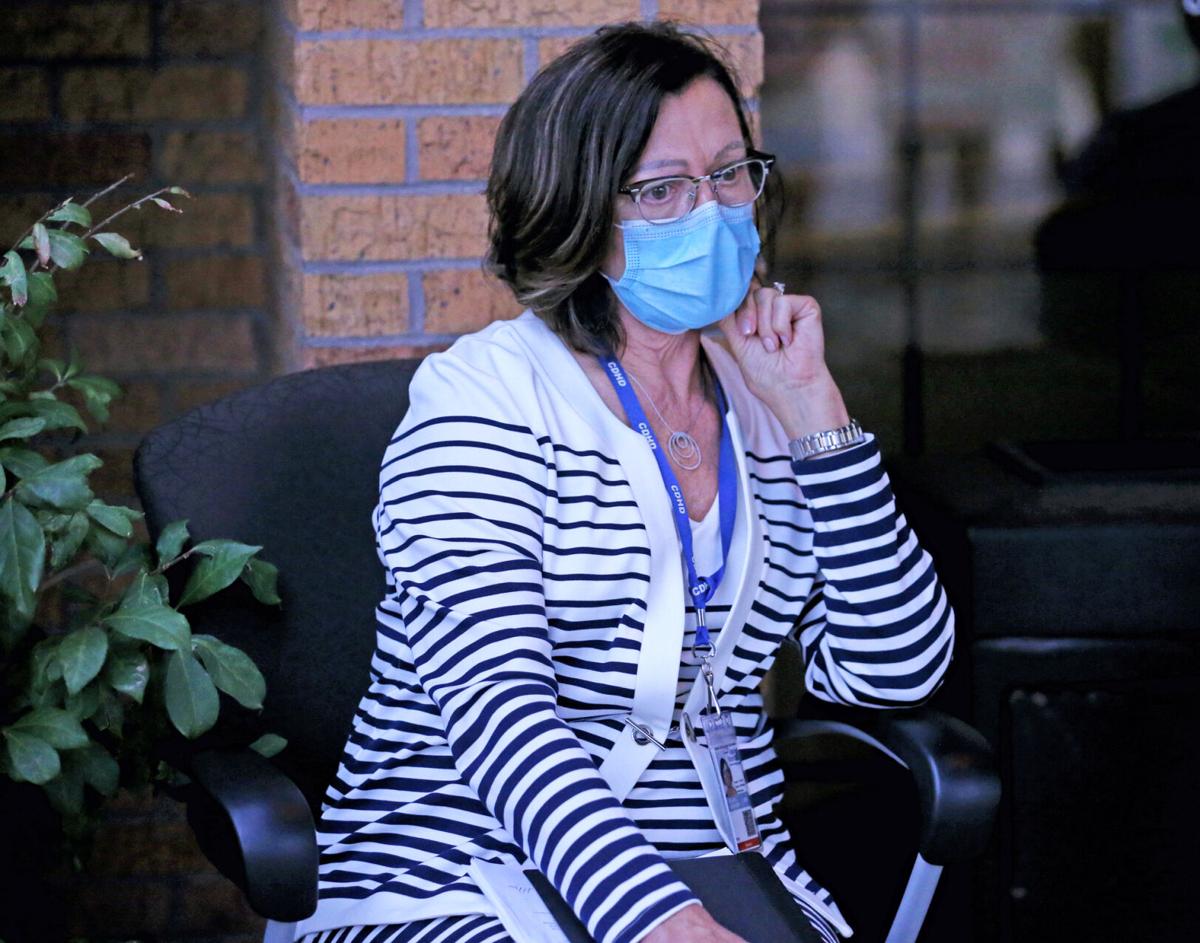 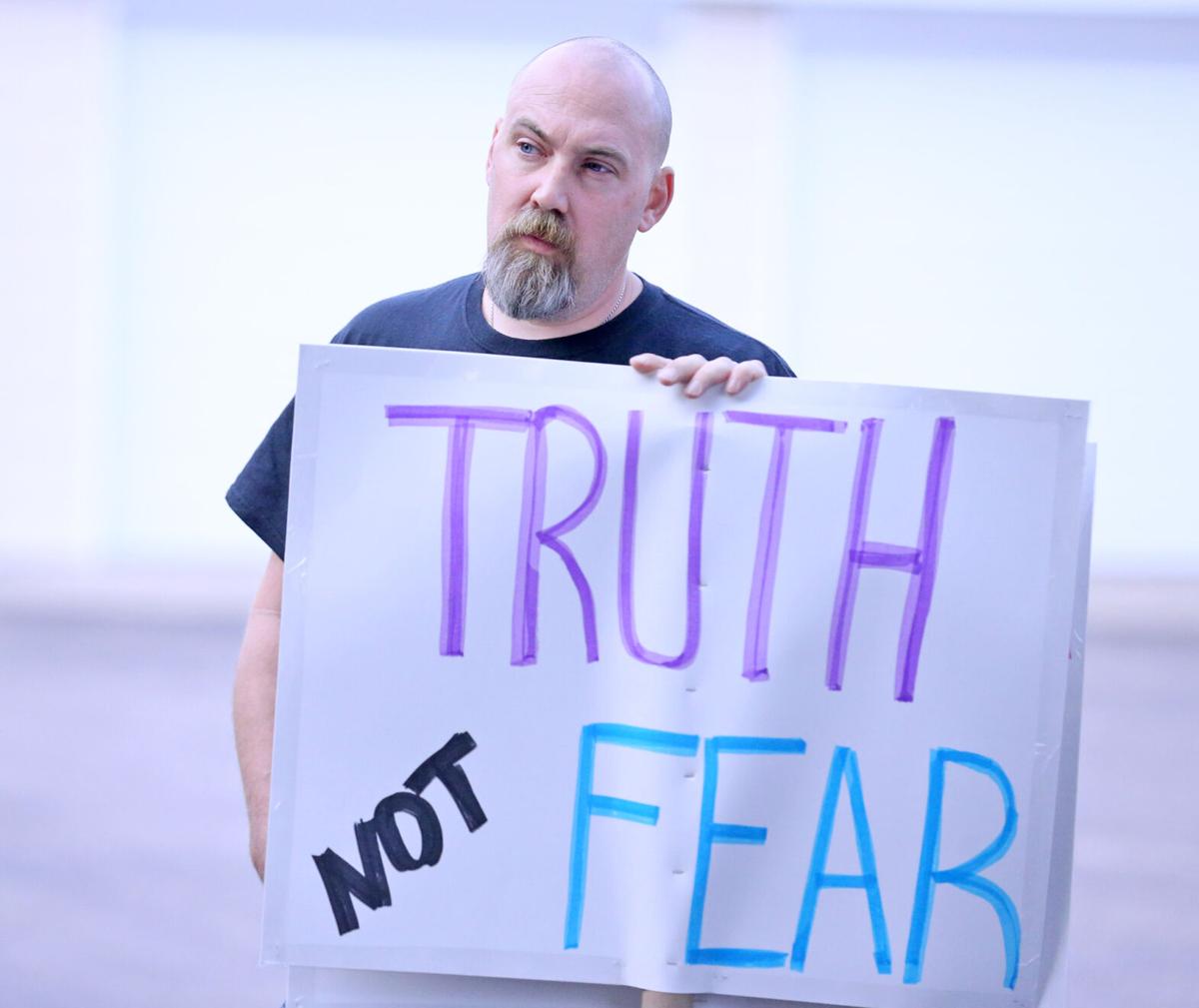 Luke Stange holds up a sign protesting the Central District Health Department's action at a protest held outside its board meeting Monday evening. (Independent/Austin Koeller)

Northwest Public Schools parents raised concerns about the Central District Health Department’s response to a positive COVID-19 case in the school district at a protest during the CDHD board meeting Monday night.

Lacy Beard said she and other parents were protesting to bring attention to the fact that CDHD is not following guidelines and is targeting Northwest.

“We started opening with no masks. We had one positive case, and CDHD pulled 120 kids out of school within two hours,” she said.

Beard said she also does not believe CDHD did any contact tracing at Northwest.

“They did not enter that building (Northwest High School) and talk to each individual student to see where they were located around the positive person and for how long,” she said. “They never talked to a single student or parent. They just got the class roster from the superintendent and pulled every single student on that roster out.”

When asked after the meeting about the protesters’ claim that she and CDHD are targeting Northwest, Health Director Teresa Anderson said she has no idea where that is coming from.

“We treat all of our schools the same,” she said. “A lot of our schools do not have mask mandates. There is no truth to the fact that we would target one school for not having a mask mandate over the others. We are doing the best we can to work with the school administration, and we have frequent communication with all of our schools about what should be done and what steps we need to take to keep kids safe.”

Anderson said the claim that CDHD did not do contact tracing also is inaccurate. She said contact tracing does not mean going into the school “with a magnifying glass” and interviewing everyone who was around the person who tests positive for COVID-19.

Once a positive case is identified in a school, Anderson said CDHD first will contact the school administration and let them know there is a positive case. From there, the health department will ask for seating charts and the names of kids who were around the person who tested positive.

“Then we talk to the teachers,” Anderson said. “If it’s an instance where a high schooler has gone class to class, we will talk to all those teachers and get seating charts. We also look at how long the child was in school when they were positive and if they had a mask on. If they were in school for three or five days with no mask, our concern is heightened and we are probably going to have to quarantine more people to ensure we do not have more spread of the virus.”

CDHD Board President Chuck Haase said he and another CDHD board member met with Superintendent Jeff Edwards and Northwest Board of Education President Dan Leiser for an hour to an hour and a half about issues facing the district.

“They were very polite and they had a lot of questions. We answered those questions to the best of our ability. But there are some things we just are not going to agree on what the answer is. That was clear then and tonight (Monday night) as well.”

Sarah Wade, a parent of two Cedar Hollow students, also voiced her concerns on CDHD’s mandates Monday night. She said the mask mandate — which CDHD has no control over and is put into place by the school district — is causing unnecessary anxiety, depression among both students and teachers at schools.

Wade asked the CDHD board how many Northwest Public Schools students out of the 120 students quarantined actually tested positive for COVID-19. Anderson said she could not answer that question, as she did not know.

“But we do know that some of them may have been asymptomatic and had it; we do not have that information,” she said. “We are working on trying to gather that going forward.”

Wade also asked for clarification on quarantines. She told Anderson that while the CDHD says it is a recommendation to follow quarantine and some parents follow it, others don’t. However, she said, when a parent chooses to send their asymptomatic student back to school, they then receive a phone call from CDHD and are told to quarantine them again.

“Originally, what we tried to do was the least restrictive method,” Anderson said during the meeting. “So we will call you and say, ‘Your child has been exposed and they need to quarantine’ if that is the case. If you as a parent say, ‘I am not going to quarantine my child,’ it is no longer voluntary; we will mandate that you quarantine them.”

Anderson said if a parent continues to refuse to quarantine their exposed child, CDHD will get law enforcement involved. However, she emphasized this is a last resort.

Wade also questioned if it was safe for a child to be breathing under a mask for hours “in a dark, wet moist environment where they are coughing and sneezing.”

“When you have a mask over your face, you are breathing out and breathing back in ...,” Anderson said. “So you are not going to make yourself sick by breathing in what you just breathed out.”

Beard said the desired outcome for her and her fellow protesters is to allow kids to be free and to let people choose whether they want to wear a mask.

Haase said he appreciated the protesters showing up to voice their concerns, that they needed to be heard and “were definitely heard.”

“We want to do whatever we can to hear what they want to say. I think the whole board was there listening to everything they were saying,” he said. “We want to answer all the questions as best we can. Some of them, we do not have the answer to, but we will give them the best answers we can. That is what they can expect if we have another positive case.”

Homicide ruled out in Aug. 4 death of Grand Island man

Officials have ruled out foul play in the Aug. 4 death of Devlin Kenney, whose body was found in a yard at 14th Street and Kimball Avenue.

During the past 14 days, there have been 94 new cases of COVID-19 in the Central District Health Department’s four-county jurisdiction.

How big is the demand for food right now? A half-hour before Saturday’s food distribution was supposed to start at Messiah Lutheran Church, th…

Monday Mysteries series: It was one of the city's more horrific murders

On a brisk February afternoon, 10-year-old Goldie Williams was sliding down the icy streets of Grand Island with her friends after school.

Before the women take the floor, Mary Ann Rickertsen shares that she is off two medications because of the progress she has made in the Fit an…

A Grand Island Senior High student said he hopes to help his classmates and be their voice on the Grand Island Public Schools Board of Education.

Luke Stange holds up a sign protesting the Central District Health Department's action at a protest held outside its board meeting Monday evening. (Independent/Austin Koeller)