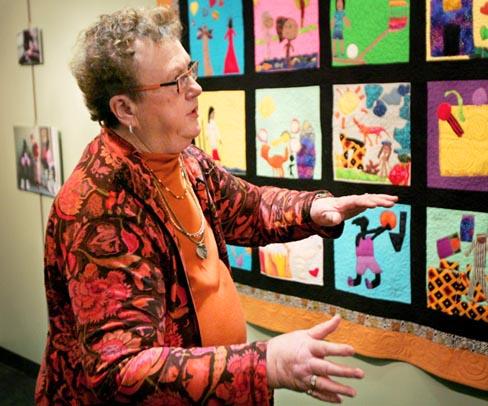 Kay Grimminger talks about her work to help finish the quilt that is the result of "The Quilted Conscience." The project involved Sudanese girls quilting their dreams and memories onto blocks that were then assembled into one large quilt. Independent/Scott Kingsley 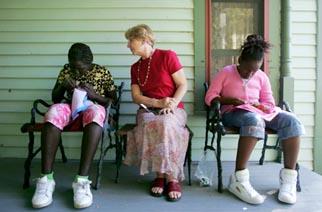 
Kay Grimminger was a member of the Abbott Sisters Legacy Committee when she first heard Grand Island native John Sorensen’s idea for “The Quilted Conscience” project.

Grimminger said Sorensen was proposing that Sudanese girls from the Grand Island public schools work on a quilt about their dreams and memories.

The result will be unveiled at 2:30 p.m. Sunday at the Edith Abbott Memorial Library as part of the annual Abbott Sisters Day.

Sorensen, who created the Abbott Sisters Project, thought the Sudanese quilt was a natural extension of his previous work about Edith and Grace Abbott because of the sisters’ concern for both children and immigrants.

“I thought it would be a great idea,” said Grimminger, who immediately volunteered to help. “I told him from the get-go that I would be part of the process of making a quilt.”

Grimminger said her own grandparents were among the first wave of immigrants who came from Schleswig and Holstein and settled in Grand Island.

“When my aunt started out at school, she spoke only German,” Grimminger said. She said it seems the Sudanese are repeating some of the experiences her own forebears had when they came to this country.

Many other people immediately volunteered, as well. Grimminger said she asked members of her small quilting group, the Flatwater Floozies, to guide the Sudanese students as they made their quilt blocks.

“We (the Floozies) have been together 25 years,” said Grimminger, who noted that her familiarity with the group was not the primary reason she asked for its assistance.

Karen Brasee, a former member of the Flatwater Floozies, also participated in the project. She made the back for the quilt.

Grimminger said she felt it was important to have people who not only knew quilting but also knew how to work with young people. She said teachers fit the bill.

She said one critical person to the project was Tracy Morrow, an English language learner teacher in the Grand Island.

“Without the children, we wouldn’t have the project,” Grimminger said. “Her (Morrow’s) work with ELL students meant she was able to find the girls.”

The students selected were between the ages of 10 and 18, Grimminger said. The first step in the project was to give the students a “skills test” to ensure they had the ability to work on a quilt.

Students created drawings about their dreams and memories, Grimminger said. They then did some sewing to show their capacity for that phase of the project.

Before the quilting project began, Grimminger said, members of the Flatwater Floozies cut out the pieces of fabric for the backs of the blocks.

When Hartwell came to Grand Island, “she and I picked out the colors that would be used on the quilt, and we picked out all the fabrics,” Grimminger said.

The Sudanese students were taken to Stuhr Museum for five afternoons to do their quilt work, Grimminger said.

During the Stuhr sessions, each student was asked to make two blocks. One block was supposed to illustrate the girls’ memories and the other their dreams for the future.

Not every girl was able to complete both blocks, because they also were involved in other after-school activities, which prevented some of them from making it to Stuhr Museum for all five afternoons.

The girls were divided into small groups, which worked inside the various homes at Stuhr Museum’s Railroad Town. Grimminger said students were placed in groups alongside their friends and girls of similar ages.

Grimminger said the students were very willing to give up their free time after school to work on the project.

“It was a great experience,” Grimminger said. She said it was humbling to learn about the girls’ interests, their life experiences and their dreams.

While the girls and adults worked on the quilt blocks, Sorensen was making a documentary, with cameramen Bruce Stanberg and Sam Holt shooting video of the girls, Hartwell and the adult quilters.

After the girls had finished their work for the week, their families were invited to Stuhr Museum on Sunday afternoon to see the quilt blocks.

After the 27 quilt blocks were finished, Grimminger said, she put the sashing around each block. The blocks were sewn together, and Grimminger put two borders around the entire quilt. Then Grimminger went to Les Soper of Red Door Quilting Co. to do the quilting.

Grimminger next bound the quilt and then put the sleeve on the back so it could be hung.

She then did one more job, making a legend to go with the quilt that would explain the symbolism on each block. Grimminger said she was afraid people might not fully understand the girls’ stories, which she called “very poignant and interesting.”

Sunday afternoon will represent a reunion for Hartwell, the adult quilters, other adult volunteers for the project and the girls and their families.

Sorensen, Stanberg and Holt will be at the library for the 2:30 p.m. unveiling. Grimminger said people will have a chance to view Sorensen’s partially finished documentary.

She said the documentary is still a work in progress because Stanberg and Holt will do more filming while in Grand Island.

That ceremony also will feature a viewing of the girls’ quilt and another sneak preview of Sorensen’s documentary.

Since the girls worked on their quilt blocks, two have moved to Fremont (and now Council Bluffs) and one to Omaha, Grimminger said. The plans are to include those three girls in the UNO ceremony.

“I think that (moving) is something that goes with being an immigrant,” Grimminger said, noting that people come to this country and live wherever they find jobs.

What is geographic information system mapping?

The Midwest was hit harder than any other part of the country during the polio epidemics of the 1940s and '50s. Now the generation that fought polio in their youth is up against COVID-19 as senior citizens.

Kay Grimminger talks about her work to help finish the quilt that is the result of "The Quilted Conscience." The project involved Sudanese girls quilting their dreams and memories onto blocks that were then assembled into one large quilt. Independent/Scott Kingsley