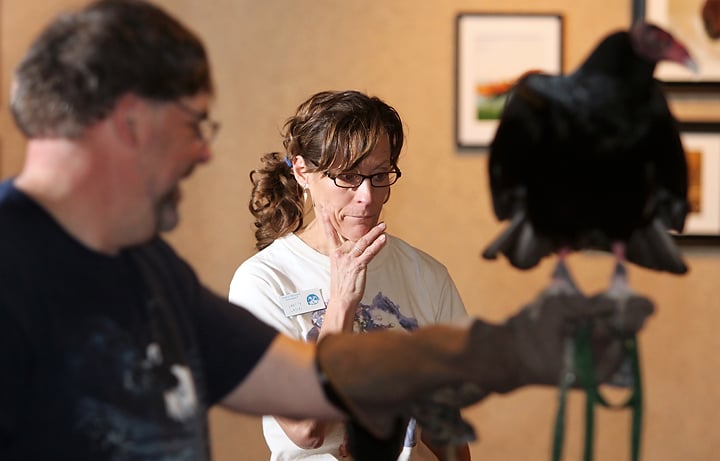 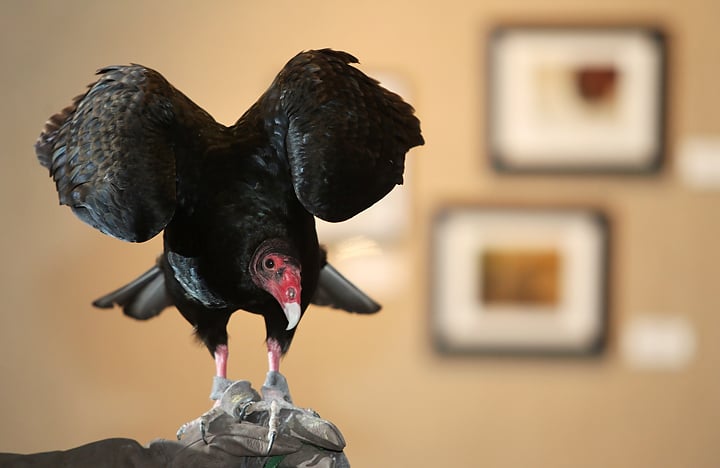 Sundance the turkey vulture raises his wings Thursday morning while being held by Blake Hatfield of Raptor Recovery Nebraska during a presentation to elementary students featuring birds of prey at Hastings Museum. (Independent/Barrett Stinson)

HASTINGS — A raptor is not a dinosaur, as one of the elementary-age students at the Hastings Museum thought.

Raptor is what birds of prey are called, explained Jeanine Lackey of Doniphan, a volunteer with Raptor Recovery Nebraska who spoke on Thursday to preschool and elementary students from Longfellow Elementary, Doniphan-Trumbull, Spalding Academy and the Parent and Child Center in Hastings.

Lackey and Blake Hatfield of Dannebrog showed the kids real examples of raptors, such as a red-tailed hawk, that Raptor Recovery has gotten because they were injured. She said the birds used in the educational program are those that are not able to be released back into the wild.

“These are wild birds that got hurt,” Lackey said.

She explained that, when they get a call about an injured raptor, the bird will have an X-ray taken to see if anything is broken. A veterinarian will repair any broken bones and give the bird medicine before it goes back to their facility to recuperate.

She said Raptor Recovery Nebraska, headquartered in Elmwood, has accepted 71 raptors already in 2012, adding that unfortunately almost half of the birds they get don’t make it. Those that recover completely are released back into the wild.

The five birds that the volunteers showed on Thursday are:

— Jack Sparrow, an American kestrel that has been with Raptor Recovery for less than two months. The American kestrel, weighing about half a pound, is the smallest falcon regularly found in Nebraska. Its wing was broken and didn’t heal correctly.

— Chinkapin, a broad-wing hawk, a type of hawk not often found in Nebraska but just migrates through in the fall.

“Each fall, she breaks her feathers off because she really wants to migrate south,” Lackey said, explaining that the bird throws herself against her pen, but the hawk can’t fly so it can’t be released.

— Cinmarron, a red-tail hawk that could not be released due to a gunshot wound to a wing that left it unable to fly. It was at least 2 years old when it was found in 1997, so it is at least 17 years old, Lackey said.

— Oberon, a great horned owl, found after it fell out of its nest as an owlet. Lackey described it as “not quite right in the head,” partly because it has no fear of dogs or other animals.

“He wouldn’t last long in the wild,” she said. “Physically, he is fine, but mentally he is a little off.”

— Sundance, a turkey vulture found between floors of an abandoned building by people investigating scratching sounds in a wall. Although Sundance was fostered by adult turkey vultures, Hatfield said he still believes it is human, or all people are turkey vultures.

The birds helped the students understand raptors more as Lackey and Hatfield explained how to tell if a bird is a raptor, the birds’ eating habits and how they use their different traits — such as sharp talons, hooked beaks, keen eyesight and excellent hearing — to hunt for prey.

“Is a cardinal a raptor?” Lackey asked the kids, adding with a smile, “Have you ever seen a cardinal jump on a rabbit and eat it?”

She explained that one way to remember whether an animal or bird is usually the predator or the prey is to look at the position of its eyes.

She also asked the students how a raptor may get injured and got good responses such as it may fly into a wire, building or car; it may get into a fight with another bird or while hunting; and it may even get shot or poisoned.

Ceperley said he was glad the museum could bring in programs such as Raptor Recovery Nebraska that allow kids not only to see an owl or hawk up close, but also to “learn an appreciation” for the birds of prey and how they help the world around them by eating “pest” animals.

“Even the little thing we do has an impact on nature,” he said.

Biden's Mission In Europe: Shore Up Alliance Against Russia

Sundance the turkey vulture raises his wings Thursday morning while being held by Blake Hatfield of Raptor Recovery Nebraska during a presentation to elementary students featuring birds of prey at Hastings Museum. (Independent/Barrett Stinson)