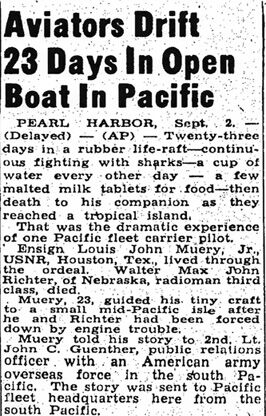 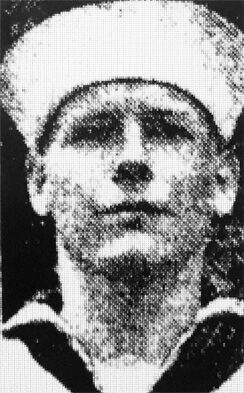 The Grand Island Independent is partnering with the Grand Island Public Schools Foundation to share veterans’ stories every Saturday through Memorial Day. The GIPS Foundation is fundraising to expand the stadium’s tribute to local veterans at Memorial Stadium at Grand Island Senior High School. Donations may be made at https://www.gimemorialstadium.org/how-to-help/ways-to-give.html.

By Liz Gamblin Special to The Independent

Somewhere an island the South Sea lies a graveyard with a unique grave. Within that grave, adorned with a handcrafted marker, lies the body of Walter Max John Richter, a Grand Island boy who gave his life in 1942 to protect the men of his ship and the man with whom he shared a life raft for 23 days.

This is the story of those 23 days, over three weeks of heartbreak, resourcefulness, courage and, above all else, self sacrifice.

Walter Max John Richter was born in 1917. He moved to Grand Island two years later with his parents and two older brothers. He attended Grand Island schools and graduated from Grand Island Senior High in 1936. After graduation, he enlisted in the United States Navy and went on to fight in World War II.

On May 21, 1942, Radioman 3rd Class Walter Max John Richter and Ensign Louis Muery Jr. took off from their aircraft carrier, the USS Hornet CV-8, on a routine air search mission. The Hornet was on its way back to Pearl Harbor, returning from the Battle of Coral Sea. As soon as the Hornet arrived at Pearl Harbor, it was immediately sent out to assist in the Battle of Midway. Muery and Richter were not on board, however. They had never returned from their search mission.

During the mission, Richter and Muery were flying in the South Seas when engine trouble forced the plane down. After the plane hit the water, they worked fast. They deployed the 7-foot life raft and gathered all the rations they had available. Once on the life raft, they quickly worked to lash the rations down so they would not lose them. As they worked, the men were not concerned. They assumed that the Hornet would soon realize they had not returned and would come looking for them. Knowing enemies were scanning radio communications, they knew not to contact the ship before their plane went down.

The first morning brought their first challenge. There were sharks in the water. Fortunately, they were able to fight them off with their oars.

Muery worked that first day to fashion a sail from their parachute so they could move with the wind. They also took stock of their rations. According to Muery, these consisted of, “two quart canteens of water, a .45-caliber pistol and 21 rounds of ammunition, emergency rations normal for two days, two folding aluminum paddles, an air pump for the raft, patching equipment, a first aid kit, rubber life jackets, three pocket knives, two signal flags, a stainless steel mirror, a whistle, our watches and my parachute. We had no navigation equipment.”

They made a plan that allowed for them to ration their food for 40 days. They were also conscious of how little water was available and decided to wait as long as they could before they drank anything. Knowing the longer they were in the life raft, the harder it would get, they made the decision to wait for water as long as they could.

After three days, they finally took a drink of water. Only one mouthful each. They limited their food to one square of chocolate or a few sips of the liquid food supplement that was a part of their rations.

After 10 days they made the heartbreaking discovery that their water supply had spoiled. They waited for rain. Fortunately, rain fell in the next couple of days. Once again, their resourcefulness shone through — they used the bandages found in the first aid kit to absorb water to drink.

As the days wore on, everything was a struggle. The sun was unbearable as it beat down on their skins day after day. In an effort to help their raft move more effectively, they decided to throw overboard anything nonessential to make the raft lighter.

Another challenge was ocean squalls. More than once, an ocean storm capsized their raft. They were thrown into the ocean and had to fight their way back to right the raft and climb back in. This act took almost all the strength they had.

After almost three weeks adrift, the men were getting desperate. They were starved and dehydrated. The sun had ruined them and had beaten them down. They made promises to one another that they would keep each other from drinking the ocean water as they no longer trusted themselves to make rational decisions.

At the end of their third week, tragedy struck. A shark managed to puncture the bottom of their raft. Once again, they used their oars and managed to knock him away. Then, the men had to flip the raft over while one of them worked in the ocean to repair the puncture and the other, perched on top, fought off the sharks. They managed to escape.

On day 22 they knew that they were about at their end. They took the precaution of keeping their life vests on permanently. Should they be thrown in the ocean again, they knew they would not have the strength to make it back to the raft.

On day 23, the miraculous happened. They spotted land. Using their oars, they made their way in that direction. As they approached the island, the surf proved to be too much for the little raft and both men were thrown overboard. Some time later they washed up on shore. When Muery came to, he noticed Richter was not breathing. He immediately began mouth-to-mouth resuscitation. He did this until he passed out.

When Muery came to again, he knew there was nothing more he could do to help Richter. He also knew he couldn’t just leave him there. He dug a grave and buried his shipmate the best he could. As he began to look around the island, he was discovered by island natives. They took him in and nursed him back to health. While recovering, it was discovered that the shallow grave Muery had dug had not been strong enough to fight the waves. And before the ocean could claim Richter, the island natives took his body and placed it in their graveyard in a section designated for heroes. They were able to radio for help and Muery was rescued a short time later. As he was leaving, he noticed the handcrafted headstone that they were making to place upon Richter’s grave.

Walter Richter’s story is one of self-sacrifice. As he and Muery’s plane was going down, they could have radioed for help. One quick message to say they went down and their location. But they didn’t send that message. They knew the enemy was listening. They knew that one message could mean disaster for the Hornet. So they sacrificed their rescue for the safety of their crew.

For more than three weeks on that life raft, Richter and Muery daily had to sacrifice their own comfort and health for each other.

Then came that awful day on the beach. When Muery saw Richter’s lifeless body, he sacrificed the very air in his lungs until he was unable to give no more. He gave every ounce of strength and every breath he could to Richter until he passed out.

How heartbreaking it must have been for him to regain consciousness only to discover it had not been enough. Knowing there was no more he could do for his shipmate physically, he set to work digging a grave so as to honor him. It’s unimaginable how he summoned the strength needed for that task, both physically and emotionally.

The islanders who found them sacrificed, too, their time, land and talent to give Richter a proper hero’s burial. A man they had never met, who continues to be honored to this day for his sacrifice on an island in the South Sea.