What's next for the COVID relief bill? And when will the $1,400 payments reach Americans?

Split, but still united for kids: Hawley, Jurgens move past divorce, serve together on Grand Island Public Schools board
0 comments
Share this
{{featured_button_text}}
1 of 2 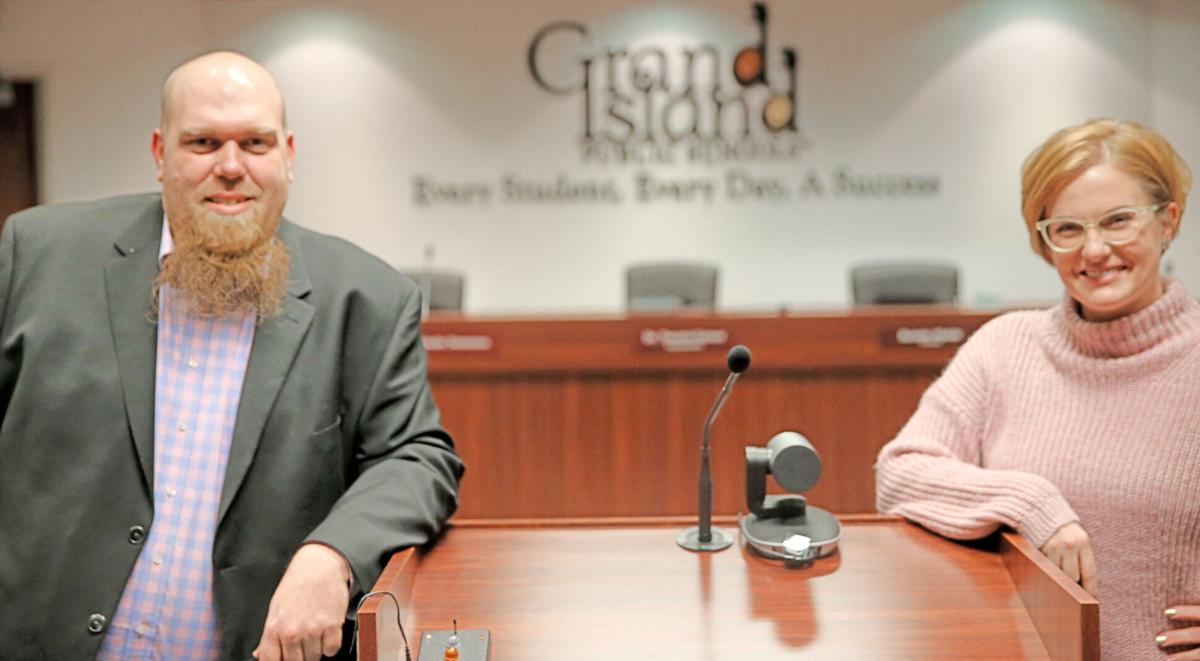 Grand Island Public Schools board members Josh Hawley and Lindsey Jurgens stand next to the podium in the district's board room. Despite being divorced, Hawley and Jurgens say they are serving together on the board to show their kids they can work together. (Independent/Austin Koeller) 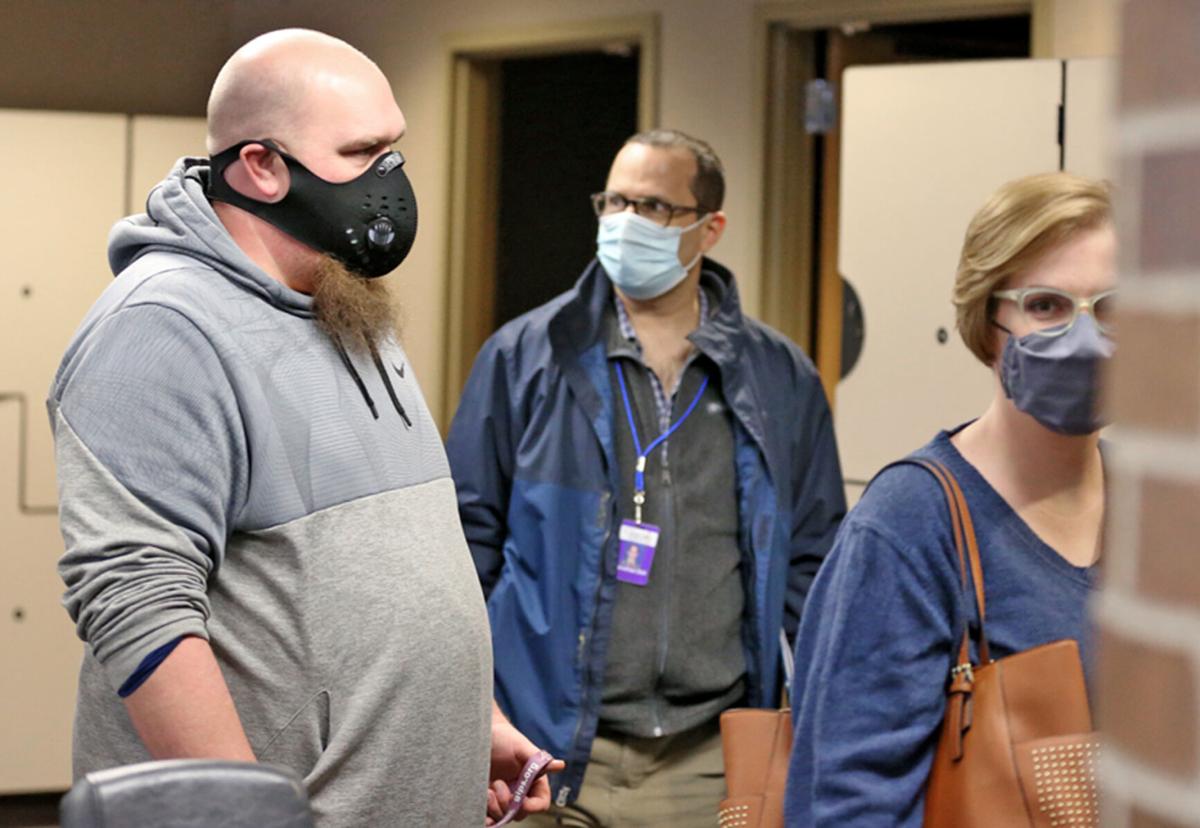 Grand Island Public Schools board members Josh Hawley (left) and Lindsey Jurgens (right) tour the former Principal building with Jonathan Doll (center), chief data analyst and organizational strategist, and other members of the board Thursday. Despite being divorced, Hawley and Jurgens say they are serving together on the board to show their kids they can work together. (Independent/Austin Koeller)

As members of the Grand Island Public Schools Board of Education, Josh Hawley and Lindsey Jurgens said they hope to put all kids first, including their own.

“Since we have been divorced, we have done every parent-teacher conference together,” Hawley said. “We go to every sporting event and sometimes we sit together. We exchange time for each other’s vacation, so our kids are not used to seeing us at odds. They are not used to us having that angst toward one another.”

Hawley and Jurgens said they decided on their own to run for the GIPS board last fall. However, once they both knew they planned to file for election, they said they supported each other in their respective races.

“Josh ran unopposed, so his seat was secure, but mine wasn’t,” Jurgens said. “I was going to cheer him on no matter what because I said from the beginning that he would be an excellent fit for the GIPS board. He also conveyed support in my direction.”

Hawley said because Jurgens had a contested race in the May 2020 primary election he talked with people in her ward about why she should be elected to the GIPS board. Jurgens said that even though Hawley couldn’t because of the pandemic, he offered to help her campaign by walking her ward and knocking on doors.

“That is not even unusual,” she said. “I swear if we had been doing that, our kids would not even have thought twice about it.”

Jurgens said when she and Hawley first told their kids they would both seek seats on the GIPS board, and possibly serve together, they had questions about what it meant to serve on the board and how the board made decisions for students.

“I said, ‘If I win my seat (Hawley ran unopposed), we will be on the board together with this other group,” she said. “None of them (kids) ever said, ‘Do you think that is going to be weird to do that (serve on the board) with Dad?’ I think they are just really used to seeing us working together.”

Jurgens said she initially questioned whether serving with Hawley would cause conflict.

“Even though we are not spouses — we have shared kids in the district — I didn’t know if they were any parameters around that,” she said. “ But everyone said, ‘No, go for it.’ So we both did.”

Jurgens said it is “unrealistic” to think that she and Hawley never — and will not ever — disagree. She said they often have tough conversations, both as GIPS board members and as parents to their three children, but they never get heated. Hawley agreed.

“We just have a mutual respect for one another,” he said. “We were married for quite a long time, but once we put all those things behind us, people have value and Lindsey has such a tremendous value. We both bring different strengths to different things. It is about being human and putting the priorities first.”

Jurgens said the biggest thing they have learned to do while co-parenting and serving on the GIPS board was to stop and listen to what the other person is saying.

“I really feel that a big game changer for me was to stop and look at how the other person sees it. It is not ‘the Lindsey show,’” she said. “It is stopping and saying, ‘What is he (Hawley) saying from his seat?’ There is a real difference there.”

Hawley said with co-parenting, he and Jurgens can disagree on a situation with one of their children and “leave it at that.” However, on the GIPS board, he said they cannot do that and everything has to be reconciled eventually.

Hawley said he hopes that, by seeing him and Jurgens serve together on the GIPS board, Grand Island residents will see that couples can move past divorce.

“I would like people to see that there is another way,” he said. “No, we don’t agree on everything, but we support one another because we put our priorities in the right order. Our children are first, no matter what. If people can see what we’ve done, and make the choice to change their bad situation, it has a ripple effect because others will see it and more children will grow in positive co-parenting relationships that are important.”

The Central District Health Department last week identified a cluster of positive COVID-19 cases among a number of people who work at JBS in Grand Island.

Funding is available to help immigrants with fees they face while working toward citizenship.

Chelsey Liess, who will be the new principal at Heartland Lutheran High School, wants the school to have an impact in students’ lives. Liess is currently a physical education teacher at Walnut Middle School with Grand Island Public Schools. A Grand Island native, Liess has both a private and public school background.

Merrick County Attorney Lynelle Homolka of Central City has been named a county court judge in the Fifth District, which consists of Boone, Bu…

As Fonner Park pursues a casino operator, CEO Chris Kotulak told the Hall County Board of Commissioners on Tuesday that keno will still have a presence there.

Grand Island’s Stuhr Museum of the Prairie Pioneer and Tommy Gunz Bistro are among the 70 stops included in the 2021 Nebraska Passport program.

As new variants of the COVID-19 virus spread, wearing a mask and getting vaccinated are vital to keeping the infection under control, said two CHI Health Creighton University disease physicians during a Zoom conference call with reporters Monday.

Grand Island Public Schools board members Josh Hawley and Lindsey Jurgens stand next to the podium in the district's board room. Despite being divorced, Hawley and Jurgens say they are serving together on the board to show their kids they can work together. (Independent/Austin Koeller)

Grand Island Public Schools board members Josh Hawley (left) and Lindsey Jurgens (right) tour the former Principal building with Jonathan Doll (center), chief data analyst and organizational strategist, and other members of the board Thursday. Despite being divorced, Hawley and Jurgens say they are serving together on the board to show their kids they can work together. (Independent/Austin Koeller)