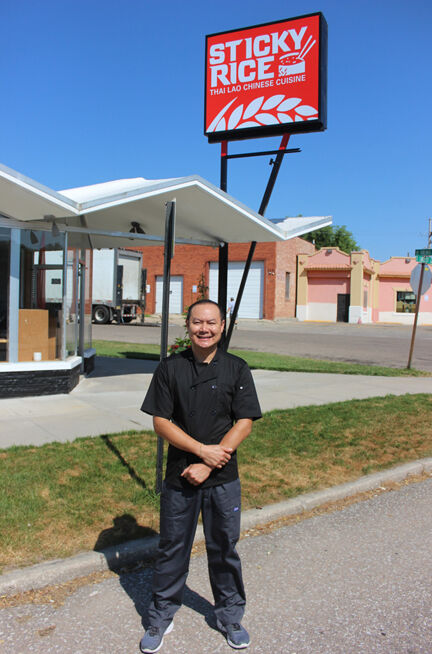 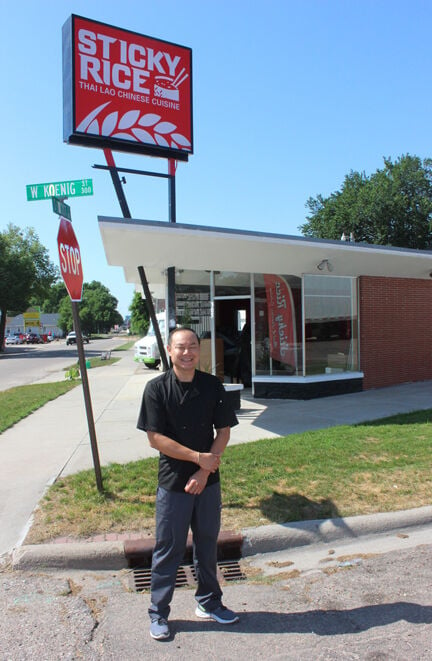 Manivong is opening a Sticky Rice restaurant at West Koenig and South Locust streets, right across from Sanchez Plaza. That’s also the place where he’s permanently parked his food truck.

He’s still cooking in that truck, which he’s used since 2011. But he’s in the process of turning his new home base into a carryout restaurant.

Ever since he started Sticky Rice, Manivong has wanted a permanent location. The food truck “was just a means to an end,” he said.

He hoped to have his own place in three to five years, but it took longer than he expected.

Manivong likes his new home at 305 W. Koenig, which was long the home of OK Liquor. Even as a young man, he thought the building was “really unique.”

The style of the building, particularly its roof, reminds him of Asian architecture. “It’s kind of got ridges and sharp edges,” he said. “So that really matches the theme of my restaurant.”

He’s glad the building was available when his financing came through. It was “a perfect storm,” he says.

Manivong feels confident about having his own place because he has developed a good base of customers.

He moved the truck to its new location in March.

Sticky Rice is open for business just as much as it ever was. It’s open Monday through Saturday from 11 a.m. to 2 p.m. and 5 to 8 p.m. Between lunch and dinner, he uses the time to restock.

He recommends that people order their meals online. It’s more convenient for both Manivong and his customers.

Even though the exterior is complete, Manivong is still remodeling his new home.

He’s doing the painting, the drywall and other uncomplicated chores.

Manivong does not have a wife or children. The business, he says, is his baby.

He leases the building from Filamon Sanchez of Sanchez Plaza.

If things work out, Manivong might be able to cook in his new building later this year. The biggest step will be installing a hood ventilation system.

A few years from now, Sticky Rice might be a sit-down restaurant. But that won’t happen anytime soon.

City code won’t allow him to offer seating either inside or outside for now. The bathroom won’t be available for public use until it complies with the Americans with Disabilities Act.

Manivong, who turns 44 on June 26, is just happy to have a carryout location.

He also sees more traffic than the last place he parked his food truck. That location was at 12th and Eddy, next to the Budda Matta Phaaphayaram Lao Buddhist Temple.

Born in Laos, he came to Grand Island with his family as a youngster. He graduated from Grand Island Senior High in 1996.

He learned his cooking skills from his uncle, who owned a Sticky Rice restaurant in Ithaca, N.Y.

He recommends that more people try Pad See Ew, a soft noodle dish made with vegetables and a sweet soy sauce.

What does Manivong say to people who’ve never been to Sticky Rice?

His original idea was to take the truck to area events.

“But it’s not as fun as it sounds,” Manivong said.

When he takes the truck out, “you can’t enjoy the event you’re at” because you’re too busy working, he said.

People probably don’t appreciate a food truck as much as they should.

It’s hot working inside a mobile kitchen. When it’s 96 degrees in Grand Island, it’s 102 inside the Sticky Rice truck.

So the work is difficult.

“But at the end of the day, when you make sales, it’s worth it,” Manivong said.

He will still take his truck to area events. But he doesn’t feel comfortable driving the 1979 Chevy stepvan too far.

“The truck’s kind of old. It’s on its last legs. I don’t want to take it too far out of the city,” he said.

Manivong has figured out all of the advantages his new building offers.

One of them is “there’s a big old cool basement down there,” he said.

When the temperature climbs in Grand Island, it’ll be a great place to take a break.