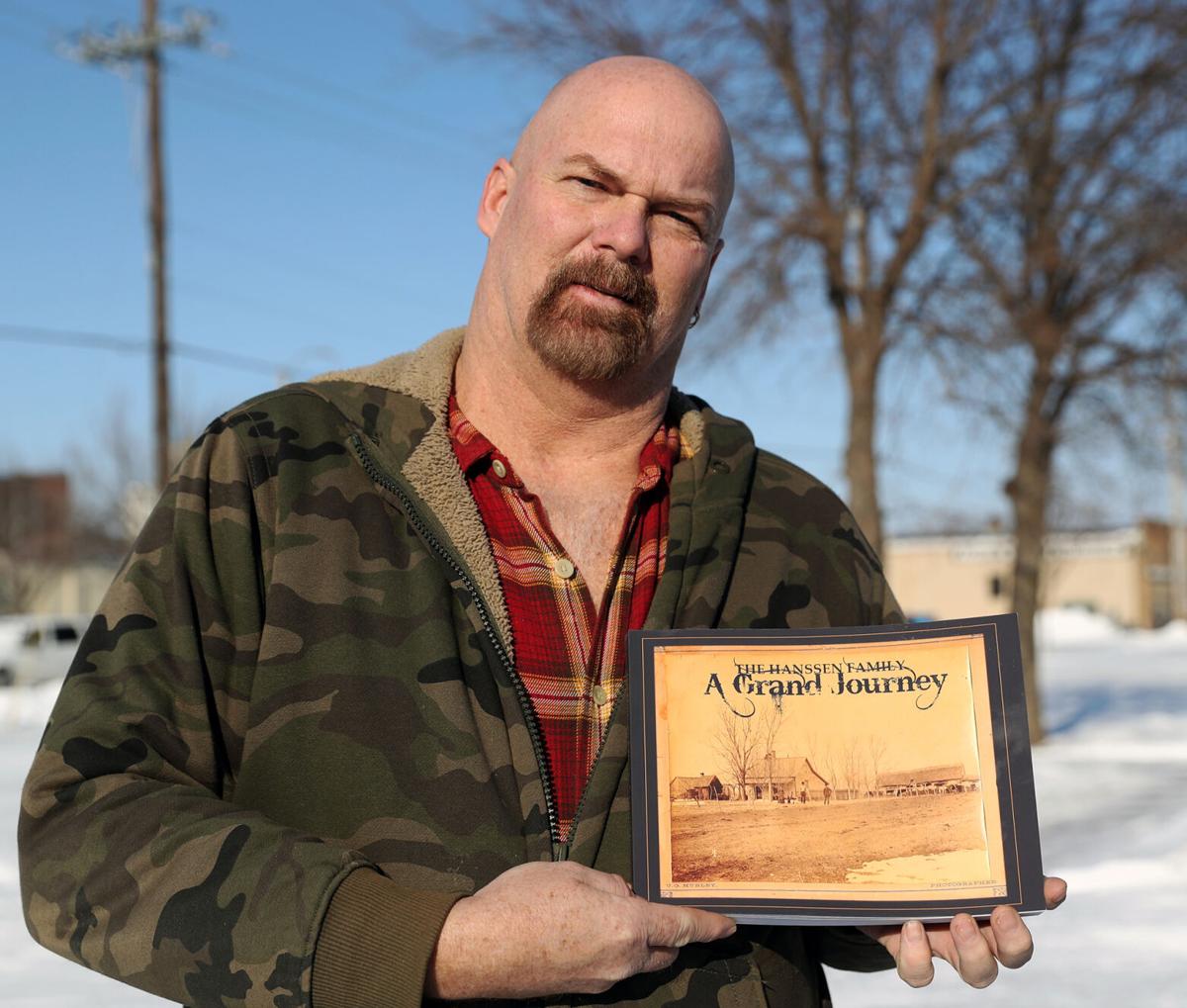 John Hanssen of Grand Island has written a book about his family that details life in Grand Island from the 1870s to the 1950s. (The Independent/Josh Salmon) 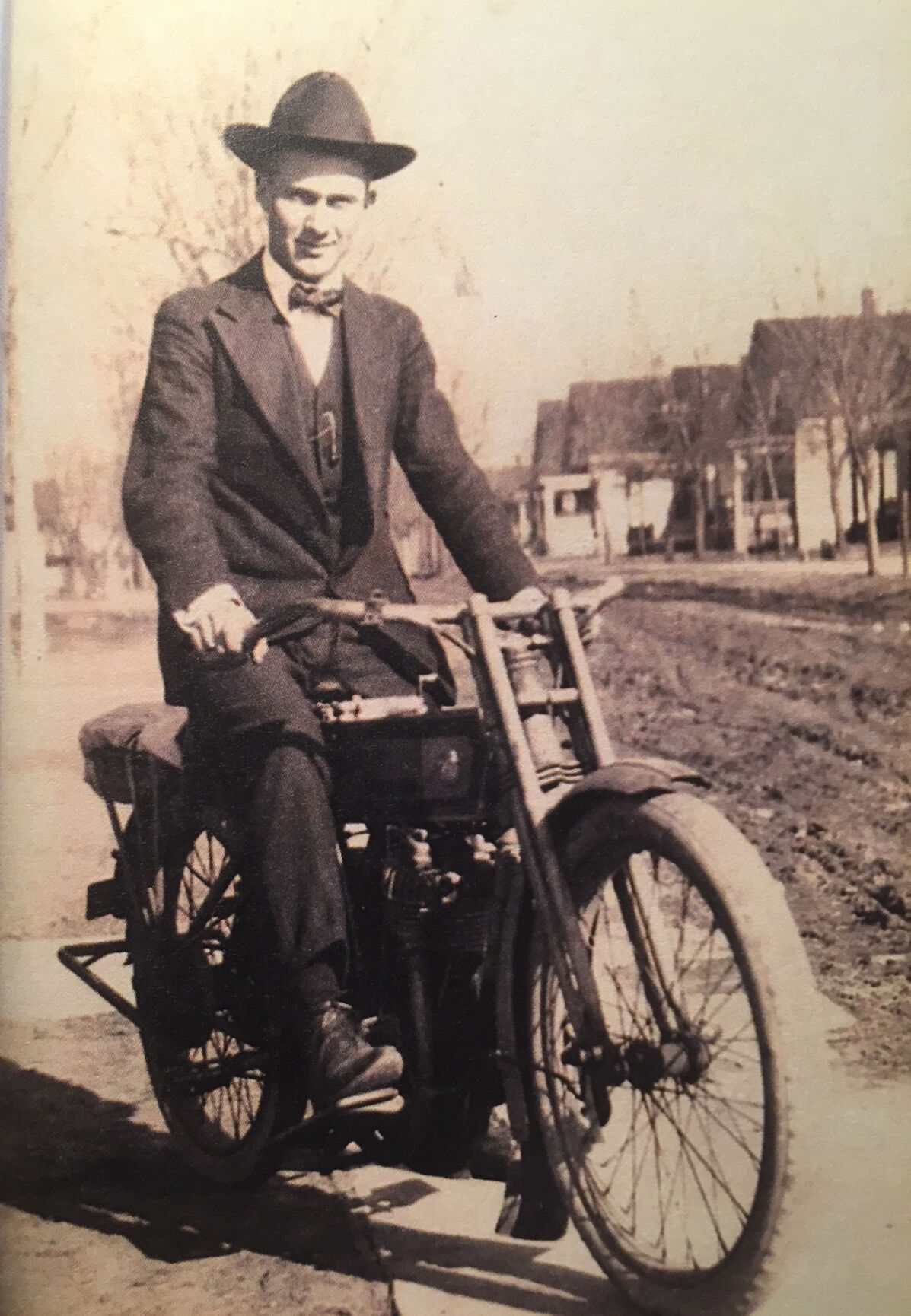 Arnold Hanssen, the son of J.M. Hanssen, rides a 1911 Excelsior motorcycle in Grand Island. (From “The Hanssen Family: A Grand Journey”) 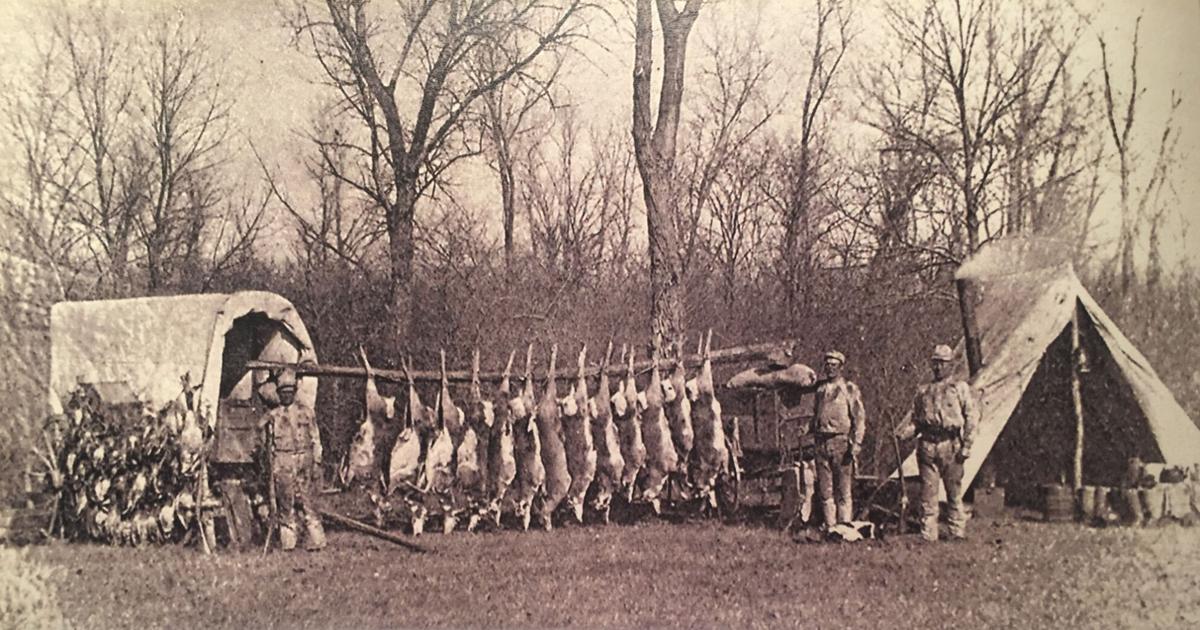 J.M. Hanssen was one of the hunters on this deer-hunting excursion in the 1880s at Big Creek on the Middle Loup River. (From “The Hanssen Family: A Grand Journey”)

Over the course of his 87 years, J.M. Hanssen recorded many details of his life, which is to the benefit of anyone who wants to know about life in Grand Island in the pioneer years and beyond.

He left behind detailed journals, financial ledgers and an unofficial autobiography. His great-grandson, Grand Island resident John Hannsen, relied a great deal on those materials to compile a new book called, “The Hanssen Family: A Grand Journey.”

The material provides a treasure of information.

Hanssen says his great-grandfather was typical of the “old Germans who never threw anything away.”

John Hanssen, born in 1969, has always had great interest in his family’s background and in Grand Island history.

His family connections go back to the beginning of Grand Island. A portion of his family farm was the original homestead claim of Detlef Sass, one of the first 37 settlers who arrived in 1857. Hanssen’s home is a half mile south of L.E. Ray Lake.

In the book’s dedications, Hanssen thanks his grandmother, Paula Hanssen, “who instilled in me the importance of my family’s history and, by her own example, to preserve as much of that history as possible for future generations.”

Paula was a granddaughter of Detlef Sass.

Hanssen put the book together with author Amy Peirce, a Hastings College graduate who divides her time between Virginia and Nebraska.

Through the history of Hanssen’s family, the book gives a detailed look at a world common to many pioneer families.

“The documents provided a glimpse into the lives of the immigrant family, early-day settlers in Nebraska, farmers and stock raisers in Hall County, and hunters of the Great Plains,” Peirce writes in the preface.

The written documentation was augmented by Hanssen’s genealogical research and census records.

In putting the book together, Hanssen didn’t want to just list the dates of when one person married another. He wanted to provide an interesting history of the family’s life and times.

In addition to the Hanssen family, readers also will learn about many other pioneer Hall County families, such as the Heins, Blunks, Haggis, Neuberts, Sasses and Stolleys. Most of those people lived in the area south of Grand Island.

John Hanssen is the son of the late Willis “John” Hanssen and Sharon (Sanders) Hanssen.

Hanssen, 51, is a longtime Hall County Historical Society board member. He is a graduate of Northwest High School and the University of Nebraska-Lincoln. He works at the Green Plains ethanol plant in Central City.

The story begins with Thies and Louisa Hanssen, who were natives of Brickeln, near Burg, Holstein, Germany. That community is near the Danish border.

They traveled to the U.S. with their family in 1870 on a ship known as the Allemannia. Louisa kept a detailed diary of their journey, which is included in the book.

On board the ship was J.M. Hanssen, their 5-year-old son.

Many Germans were lured to the U.S. by companies such as the Burlington and Missouri River Railroad, which circulated pamphlets heralding the attractions of the Midwest. Some Germans saw stories written by a prominent Grand Island settler.

J.M. Hanssen writes that “the homeland was flooded with literature, praising the land and conditions of Illinois, Iowa and Nebraska. Fred Hedde, who was one of the early settlers of this community, wrote the articles, which later only proved partly true or proved distorted. The folks, when they first arrived, had a number of those articles, which were frequently discussed and criticized …”

Readers also will appreciate how much the area has developed during the years.

“They found Hall County to be rather ‘primitive,’ and a place where ‘roads were unknown, following lines of least resistance; fjords and trails all over; no fences of any kind; and houses few and far between,’” the book says.

The book talks about friendly relations with neighboring Indians.

When J.M.’s parents lived in town, they often were visited by an Indian couple who had a 1-year-old girl. The man, known as George, could speak some words of English.

J.M’s mother, Louisa, fixed clothes for the little girl, “which delighted the Indians very much,” he wrote.

J.M’s parents made it known they “would very much like to have a buffalo robe such as were often used by the settlers for bedding and as cover when driving.”

J.M. also wrote that, “George and his wife were never driven off and, most of the time, got what they came for - a thick slice of bread with a liberal dressing of scalded New Orleans molasses.”

Beginning at a young age, J.M. loved hunting, a necessary skill since his family lived mostly off the land. Many species of fowl were plentiful in the area.

He wrote that he saw hundreds of prairie chickens “in the wintertime when they flocked together.” Sharptail grouse were plentiful in some years, and the sheer numbers of geese were “very hard to describe for the present-day harder to believe,” he wrote in 1939.

J.M. also described “market hunters,” who dramatically reduced the number of geese along the Platte River.

In the early 1880s, two men hunted geese for the market for two months every day in the spring.

“They were the first decoy and blind hunters our locality had ever heard of, using newspaper over sand piles as decoys.” J. M. wrote.

The hunters quit each day after they bagged 80 geese, “which must have been their daily contract,” he wrote.”They moved in during the forenoon and were often reported to have had their limit in an hour. The rest of the day was used to barrel and ship the geese and (to) load shells and get ready for the next day. It was reported that the Platte had a number of such outfits up and down the river.”

From the late 1870s to 1892, “I had the time of my life,” J.M. wrote. During those years, it became his duty “to supply the table with game,” not just with prairie chickens “and old roosters but the choicest that the countryside offered.”

He generally hunted two days a week. Sometimes he shot for longer periods on Saturdays with Sunday dinner in mind. “I always was glad when company was announced because that meant more” hunting, he wrote.

The book includes photos of great deer hunts. One photo shows the bodies of 13 deer, hanging together from a log.

A clipping from the Grand Island Herald in 1926 attests to her feisty nature.

People from Grand Island made a habit of coming to the Hanssen farm to steal chickens. During the past summer, the family had lost about 50 chickens.

“When the boys were outside they were supposed to listen for people” who might be stealing, she wrote. When she was alerted, “I would start the Model T and chase after them.”

One day, after hearing a shot fired, she hurried to the road and saw a man driving away in a truck at a high rate of speed.

She got into her car, overtook the truck and got its license plate number. She received a $200 reward from the Hall County Protective Association.

The book includes color photos, such as a photo of an 1898 christening gown, and depictions of other documents, such as a 1938 Western Union telegram.

One ad is for an 1898 appearance in Grand Island by Buffalo Bill’s Wild West and Congress of Rough Riders of the World.

Here’s evidence that the Hanssens saved just about everything:

In the book is a copy of the motor vehicle registration for an Excelsior motorcycle that J.M’s son purchased in 1913, and an 1890 certificate from the Grand Island Business College and Institute of Penmanship and Shorthand.

History of a Hall County family

CAIRO — On the edge of the Sandhills, along the banks of the Loup River, outside Cairo, the High Plains Regional Rendezvous is taking place th…

John Hanssen of Grand Island has written a book about his family that details life in Grand Island from the 1870s to the 1950s. (The Independent/Josh Salmon)

Arnold Hanssen, the son of J.M. Hanssen, rides a 1911 Excelsior motorcycle in Grand Island. (From “The Hanssen Family: A Grand Journey”)

J.M. Hanssen was one of the hunters on this deer-hunting excursion in the 1880s at Big Creek on the Middle Loup River. (From “The Hanssen Family: A Grand Journey”)