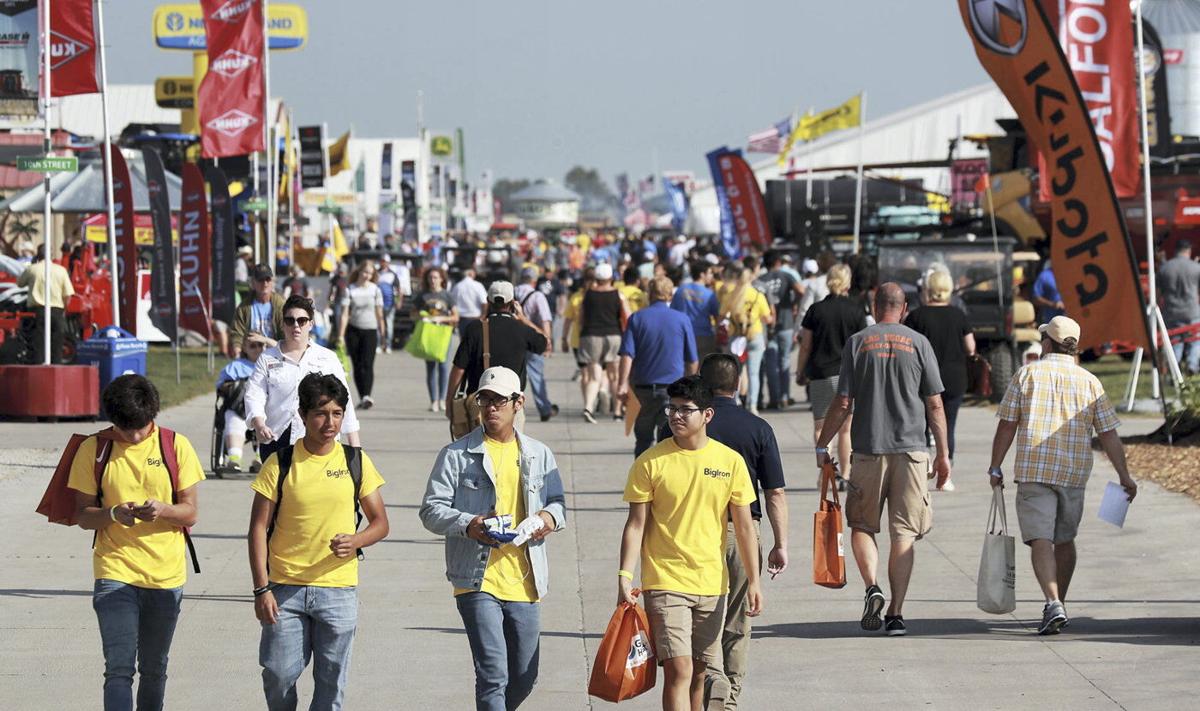 A large crowd makes its way along Central Avenue at the Husker Harvest Days site west of Grand Island in 2019. After a year off because of the pandemic, the three-day agriculture show returns to Grand Island starting Tuesday. (Independent/Barrett Stinson/file) 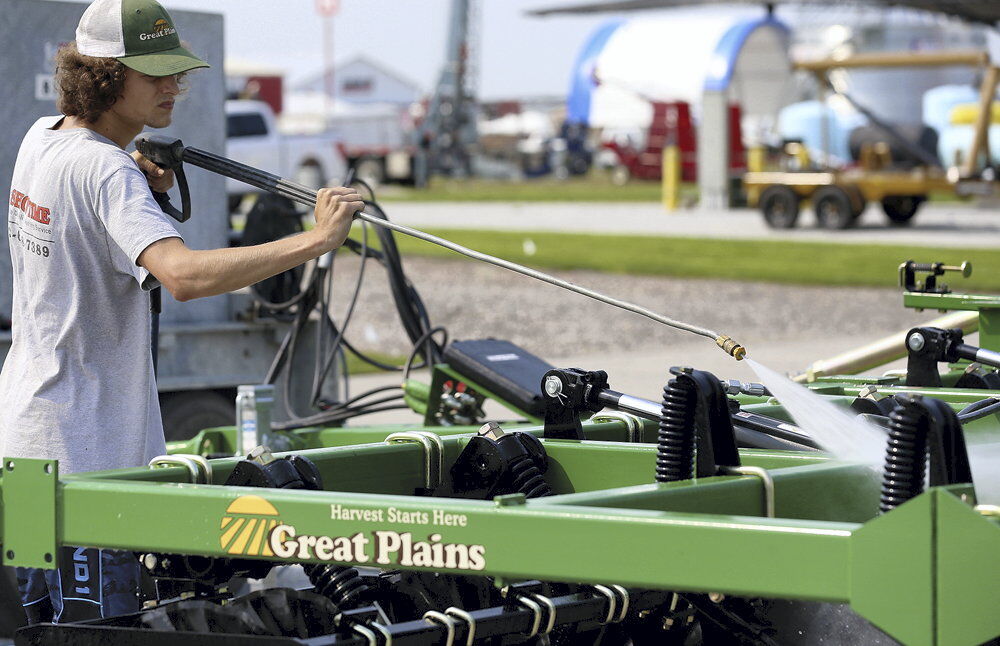 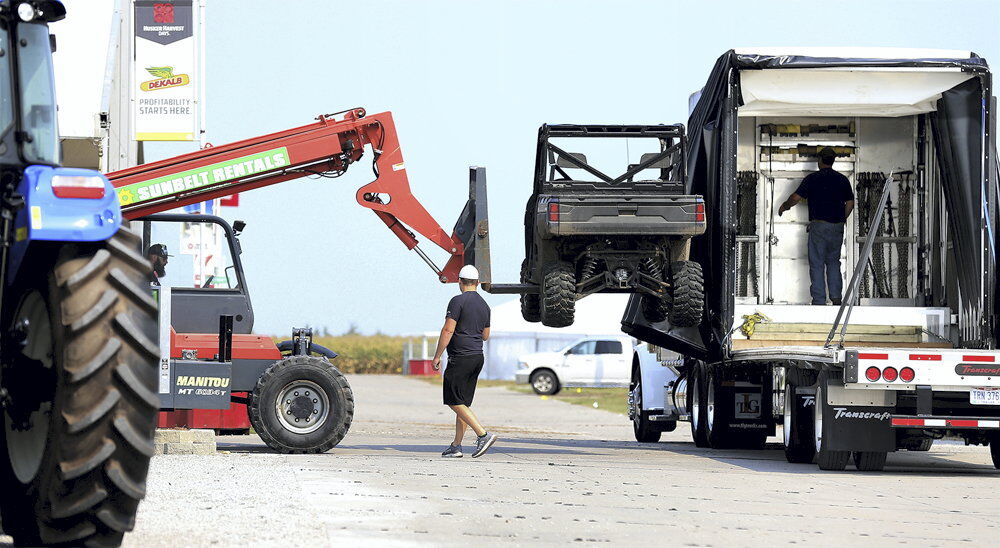 A forklift is used to unload a utility vehicle to be used by employees of Bayer Science during Husker Harvest Days, which starts Tuesday. Prep work at the site west of Grand Island started several days ago. (Independent/Josh Salmon) 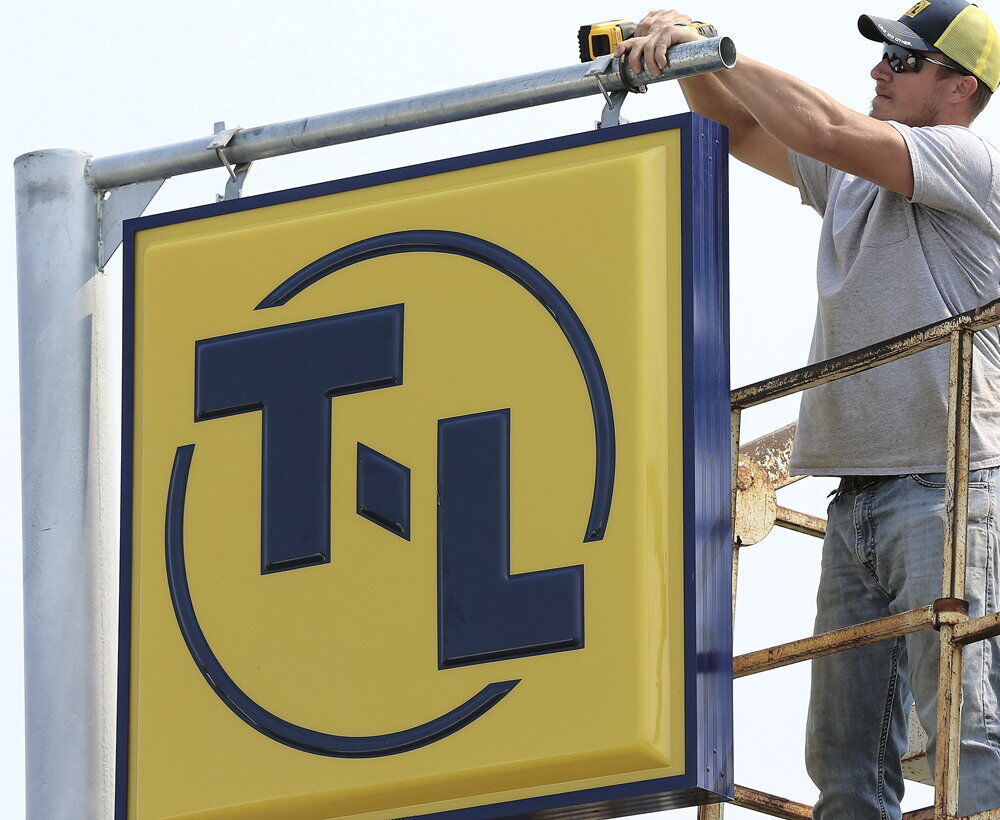 Jeff Peters with T&L Irrigation hangs a sign outside its Husker Harvest Days location on Thursday. Prep for the event started several days ago. (Independent/Josh Salmon)

More than 100,000 visitors take in the three-day agricultural show each year, but because of the public health directives to stop the spread of the pandemic, Farm Progress Events Manager Matt Jungmann, who directs the operations of the show, said organizers had no choice but to cancel last year for the first time in its 44-year history in Grand Island.

Jungmann, who is in his 16th year as HHD manager, said they decided to cancel last year’s show on June 29. HHD is one of the world’s largest farm shows with an emphasis on irrigation and new technology. Besides the dictates of the public health directive when it came to halting the spread of the virus, companies that normally show at HHD were under their own restrictions because of the pandemic.

“I think we did a great job of putting together a virtual event, but the thing that we learned from it is that growers really want a live show,” he said. “They want to kick tires. They want to interact. They want to to see it, touch it, feel it and a lot of this kind of stuff.”

Jungmann said this year’s show is still feeling the after shocks of the ongoing pandemic with labor and material supply shortages. While farm equipment manufacturing is up and running, many companies are feeling the impact of the pandemic, whether its a shortage or no supply of valuable parts for the equipment they manufacture, or not enough labor to meet consumer demand.

What that means for HHD, Jungmann said, it that HHD’s exhibit field will be a little lighter when it comes to vendors. But, he said, it’s not as bad as it could be as show officials said the show will have only 8% of its exhibit space empty.

“Most of it is companies going from 10 lots to six lots or four lots or two lots because they don’t have the inventory to fill the exhibit space for the most part,” he said. “They have throttled back their presence a little bit because they just couldn’t get the iron or the machinery. Tents are hard to come by and the world is kind of short staffed.”

While Jungmann said HHD probably won’t be setting any records this year, they have learned some important things from their recent Farm Progress Show in Illinois.

“We had a great attendance, but it wasn’t any kind of record breaker,” he said. “There are still people who don’t quite feel comfortable getting out there.”

The Nebraska State Fair ended on Labor Day, and while the pandemic kept back some vendors and exhibitors, the event drew good crowds and the carnival and food vendors experienced tremendous sales.

Jungmann said even though HHD will be pared down slightly from its normal 600-plus vendors, they are just glad to be having a live show again.

And he said people attending the show will see “a lot of cool stuff.”

For example, Jungmann said because last year’s live show was canceled, many of the major farm equipment manufacturers were not able to preview their latest technological advances at the show. So, at this year’s show, there will be a lot of new farm equipment that will be seen for the first time and will revolutionize how farming is done in meeting the challenges of the future.

Each year, farm equipment is developed with ever more precision in getting the job done with fewer resources. That technology can be in the form of drones that will do a host of farm jobs, such as scouting fields or spraying for insects or crop diseases. Or it can involve automated equipment with sophisticated on-board computers that can shave off even more hours of work, making it possible to plant and harvest thousands of acres of cropland in a matter of hours rather than days, saving a lot of money by using resources more effectively.

One of the ironies is the parts that make these machines so efficient are in short supply because of the pandemic. It is one of the factors impacting this year’s HHD show.

During the 44 years that HHD has been in Grand Island, the number of technical innovations in farming that have been displayed at the show has been staggering. Even equipment that only half a decade ago was consider cutting edge is now commonplace. While there are still challenges in raising livestock and growing crops, technology continues to help farmers and ranchers produce more with less resources. And many of the innovations they are using were first seen at HHD.

One only needs to visit Harold Warp’s Pioneer Village in nearby Minden one day and then visit HHD the next day to comprehend the mind-blowing revolution and evolution of American agriculture in the past 150 years.

And visitors to this year’s HHD show will find the grounds in great shape, Jungmann said, as he credits Roger Luebe and his staff for making sure the grounds are in pristine conditions for visitors this year after a year’s absence and that the crops are in good shape for this year’s many demonstrations.

In 2017, HHD completed a $7.5 million renovation of its grounds, which is located on Husker Highway, west of Grand Island. The modernization added a new electrical infrastructure, paved roads, better drainage, better public communication system and much more. Several years ago, also, they did major work on their parking lot after a heavy rain event forced organizers to cancel one day of the three-day show due to sloppy parking conditions.

When opening day comes Tuesday, the grounds look like a small Nebraska town in the middle of corn and soybean country, full of people and activities.

Another unusual part of the HHD show is the live demonstrations of farm equipment in action harvesting crops. Jungmann said farmers get to see and test these modern marvels in action and ask questions of the vendors, which helps them make informed decisions about the kind of equipment their operation needs.

“They are drying down fast and will be ready by show time,” he said of the HHD crops planted this year.

And when it comes to equipment demonstrations, there will be a futuristic demonstration that is a sign of the things to come in the world of agricultural production and how technology is helping farmers and ranchers to better feed the world.

Jungmann said the Autonomy Showcase will provide a “hands off” demonstration experience that goes beyond auto-steering. At least two autonomous machines will be in operation each day of the show.

Raven will have on display the OMNiDRIVE, which helps eliminate the need for the driver in the tractor pulling the grain cart to unload the combine on the go, and the OMNiPOWER, which is a self-propelled power platform designed to easily interchange farm implements like a sprayer or spreader to do multiple tasks around the fields without a driver.

Another wonder, according to Jungmann, is just the fact that they are putting on a live show that will be 92% full despite the major challenges facing the agricultural world today, whether it be climate concerns, an ongoing pandemic, parts shortages, supply line difficulties or labor shortages.

“A year ago if you told me I was going to have 92% of the Husker Harvest Days, I would have taken that deal,” he said.

There is much, much more at HHD this year. To find out more about this year’s show, visit www.huskerharvestdays.com. or download the HHD app.

Jungmann said the mobile app can maximize the visitor’s time by planning your show schedule. Discounted show tickets can also be purchased online. Show hours start at 8 a.m. each day.

A large crowd makes its way along Central Avenue at the Husker Harvest Days site west of Grand Island in 2019. After a year off because of the pandemic, the three-day agriculture show returns to Grand Island starting Tuesday. (Independent/Barrett Stinson/file)

A forklift is used to unload a utility vehicle to be used by employees of Bayer Science during Husker Harvest Days, which starts Tuesday. Prep work at the site west of Grand Island started several days ago. (Independent/Josh Salmon)

Jeff Peters with T&L Irrigation hangs a sign outside its Husker Harvest Days location on Thursday. Prep for the event started several days ago. (Independent/Josh Salmon)