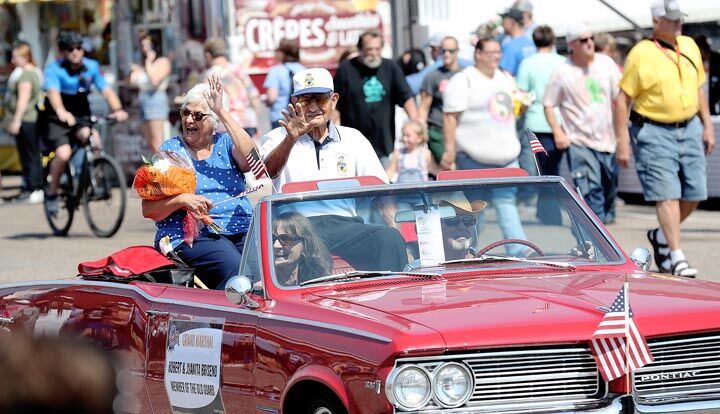 Robert and Juanita Briseno wave the crowd during the Veteran's parade at the Nebraska State Fair. Briseno was a co-grand marshal of the parade. (Independent/Josh Salmon) 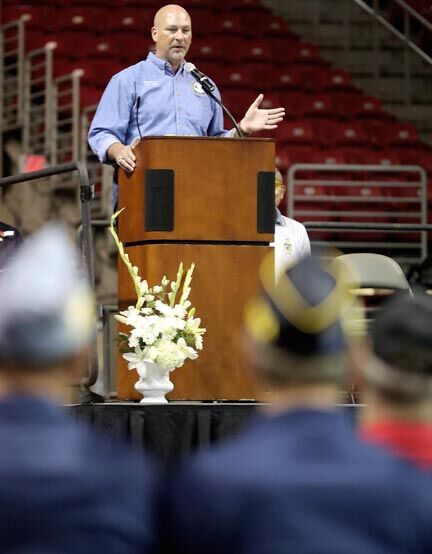 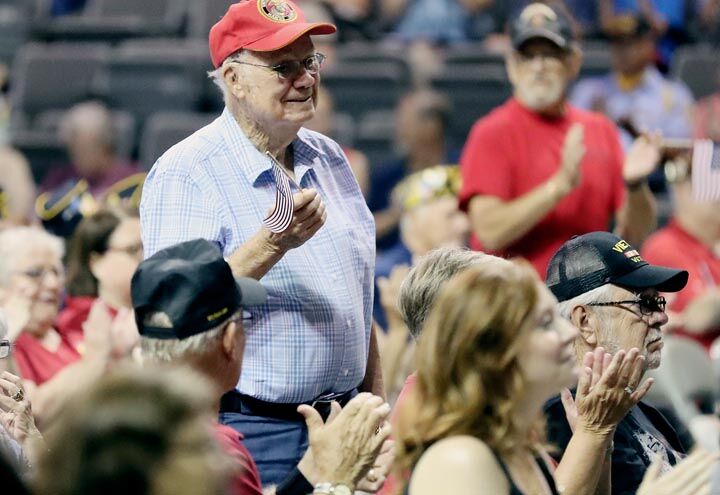 Dean Baumgart of Hastings stands and waves the flag while the Marines' Hymn is being played during the Nebraska State fair Veterans Day program at the Heartland Events Center Monday. (Independent/Josh Salmon) 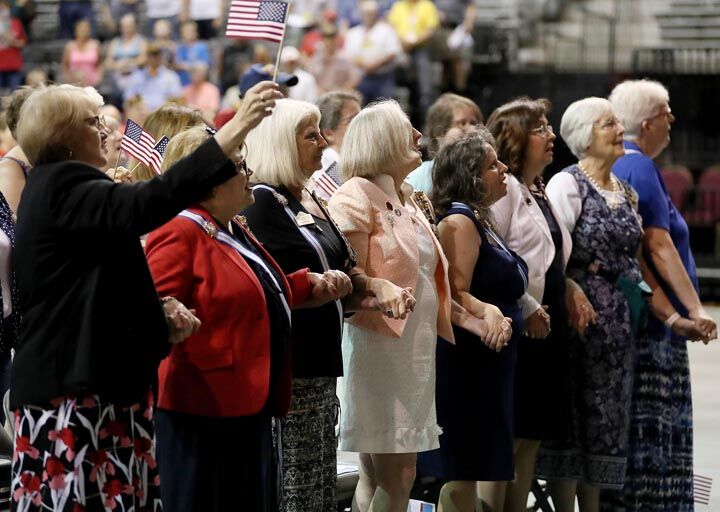 Some Veteran's and Daughters of the American Revolution gathered arm in arm during a song at the Veterans Day program at the Heartland Events Center Monday during the Nebraska State Fair. (Independent/Josh Salmon)

This year’s Veterans Day celebration was in recognition of the 100th anniversary of the Tomb of the Unknown Soldier at Arlington Cemetery.

The speaker was Sgt. Major (retired) Gavin McIlvenna, the 11th president of the Society of the Honor Guard, Tomb of the Unknown Solider. His address was made possible by the Daughters of the American Revolution.

On March 4, 1921, the Congress approved the burial of an unidentified American serviceman from World War I in the plaza of the new Memorial Amphitheater. On Nov. 11, 1921, the unknown soldier brought back from France was interred below a three-level marble tomb.

Also honored at the State Fair’s Veterans Day celebration was Robert Briseno of Wood River. He served as a member of the Old Guard from 1956 to 1958, when he was part of the 8th Company and Headquarters Company.

The 3rd U.S. Infantry, traditionally known as “The Old Guard,” is the oldest active-duty infantry unit in the Army, serving our nation since 1784. The Old Guard is the Army’s official ceremonial unit and escort to the president, and it also provides security for Washington, D.C., in times of national emergency or civil disturbance.

“It’s quite an honor that has been bestowed on me,” he said. “It is something I’ll remember the rest of my life. I wasn’t really expecting this.”

As a member of the Old Guard, Briseno was part of the second inauguration parade for President Dwight D. Eisenhower. He also served as an escort to Queen Elizabeth on her first trip to Washington, D.C., in 1957. He marched in the funeral procession for the World War II and Korean War Unknown Solider on Memorial Day in 1958.

He has been active in the Hall County Hero Flight program.

Briseno said being part of the Old Guard was a special time in his life.

“My eyes couldn’t open wide enough to take in what I was seeing,” he said. “So many soldiers that were the cream of the crop and I had the opportunity to serve with them. My pride and prestige was built so high in me while I was in that.”

Briseno said he was honored to share the stage at the Veterans Day ceremony Monday with McIlvenna.

McIlvenna retired from the U.S. Army after nearly 23 years of service with various peace and contingency operations in Northern Iraq, Bosnia, Baghdad and Africa.

During his service, he was the recipient of the Legion of Merit, Bronze Star, two Meritorious Service Medals and 22 other medals and decorations.

When he retired from the military in 2012, he joined the Oregon State Police.

During his address, McIlvenna talked about the importance of the Tomb of the Unknown Soldier to the nation.

He said it is not a monument to any war or conflict. On Dec. 21, 1920, Rep. Hamilton Fish III of New York introduced H.J. Resolution 426 in the 66th Congress, which provided for the return to the United States the remains of an unknown American soldier killed in France during World War I and for interment of his remains in a tomb to be constructed outside the newly constructed Memorial Amphitheater at Arlington National Cemetery in Arlington, Virginia.

Mcllvenna said at the time of Fish’s resolution, England and France already had such monuments dedicated to the services of an unknown soldier and to the common memories of all soldiers killed in war. He said the tomb is a place where the loved ones of those soldiers who did not return from the war can honor their memory, service and sacrifice to the nation.

He said the Army’s Third Infantry Regiment has been standing watch at the Tomb of Unknown Soldier since 1926. Along with soldiers from World War I, soldiers lost during World War II, Korea and Vietnam are honored there.

“The Tomb of the Unknown Soldier is the heart of Arlington and the soul of our nation right in that one location where we, as all Americans, regardless of our religion or politics or race, can come together and pay our respects to those who have served and sacrificed on behalf of others,” Mcllvenna said.

At the Veterans Day celebration, Ed Meedel was the program host, the Kearney VFW Post 759 posted the colors and retired the colors and Justin Kane provided the entertainment. A highlight of the program was the playing of the Armed Forces Medley during which veterans in the audience stood up to be recognized when the music from their branch of the service, Army, Navy, Coast Guard, Air Force and Marines, was played.

Also, when the veterans entered the Heartland Events Center, they were greeted by volunteers to honor their presence at the ceremony.

These robots are made from biological tissues and can self-replicate

These robots are made from biological tissues and can self-replicate

Robert and Juanita Briseno wave the crowd during the Veteran's parade at the Nebraska State Fair. Briseno was a co-grand marshal of the parade. (Independent/Josh Salmon)

Dean Baumgart of Hastings stands and waves the flag while the Marines' Hymn is being played during the Nebraska State fair Veterans Day program at the Heartland Events Center Monday. (Independent/Josh Salmon)

Some Veteran's and Daughters of the American Revolution gathered arm in arm during a song at the Veterans Day program at the Heartland Events Center Monday during the Nebraska State Fair. (Independent/Josh Salmon)