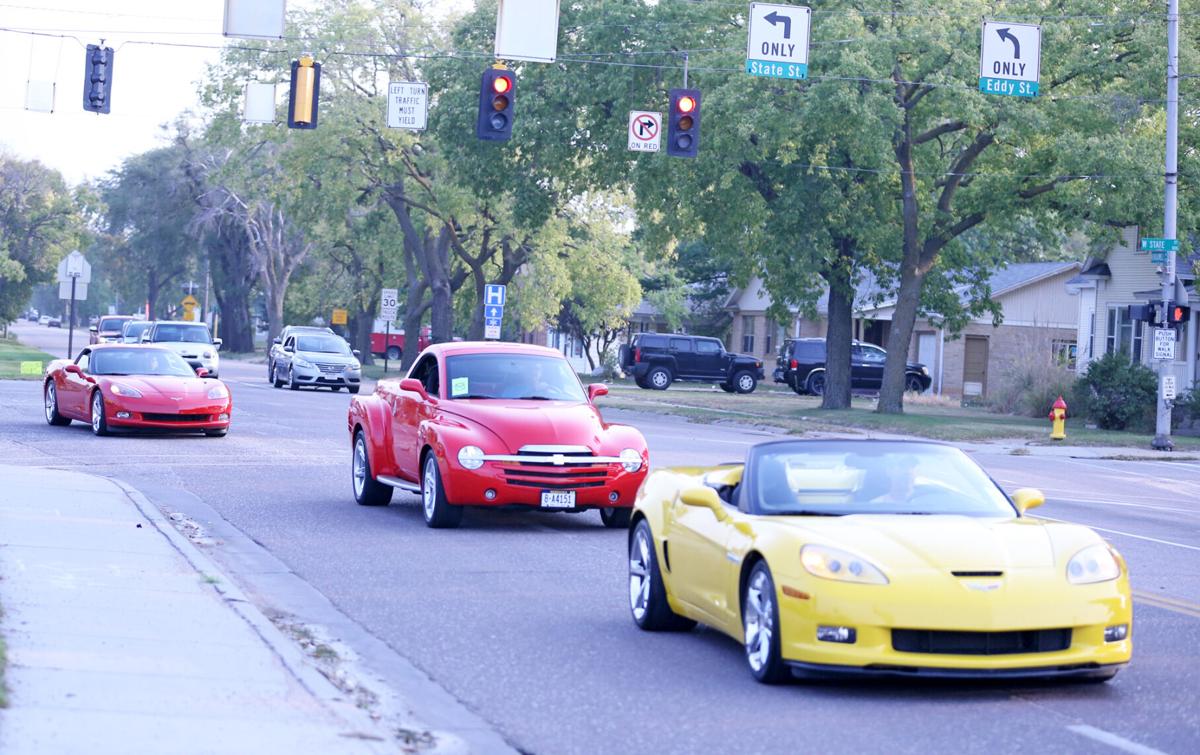 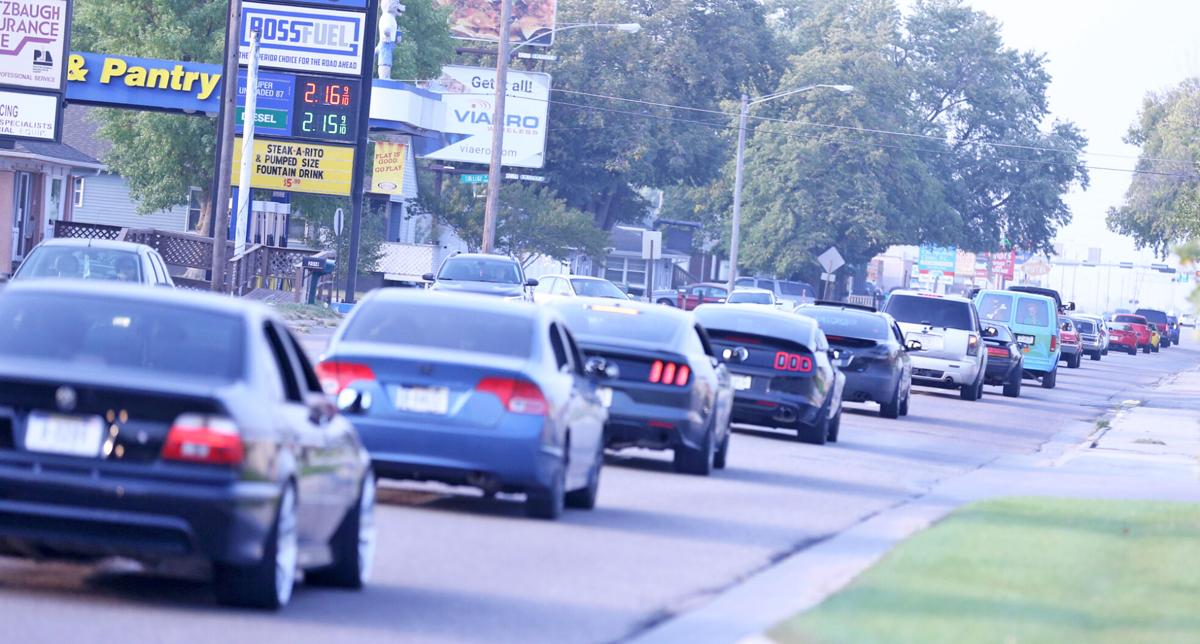 Cars line up along Broadwell Avenue as they make their way north from Five Points Sunday night as part of the Rumble on the Island mobile car show. (Independent/Austin Koeller) 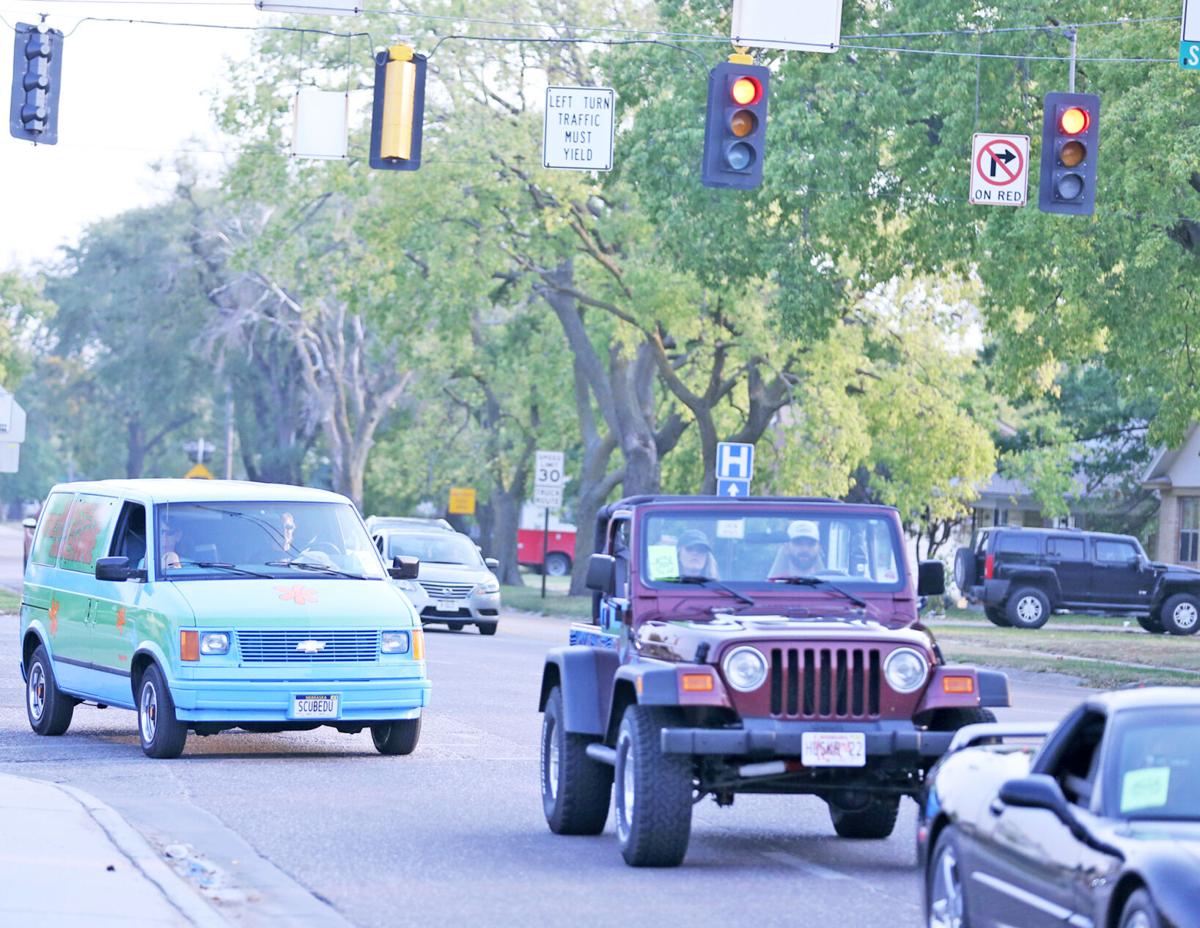 During the Rumble on the Island Cruise Night, sponsored by Edward’s Audio, 618 W. Third St., about 35 cars set up in the parking lot of Walmart North before making their way north on South Locust Street, before going down First, Sycamore, Third and Eddy streets and Five Points. From Five Points, the car show continued north on Broadwell Avenue before going down Webb Road, Second Street and Walnut Street before returning to Walmart South.

A Grand Island Police Department cruiser escorted the cars along the route. The show lasted about an hour.

Brian Bohrer, sales manager and co-owner of Edward’s Audio, said the business has held its Rumble on the Island in front of its Railside business for the past seven years. The event typically includes a car show and a sound pressure level competition — to see who has the loudest car stereo.

However, due to COVID-19, Bohrer said organizers needed to change the way the annual event was held this year.

“I didn’t really see any ideas that I followed out there,” he said. “I just said, ‘Let’s do something different instead of having everybody come out to our car show. Instead, we will bring the car show to you.’ With everything being up in the air about whether or not we should close the streets, we thought this was the best way to not have to plan all that.”

Bohrer said that with “carheads” working on their vehicles all summer and not being able to showcase them at many car shows due to COVID-19, he felt it was important for them to have a car show where they could showcase their vehicles. The mobile car show, he said, provided a safe way to do this.

“With a traditional car show, you are just sitting there,” Bohrer said.

“At least this way, people get to drive them. There are low-riders and have three-wheeled motors they are driving around and show it all off.”

Bohrer said people came from not only Grand Island, but also from across the area within a 40- to 50-mile radius.

Jake Horeis said he and his dad, Chris, both of Grand Island, had participated in Edward’s Audio’s car shows for “probably the past five years” and with COVID-19 canceling a number of car shows, they thought the mobile car show would be a good opportunity to get out and show their cars.

Jake said he drove his black BMW, while his dad showed off his gray 1975 Datsun 280Z that is “all original.”

“It is all original, but he (Jake) put new tires on it and did all the mechanical work,” Chris said. “He put in new injectors for me, too.”

Chris said he thought the mobile car show was “a good idea” and was glad he had the opportunity to participate in it.

“As long as you have the police escort, it is fine and makes everything go a lot smoother,” he said.

“It gets everyone more involved that way. Everyone gets to see the cars and its cool.”

Bohrer said the mobile car show may continue next year by being added as a cruise event following Edward’s Audio’s annual Rumble on the Island Car Show.

Cars line up along Broadwell Avenue as they make their way north from Five Points Sunday night as part of the Rumble on the Island mobile car show. (Independent/Austin Koeller)