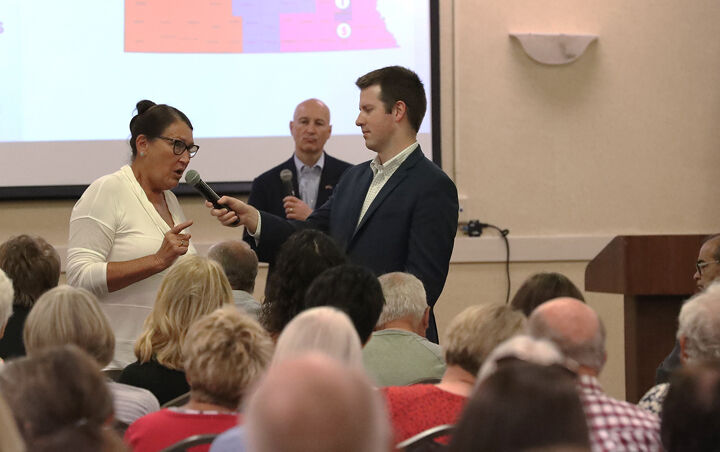 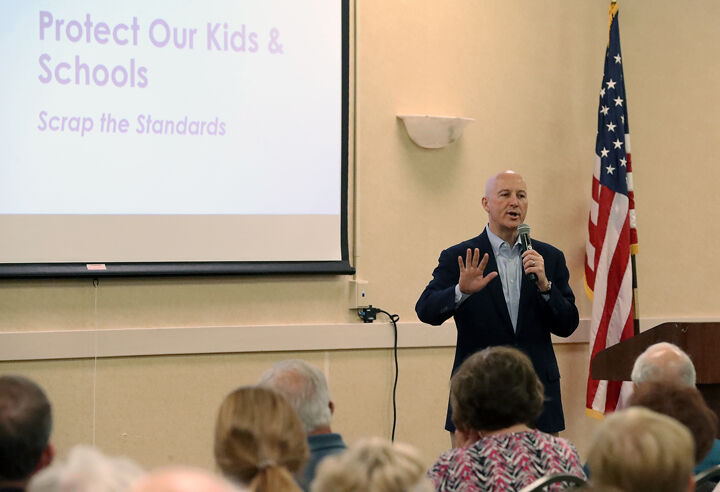 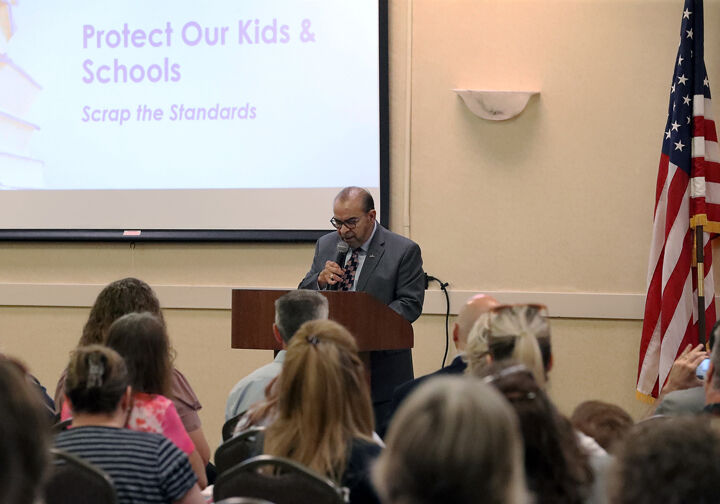 State Sen. Ray Aguilar of Grand Island speaks at a town hall meeting Thursday in opposition of the proposed state health education standards. There was a packed house in the conference room in the Midtown Ramada Inn. (Independent/Josh Salmon) 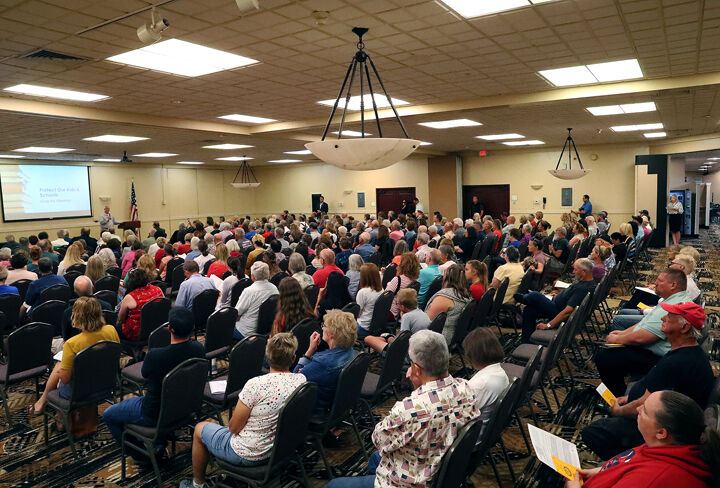 District 37 state Sen. John Lowe of Kearney speaks before a packed house Thursday morning at the Midtown Ramada Inn in Grand Island during a town hall meeting regarding the proposed state health education standards being considered by the Nebraska Board of Education. Sens. Ray Aguilar of Grand Island and Curt Friesen of Henderson were also on hand. (Independent/Josh Salmon).

At Ramada Midtown Conference Center in Grand Island, Ricketts voiced his opposition Thursday to a draft of the health education standards released in March by the state Department of Education, which will be considered for approval this fall by the Nebraska Board of Education.

Several people, including educators and state senators, at the town hall meeting expressed concerns about the age-appropriateness of the subject matter being proposed. There were a reporter-estimated 250 people at the meeting.

Such “political” and “non-scientific” topics should be left to parents, Ricketts argued.

“Parents are the people who are primarily responsible for a child’s education,” he said.

The content of the draft was informed by advocacy groups, such as Women’s Fund of Omaha and One Nebraska, and excluded mainstream groups, such as Nebraska Catholic Conference, which educates 10% of the state’s students.

“This isn’t about parents. This is about advocates,” Ricketts said. “They are trying to take parents out of the role of being the people primarily responsible for a child’s education, and put advocates in their place.”

The state Board of Education is not required by law to set sex ed standards, Ricketts said, and the Nebraska Legislature has declined to approve making it a part of the board’s responsibilities.

“They don’t have to do this. They can drop this entirely,” he said. “That is why I said, from the get-go, these sex education standards need to be scrapped.”

Ricketts encouraged everyone to read the preliminary draft of the Health Education Standards, which can be found at: cdn.education.ne.gov/wp-content/uploads/2021/03/Nebraska-Health-Education-Standards-DRAFT-1-Public-Input-_-with-colors.pdf.

“It was immediately clear to me that these (standards) are flawed,” Ekeler said. “The voices of Nebraska were not being heard. Parents were not being included. And because of that, we got a bad result.”

“There are many standards that are good there, that are about health, what we want our kids to know, but beginning in kindergarten, they’re introduced to various family structures,” she said. “Notably, the household with the traditional marriage, and a mom and a dad, are absent.”

“That does not represent our values,” she said. “Our kids belong to parents, not the Nebraska Department of Education.”

Greg Brown, a University of Nebraska at Kearney sports sciences professor, spoke as an educator on health sciences and a concerned Nebraskan.

He added, “It seems to me like they’re trying to indoctrinate our children in things that are diametrically opposed to conservative family values.”

State Sen. Ray Aguilar of Grand Island, who represents District 35 in the Nebraska Legislature, called for the standards to be scrapped.

“Although parts of these standards are common sense ... other parts go far beyond what we expect our teachers to address in the classroom,” Aguilar said. “I don’t think any of us will disagree that it’s important to teach kindergartners to properly wash their hands. But I think we’d all agree it isn’t appropriate to teach a fourth grader concepts of transgenderism.”

He added, “When we allow bureaucracy and activists to fill the void, they will push the limits of what we consider common sense and instead embrace the extremes of society.”

State Sen. John Lowe of Kearney, who represents District 37, spoke against teaching only about one-parent families and advocated for teaching celibacy.

“We need to teach (our young girls and boys) that right is right and wrong is wrong,” Lowe said, “and what is happening in our country right now is wrong.”

“It’s way above the kids’ level, of emotionally and mentally understanding it, and it’s not even accurate,” Roberts said. “It’s completely political and it’s not biological.”

Nita Lechner, who taught junior high-level sex education in Grand Island for 32 years, said she is “1,000% totally against” the proposed standards.

“They are developmentally inappropriate. It’s, to me, mass grooming, teaching our children that sex is OK,” Lechner said. “I think it’s great this is happening because this will wake parents up. It’s a great opportunity for parents to start interacting with their children on human growth and development.”

Jeremy Steele, a concerned parent, said that, on his farmer in Beaver Crossing, his children learn truths about biology, mating and reproduction.

“They’re seeing the natural reproduction and seeing the babies. Kids actually understand what’s going on,” Steele said. “In the classroom, you say, it’s OK if you have two dads or two moms — the kids will say, how are you ever going to get kids? Every person needs a male figure and female figure in their life because we’re different.”

The last time she received a child support payment from her son's father was in July 2020.

Jack Wilson will have to leave Regency Retirement by May 31

In addition to setting a date for Wilson’s departure, the lawyers agreed that neither party will seek attorney’s fees from the other.

The man was seen running stop signs, speeding, and passing numerous occupied vehicles and pedestrians in the turn lane.

Hall County in January 2020 had an unemployment rate of 5.2%. That number has been dropping steadily since, reaching 1.6% in September 2021.

State Sen. Ray Aguilar of Grand Island speaks at a town hall meeting Thursday in opposition of the proposed state health education standards. There was a packed house in the conference room in the Midtown Ramada Inn. (Independent/Josh Salmon)

District 37 state Sen. John Lowe of Kearney speaks before a packed house Thursday morning at the Midtown Ramada Inn in Grand Island during a town hall meeting regarding the proposed state health education standards being considered by the Nebraska Board of Education. Sens. Ray Aguilar of Grand Island and Curt Friesen of Henderson were also on hand. (Independent/Josh Salmon).