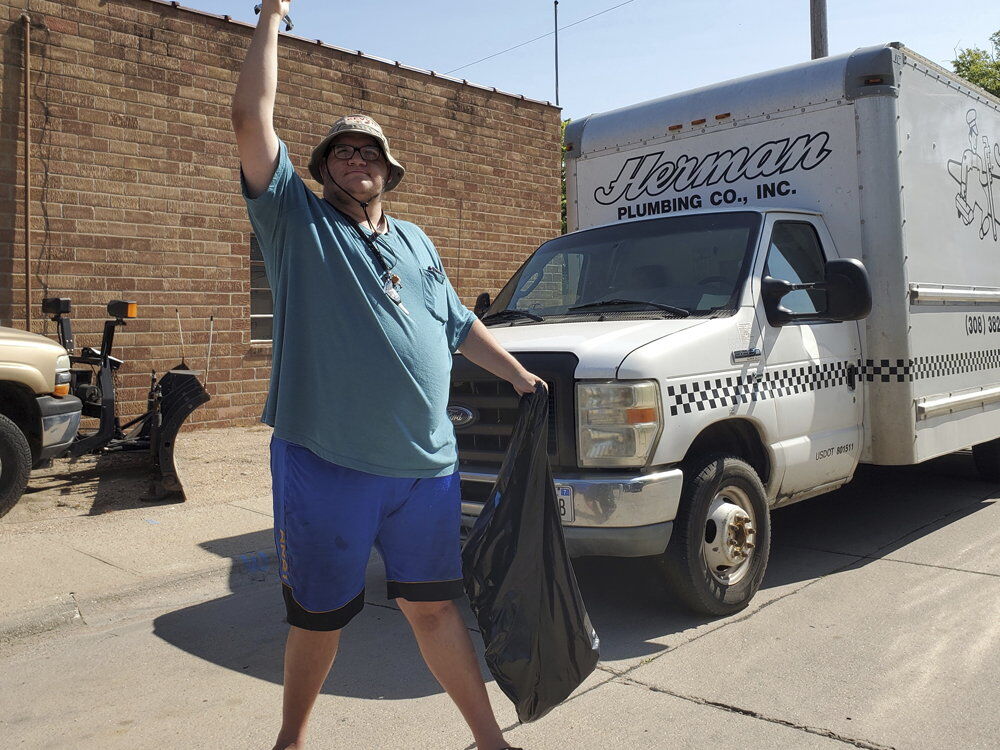 While “world domination” probably isn’t in Kevyn Hetrick’s future, judging by his best superhero pose and the bags and bags of litter he has picked up throughout Grand Island, he is still affecting the community. Hetrick has been the sole volunteer for his project, but has received support from his newfound friends at Herman Plumbing. (Independent/Jessica Votipka) 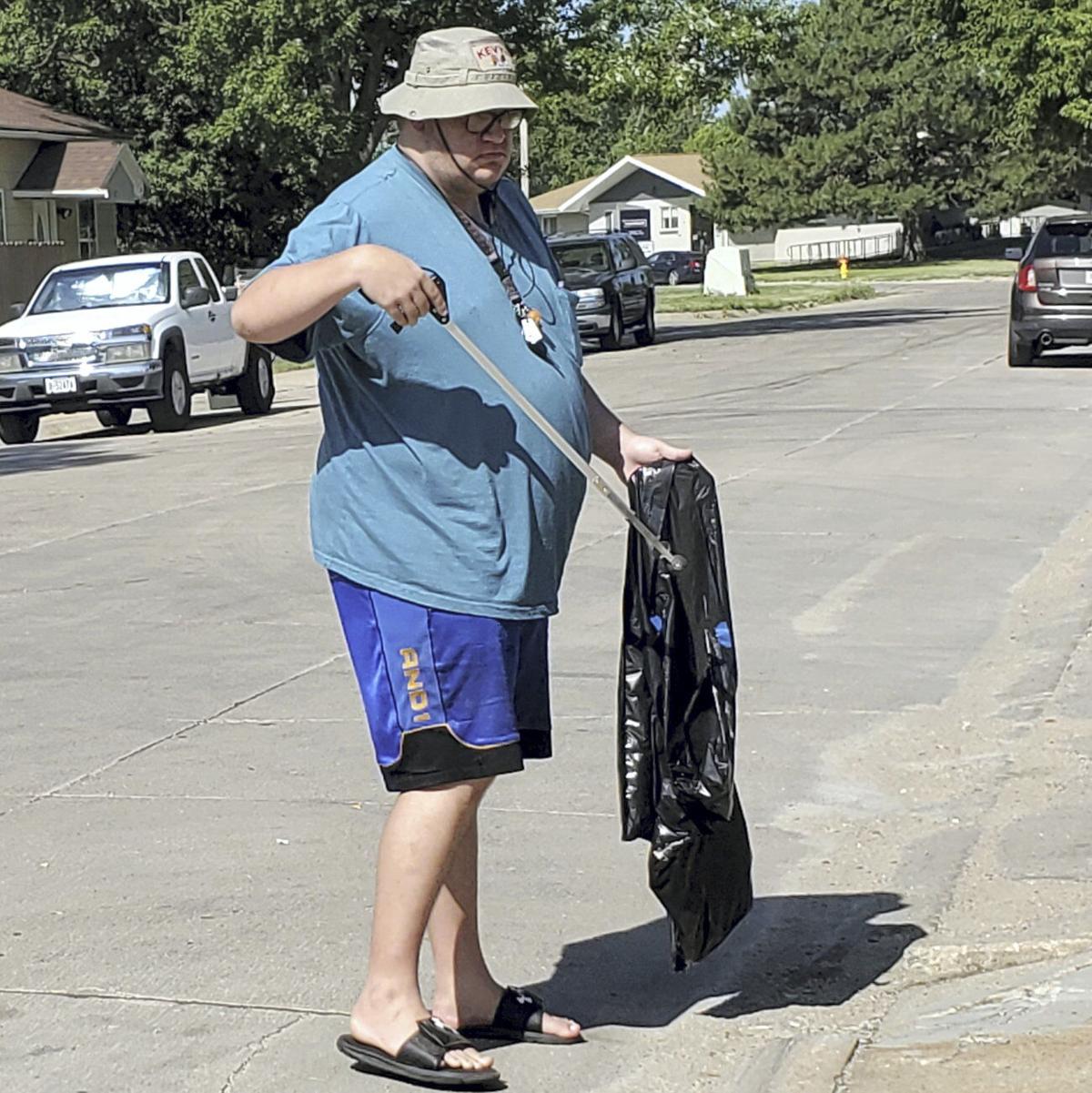 Kevyn Hetrick precisely picks up litter from a side street in Grand Island. Hetrick has created a volunteer project to make Grand Island — and someday maybe even Nebraska — a cleaner place. So far he has picked up garbage in Grand Island’s streets and parks solo, but says he hopes to get more volunteers. (Independent/Jessica Votipka)

Saying that, Hetrick was, of course, kidding.

He laughed and revealed his true purpose: “Keeping Nebraska clean,” Hetrick said, sizable black garbage bag in hand and long litter grabber in the other.

“By the end of the year I want to get the Tri-Cities as clean as possible,” he said. “Then in five years I want to make Nebraska a clean state.”

Picking up litter all over Nebraska is a lofty goal, and started with idle time in Grand Island, Hetrick said.

“I got bored — I literally got bored and started doing this for free,” he said.

Wednesday marked day five of Hetrick’s continuing endeavor in earnest. But he has pursued trash pickup on and off for about a year. Things haven’t seemed to even come close to boring — things amuse, even surprise Hetrick.

“I found a whole case of beer in the trees (at Ashley Park). Only one was unopened,” he said.

Mini plastic “shooter” bottles of hard alcohol are fairly common. Hetrick noted that Fireball seems to be a favorite in Grand Island.

“You’d think it would be cigarette butts, but I think I’ve picked up more plastic bottles and booze,” he said.

No matter the content of Hetrick’s sturdy plastic bags, he said he strives to get things as litter-free as possible. He recently received help from some found friends, Hetrick said.

“Herman Plumbing has been helping by giving me trash bags and gloves and all that good stuff,” he said.

Wednesday was sultry enough for a heat advisory, so Hetrick made a pit stop at Herman Plumbing. Besides cooling off in the business, he got to see his most ardent supporters.

Erin Harston is the manager at Herman Plumbing. Since the first day of his five-day trash pickup stretch, she has been supporting Hetrick.

“He’s out there and seems to be enjoying it,” Harston said. “Sometimes it’s hard for people to take care of their own property. He’s cleaning up all these areas of town that most people take for granted.”

Hetrick knows all too well the importance of being a good steward and helping others.

In 2018, Hetrick said, he got involved with the wrong crowd. A mistake he made clearly bothers him to this day. According to news reports from that time, it involved online friends who turned out to be anything but friends.

As he explained the situation, his head lowered and his happy, enthusiastic voice got a little softer.

Now 21-year-old Hetrick spent age 5 in foster care in Hastings (“I don’t really remember it very much”), but he said otherwise he has lived in Grand Island his entire life.

By all accounts, Hetrick has overcome.

Besides his citywide cleanup, he said he is a proud graduate of Grand Island Senior High Skills Academy.

Hetrick indicated he has spent a lot of time online. He has been streaming on the app Twitch since 2012, but the world of social media and sharing online has lost its luster.

“I’m very bored on the PC right now,” he said. However, he still takes time to curate his project’s Facebook page: Trashnsell.

“I happened to see him post on Facebook on the Grand Island Exchange,” she said of that Saturday. “He was cleaning up trash at Walmart. I saw on Sunday he was picking up trash again and posting on it. It’s not for community service or getting paid. I thought, ‘I need to do something. What can I do to help?’”

A glance at Trashnsell’s Facebook pages shows an active, popular account. Harston pointed out the nature of its traffic: “There are a lot of people commenting to him and recognizing him on Facebook,” she said.

Even so, Hetrick said he’d rather be making his way through Grand Island’s streets and parks, doing something for his hometown.

“Out here you see friendly faces and clean up the community,” he said.

Hetrick said he hopes to soon have a fleet of friendly faces supporting his goal to clean up Grand Island. He also mentioned finding a space to sort recyclables.

“I want to get volunteers, but I don’t know where to start,” he said, shrugging. “Just picking up a bag, grabbing a grabber from any store and start picking up trash.”

When Hetrick’s trash grabber broke Tuesday — likely from heavily repeated use — Harston made sure he got a replacement.

She and Herman Plumbing have made other contributions, she said.

“I got him a gift card to go to dinner. Then I thought, through Herman Plumbing we can provide him trash bags. We got him some gloves. Just things like that to help him continue to help the city of Grand Island.”

“If you want, support me in any way — even high fives,” Hetrick said.

“World domination” and a cleaner Nebraska — one high five at a time.

Kevyn Hetrick is searching for volunteers and resources to help make Grand Island a cleaner place. Find out how to help and get updates on Hetrick’s project on his Facebook page “TrashNSell.” https://www.facebook.com/TrashNSell

Contributions and supplies for Kevyn’s community cleanup can also be dropped off at Herman Plumbing, 904 N. Broadwell Ave.

Volunteers are needed for the annual citywide cleanup organized by Clean Community System.

Groups will be out around the town picking up litter from Aug. 9-22.

While “world domination” probably isn’t in Kevyn Hetrick’s future, judging by his best superhero pose and the bags and bags of litter he has picked up throughout Grand Island, he is still affecting the community. Hetrick has been the sole volunteer for his project, but has received support from his newfound friends at Herman Plumbing. (Independent/Jessica Votipka)

Kevyn Hetrick precisely picks up litter from a side street in Grand Island. Hetrick has created a volunteer project to make Grand Island — and someday maybe even Nebraska — a cleaner place. So far he has picked up garbage in Grand Island’s streets and parks solo, but says he hopes to get more volunteers. (Independent/Jessica Votipka)