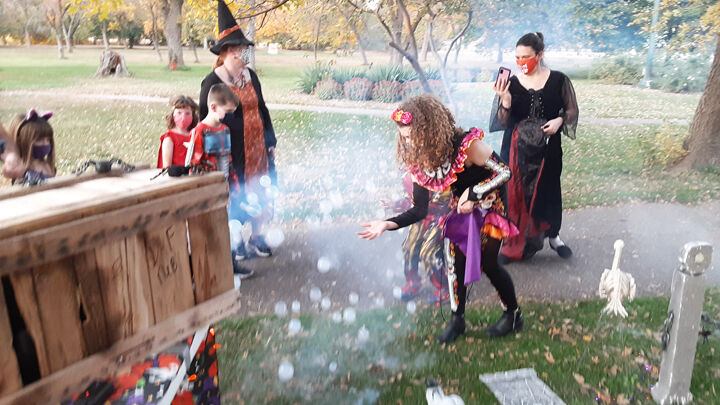 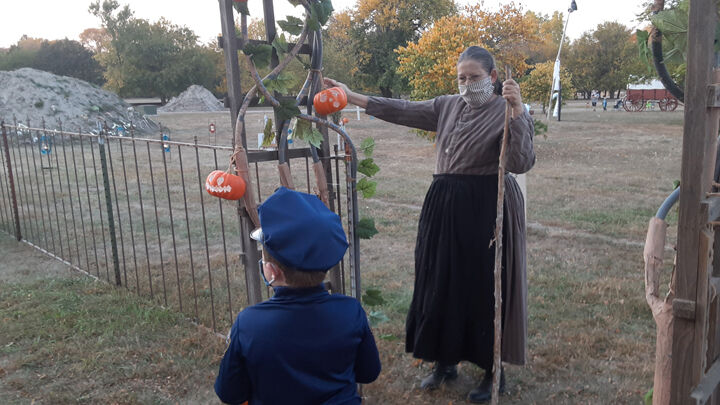 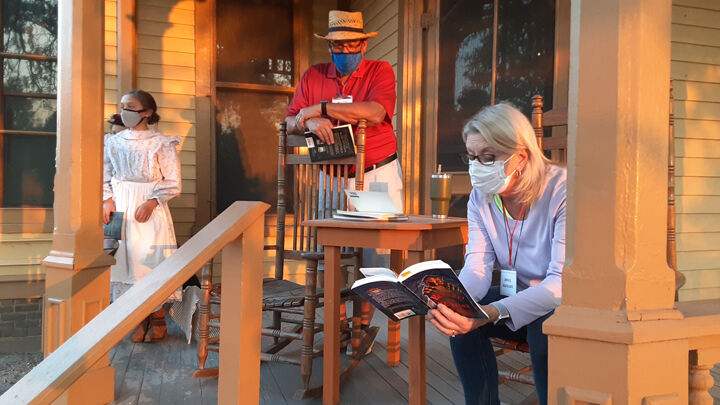 Donna Magnuson, right, joined by husband Steve Magnuson, reads selections from "Scary Stories to Tell in the Dark" to a rapt audience at Stuhr Museum's All Hallow's Eve. (Independent/Brandon Summers) 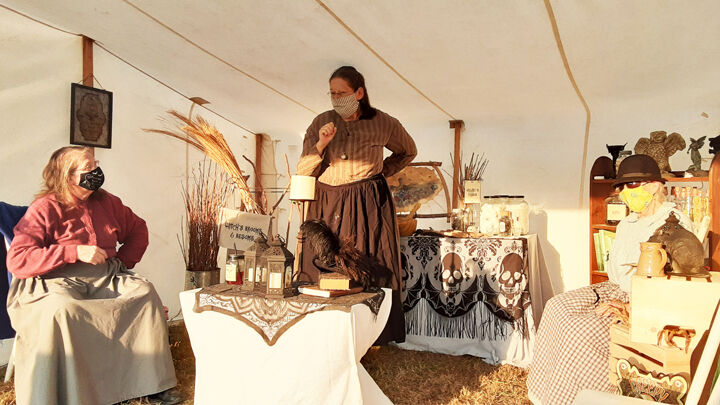 At the haunted field location of Brooms, Bats & Beyond, witchy hags Nancy Buettner, Sarah Back and Judi Nelson ready to sell a selection of brooms, brew and menace. (Independent/Brandon Summers) 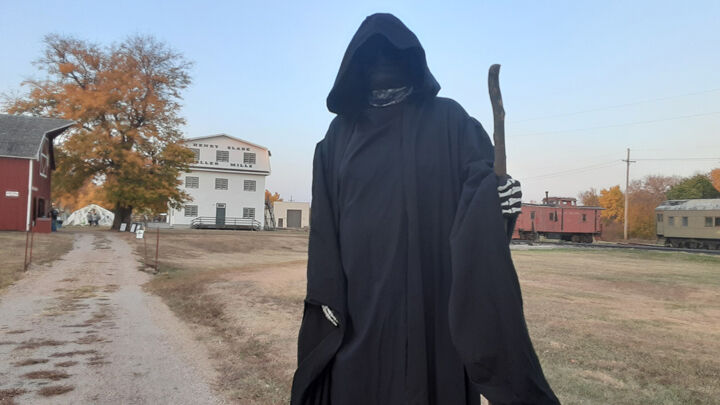 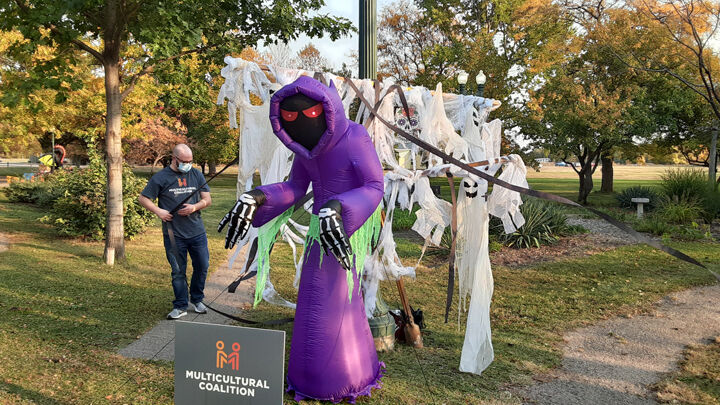 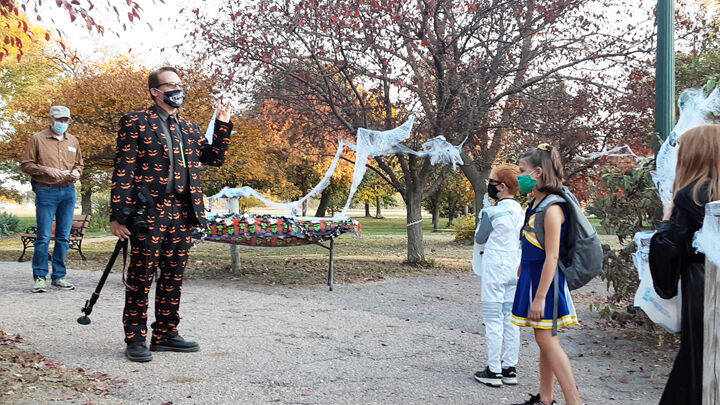 As darkness fell over the dusky grounds at Stuhr Museum, a trio of witchy hags set up their latest venture, called “Brooms, Bats & Beyond.”

“The bats get out and they go way out beyond,” said Nancy Buettner, in the role of hag. “We like to sell people our custom-made brooms, and part of that is we’d like them to go up and corral all the bats and bring them back.”

She added, “It depends on the year what our story is. We like to vary it.”

The trio also was excited to show off their new bubbling cauldron to arriving visitors.

“We needed a bigger one,” Buettner said. “Some of those children just didn’t fit in that little tiny one.”

The spectacle was only one feature of this year’s All Hallow’s Eve at Stuhr Museum, held Friday and Saturday.

Though it’s one of the museum’s most popular annual events, changes had to be made due to the pandemic, said Mike Bockoven, marketing director

Each evening was limited to 700 visitors. Tickets were purchased in advance.

“Usually we can do double that, maybe even triple that sometimes,” Bockoven said. “In consultation with the (Central District) Health Department, we figured 700 for the space we have is a reasonable number we would be able to keep relatively safe.”

The event was quickly sold out, which was not unexpected.

“The numbers that people have come out to this event, we thought we could fill 700 per night and we ended up doing it,” Bockoven said.

Guests first passed through a series of exhibits at the museum’s arbor.

“Normally, we do a treat trail where people can come and trick-or-treat, but we wanted to limit exposure of people handing stuff to people this year,” Bockoven said.

In its place, community agencies set up interactive scenes for the visitors.

The museum’s Railroad Town became a site of ghost stories and haunting figures.

Nearby, the “haunted field” was animated with spooky sights (a mermaid skeleton, dancing specters) and live actors.

“It’s not a haunted house, but it is a spooky field where things will happen,” Bockoven said. “It’s very Halloweenish, and it’s a lot of fun.”

Grand Island is not without its own haunted history.

The Witch’s Bridge, just outside of Grand Island, has become a place of legend.

“In some of the original stories, there are instances of an explosion and a baby falling off into the water, but I’ve been able to find no documentation on these stories,” said Kari Stofer, museum curator.

Such tales, though, are just that, Stofer explained.

“There’s a lot of stories about different areas around Grand Island and it’s simply mythology,” she said. “It’s just like some of the stuff surrounding cemeteries. There’s mythology about certain graves. But if you start digging deeper, sometimes you find out it’s not such a scary thing after all.”

Stofer added, “Unfortunately, they’re living on these websites in perpetuity.”

All Hallow’s Eve is a part of the museum’s mission, Bockoven said.

“I’m thrilled about it,” Hochstetler said. “It’s a lot of fun seeing the kids in their costumes. Especially this year, we don’t know how much trick or treating they’re going to get, so it’s just nice to see them out and about.”

Donna Magnuson, right, joined by husband Steve Magnuson, reads selections from "Scary Stories to Tell in the Dark" to a rapt audience at Stuhr Museum's All Hallow's Eve. (Independent/Brandon Summers)

At the haunted field location of Brooms, Bats & Beyond, witchy hags Nancy Buettner, Sarah Back and Judi Nelson ready to sell a selection of brooms, brew and menace. (Independent/Brandon Summers)