In honor of Independence Day, The Grand Island Independent is providing unlimited access to all of our content from June 28th-July 4th! Presented by Tom Dinsdale Automotive

Over and over again, Steve Sharp told the village clerk that she deserved a raise.

When Sharp was elected chairperson of the village board in 2010, Mary Terry had already worked as Cedar Creek’s village clerk and treasurer for nearly a decade. Terry controlled Cedar Creek’s finances, records, utilities and more.

“Her answer was always the same. It was always, ‘You can't afford to give me a raise,’” Sharp said.

“She was on the board longer than any of us were, so we came to trust her. We saw no reason not to,” Sharp said.

Terry started padding her paychecks with village funds in 2009. At first she took $100 a month, then gradually added more and more onto her hourly wage. “Once she knew she could get away with it, the amounts got bigger and bigger,” Sharp said.

Terry stole roughly $75,000 from the village of Cedar Creek over the course of six years, according to the Cass County Sheriff’s Office.

But Terry’s theft is important for another reason: It’s just one in a series of embezzlements that have repeatedly stung small Nebraska towns, a drumbeat of fraud that’s become almost routine.

In Nebraska, 14 city and village clerks have been charged for theft or violating public resources over the past decade.

Those clerks, plus another who took money but wasn’t charged, stole an estimated $1.7 million from 17 small towns across the state, according to audit reports and restitution orders.

And many more Nebraska small towns may be sitting ducks for future theft — or may not know they are already being targeted.

A whopping 158 towns in Nebraska have gone more than 20 years without a full financial audit, including four towns where former clerks were charged with theft, according to data collected by Flatwater Free Press from state audit records.

In almost every town where a clerk has been caught for fraud, audit reports have noted a lack of internal financial controls — essentially, not enough eyes on the cookie jar.

Ginger Neuhart took $265,000 from the communities of Alvo, Memphis and Ithaca — which have a combined population of 384. Neuhart embezzled the money while simultaneously working for all three eastern Nebraska towns.

Kimberly Neiman took at least $700,000 from the northeastern village of Pilger, according to audit reports — the most taken by any clerk in the last decade. She did so before and after two tornadoes devastated the tiny town.

“Every year, it seems like there's a clerk that gets caught for stealing. And that doesn't mean that every one of them gets prosecuted, either.” said Randy Peters of the League Association of Risk Management, the insurance pool that helped cover Cedar Creek’s losses.

While clerks acting as treasurers are legally required to complete continuing education classes through the state each year, there’s no such required training for people elected to a city or village board.

The lack of experience, training and oversight often means that village clerks are caught only after taking money for an extended period of time.

In Cedar Creek, Terry got caught because she got sick. A certified public accountant took over as her temporary replacement and noticed issues with the village finances.

For years, Terry had been paying herself more than what she listed on reports by signing, depositing and reporting her payroll, Sharp said. The village checks required two signatures to clear the bank. Terry signed once as village clerk. Then she signed again as treasurer.

“The bank wasn’t paying attention so they paid the checks,” Sharp said.

If a small town wants to avoid fraud, it should always require two distinct signatures on checks, Kubicek said. Towns with one employee depositing checks should have another employee or official review bank statements, Kubicek said.

“Where the problem lied was the fact that we trusted her,” Sharp said.

As trust between board members and a clerk builds, some of the fraud safeguards begin to deteriorate, according to Peters.

Six of the 14 clerks charged with theft in the last decade served their small town for 10 or more years. Two were named Outstanding Clerk of the Year by the Nebraska Municipal Clerks Association before their convictions.

Today, Sharp said the Cedar Creek board ensures dual signatures on all checks and has a different member review the village’s financial records every quarter.

In many small towns, there is little verification.

The clerk often understands how the financial systems work, while board members often don’t, Peters said.

​​”Sometimes, the thing that facilitates the crime in the first place is their knowledge,” Peters said. “It's not like taking $10 out of a cash register, some of these crimes are hundreds of thousands of dollars.”

In the last decade, four village clerks stole more than $100,000. In every case, they took it from a town with a population less than 1,000.

“I think the state's doing a good thing by requiring some additional education for treasurers. But without requiring trustees or city council members to have some training, I'm not sure you're accomplishing much,” Peters said.

Small Nebraska towns may also miss fraud because many avoid annual audits to save money. Even with yearly audits, fraud can go undetected.

Cedar Creek had an audit every year, including the years Terry was stealing from the village.

Audits are not designed to catch thieves but sometimes do reveal irregularities in a village's finances, Peters said.

The state requires all Nebraska cities, counties, towns and villages to perform annual audits. But most small towns can apply for a waiver each year. Audits can cost up to $10,000, which is why small town boards may frequently opt for a waiver, Kubicek said.

Before 2018, the state allowed audit waivers with minimal documentation. Now — after nearly two dozen instances of official fraud in the past decade — the state requires a small town to present board meeting minutes, bank statements and other financial details before a waiver is granted, Kubicek said.

“The thought is that if they think somebody's looking or going to look, then they'll be less likely to do something,” Kubicek said.

In Amy Allen’s decade-long career as Stapleton’s village clerk and treasurer, the village only underwent one audit, in 2012. The town received a second audit in 2018 – this time, because the village board had become aware of missing money. Allen was charged with taking $15,000. According to the state auditor’s report, she could have taken up to $38,000.

The woman who replaced her, current Stapleton clerk and treasurer Stacey Anderson, hoped that the small-town job would allow her time to enjoy her last years with children at home.

Instead, Anderson’s first year as clerk entailed creating a new financial reporting system, overseeing the utilities and handling the town’s day-to-day operations for $12 an hour. After three years, she now earns $20 an hour. That is still a ways off from the six-figure salary of Omaha’s city clerk.

“The office right here runs this village. … It was very hard coming in,” Anderson said. “I don't know that I would have taken this position had I known all the history here.”

Wendy McKain, the current president of the Nebraska Municipal Clerks Association, said clerks frequently feel underpaid and underappreciated. McKain works as the clerk and treasurer for the village of Trenton, a 516-person town in southwest Nebraska. As clerk, McKain keeps the village’s records, runs animal control and directs the village’s utilities.

There are 539 clerks in the state of Nebraska, McKain noted. The vast majority are doing their jobs admirably, she said.

Still, when it does happen, it causes real damage to towns like Stapleton.

“There are still people that are never going to trust this office again and I don't blame them,” Anderson said.

Although the majority of the $75,000 was returned to Cedar Creek through the League Association of Risk Management and court ordered payments by the former clerk, Sharp said the village is still missing some of what was taken.

Since Terry’s arrest, Cedar Creek has received updates to its flood infrastructure, roads and baseball field – changes Sharp said the theft could have delayed.

The $37,000 taken from Stapleton has been repaid through insurance and restitution payments by the former clerk. Anderson said some of it has gone toward decorations and playground equipment and that all of it would find its way back into the community it was taken from.

“I'm hoping that they see that we're putting it back into the village and I'm a different person,” Anderson said, “But that negative will never be forgotten, not in a small community.”

Man sentenced for sexually assaulting a child dies in prison

A man sentenced for sexually assaulting a child out of Hall County died at the Nebraska State Penitentiary.

Fortenberry sentenced to probation for lying to federal agents

Tuesday morning, a judge sentenced the 61-year-old former congressman to two years of probation on convictions that he lied to federal agents about dirty money.

A day after getting two years’ probation, community service and a $25,000 fine, former U.S. Rep. Jeff Fortenberry filed notice he will appeal his convictions and his sentence.

20 years after father's murder, sons continue to search for answers

Twenty years after their father's killing, Kevin Morse's sons are working to bring the case back into the public consciousness.

One person killed when tree falls on house in Lincoln, LFR says

Officials said the chimney had fallen through the house after being struck by the tree. The debris landed on a man inside.

Kearney is trying out the license plate reader cameras, making it the first Nebraska community to do so. The tech, viewed as valuable by law enforcement, has caused controversy elsewhere.

A Blair man pleaded guilty in U.S. District Court to threatening to kill a federal wildlife officer who was investigating him for poaching.

The investigation into the 20-year-old man started in May, when he began sending emails to district employees mentioning a specific administrator, according to police.

Two teens arrested in connection with 2021 slaying of Omaha man

Larry Thompson was sitting on his porch when he was shot. He was taken to the hospital, where he died. Seven shell casings were found at the shooting scene.

Ryan Long will tack close to another decade onto his stint in Tecumseh after a judge sentenced him to prison for shooting his then-girlfriend during a Halloween-night fight in 2019. 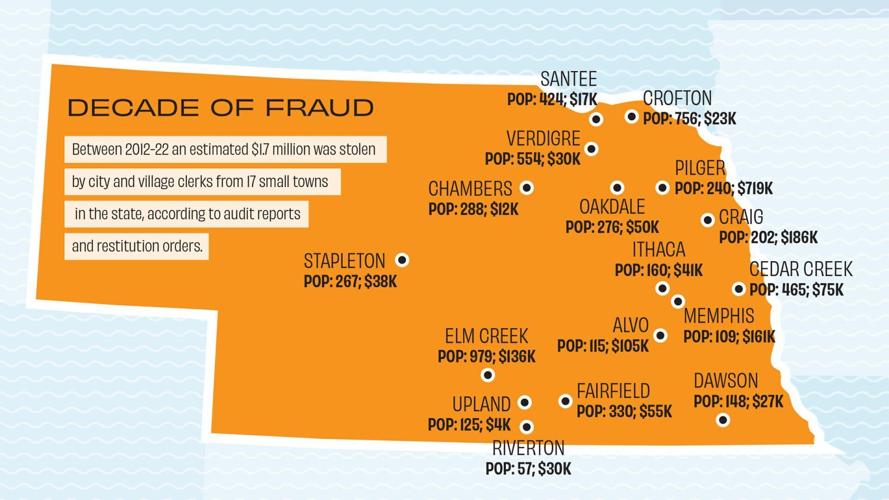 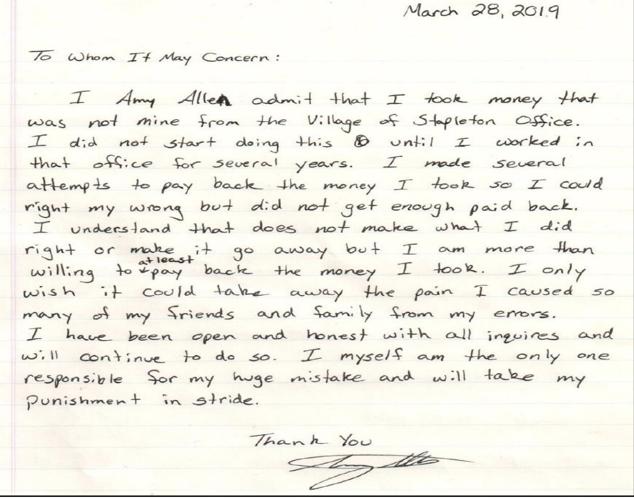 The apology letter that former Stapleton clerk Amy Allen wrote after it was discovered that she had stolen money from that small town. Allen was charged with taking $15,000. According to the state auditor’s report, she may have taken up to $38,000.