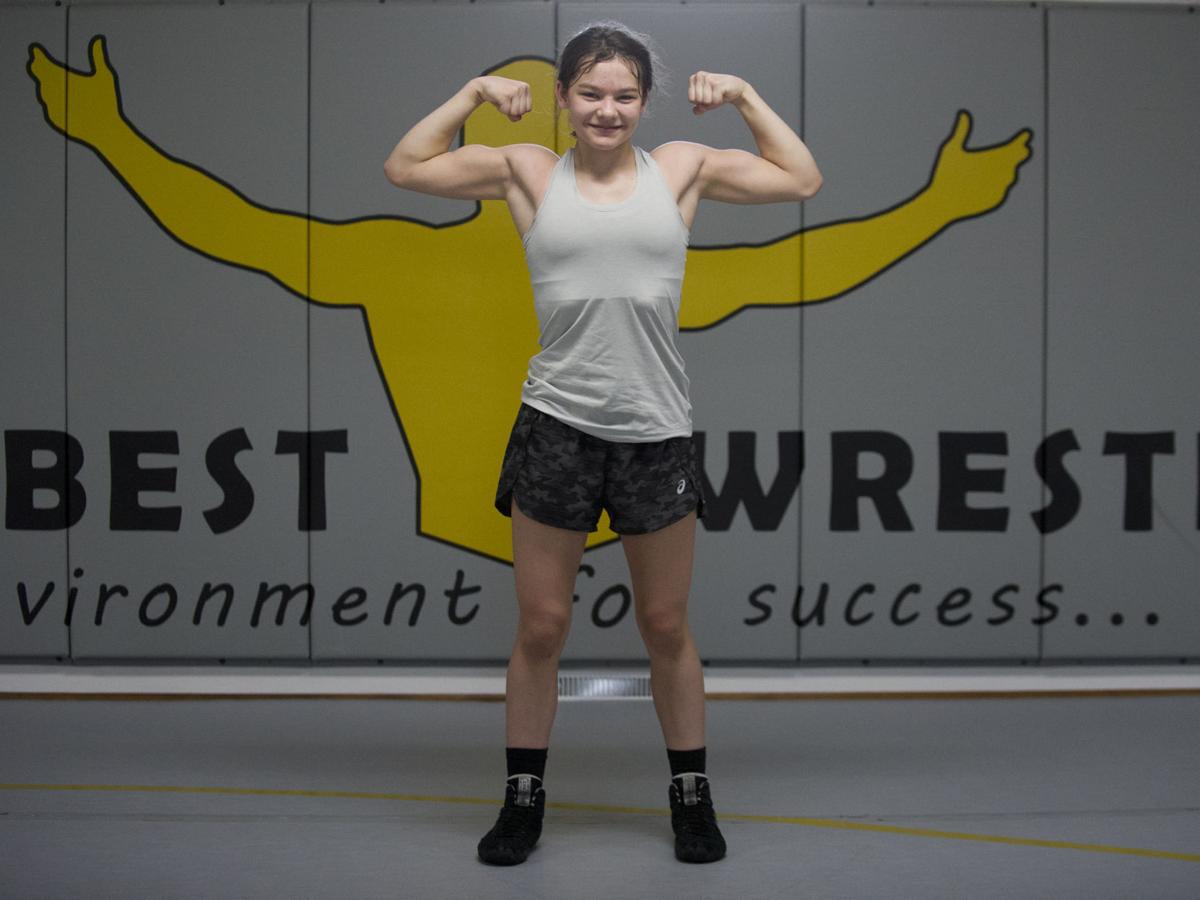 Fremont sixth grader Kaylyn Harril poses for a photo. She earned a spot on the Nebraska AAU state team. 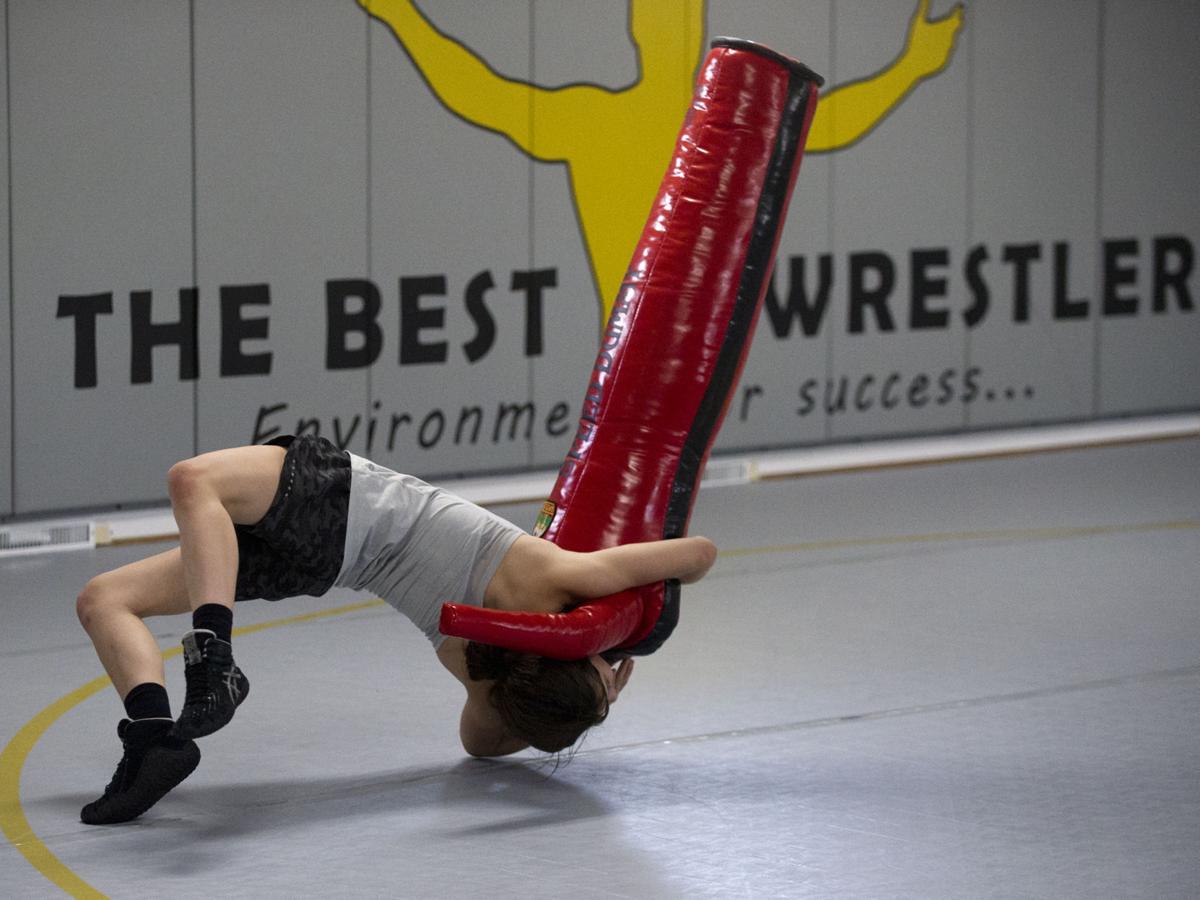 At the end of every wrestling practice, Kaylyn Harrill finds a practice dummy to toss around.

Over and over, the inanimate training partner soars high into the air before crashing back down to the mat as the Fremont-area sixth-grader bends over backward to ensure its shoulders land squarely on the mat.

The reasoning is simple.

“I want to be able to do that move in that match and nobody else is working hard, so I might as well,” Kaylyn said.

At 12 years old, Harrill may be one of best girl wrestlers in the state before wrestling at the high school level.

In the past year alone, she has become a high school All-American and national champion while earning a spot on the Nebraska AAU High School National team, which will compete at the prestigious Disney Scholastic Wrestling duals this summer.

Kaylyn was introduced to the sport at just 4 years old.

Growing up in Creighton, Nebraska, there were not many options for athletic pursuits, and with her older-brother-by-a-year Tyler signing up to wrestle, Kaylyn wanted to give the sport a try.

“My parents were like, yeah, you can try it but we aren’t going to buy you any shoes or anything in case you quit because they didn’t think I’d like it,” Kaylyn said.

Eight years later and enough medals to overflow the trophy case, both Kaylyn and Tyler are still going strong on the mat.

“She has always loved it, but this past year, she has really come into her own as a wrestler,” Kim Harrill, Kaylyn’s mother, said.

It helps when Kaylyn’s favorite part is “getting my hand raised at the end of the matches,” and she has done that a lot lately.

She also had a third-place finish at the Tulsa Kick-Off tournament.

The growth coincides with joining a new gym — The Best Wrestler just outside of Council Bluffs.

“I’ve learned so much since I’ve switched,” Kaylyn said.

The gym, which opened in August, clocks in at just over an hour away from Fremont, making for long morning and evening commutes because they practice five days a week.

Kaylyn’s rise also matches the projection of girls wrestling as a sport nation-wide with Nebraska High Schools offering the sport for the past two years and the NSAA nearing a vote to possibly sanction it.

“It’s been pretty awesome,” Kaylyn said. “There used to barely be any girls and now we can have full girl divisions, full brackets and everything.”

This summer as a sixth-grader on a team for high schoolers, Kaylyn will represent Nebraska in Florida as part of the AAU High School National team.

Approval by the city and the Nebraska Racing and Gaming Commission would allow the track’s developers to pursue casino gambling there.

Since Legislative Bill 650 was passed last month, multiple companies have announced plans to contract with Nebraska ethanol producers to capture their carbon dioxide before it enters the atmosphere.

The discovery of a species of kissing bug in Nebraska has prompted state and University of Nebraska officials to alert the public to the risks posed by the bugs.

Delilah Poole has just upped the ante on the typical lemonade stand. And she made over $100.

His hand-cut firepits feature intricate silhouettes of wildlife and farm scenery. For propane firepits, Shawn Racicky has even created pits with steel logs that look like the real thing with flames flickering around them.

Rescue of river otter is a sign of growing population

The once-threatened species is doing so well in Nebraska that the Game and Parks Commission will consider a hunting season at its Friday meeting in Chadron. What do you think?

Patrice McCabe aims to show RV travelers the treasures of Nebraska they can’t see from the interstate in the pilot episode of a new Discovery Channel series titled "RV There Yet?"

The Hubbard Gorilla Valley is undergoing a $7 million project, partly a face-lift and partly an enhancement for the animals, and remains closed until July, as does the Orangutan Forest, the Elevator Building and the Simmons Aviary.

Nebraska currently has no state health standards. The controversial proposed standards, if approved after an impending revision, would only be recommended for adoption by local districts.

A labor of love: Bringing Friend's Opera House back to life

Longtime efforts to renovate a second-story Opera House in Friend, retaining a piece of history and creating a new community gathering place, have gained momentum.

Fremont sixth grader Kaylyn Harril poses for a photo. She earned a spot on the Nebraska AAU state team.