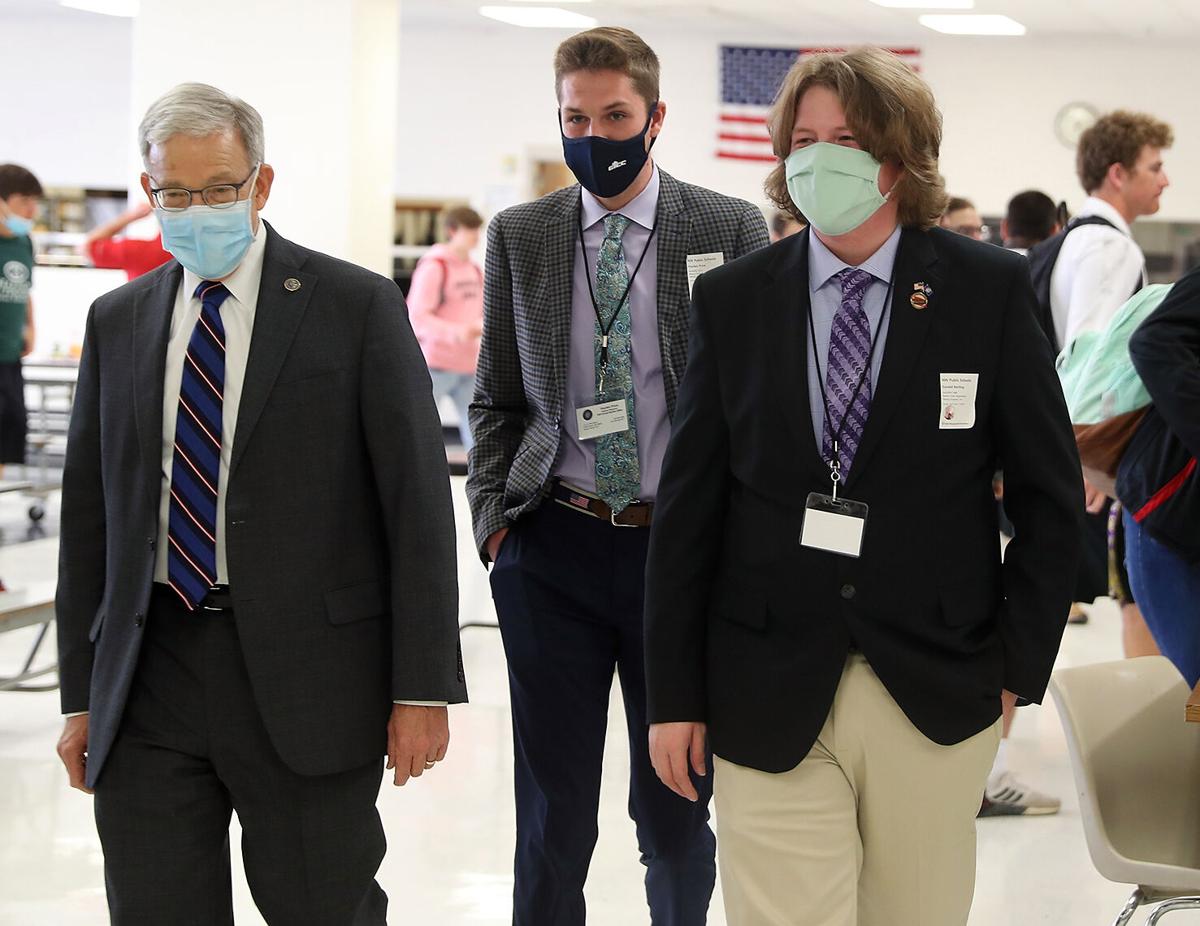 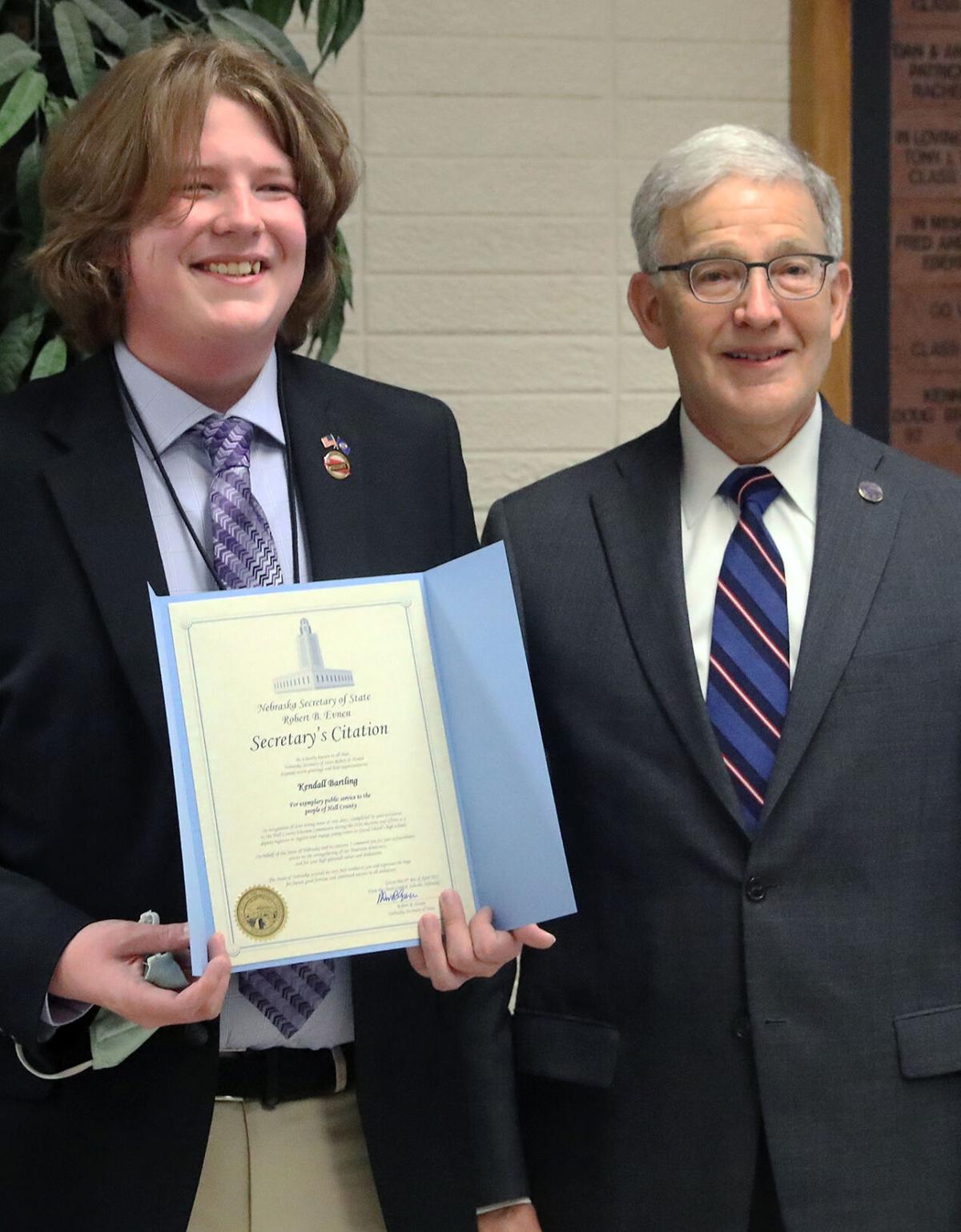 Kendall Bartling, a senior at Grand Island High School, received a special award Tuesday, April 6, 2021, from Nebraska Secretary of State Robert Evnen for his voter registration efforts. Bartling is a deputy registrar and was presented the award at Northwest High School, where he was encouraging and signing up students to vote. (Independent/Josh Salmon) 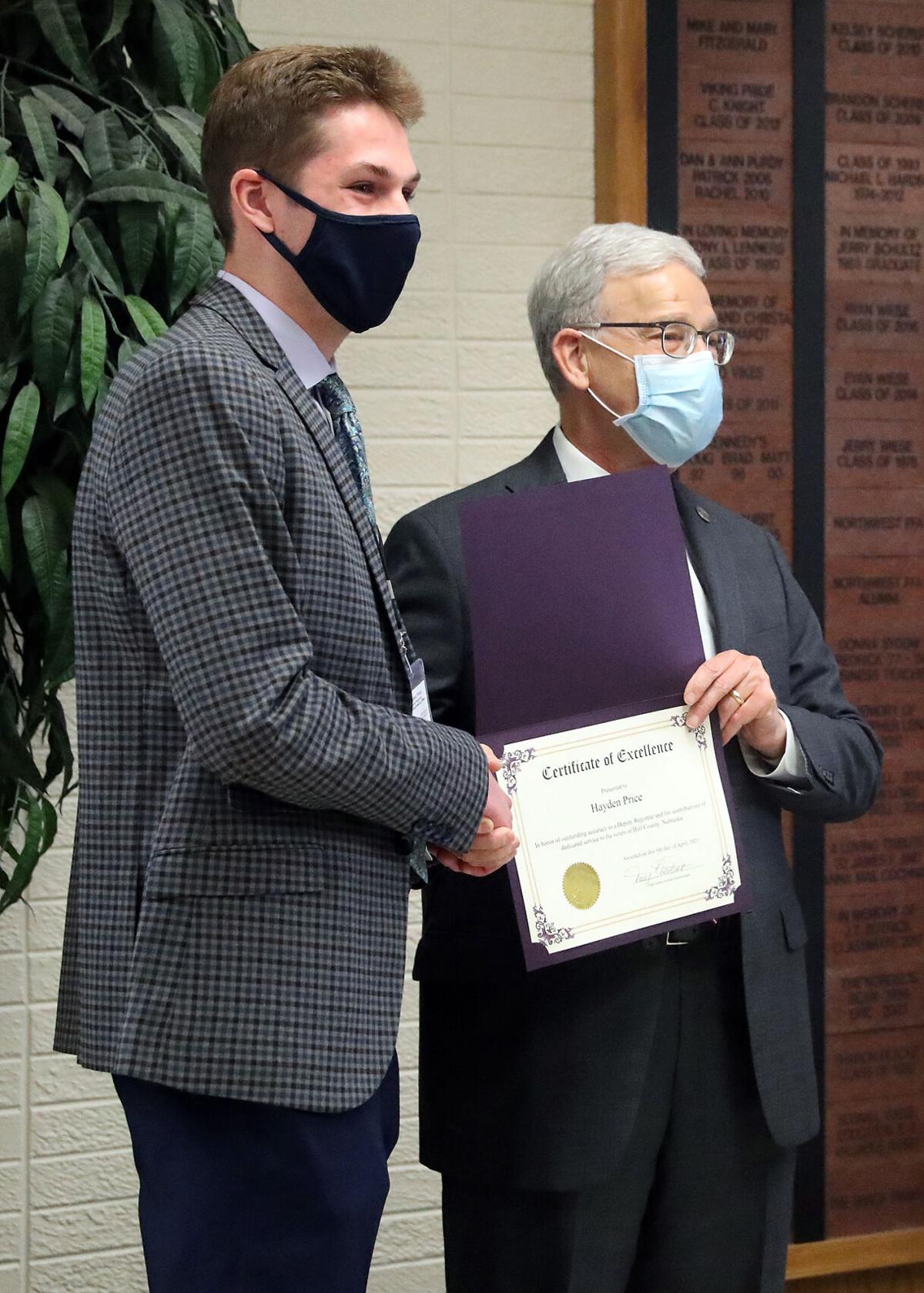 Hayden Price, a senior at Grand Island Central Catholic, received a certificate of excellence Tuesday, April 6, 2021, from Nebraska Secretary of State Robert Evnen for his work in becoming a deputy registrar. The ceremony was at Northwest High School. (Independent/Josh Salmon)

He has held three drives this year for students and staff at GISH, Central Catholic and, on Tuesday, at Northwest High School.

Evnen visited the Northwest event and honored Bartling, along with Central Catholic student Hayden Price, who also was helping students register, for their efforts.

He awarded each a certificate of excellence.

Bartling received a special citation from Evnen and the Office of the Nebraska Secretary of State for his efforts and dedication “for exemplary public service to the people of Hall County” and “in recognition of your strong sense of civic duty,” and his efforts as a deputy registrar to engage young voters.

“On behalf of the state of Nebraska and its citizens, I commend you for your extraordinary service to strengthening the American democracy,” Evnen said, “and for your high personal values and dedication.”

He noted this is the first such honor given by the Nebraska secretary of state’s office.

Evnen said many people across the country were discouraged about elections and the election process, but he was not “because we have young people like these who have taken up the baton, and understand the importance of elections in maintaining a representative democracy.”

Bartling said civic engagement is “very important at a youth level,” and he has advocated for every student in Nebraska to have the opportunity to register to vote at school.

Bartling said he always has been civic-minded.

“I haven’t been able to vote yet, and 2022 will be the first election when I can, but all the way back in 2018 I was able to register voters and get them their voice in politics,” he said. “It’s so fulfilling to know that students, even if I don’t have that same voice, they’re able to exercise it thanks to the work I’m putting in.”

A student voter registration event in March at GISH broke Hall County records for most voters registered at a single event, with a total of 34.

A Central Catholic event that yielded 10 new voters had 100% accuracy for registrations, also a first for Hall County.

On Tuesday, 12 new voters were registered.

Tracy Overstreet, Hall County election commissioner, applauded the work being led by Bartling with the help of fellow students.

While schools ready students for college, students need to be ready to be members of the community, as well.

“This type of event gets them ready for the community,” Overstreet said. “One of the big things of entering that adult world is sharing your voice with your government, and to do that you have to be a registered voter.”

Amazon appears to have votes to block union effort

Stacey Abrams on voting rights, her next move

Stacey Abrams on voting rights, her next move

MINNEAPOLIS (AP) — Officer Derek Chauvin had his knee on George Floyd’s neck area — and was bearing down with most of his weight — the entire 9 1/2 minutes the Black man lay facedown with his hands cuffed behind his back, a use-of-force expert testified Wednesday at Chauvin’s murder trial.

Matthew Stephens of St. Paul, who was arrested after planning to kill his ex-wife, was sentenced in February to 20 to 30 years in prison.

City of Grand Island could be switching from coal to natural gas as its source for electric power generation.

The gunman who killed five people including a prominent doctor in South Carolina was former NFL player Phillip Adams, who killed himself early Thursday, according to a source who was briefed on the investigation.

Two arrested while fleeing from police

In setting salaries, local employers pay attention to the competition

In a time of employee shortages, employers are making adjustments in their recruiting efforts.

Kendall Bartling, a senior at Grand Island High School, received a special award Tuesday, April 6, 2021, from Nebraska Secretary of State Robert Evnen for his voter registration efforts. Bartling is a deputy registrar and was presented the award at Northwest High School, where he was encouraging and signing up students to vote. (Independent/Josh Salmon)

Hayden Price, a senior at Grand Island Central Catholic, received a certificate of excellence Tuesday, April 6, 2021, from Nebraska Secretary of State Robert Evnen for his work in becoming a deputy registrar. The ceremony was at Northwest High School. (Independent/Josh Salmon)