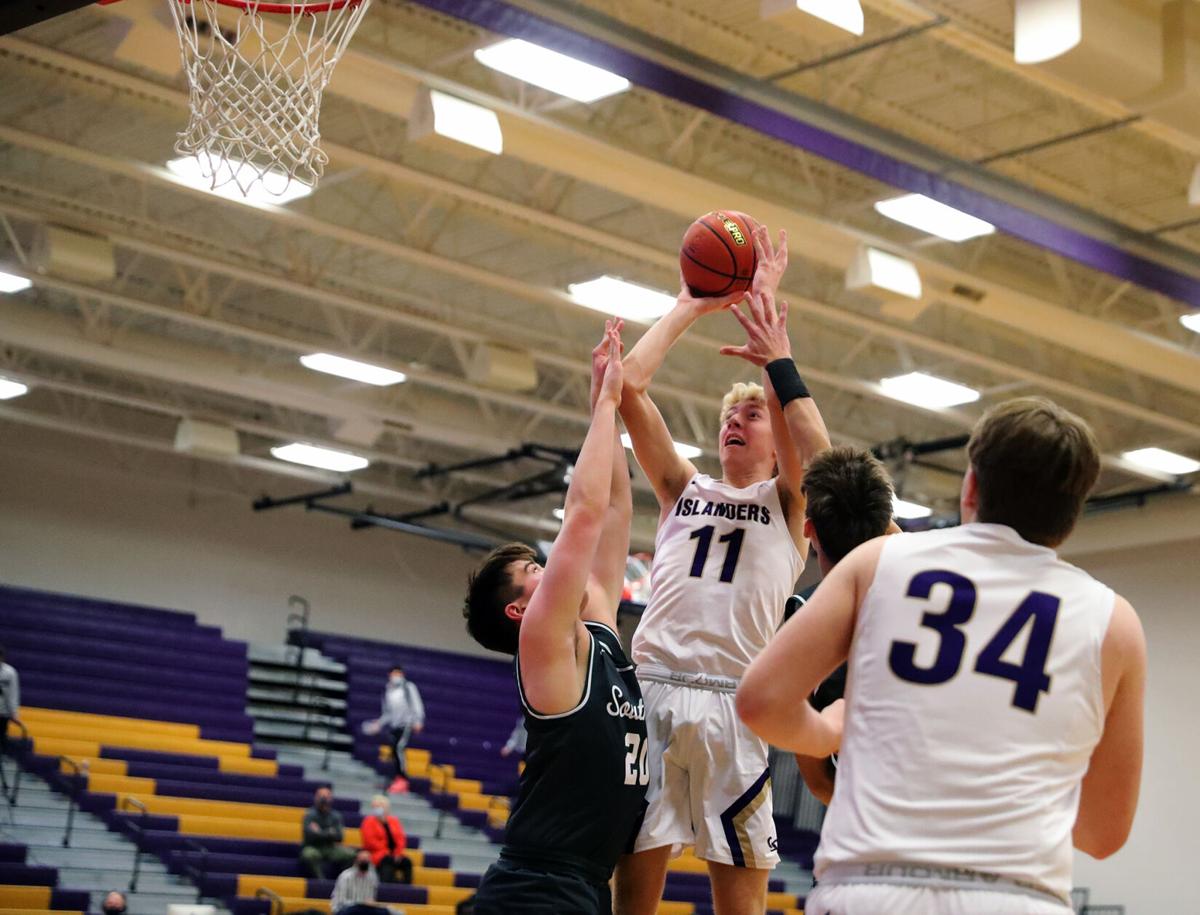 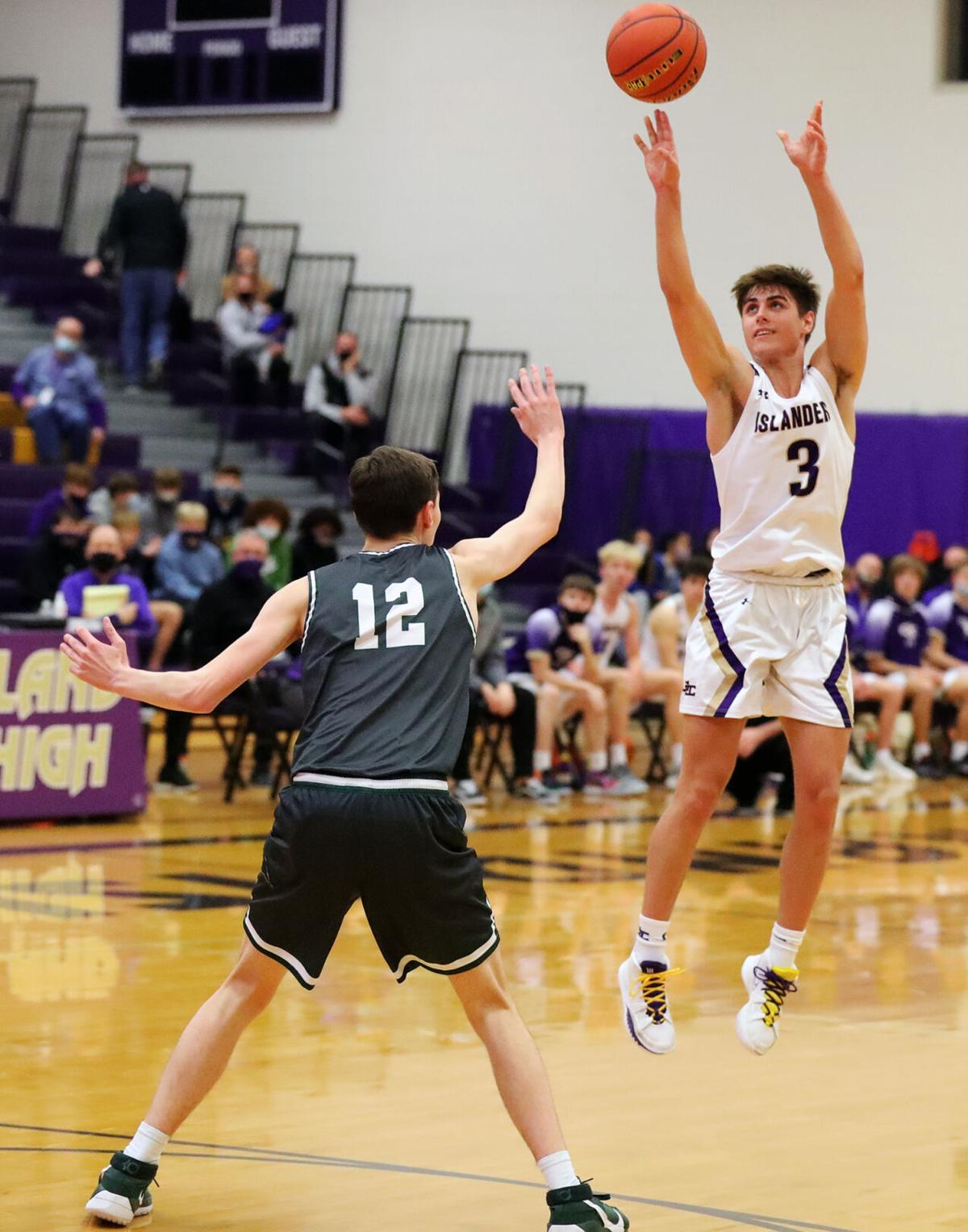 GISH senior Aiden Klemme shoots a long 3-pointer in the second half of their 45-40 win over Lincoln Southwest. (Independent/Josh Salmon) 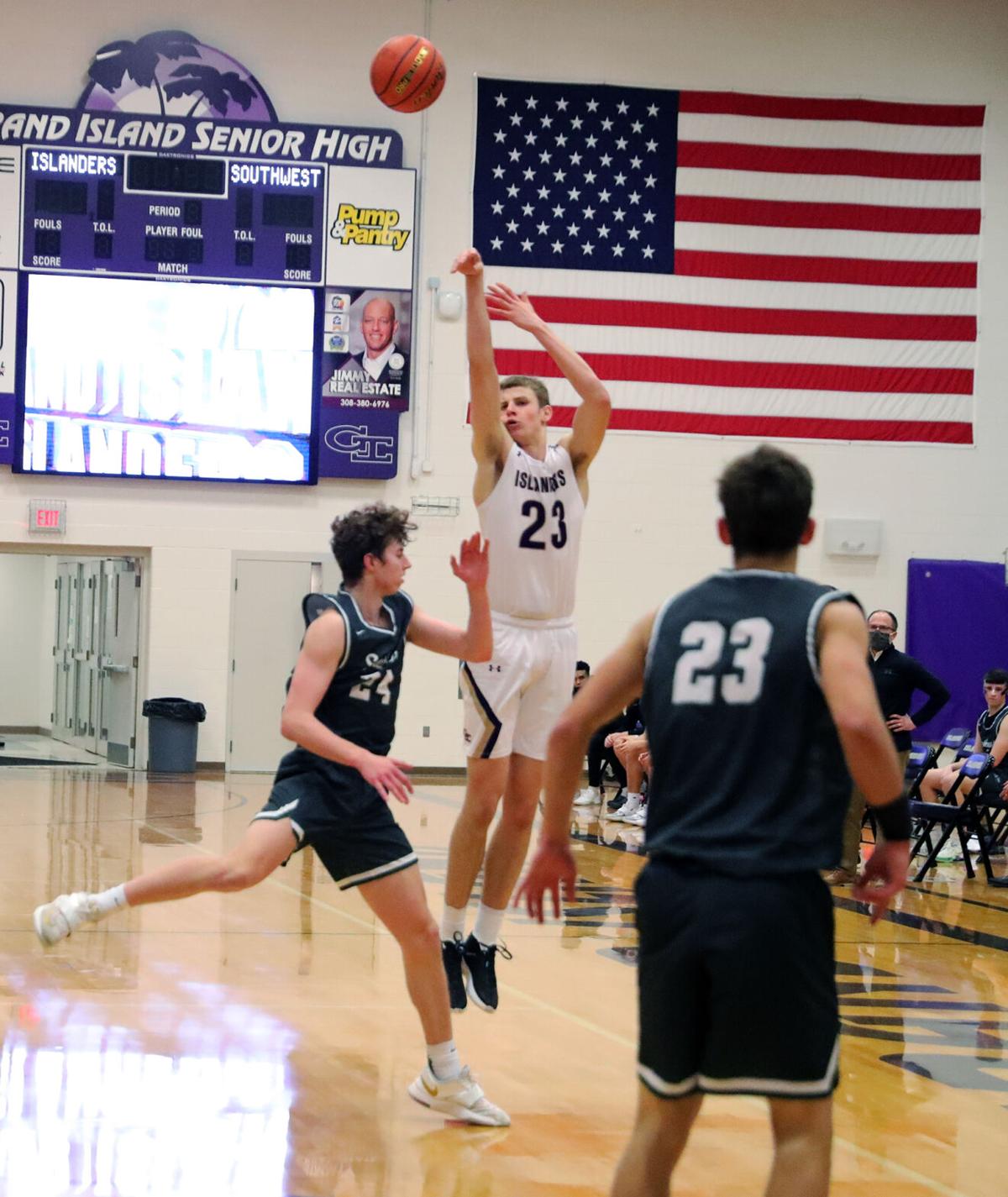 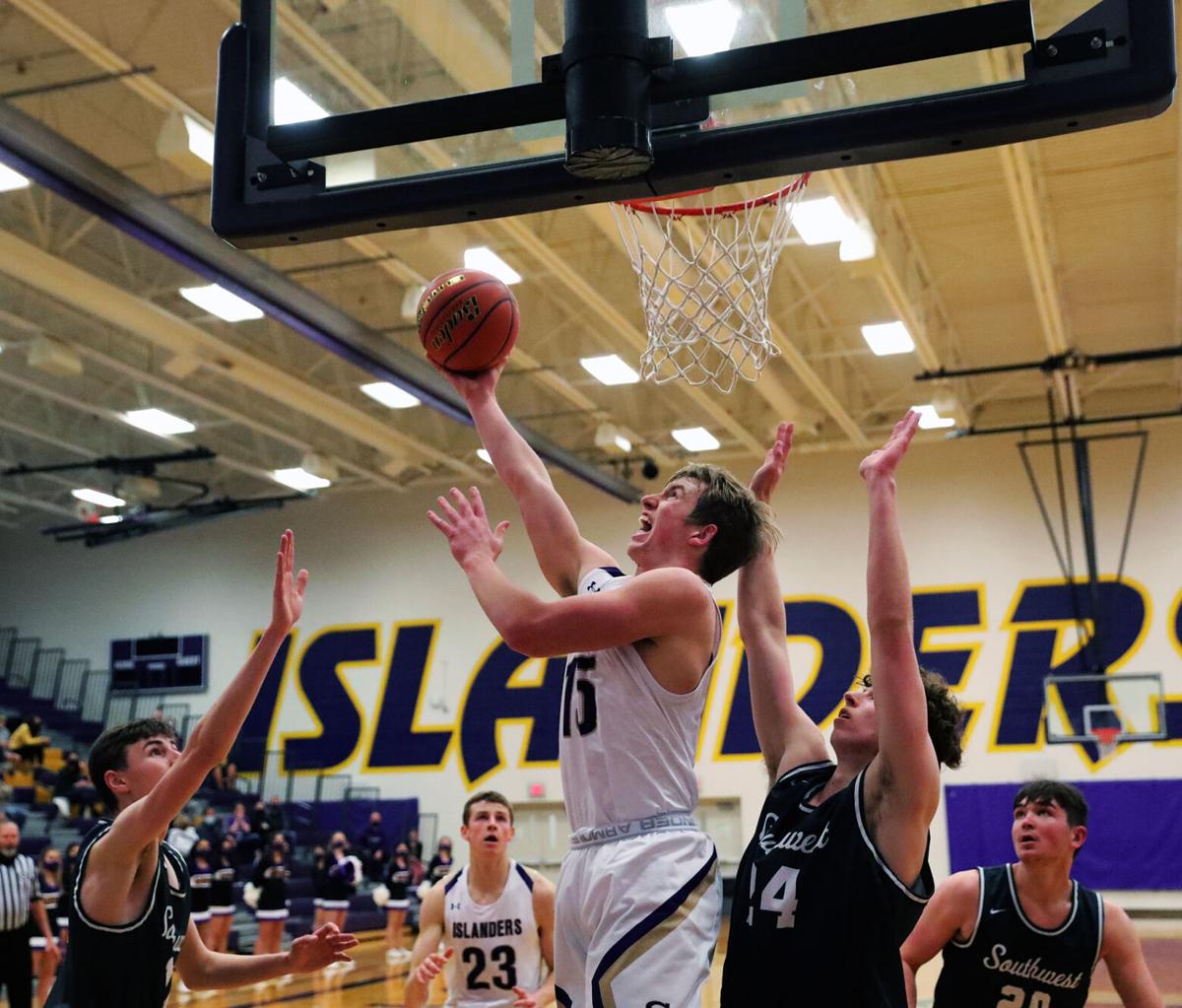 Grand Island's Kytan Fyfe puts up the go ahead layup in the fourth quarter of Saturday night's game against Lincoln Southwest. The Islanders won 45-40. (Independent/Josh Salmon) 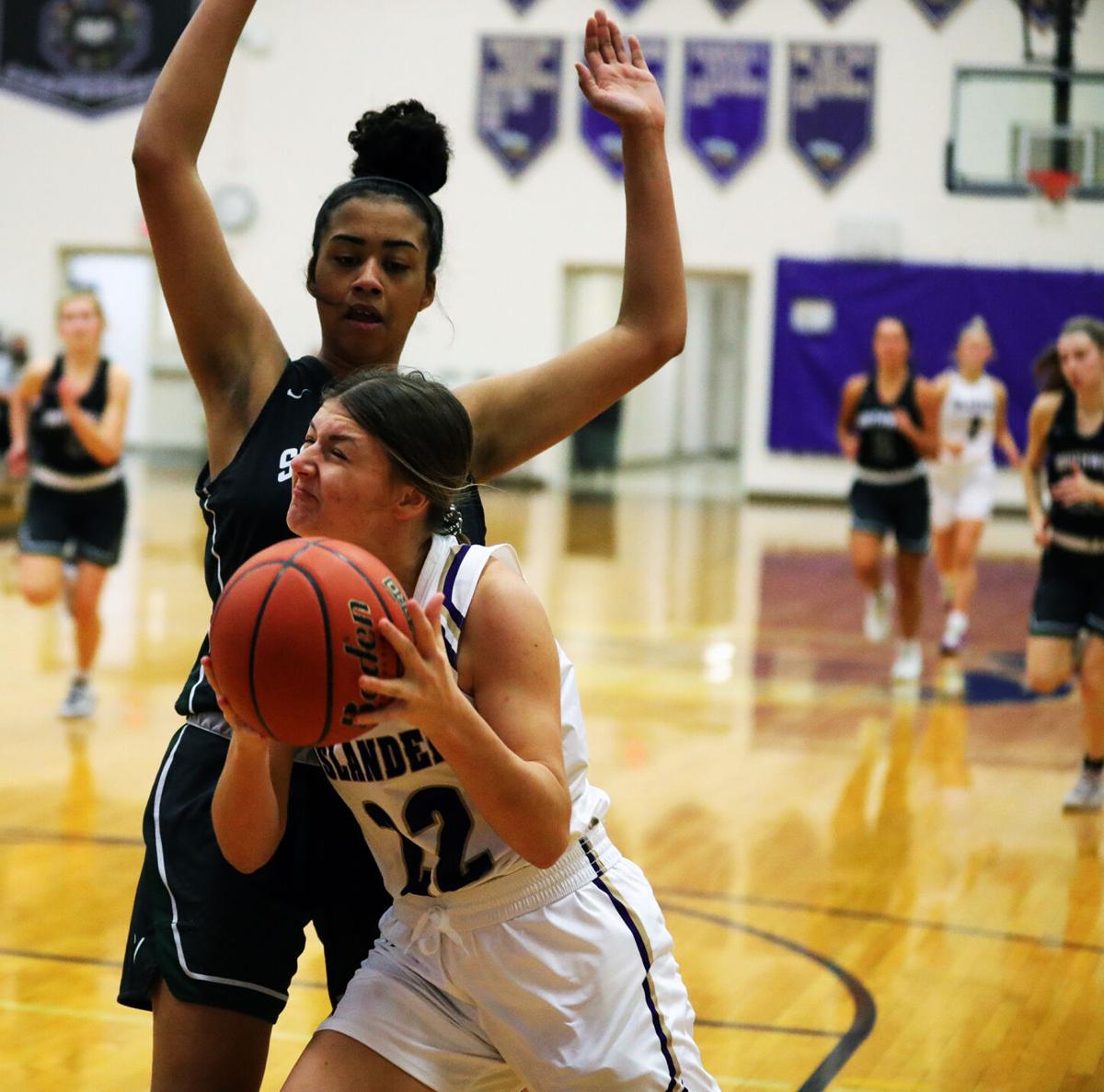 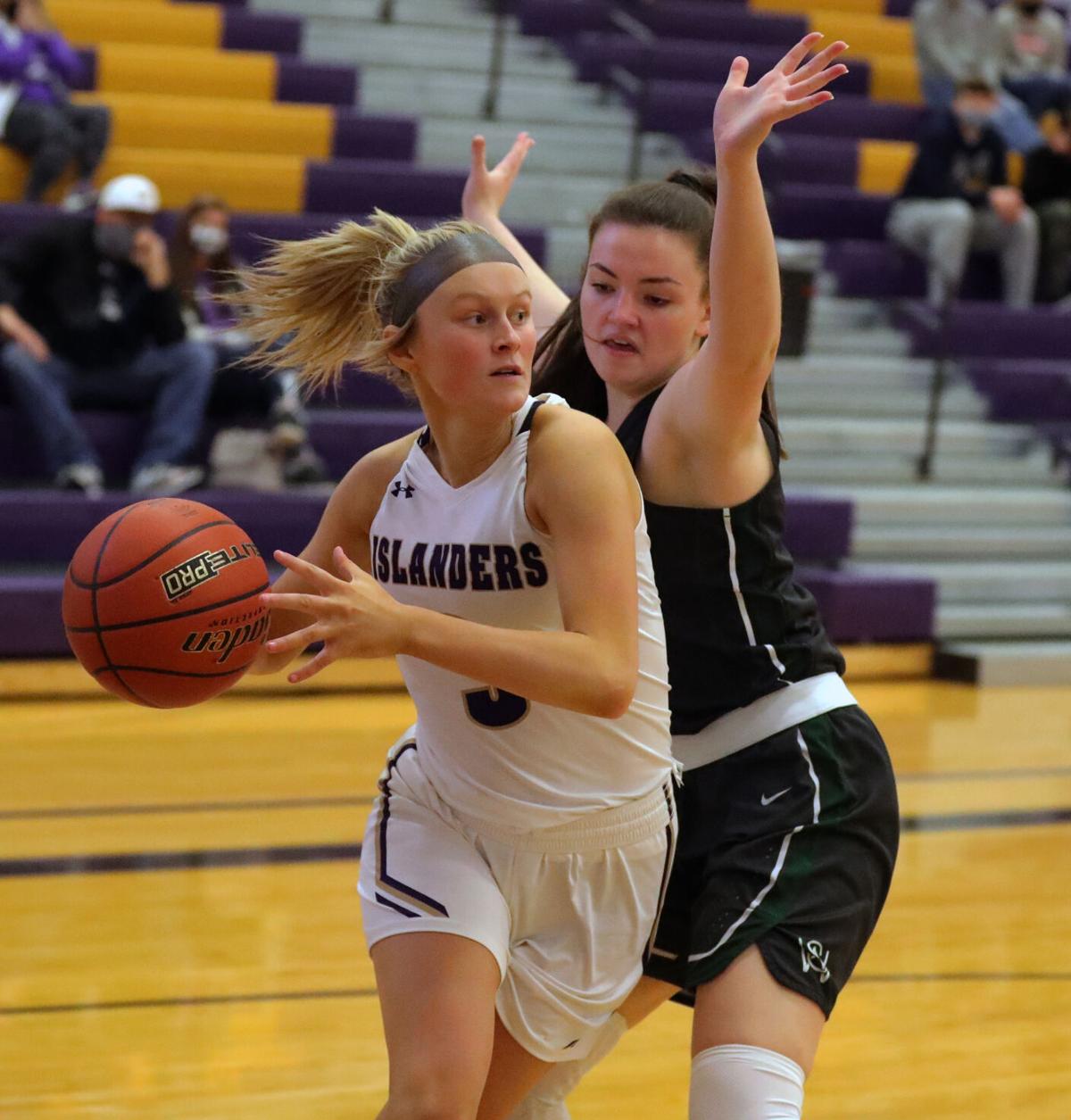 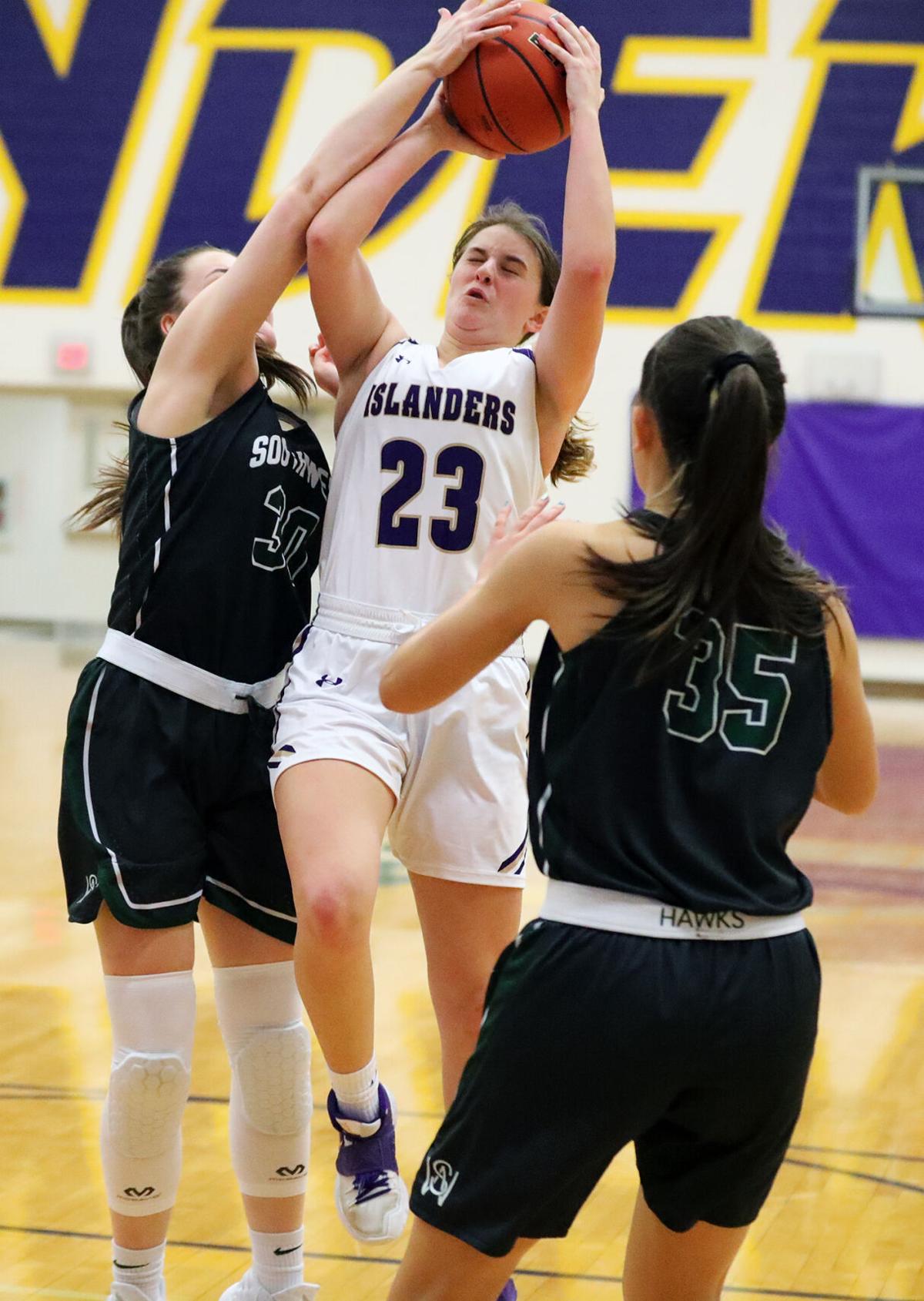 Grand Island Senior High’s knack for winning the close games continued Saturday, and that even came with Isaac Traudt not putting up a point over the final three minutes.

Dylan Sextro made back-to-back big plays on opposite ends of the court and Jacob Nesvara and Aiden Klemme each hit two free throws to help the Islanders clinch a 45-40 win over Lincoln Southwest.

Grand Island (7-2) improved to 5-0 in games decided by five points or fewer, including two wins over the Silver Hawks (2-4).

“The makeup of our team is going to put us in a lot of these games regardless of our opponent,” Islanders coach Jeremiah Slough said. “We’re going to be in grinder type games in the fourth quarter, and we have to find ways to win.

“We had some guys step up in the fourth quarter. Dylan Sextro made some big-time, game-winning plays then Nesvara and Klemme go to the line and make four free throws in the final minute.”

Kytan Fyfe scored on an inbounds play to give the Islanders the lead for good with 2:22 remaining.

Then Sextro drove the lane to give Grand Island a 41-38 cushion with 1:26 remaining.

“Isaac posted up and I caught it,” the 6-foot-6 junior said. “(The defender) kind of gave me the middle and I drove and just took it.”

Sextro followed that up with a blocked shot on the other end.

“It’s the details,” he said. “That’s what we’ve been working on all week. The details and the small things are the biggest things for us.”

Nesvara’s free throws with 52.4 seconds left pushed the lead to 43-38 and Klemme hit two more with 26.4 seconds to go after Jared Bohrer scored for Southwest.

Sextro said the Islanders are confident they’ll find some way to win the close ones.

“Every game it’s someone different,” he said. “We’ve just got to do our thing — obviously get the ball to Isaac. But tonight we saw something different. He got double-teamed a lot, so other people had to step up. That was the biggest thing.”

Traudt finished with 17 points and 11 rebounds. But the 6-9 junior — who added Kansas to his collection of NCAA Div. I offers during the week — had a much tougher time than during his 33-point performance in the first meeting with the Silver Hawks.

“The first time we played Southwest they played Isaac pretty much straight up and he had a field day,” Slough said. “We figured we’d see something different, but we didn’t know for sure what it was.

“They threw a double team on us at halfcourt every time he brought the ball across, and that caused us some fits. We just hadn’t seen that. Our other guys haven’t had to play in space in those moments, and I don’t think we handled it well and Isaac didn’t handle it well. When teams do that, he has to turn his mindset to ‘I’ve got to get 8-10 assists.’”

Lincoln Southwest struggled shooting all game long, going 14-for-56 (25.0%) overall and 5-for-27 (18.5%) on 3-pointers. But the Silver Hawks regularly got two or three shots per possession while dominating on the offensive boards.

“They got trounced (Friday) night (by Lincoln Pius X 77-36) and I don’t think they played very well,” Slough said. “I knew from their energy in warmups that they were going to give us a heck of an effort.

“We talked about it in pregame that we had to match their intensity right off the bat, and we didn’t do a very good job of it. I thought they outworked us on the boards all night long.”

“I felt we controlled the first half outside of giving up a bunch of offensive rebounds,” Slough said. “We were fortunate that they kept missing threes and shot it poorly. But we had a 19-11 lead there, and we got tired and we got lazy in transition.”

Grand Island answered in the third quarter with a pair of Traudt baskets. After Southwest regained a 28-26 lead, Traudt hit a free throw and Aidan Keyes came off the bench to swish a 3-pointer from the left corner to put G.I. up 30-28.

“I’m proud that he had himself ready to go,” Slough said.

Grand Island hosts Lincoln East Tuesday in a game that was postponed from December when the Islanders faced COVID-19 issues.

The Los Angeles Lakers are reportedly looking to add talent around stars LeBron James and Anthony Davis following their first-round loss to the Phoenix Suns in the Western Conference playoffs.

Maybe these things just have a life cycle.

He was a firm, essential voice of reason during the most brazenly racist presidency in generations.

The Milwaukee Bucks beat the Phoenix Suns in their first NBA championship since 1971. See the highlights in photos and video.

GISH senior Aiden Klemme shoots a long 3-pointer in the second half of their 45-40 win over Lincoln Southwest. (Independent/Josh Salmon)

Grand Island's Kytan Fyfe puts up the go ahead layup in the fourth quarter of Saturday night's game against Lincoln Southwest. The Islanders won 45-40. (Independent/Josh Salmon)