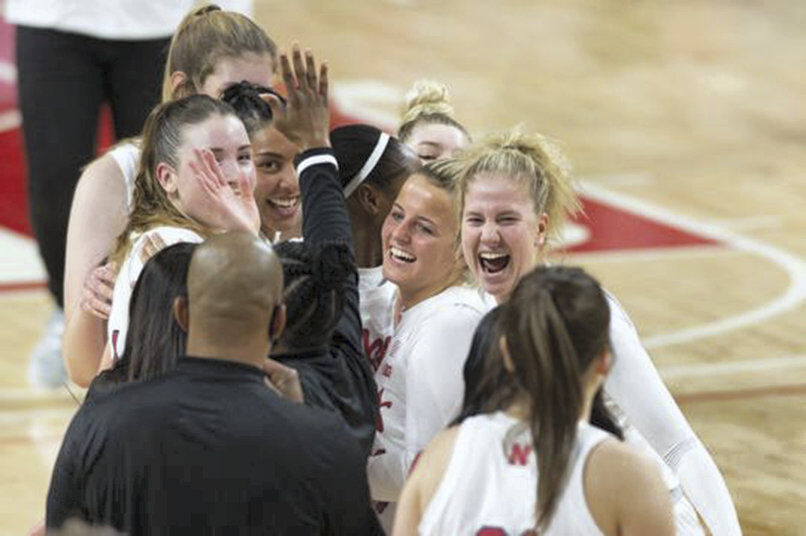 Nebraska celebrates after its win against Rutgers at Pinnacle Bank Arena in Lincoln on Sunday. 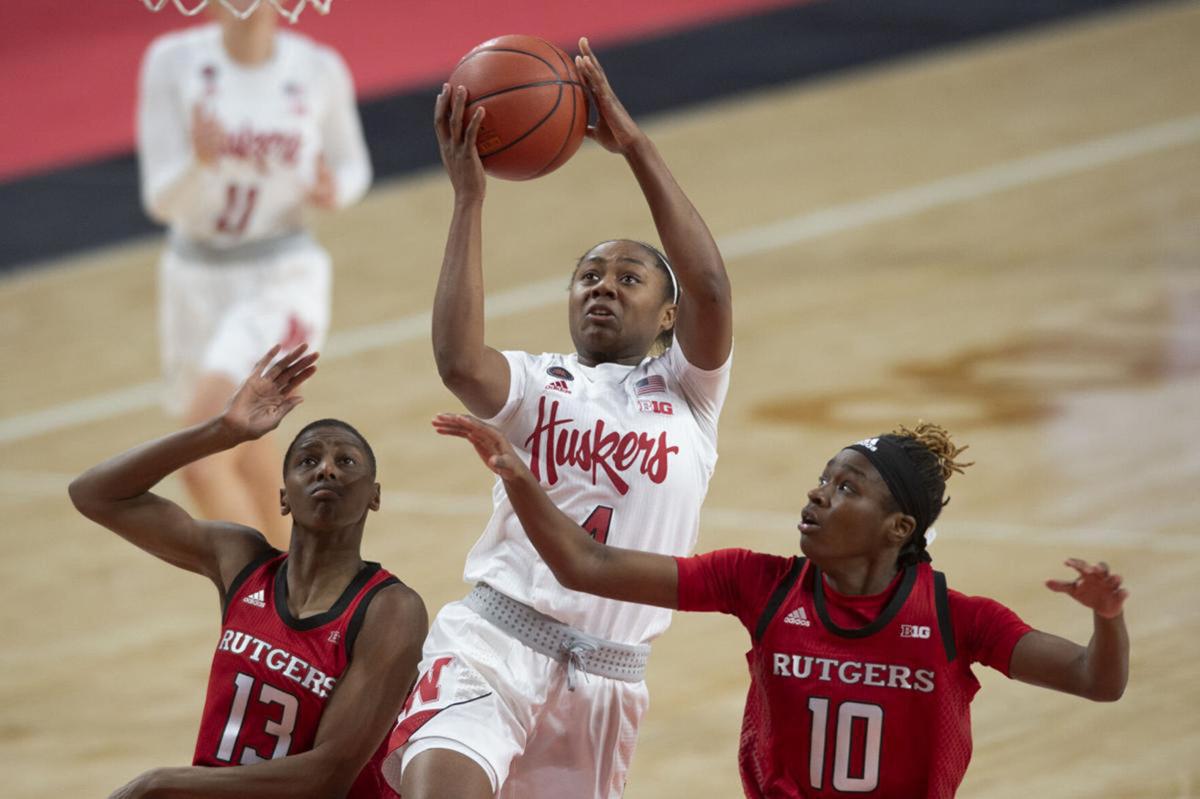 Nebraska’s Sam Haiby goes for a layup against Rutgers’ Mael Gilles (13) and Erica LaFayette at Pinnacle Bank Arena in Lincoln on Sunday.

LINCOLN — On a basketball team it’s often the top scorer who gets the headlines and appearances on the highlight reel.

But when the team retreats to the locker room after the game, it’s usually areas like defense and rebounding that earn praise from coaches and teammates.

That player getting the praise for the Nebraska women’s team Sunday was Isabelle Bourne, when Nebraska went back to the locker room and celebrated a 53-50 win against Rutgers at Pinnacle Bank Arena.

In a close defensive game — there were 11 lead changes — Bourne was the MVP.

Bourne got the tough assignment of guarding Rutgers’ Arella Guirantes for most of the game. Guirantes is the leading scorer in the Big Ten and scored 34 points in her last game.

But Bourne and the Huskers held Guirantes to a massive 16 points under her season average. Guirantes finished with eight points. She didn’t score until 17 minutes into the game and missed 21 of 24 shots from the field.

That defense went all the way to the finish, with Bourne stopping Guirantes on two shot attempts in the final 30 seconds of the game when Rutgers only trailed by one point.

If Guirantes has just a little more success on offense, Rutgers may have had enough to win. But instead the Huskers were able to complete a massive week that also included beating No. 15 Northwestern. The Huskers improved to 5-3, and 3-2 in the Big Ten.

Bourne said she felt the love in the locker room. When you hear the opponent’s best player scored just eight points, it’s a feeling of accomplishment.

“I was just happy, and it kind of boosted my confidence again to know that I can guard the perimeter in future games when I need to step up and do that for my team,” Bourne said. “It was a team effort. But it’s exciting for me.”

Bourne’s size, athleticism and intelligence made her the best option to guard Guirantes. If the scouting report says Nebraska can’t give up a baseline drive to a player, Bourne is going to do all she can to make sure it doesn’t happen, Nebraska coach Amy Williams said.

“For the most part it was a pretty special individual effort from Bourne — and a great team (effort) — and that’s what it takes to slow down a pro like Arella Guirantes,” Williams said.

Bourne, who also scored 11 points and had a career-high 12 rebounds, said she got a lot of help from center Kate Cain on defense.

“A lot of their shots wouldn’t have gone the way they did without Kate’s high hands,” Bourne said. “Even if she’s not blocking shots, the way she affects them, I think is huge for our team. And then people coming in and rebounding, especially Bella (Cravens), after she sees that Kate has left her man, and kind of jumping in and rebounding and boxing out Kate’s man. It’s really a team effort from everyone.”

“We thought it was going to take an incredible, special defensive effort to get a win, but I really didn’t dream that we’d hold them 35 points below their average,” Williams said.

Sam Haiby scored 16 points to lead the Huskers, including six points during Nebraska’s 9-0 run in the fourth quarter when Nebraska took the lead for good. Haiby also scored the game winner when the Huskers beat Northwestern on Thursday.

Ashley Scoggin added 11 points for the Huskers. Nebraska didn’t make a three-pointer for the opening 25 minutes of the game, missing all 11 attempts. But then Scoggin made back-to-back threes 30 seconds apart in the third quarter, and Whitney Brown made another three a short time later. Also key to winning was Nebraska’s nine makes on 11 free-throw attempts.

How could the rest of the Bucks Nets series shape out?

How could the rest of the Bucks Nets series shape out?

NBA Finals: What is the best result for the books?

NBA Finals: What is the best result for the books?

Nebraska baseball is fresh and ready for Fayetteville Regional

FAYETTEVILLE, Ark. — Nebraska may not be the favorite in the Fayetteville Regional. But it is certainly the freshest.

Nebraska stays alive by forcing deciding game with No. 1 Arkansas

FAYETTEVILLE, Ark. — Nebraska didn’t play a perfect game. But the groans inside a sold-out Baum-Walker Stadium gave away a finish that was mor…

Nebraska celebrates after its win against Rutgers at Pinnacle Bank Arena in Lincoln on Sunday.

Nebraska’s Sam Haiby goes for a layup against Rutgers’ Mael Gilles (13) and Erica LaFayette at Pinnacle Bank Arena in Lincoln on Sunday.