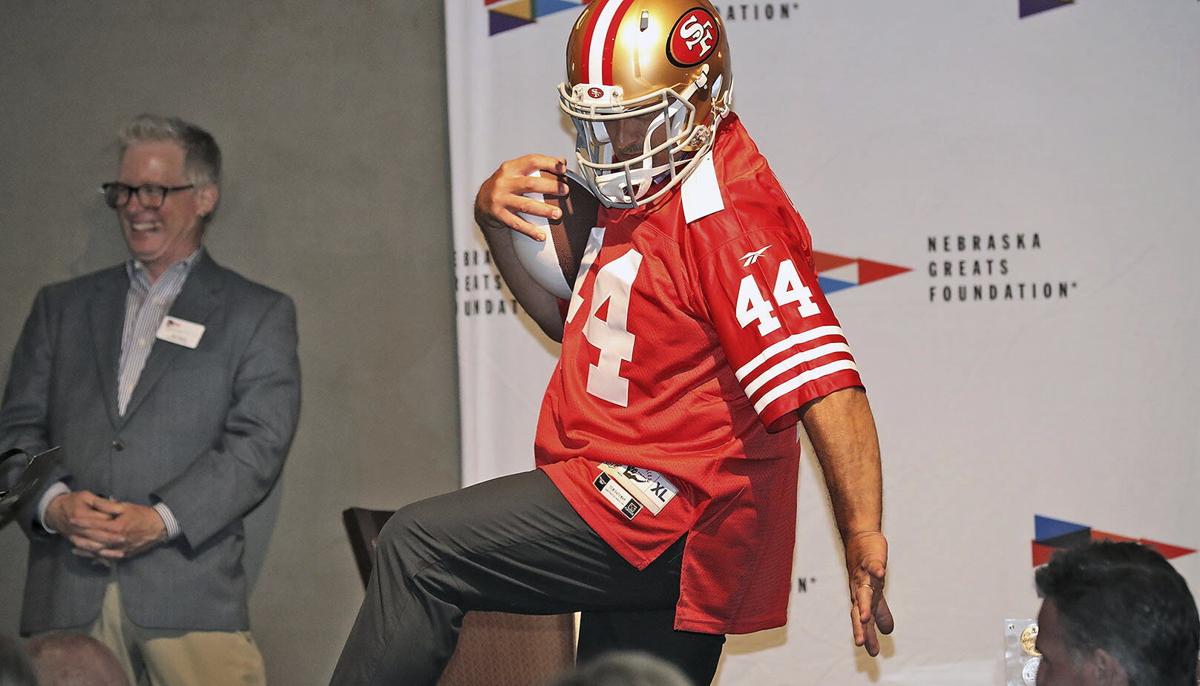 Native Grand Islander Tom Rathman strikes a pose in one of his jerseys and helmet that was being auctioned off during Thursday nights, "Evening with Tom Rathman" event at Riverside Golf Club. The benefit was to raise funds and awareness to Nebraska Greats Foundation. (Independent/Josh Salmon) 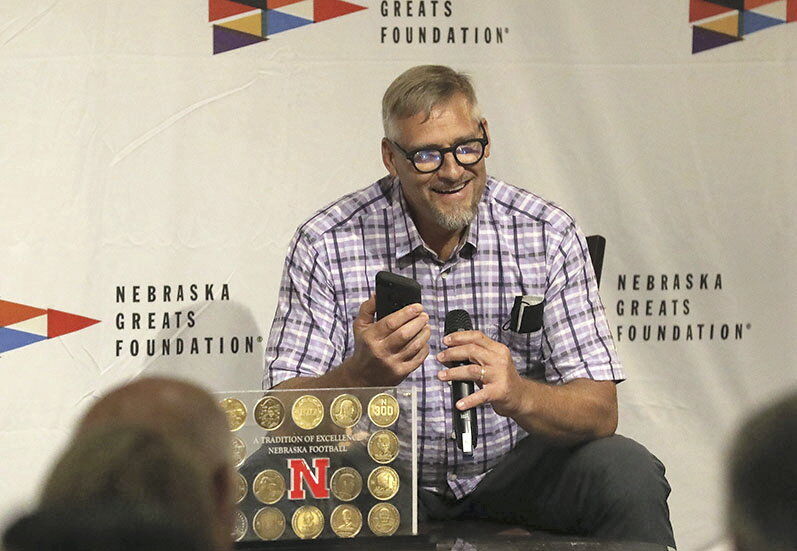 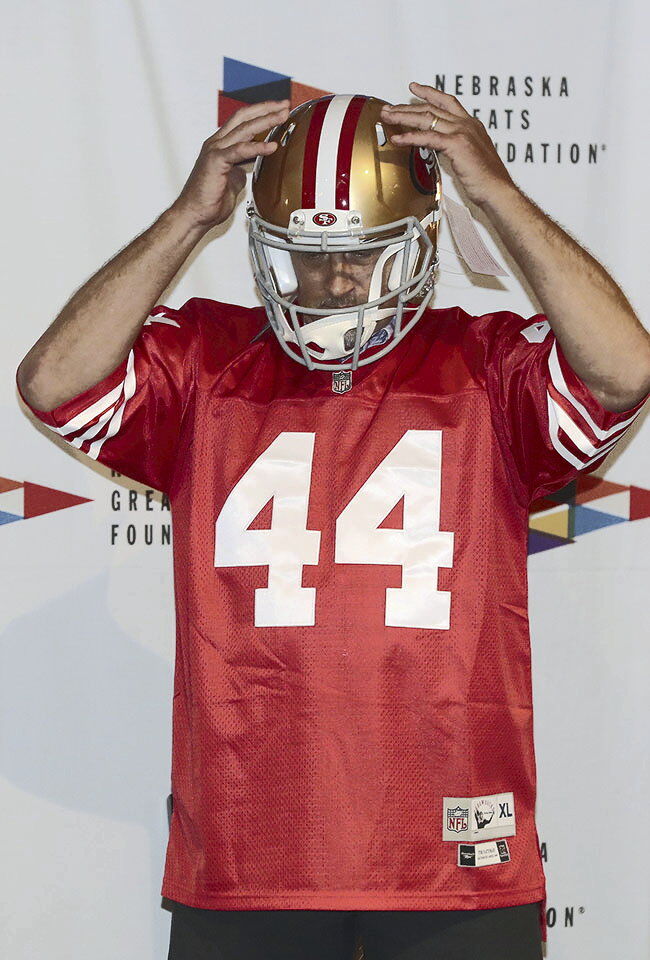 Native Grand Islander Tom Rathman models one of his jerseys and helmet that was being auctioned off during Thursday nights, "Evening with Tom Rathman" event at Riverside Golf Club. The benefit was to raise funds and awareness to Nebraska Greats Foundation. (Independent/Josh Salmon)

Tom Rathman was more than happy to be back in Grand Island.

While coming back to see his family, Rathman and his wife Holly took part in the Nebraska Greats Foundation event “An Evening with Tom Rathman” Thursday at Riverside Golf Club.

The foundation is a nonprofit organization founded by Jerry Murtaugh, who was a linebacker on the Nebraska national championship team in 1970. The organization is dedicated to helping former college athletes from any university in the state who need medical or emergency assistance.

Rathman said it was great to be back in Grand Island as well as be part of the Nebraska Greats Foundation event.

“It’s great to see my parents and all my relatives,” Rathman said. “I don’t get back to Grand Island very often. The community is still important to me.

“When the Nebraska Greats Foundation contacted me, there was no hesitation on my part. I wanted to get involved in that and help them raise some money.”

There was also an auction and a silent auction on Husker memorabilia that took place during the evening, as well as videos from people who have benefited from the Nebraska Greats Foundation, including former Husker Tim Wurth and former Wayne State player Drew Caskey.

Master of Ceremonies Jim Rose, executive director of the Nebraska Greats Foundation and part of the Husker Sports Network, spoke with Rathman and his wife during the event.

Rathman talked about his days of competing in football in high school at Grand Island Senior High, college at Nebraska and in the NFL for the San Francisco 49ers.

Just like many kids in the state of Nebraska, Rathman said he wanted to play football for the Huskers. He was recruited by a lot of other schools. Rathman said he didn’t send any letters back as he committed to Nebraska after his junior year.

“I dreamed about playing Nebraska football,” Rathman said. “I remember those 1970 and 1971 teams that won the national championship along with some other great teams that they had and their history. I knew I wanted to be a part of that.”

Rathman went on to have a successful football career for the Huskers, where he set the single-season rushing record for a fullback (885 yards) in 1985. As a senior, he averaged 7.5 yards per carry before being drafted as the 56th pick of the NFL Draft.

He said that former Nebraska assistants Mike Corgan and Frank Solich taught him to be a hard-nosed player.

“They just told me to leave it out on the field and be the hammer and not the nail,” Rathman said. “Just keep attacking and play until the whistle.”

He talked about his days in the NFL, especially while playing for the 49ers, where he was the lead blocker for teammate Roger Craig. Rathman won two Super Bowls (XXIII, XXIV)

During a video they showed Rathman playing in the NFL, where he was considered by many to be one of the many underrated players in not only in 49ers history, but NFL history.

Rathman talked about what it was like to play with the NFL greats like Joe Montana, Jerry Rice, Dwight Clark and Craig.

“We all just challenged each other and it made us better players,” Rathman said.

Rathman went on to coach at the high school level at Junípero Serra High School, the same high school current NFL quarterback Tom Brady attended, in San Mateo, California. After that, he began coaching in the NFL as a running backs coach with the 49ers in 1997. He also coached for the Raiders, the Detroit Lions and the Indianapolis Colts. He retired from coaching this past January.

Rathman said he had his way of coaching.

“I’m old school and I’m not going to change. If you’re working with me, it’s about old-school football,” Rathman said.

Rathman said he wouldn’t have had the success he had in football if not for the coaches he played for — including Fischer at Grand Island, Tom Osborne at Nebraska and Bill Walsh at San Francisco.

“I’ve been fortunate my whole career from the high school level to the college level and to the professional level where I’ve been surrounded by good people,” Rathman said. “I think if you have great coaches, you are going to be great players.

“If you have both those things, you are going to have a great system and a great team. That was part of equation as I grew up in Nebraska.”

The Tom Dinsdale Automotive Nebraska Greats Golf Classic, which will have around 20 Nebraska celebrities including Rathman, takes place Friday at Riverside Golf Club with a shotgun start at noon. Before that, there will be an autograph session with the celebrities that includes current Nebraska football players Austin Allen and Cam Jurgens, which will run from 10-11 a.m.

Proceeds from the event will go to the Nebraska Greats Foundation.

Three Keys to the Game: Nebraska at Oklahoma

Is Sean Payton an early frontrunner for Coach of the Year?

Is Sean Payton an early frontrunner for Coach of the Year?

Native Grand Islander Tom Rathman strikes a pose in one of his jerseys and helmet that was being auctioned off during Thursday nights, "Evening with Tom Rathman" event at Riverside Golf Club. The benefit was to raise funds and awareness to Nebraska Greats Foundation. (Independent/Josh Salmon)

Native Grand Islander Tom Rathman models one of his jerseys and helmet that was being auctioned off during Thursday nights, "Evening with Tom Rathman" event at Riverside Golf Club. The benefit was to raise funds and awareness to Nebraska Greats Foundation. (Independent/Josh Salmon)