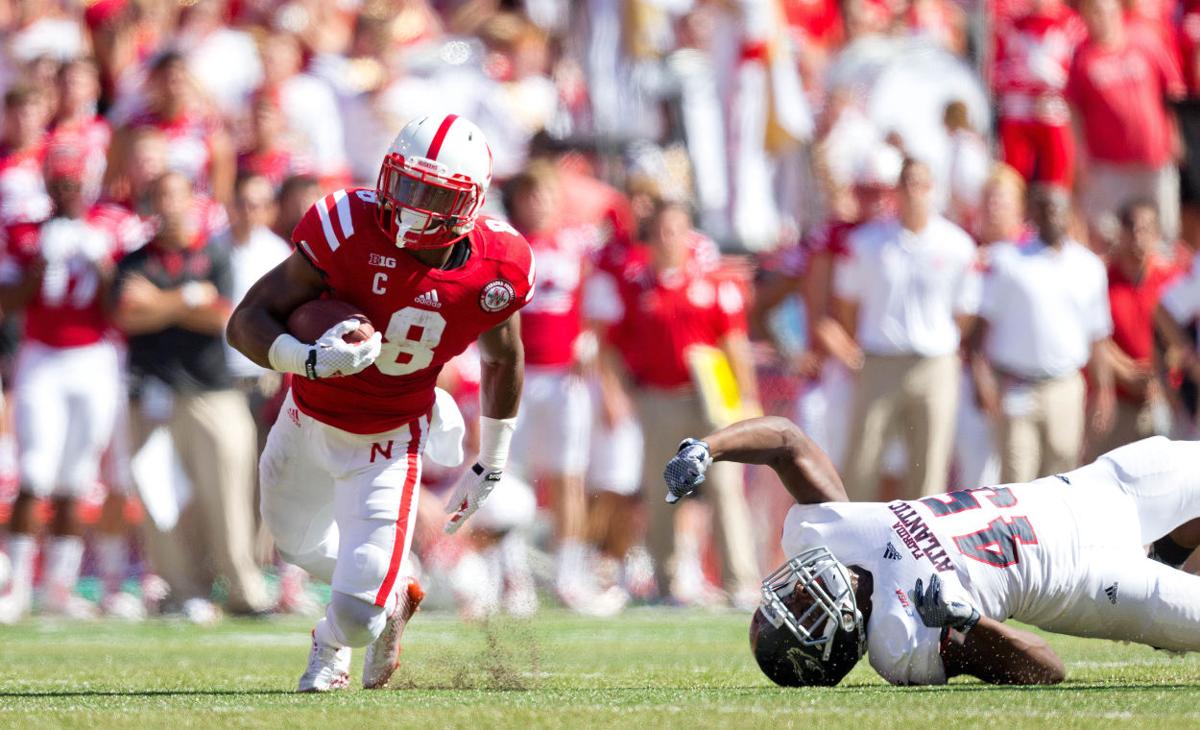 Nebraska’s Ameer Abdullah (8) breaks a tackle by Florida Atlantic’s Andrae Kirk (45) on a second-quarter run during their game Saturday at Memorial Stadium in Lincoln. Abdullah ran for a career-high 232 yards in Nebraska’s 55-7 win. 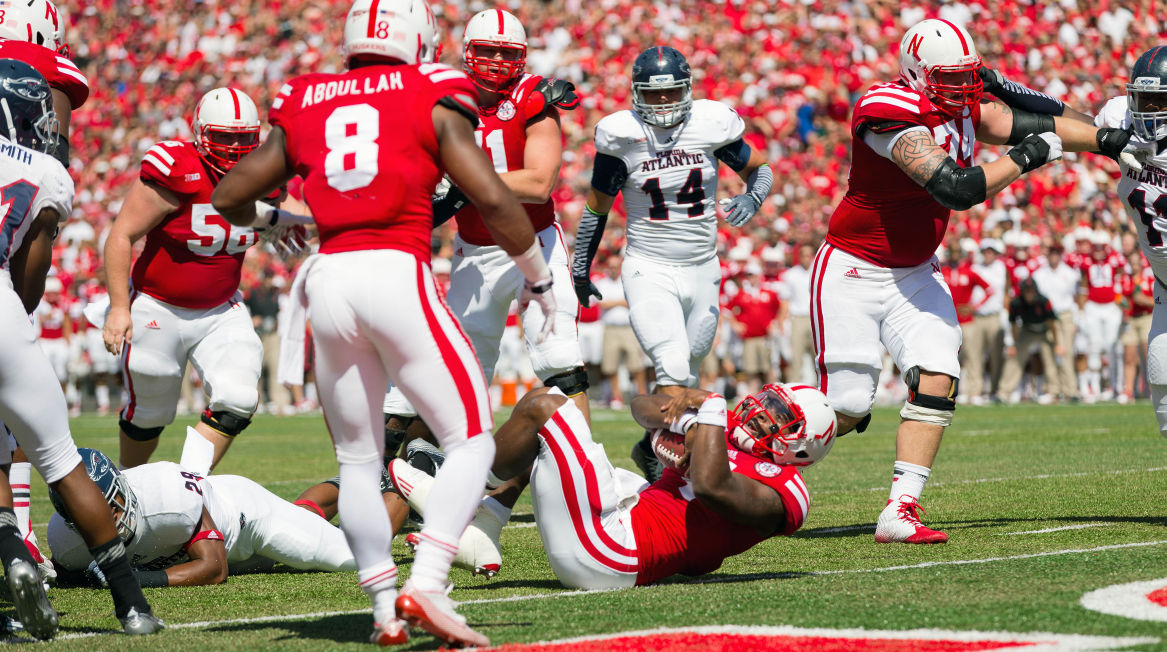 Nebraska quarterback Tommy Armstrong Jr. (4) rolls into the end zone in the first quarter of the Huskers’ game Saturday against the Florida Atlantic Owls at Memorial Stadium in Lincoln.

LINCOLN – The Nebraska football team got it rolling early and often.

The Huskers rolled up 784 total yards and saw four players have career days en route to a 55-7 win over Florida Atlantic on Saturday at Memorial Stadium.

The 784 yards was the fifth-most in school history and the most ever in the history of the Big Ten Conference. Also, Abdullah went over the 3,000-rushing career mark with 3,209 yards. He was the eighth Husker player to go over 3,000 career yards.

For the most part, Nebraska coach Bo Pelini said he liked what he saw out of the offense, especially out of Armstrong and Abdullah.

“I thought we were pretty efficient on offense,” Pelini said. “I thought Tommy got better as camp went on and I thought that showed today. He put some balls right on the money. I thought he threw the ball well and managed the offense well. And Ameer is special and I’ve been saying that. He can run inside, run outside. He’s a special player and a good running back. I think we showed that we have some other guys that can tote the ball that do a pretty good job too.”

Armstrong said he felt comfortable with the offense the moment he stepped out onto the field.

“We were on the same page from the start of the game,” Armstrong said. “We all knew exactly what we wanted to do. We wanted to move the chains. We just had to be ready for anything. Sure we had some mistakes here and there but that’s expected.

“And Ameer just went out there to prove that he was the best back in the nation. I believe that he is. Overall, I thought we handled ourselves the right way.”

The defense meanwhile gave up 75 yards and a touchdown on Florida Atlantic’s first possession. The Owls used 11 plays, capped by a 20-yard touchdown pass from Jaquez Johnson to Lucky Whitehead. But after that, the Owls only managed 125 yards the rest of the game.

“We did some nice things to keep them off balance on that first drive,” FAU coach Charlie Partridge said. “But it was a struggle for our defense to get off the field after that.”

Nebraska scored on its first series of the season. It burned almost six minutes, resulting in a 13-play drive as Armstrong scored on a 4-yard run to cap it.

After the Florida Atlantic score, the Huskers responded. Armstrong completed five passes for 60 yards to the ensuing possession, ending with a 36-yard touchdown pass to Westerkamp for a 14-7 lead.

The Huskers scored on its first possession of the second quarter, using a nine-play drive that resulted in a Drew Brown 44-yard field goal to put Nebraska up 17-7.

Florida Atlantic missed a chance to cut into the lead as Greg Joseph missed a 45-yard field goal. Nebraska took advantage as Abdullah busted loose for a 47-yard touchdown run. Imani Cross completed the first-half scoring on a 3-yard run in leading 31-7 at the break.

The Huskers rolled up 446 yards in the first half, with 262 of those coming on the ground.

Nebraska did not let up after that. After Florida Atlantic went three-and-out on its first series, the Huskers needed some luck to help keep their drive alive as Westerkamp reached back behind him and caught the ball for a 16-yard reception.

“That was a crazy play,” Westerkamp said. “I saw the ball get tipped, so I just put my hands back and the ball just landed perfectly in my hands. It was pretty much luck on that play.”

Pelini agreed with Westerkamp on being a crazy play.

Nebraska took advantage. Six plays later, Newby took it in from 2-yards out.

The Huskers scored two more touchdowns and also got a 45-yard field goal from Mauro Bondi from there on out. Armstrong threw an 8-yard pass to De’Mornay Pierson-El in the third quarter and Newby completed the scoring on a 1-yard run.

Kenny Bell put up some numbers as well with four catches for 116 yards, including a 63-yard reception, to bring his career reception yardage total to 2,018 yards. That makes Bell the third player in Nebraska history to have over 2,000 yards receiving.

One of the pluses for the Husker offense was that it did not turn the ball at all during the game and did not fumble the football, which pleased Armstrong.

“We did a great job taking care of the ball,” he said. “Coach (Ron) Brown and Coach (Tim) Beck always stresses to make sure we take care of the football. When we do that, today is the kind of results we are going to get.”

The Huskers were also penalized six times for 60 yards, but had only one penalty after the first quarter.

Pelini said there are still a number of things the Huskers need to improve but thought the win was a good start for the Huskers as they prepare this week for McNeese State, set for 11 a.m. Saturday at Memorial Stadium.

“I saw a lot of good things out there and a lot of bad things out there,” Pelini said. “There are definitely some things we need to get fixed out there. But I thought we did what we should have done. There’s a lot out there for us and we got to play a lot of guys today. I was pleased with the effort.”

After having a successful career at Chambers-Wheeler Central, Diane Kasselder decided she wasn’t done coaching.

A majority of the big plays were generated by Aurora during Friday’s rivalry district showdown with Northwest.

The Indians claimed the title by 26 strokes over second-place Columbus Scotus and had three medalists in the process.

Gene Chinander, the father of Nebraska defensive coordinator Erik Chinander, was killed in a one-car accident Thursday in Iowa.

Gene Chinander, the father of Nebraska defensive coordinator Erik Chinander, was killed in a one-car accident Thursday in Iowa.

Nebraska’s Ameer Abdullah (8) breaks a tackle by Florida Atlantic’s Andrae Kirk (45) on a second-quarter run during their game Saturday at Memorial Stadium in Lincoln. Abdullah ran for a career-high 232 yards in Nebraska’s 55-7 win.

Nebraska quarterback Tommy Armstrong Jr. (4) rolls into the end zone in the first quarter of the Huskers’ game Saturday against the Florida Atlantic Owls at Memorial Stadium in Lincoln.