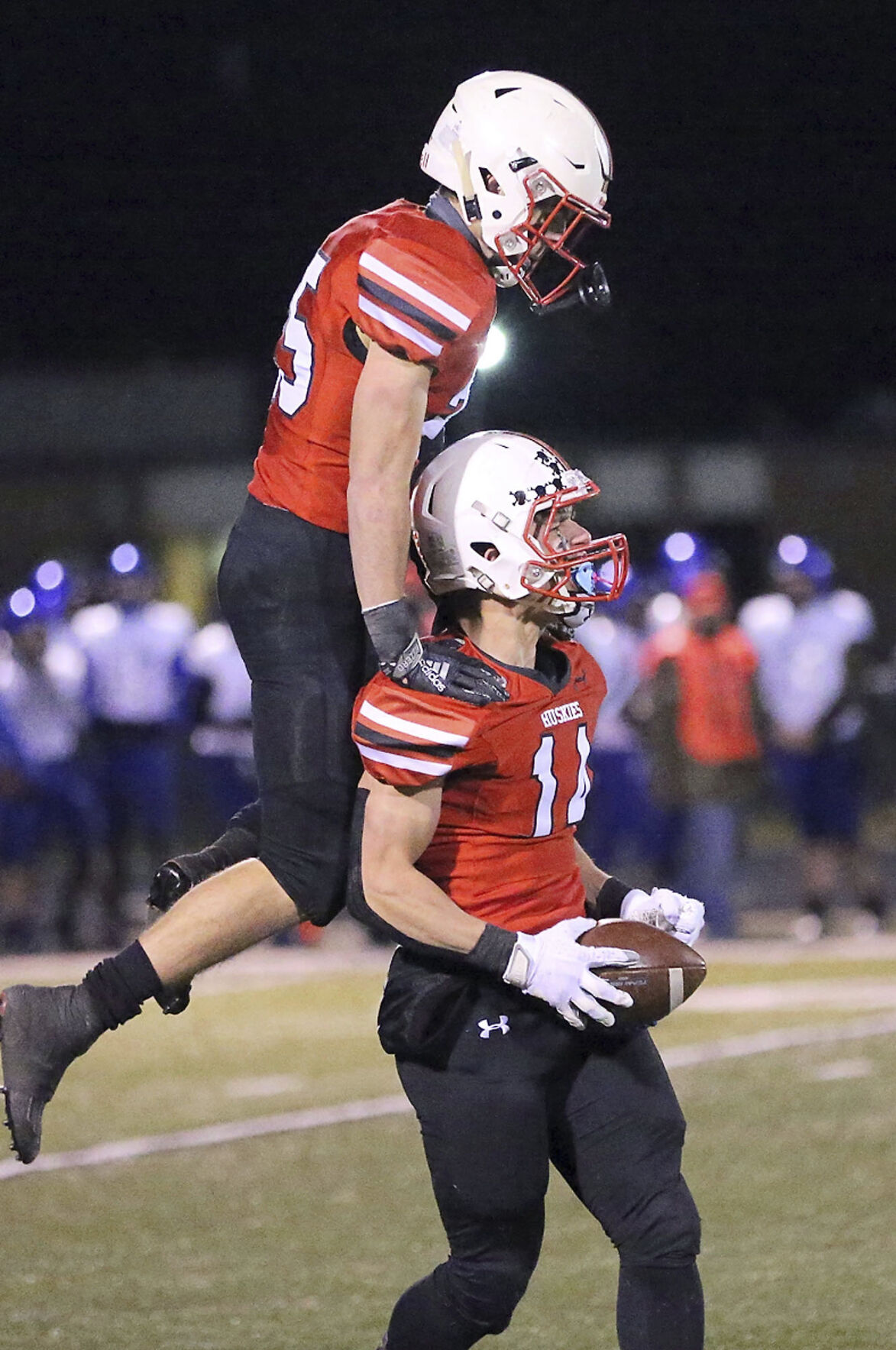 Jameson Herzberg jumps on the back of Bryce Barger, celebrating a fumble recovery. The Huskies took on the Plattsmouth Blue Devils in the State semi-finals. (Independent/Carissa Soukup) 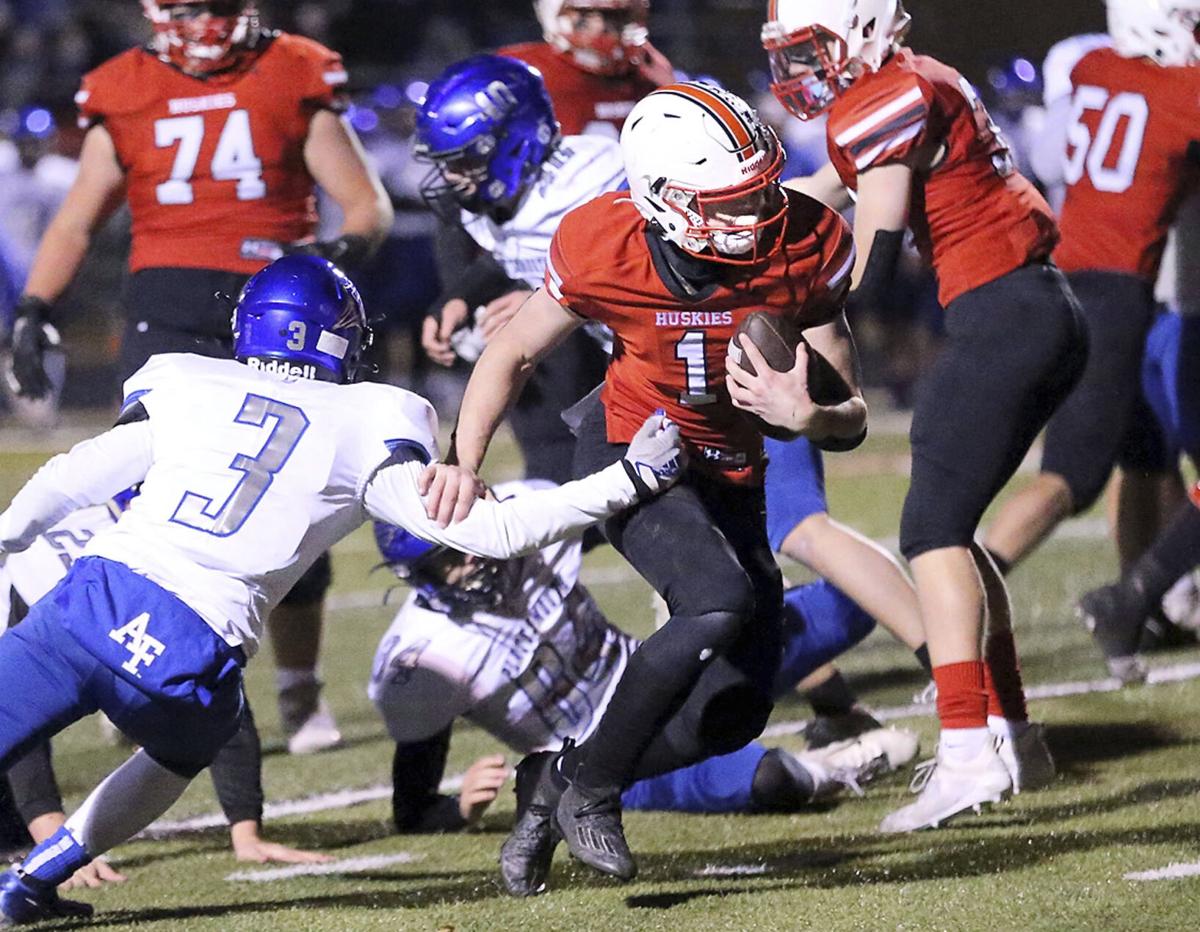 Aurora's Ethan Shaw runs the ball upfield for the first touchdown of the game. The Huskies took on the Plattsmouth Blue Devils in the State semi-finals. (Independent/Carissa Soukup)

AURORA — Once 0-2 on the season, Aurora now has an opportunity to add to its trophy case.

The No. 8-rated Huskies generated five takeaways to overcome four turnovers of their own during a 21-12 victory over No. 6 Plattsmouth Friday night in the Class B state football playoff semifinals. Brady Collingham’s 22-yard interception return for a touchdown all but sealed the win for Aurora with 4:08 remaining.

Now, the Huskies (9-3) will be making the program’s eighth appearance in the state championship game. Aurora won Class C-1 in 2018 and captured back-to-back Class B state titles in 2008 and 2009.

“We played a really hard schedule and that prepared us and kind of hardened this team,” said Aurora coach Kyle Peterson, whose team opened the season with a narrow home loss to Class A state playoff qualifier North Platte. “We learned to win close and we learned to win ugly.

“We overcame adversity and found a way tonight.”

Finding a way to win for the Huskies included fumble recoveries by Bryce Barger and Britton Kemling as well as a pair of interceptions by Jameson Herzberg prior to Collingham’s pick-six. Clinging to a 14-12 lead, Aurora tipped a Jack Alexander pass attempt and the ball landed in the arms of Collingham, who dashed into the end zone.

“It’s super exciting,” Collingham said of his first career defensive TD. “I was just hoping not to trip on the way there.”

“I told the kids that there were three things that were going to make us successful tonight and that was: stop the run, stop the run and stop the run,” Peterson said. “We did a really good job of that and we were able to make Plattsmouth a little bit one-dimensional on offense and then we were able to bring some pressure, which led to things like the pick-six.

“That’s just kids making plays. They were in the right positions and they took advantage of their opportunities.”

Four lost fumbles hampered Aurora’s offensive attack. Quarterback Ethan Shaw got the Huskies off to a good start, capping a nine-play opening drive with a 10-yard TD run to put his squad ahead 6-0 with 8:40 left in the first quarter after the point-after kick failed.

Shaw finished 13 of 21 passing for 118 yards and a TD. The senior also rushed 14 times for 49 yards and a score and averaged 52.7 yards on three punts, including a 71-yarder in the first quarter that rolled to the Plattsmouth 3-yard line.

An Aurora fumble recovery at the Blue Devils’ 29 eventually led to a 5-yard TD pass from Shaw to Jacob Settles on a fourth-and-goal play. Mack Owens added the two-point conversion run to make it 14-0 with 6:15 left before halftime.

A lost fumble by the Huskies at their own 12 led to Plattsmouth’s first TD. Meneses scored on a 3-yard plunge, but the PAT kick missed, leaving Aurora with a 14-6 lead with 3:20 remaining in the second quarter.

Peterson said his team was fortunate to be able to overcome four turnovers.

“Those were things we hadn’t done a lot of, quite honestly, but Plattsmouth does that to you,” Peterson said. “They put pressure on teams like that and they kind of force you into some of those errors that we made tonight. That’s a credit to them and it’s something we need to work on fixing.”

Plattsmouth converted another Aurora fumble into points when Alexander connected with Adam Eggert on a 28-yard TD pass on fourth down with 7:28 to play. However, Alexander’s pass to Brayden Zaliauskas in the end zone for the two-point conversion was overthrown and the Huskies maintained a 14-12 advantage.

Aurora managed to flip the field on its next possession and Shaw’s 33-yard punt pinned the Blue Devils at their own 6 with 4:21 to play. Two plays later, Collingham’s interception return helped send the Huskies into the state finals.

That’s quite a turnaround from an 0-2 start.

“We knew it was going to be a challenge and that we had to be a lot more physical,” Collingham said. “We knew we had a lot of people doubting us and I think we all just played with a chip on our shoulders and we wanted to prove everybody wrong. That’s what we did tonight.”

Said Peterson: “Our kids, each and every week, got better. We developed an identity, which was something we could hang our hats on when we got into games like this, and we really performed well tonight.”

Aurora travels to Elkhorn (10-2) for next Friday’s championship game. The Antlers defeated Hastings 33-28 in the other semifinal. Aurora and Elkhorn were the only two teams to defeat the Tigers this season.

Jameson Herzberg jumps on the back of Bryce Barger, celebrating a fumble recovery. The Huskies took on the Plattsmouth Blue Devils in the State semi-finals. (Independent/Carissa Soukup)

Aurora's Ethan Shaw runs the ball upfield for the first touchdown of the game. The Huskies took on the Plattsmouth Blue Devils in the State semi-finals. (Independent/Carissa Soukup)