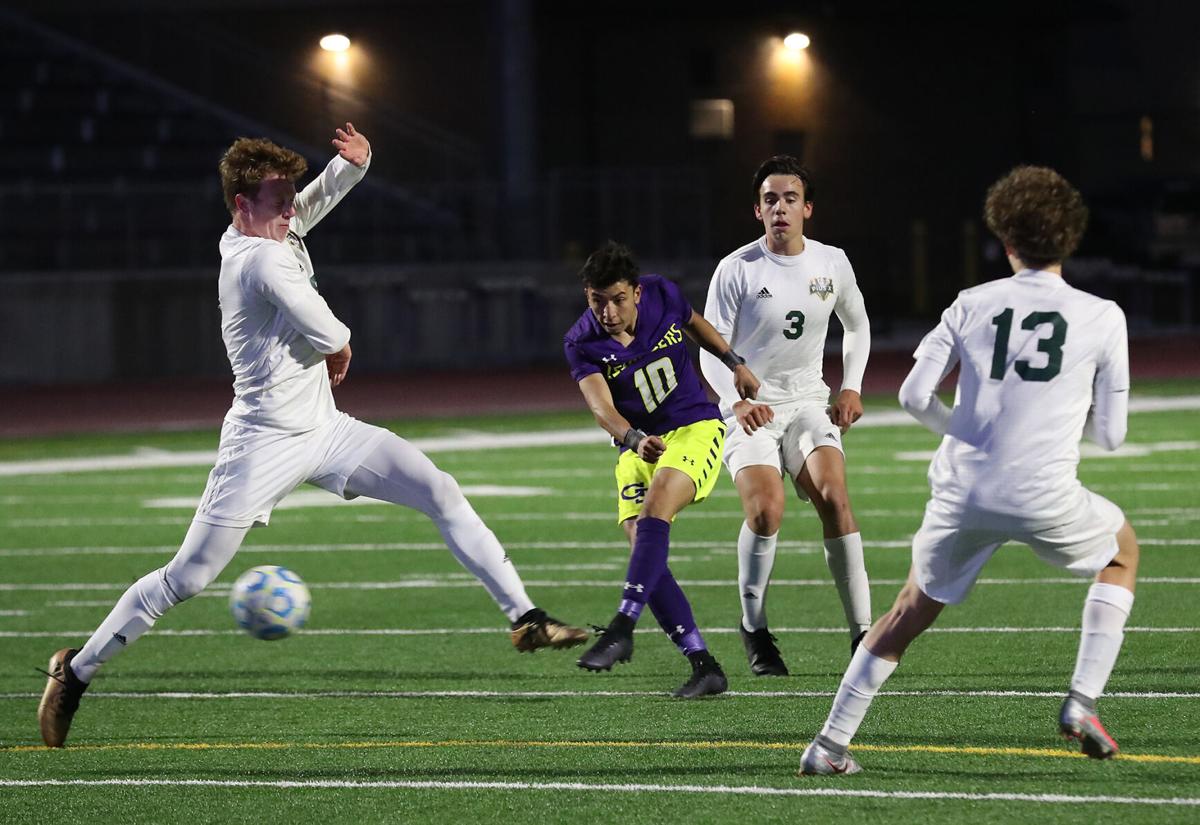 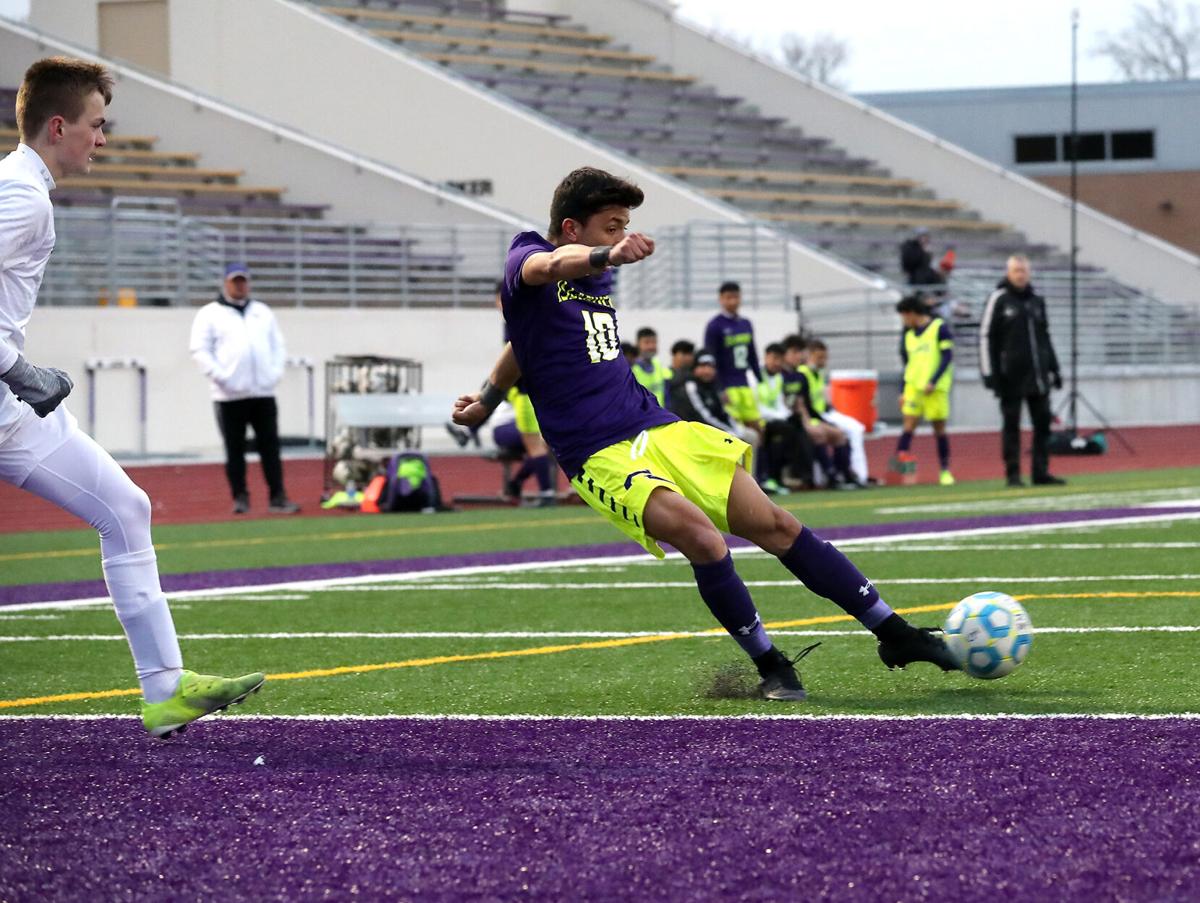 Javier Baide recorded a hat trick within a 20-minute span of the first half to lead the Islanders to a 6-1 victory over Lincoln Pius X at Memorial Stadium.

“We’ve had two losses this year where we’ve had 1-0 defeats, and in both of those we’ve had all kinds of opportunities to score,” Grand Island coach Jeremy Jensen said. “So really what we talked about was finishing. That was the message after the Lincoln High game.

“We missed a penalty (kick), hit a post, missed three 1-on-1s and then lost 1-0. So it felt like the (Lincoln) Southeast game all over again. So we stressed the finishing aspect of it.”

Baide certainly helped in that department against Pius (4-6).

Just 20 seconds later, Baide assisted on a Diego Salas goal to extend the Grand Island lead to 4-0 before halftime.

“Javy was Javy today,” Jensen said. “It was definitely something we needed tonight.”

Morgan Armagost converted on a penalty kick at 48:29 to get the Thunderbolts on the scoreboard.

It took 13 seconds for Baide to answer on a 25-yard laser kick for his fourth goal.

“It was a team effort,” Baide said of his big night. “Most of my assists were from Diego (Salas) and a couple other teammates. Most of my goals were pretty lucky. One of them was just off the 20 and I hit it.”

Kevin Aguilar flew down the field and fired a perfect kick into the net to wrap up the scoring with just over 10 minutes remaining.

Baide said the Islanders (5-4) wanted to come back with a strong performance.

“The last game our downfall in my opinion was that we were too confident against Lincoln High, which played pretty well against us,” he said. “We wanted to give our all tonight and then get ready for tomorrow.”

Grand Island still finds itself searching from some consistency.

“We struggle in possession and with attacking sometimes, and that’s my fault,” Baide said. “I kind of rush a lot of things. We need to have more possession against good teams like Lincoln East. They’re a good team that we beat in a shootout two ye ars ago.”

Jensen said finishing seems to be the big difference on if the team is going to play well or struggled on a given night.

“I feel good about where we are defensively,” Jensen said. “We’re hard to break down. We’re moving things around. It sounds crazy since it’s the ninth game, but we’re still trying to figure out the midfield. We’ve got guys we’re plugging into holding midfield spots that we’re trying to give us minutes.”

Senior Tony Acosta moved forward in the midfield, so Jensen said the team wanted to be aware of any gaps that caused. The Islanders kept playing with three in the back, and they all performed well in the win.

Freshman Alberto Bermudez made his debut at goalkeeper for the first half and made a nearly point-blank save near halftime.

“We gave him a start and he made a big save,” Jensen said. “He plays well with his feet. He’s a converted midfielder, so I wanted to get him on there to give him an opportunity to get out there and play.

“Our goalkeepers should touch the ball more with their feet than they do with their hands, and he’s really good with his feet.”

Grand Island looks to keep its momentum going when it hosts Class A No. 7-rated Lincoln East in a rescheduled game Friday at 7 p.m.

What happens if the Suns do not have Chris Paul for the Western Conference Finals?

Is there any value in the National League East?

Is there any value in the National League East?

How do the Clippers adjust without Kawhi Leonard for Game 5?

How do the Clippers adjust without Kawhi Leonard for Game 5?

After leading Broken Bow to a state golf title and a state tournament appearance in basketball, Kelly Cooksley has been selected as the Independent's 2020-21 girls coach of the year.

It’s not how you start but how you finish.

Northwest to be well represented at NSWCA All-Star dual

Northwest will be well represented during the Nebraska Scholastic Wrestling Coaches Association all-star dual on Saturday.

Three city athletes will be on hand to represent Grand Island at the Shrine Bowl.

Girls co-coach of year: Following lead of his Pius X mentors, Ryan Psota leaving his own imprint with Bolts

Ryan Psota says, "We've had some really good long-term successful coaches here that I can take away a lot of knowledge from." He's not kidding.

Much like his fastball, Drew Christo knows only one speed. The Super-State captain will soon see where it takes him

Drew Christo has 15 to 20 pro scouts showing up for games. He's likely to be drafted next month. Then it's decision time: college, or pro ball?

Every GICC boy competing at the state meet earned at least one medal, and that helped the Crusaders claim a Class C runner-up trophy.

he Grand Island Unified Track and Field team found success from some of its athletes at the state track meet recently.