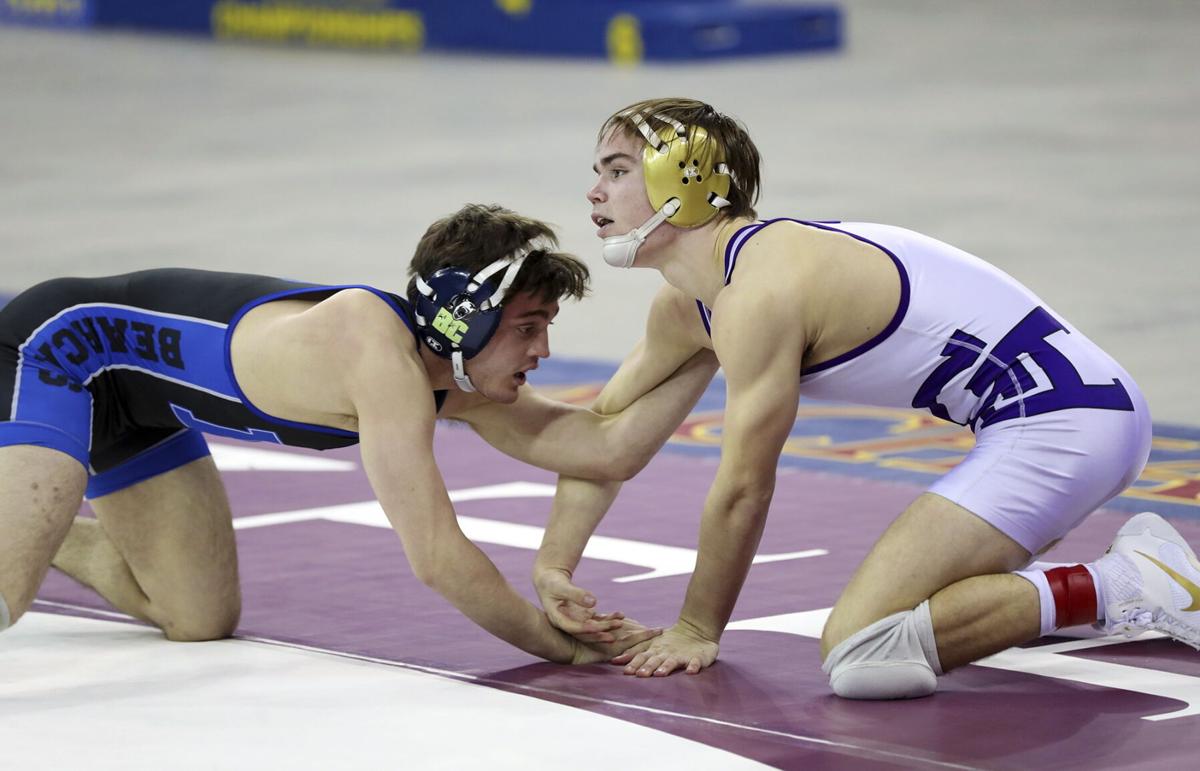 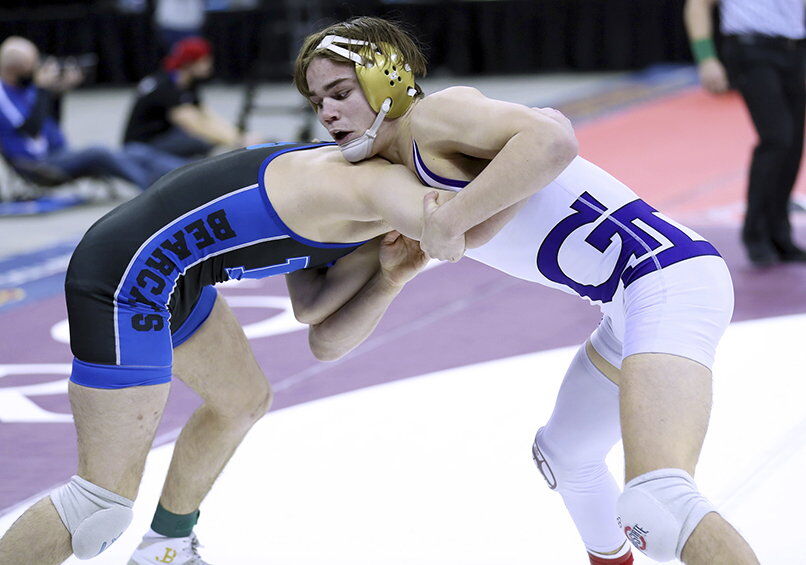 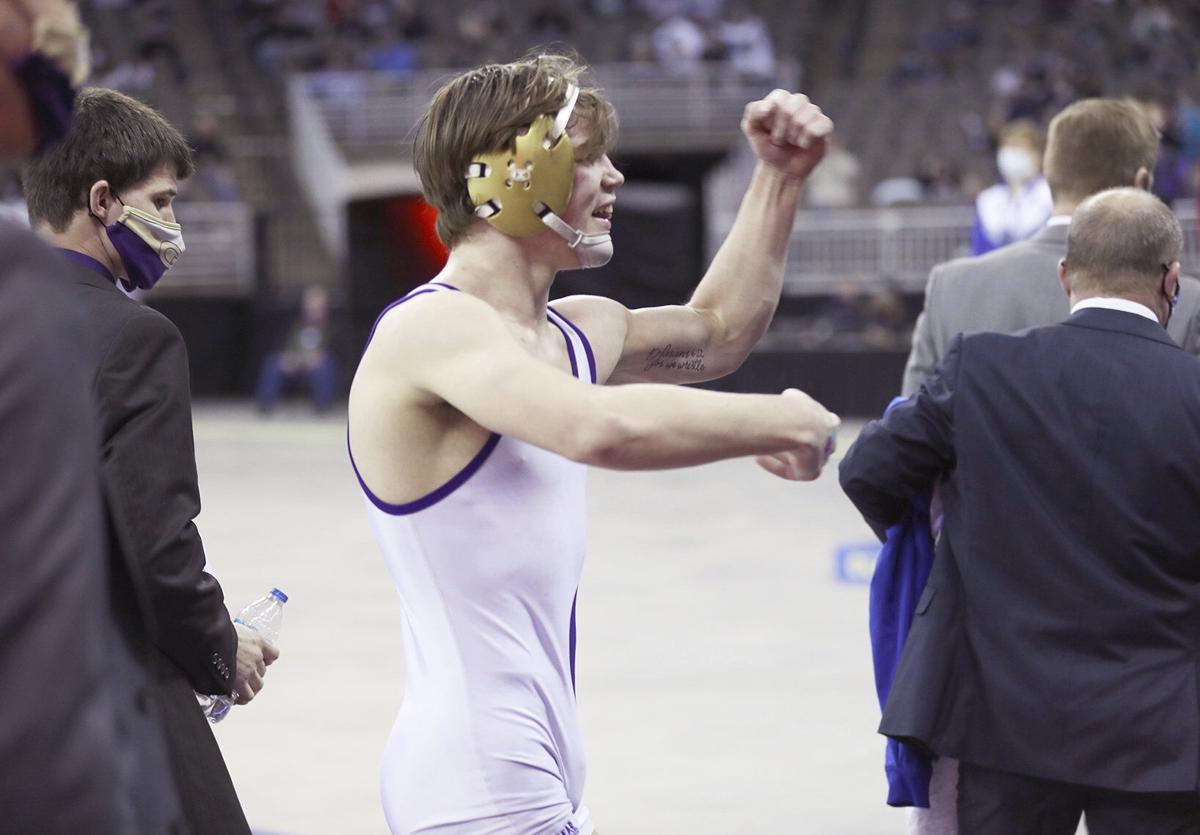 OMAHA – Brody Arrants got to go out how every senior would like.

As a state champion.

The Grand Island Senior High senior managed to do that by defeating Kearney’s Beau Hostler 2-1 in the 145-pound championship match Thursday at CHI Health Center Omaha.

“This (winning a state championship) is the best feeling in the world,” Arrants said.

That effort allowed the Islanders to finish third with 126.5 points during the two-day tournament.

“Brody is one of those guys who never misses practice,” he said. “He’s in the summer weight room and goes to camps to get better. He does everything right and has been a tremendous leader for us. It was nice to see him out on top. He’s one of the best kids I’ve coached.”

The match with Hostler was the deciding match between the two wrestlers. They were 1-1 against each other with Hostler winning the latest match 4-3 in the ultimate tiebreaker in both teams’ final dual of the season.

This time, Arrants got the upper hand as his two points were scored on an escape and the other on a penalty point where Hostler fled the mat on an Arrants shot attempt.

“I was able to chase him around so much that he was called for that,” he said.

Morrison said they had a different game plan for their matchup with Hostler.

“The first time we wrestled him, we hadn’t seen too much of them as we were able to get on top and pinning him. The second time he had a different shot for us and we weren’t ready for it. It was a close match as it went to overtime and we lost it,” Morrison said. “We made an adjustment and Brody is a smart person and he’s got a lot of experience. Brody did a nice job of executing in that match.”

Arrants said the loss at the dual, along with getting a sixth-place medal in last year’s tournament, were motivating to him.

“That last loss was big motivation and he was the only kid I lost to in Nebraska and I really wanted that one bad,” Arrants said. “And what happened last year after I won my first two matches to make the semifinals and didn’t win another match after that, I really did not want to go out like I did last year.”

Teammates Blake Cushing and Daylon Keolavone weren’t as fortunate in their championship matchups.

Cushing couldn’t defend his title with the same weight class that he won last year after he fell to Millard South’s Conor Knopick 2-1. Knopick scored a reversal with 1:47 left of the third period. Both of Cushing’s losses this season came to Knopick, who Morrison said is one of top wrestlers in the country.

Keolavone fell to Omaha North’s Tyler Stewart 3-1 in the 220-pound final. Stewart scored the lone takedown at the end of the second period.

“Blake has lost two 1-point matches to a kid that is one of the best in the country so I feel Blake is one of the top guys in the country too. He battled hard but fell short,” Morrison said. “Daylon was close too but he just lost his balance in giving up that takedown and sometimes it’s just one bad position that decides the match. But I’m proud of how they competed.”

The Islanders also brought home a few other medals as well.

Kolby Lukasiewicz lost his 160-pound semifinal match but bounced back to win the next two matches to finish third.

Also, Juan Pedro, Jr., and Rogelio Ruiz were the only Islanders to survive the consolation rounds. Both wrestlers went 1-1 in the placement matches as Pedro finished fourth at 113 and Ruiz took fifth at 132. Morrison said he felt the Islanders competed very well at the state tournament, even though they had a few setbacks during the tournament. Millard South won its third-straight title with 220.5 points, while North Platte was second with 136 points.

“I have to give North Platte credit, they have a nice team and they put together a great tournament as did Millard South,” Morrison said. “I did we did a good job down here. We had some guys win a match here and there. It was just a great team effort from everybody, not just the medalists but our other qualifiers as well.

Did Mike McCarthy buy himself some time?

Did Mike McCarthy buy himself some time?

Youth isn’t an excuse for Fullerton this season.

VOLLEYBALL NOTEBOOK: Broken Bow continues to ‘dive in’ during 7-0 start

The Broken Bow volleyball team doesn’t want to hold anything back in the 2021 season.